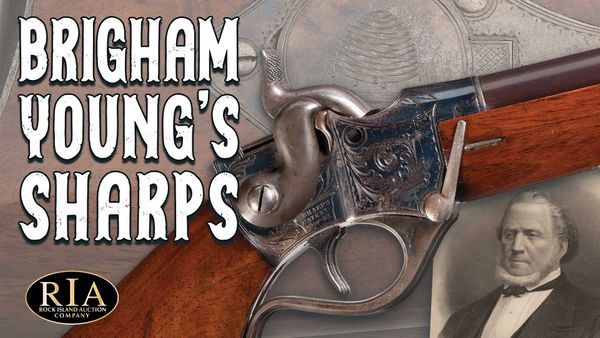 The beehive symbolizes the industry, harmony, order and frugality that Mormons required to build a community in the hostile environment of the West in the 1800s. It is used on buildings of Church of Jesus Christ of Latter-day Saints, the seal of the state of Utah, and two universities located there – including the university named after Brigham Young.

Young is a towering figure in American history and American religious history, known as “American Moses” and “Lion of the Lord” for leading the Mormon people westward to the Great Salt Lake Valley. He served as the Utah Territory’s first governor and as the second president of the Church of Jesus Christ of Latter-day Saints. It is only fitting that his rifle bears the image of a beehive.

The beehive motif on the pistol-rifle’s patch box lid in the stock is unquestionably a special order from the factory.

An engraved beehive adorns the patch box lid of the historic, C. Sharps & Company breach-loading percussion pistol-rifle owned by Young. One of only 550 manufactured, that makes it a rarity before its history and symbolism are considered. The Sharps will be available at Rock Island Auction Company’s Premier Firearms Auction, Dec. 3-5.

This isn’t the first of the Mormon legend’s weapons, with provenance to Young’s family, to be sold by Rock Island Auction.

Young, born in 1801, grew up in New York State where he trained as a carpenter, joiner, painter, and glazier. After hearing the testimony of a Mormon missionary, he was baptized into the Church of Jesus Christ of Latter-day Saints (LDS) in 1832.

A few months after his baptism, Young traveled to Ohio where he met LDS founder Joseph Smith. Young was ordained an apostle three years later. He went on 10 mission trips before leading the Mormons west, visiting Canada, Great Britain, and the eastern United States.

He settled with other church members in Missouri in 1837 only to find the Mormons weren’t welcome. The escalating nature of their confrontations in Missouri forced them out. That violence and anger they experienced from Missourians shaped the role of guns for Mormons who saw them as a defense toward freedom to practice their religion.

The Mormons fled Missouri to Illinois where they founded Nauvoo. A mob assassinated Joseph Smith there in 1844 and Young was elevated to president. As tensions grew between Mormons and other settlers in western Illinois, Young started looking for a promised land to the west. Church leaders learned about the Great Salt Lake Valley from journals and reports of trappers, explorers, and travelers.

The patch box lid detail on the stock of Brigham Young’s Sharps pistol-rifle. The detail is unquestionably specially ordered engraving from the factory.

Young led the first company west, first stopping along the Missouri River near Council Bluffs, Iowa in the fall of 1846. These winter quarters were home to 12,000 Mormons. In spring 1847, a small group charged with planting crops for those to follow set out across the muddy prairie. They were well-equipped with small boats, maps, scientific instruments, and farm tools. The group’s journey was relatively uneventful because of their preparation.

When the pioneers came out of the Wasatch Range to a broad valley, Young proclaimed “This is the right place.” They settled at the east of Great Salt Lake, and Salt Lake City was born. About 2,000 settlers arrived that year. Young and others immediately returned east to guide more people west. By 1850, nearly 16,000 settlers had settled in the Salt Lake Valley.

The federal government created the Utah Territory in 1850 and Young became its first governor and led it as a nation within a nation. Seven years later, the federal government became uncomfortable with the Mormons’ fealty to Young and opposed to the polygamy being openly practiced.  A new non-secular governor, along with a battalion of troops, was dispatched to replace Young.

Consider the history of persecution Mormons experienced. LDS founder Joseph Smith was tarred and feathered in the 1830s in Ohio. Mormons in Missouri were forced to relocate from one county to another in 1833. The Missouri governor ordered Mormons to be exterminated or driven out in 1838. In 1840, Mormons founded Nauvoo, Ill., where Smith was eventually murdered.

When the Mormon settlers learned that the U.S. Army was marching on Utah, they feared the worst.

Ultimately the “Utah War” was about Young’s governing the territory as a theocracy, the practice of polygamy, land ownership, and Indian affairs. Outside of Utah it was believed that Mormons weren’t trying to convert Indians but to gain their allegiance should things come to a head with the federal government.

Young activated the Utah militia to harass the troops as they worked their way toward Salt Lake City, burning supply wagons and stealing cattle from the Army. The Army sent more troops, and more militia were raised. The Army stalled and had to overwinter in Wyoming before proceeding toward Salt Lake City. That gave Thomas Kane, a friend of the Mormons from Pennsylvania, time to negotiate peace.

Detail of the engraving on Brigham Young’s Sharp’s pistol-rifle.

In the wake of the standoff, the Mormons accepted federal law, seen as a start toward statehood. Utah would finally become a state in 1896 after the LDS renounced polygamy in 1890. By the time Young died at the age of 76 in 1877, he had taken 55 wives.

As governor, Young oversaw water distribution and created irrigation districts in the arid valley. Farmers were required to maintain irrigation ditches and worked cooperatively to build dams and canals. Land wasn’t distributed until Young was assured that it received sufficient water.

Young remained president of the Latter-day Saints until his death in 1877, growing the church to 115,000 members. Young supervised the trek of between 60,000-70,000 settlers to the Salt Lake Valley and founded 400 settlements across six states before he died.

Considered a prophet to the LDS, Young established a diverse range of industries including cooperatives for sugar, textiles, livestock, a bank, and America’s first department store, Zion’s Cooperative Mercantile Institution. A proponent of new technology, he welcomed the telegraph and railroad lines to Utah.

Brigham Young and the apostles of the Church of Jesus Christ of Latter-day Saints, from `Harpers Weekly.’

Young’s pistol-rifle is a 1st Model, 2nd Type chambered for the .36 caliber Sharps “Extractor Arm” cartridge, serial number 79. It has a knurled band at the muzzle, scroll and border engraving on the frame, a burst pattern engraved on the receiver ring, light border engraving on the patch box and beehive, and checkerboard pattern on the lid.

Young’s family members did business with Sharps as shown by an order submitted in 1878 by one of his sons. Among the documentation provided for the pistol-rifle is a notarized letter from a direct descendent of Young’s stating, “The Sharps Pistol Carbine, #79 with Beehive engraved on the patch box was by family tradition, the property of Brigham Young.”

Worthy of a Mormon Prophet

Only 550 of the C. Sharps & Company breach-loading percussion pistol-rifles are estimated to have been made in 1857-1860 making it extremely scarce. The exquisite factory engraving that includes the beehive makes the weapon rarer still.

Heap on that the historical significance of its owner’s role in settling the west and the growth of the Church of Jesus Christ of Latter-day Saints. Young brought thousands and thousands of Mormons to not just Utah, but Idaho, Wyoming, and Arizona as well.

The Sharps pistol-rifle, owned by an American prophet, drips with the history of Mormons in America and their pioneer spirit. The weapon is available in Rock Island Auction Company’s Premier Firearms Auction, Dec. 3-5.

`A Huge Impact on Utah,’ Utah Division of State History

`The Brink of War,’ by David Roberts, Smithsonian Magazine

`Brigham Young: Fire in His Bones,’ by Ronald K. Esplin, The Church of Jesus Christ of Latter Day Saints

`The Symbolism of the Beehive in Latter-day Saint Tradition,’ by Val Brinkerhoff, BYU Studies Quarterly