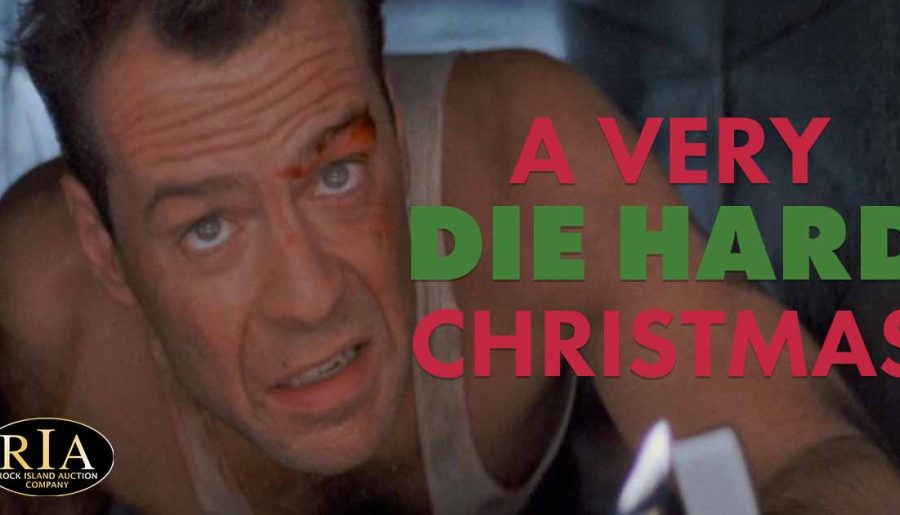 As we approach Christmas, we see it as a time of reflection, on the joys of life, love, work, and play.

Many argue it is a Christmas movie because it certainly shares the common themes found in Christmas movies as hero John McClane battles Han Gruber and his band of thieves. Let’s tick them off:

· Family is important in Christmas movies and they may begin with estrangement or separation but end with the joy of reuniting with loved ones.

·  A Christmas Party. “Got invited to the Christmas party by mistake. Who knew?” John McClane says to masquerading ring leader Hans Gruber. 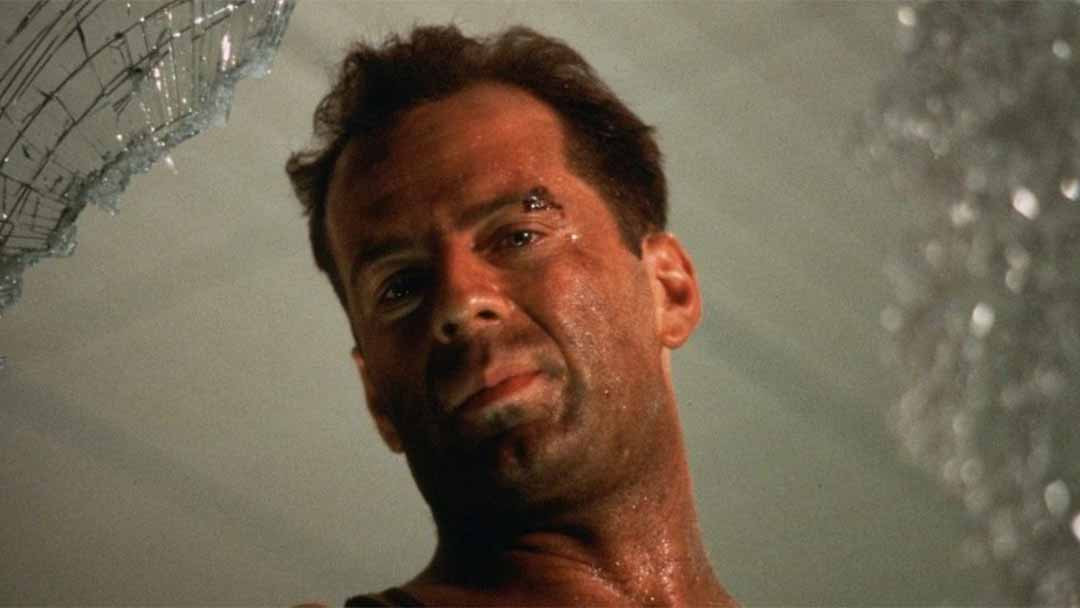 John McClane looks out over the mayhem he’s caused on Christmas Eve at Nakatomi Plaza. Is he pondering whether or not “Die Hard” is a Christmas movie?

“Die Hard” hits all of these. Is it a Christmas movie? Is it an action movie? It is definitely an action movie set at Christmas with a lot of guns. That’s why it’s a favorite at Rock Island Auction Company.

The film opens with John McClane arriving in Los Angeles to see his estranged wife and their children. As he pulls a bag out of the overhead compartment of the plane, a fellow passenger spots his Beretta 92F. McClane assures the passenger that he is a New York City cop. As was mentioned in a previous blog, the Beretta is the firearms star of the movie. The Beretta is there at the beginning and is there at a key moment at the end as McClane and his wife Holly (Holly! It’s Christmas!) are reunited.

Bad guys Hans Gruber and Karl also get ahold of the Beretta at various points in the film. John McClane hands the gun to Hans who says his name is Bill Clay when John McClane finds him checking explosives on the roof. Hans tries to shoot McClane only to learn the gun is unloaded.

The Beretta used by Bruce Willis in “Die Hard” is the same screen-used gun that Mel Gibson used in “Lethal Weapon” (also a Christmas movie/action movie set at Christmas) released the previous year. 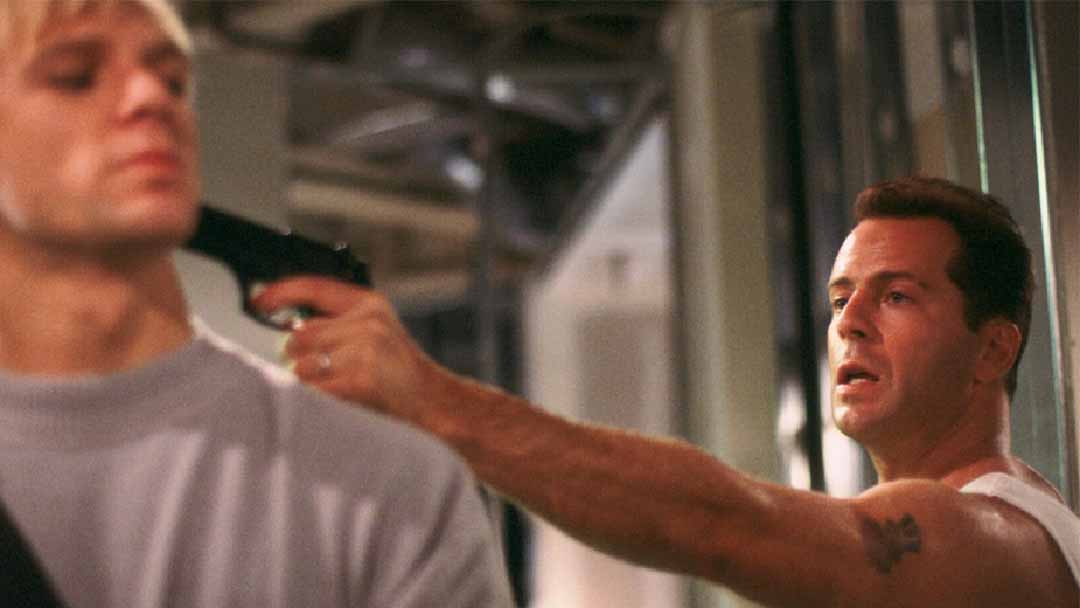 John McClane points his Beretta 92F at a bad guy in “Die Hard,” wanting to fill him with more than the Christmas spirit.

John McClane gets a Heckler & Koch HK 94 (converted to look like an MP5A3), and announces it by delivering the dead body of one of the thieves with a Santa hat on and “Now I have a machine gun. Ho-Ho-Ho” written on his sweat shirt. The MP5 was one of the finest submachine guns when it was introduced just a few years ahead of “Die Hard.”

The submachine gun, wielded by the baddies as well, does a lot of heavy lifting in the movie. However, it fails when McClane needs it to try to escape via an elevator shaft. He extends the stock to anchor the gun as he attempts to lower himself down an elevator shaft. The strap breaks and McClane nearly falls before catching himself with an air vent.

McClane gets his bare feet cut after Hans, knowing he’s barefoot, orders one of his henchmen to blast a glass partition with his H&K. McClane has to run through it, cutting his feet. Our hero gets a new H&K each time he mows down henchmen, but runs out of ammo before his decisive confrontation with Hans. 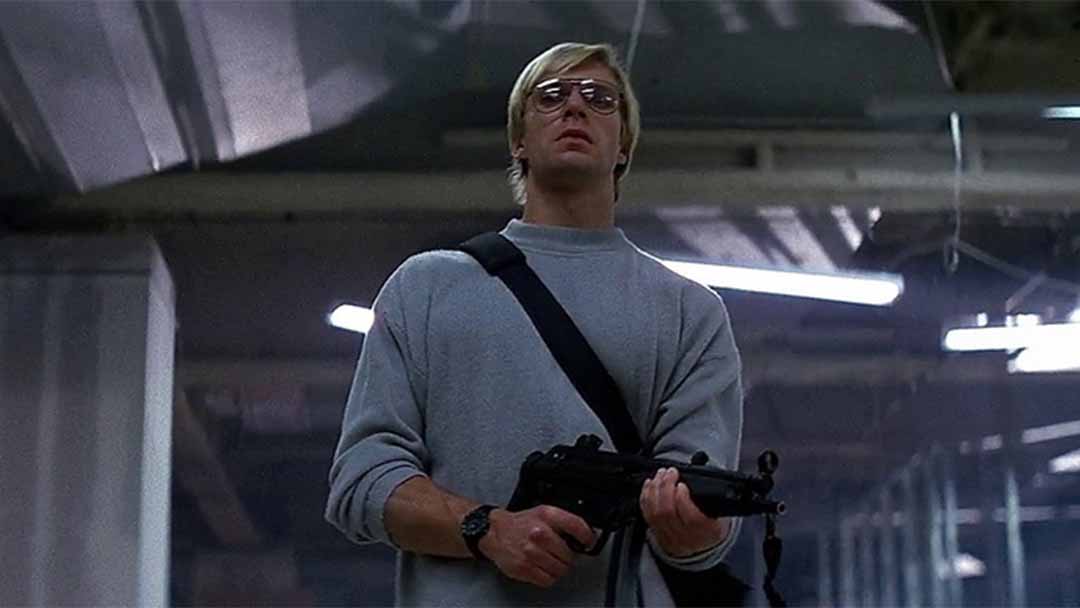 One of Hans Gruber’s henchmen carries a Heckler & Koch HK 94 converted to look like an MP5A3.

When you needed to go full auto with a European flair in the 1980s, the Steyr AUG was the only choice. Karl, who looks like the angriest European in the movie, wields the bullpup while hunting John McClane and seeking vengeance for his brother, the dead thief with the Santa hat.

Karl shoots at the air vents in one part of Nakatomi Plaza trying to hit McClane. He points the AUG at McClane at the start of the fight where viewers believe Karl is killed by McClane — SPOILER ALERT AHEAD! — until blood-covered Karl appears at the end of the film wanting to kill McClane with the AUG.

But we digress. We aren’t ready for Al Powell’s hero moment yet. 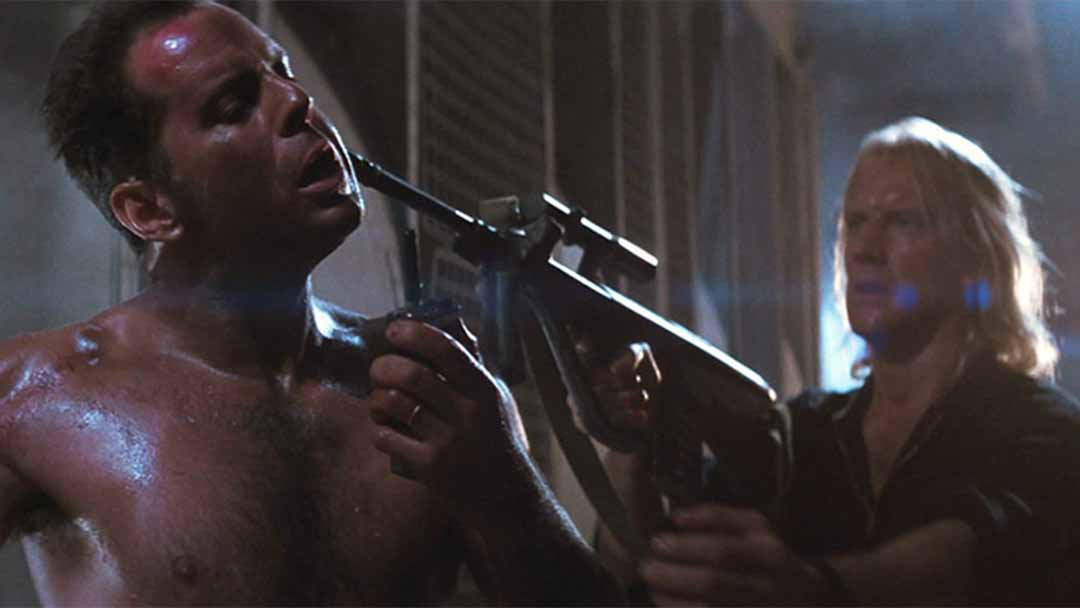 Karl threatens John McClane with a Steyr AUG shortly before they fight to the death… maybe?

“I Am Going to Count to Three. There Will Not Be a Four.”

Hans Gruber’s main carry is a chromed Heckler & Koch P7M13. He uses it when he demands the pass code from Mr. Takagi in order to get the bearer bonds. When he fails to get it, Hans shoots Takagi. Hans also shoots a co-worker of Holly, Ellis, who tries and fails to get McClane to give up detonators needed for the heist.

Of course, there is the ultimate showdown between Hans and McClane. Hans has Holly at gunpoint, and McClane’s Beretta is taped to his back. With two bullets left, McClane rips the gun from his back and kills a henchman and wounds Hans.

Hans falls toward a broken window and grabs Holly by the wrist. Just as Hans is about to pull his H&K up to shoot McClane, he get Holly’s wrist watch off and Hans falls, waving his gun as he plummets to his death, spawning perhaps one of the best Advent Calendars of all time. 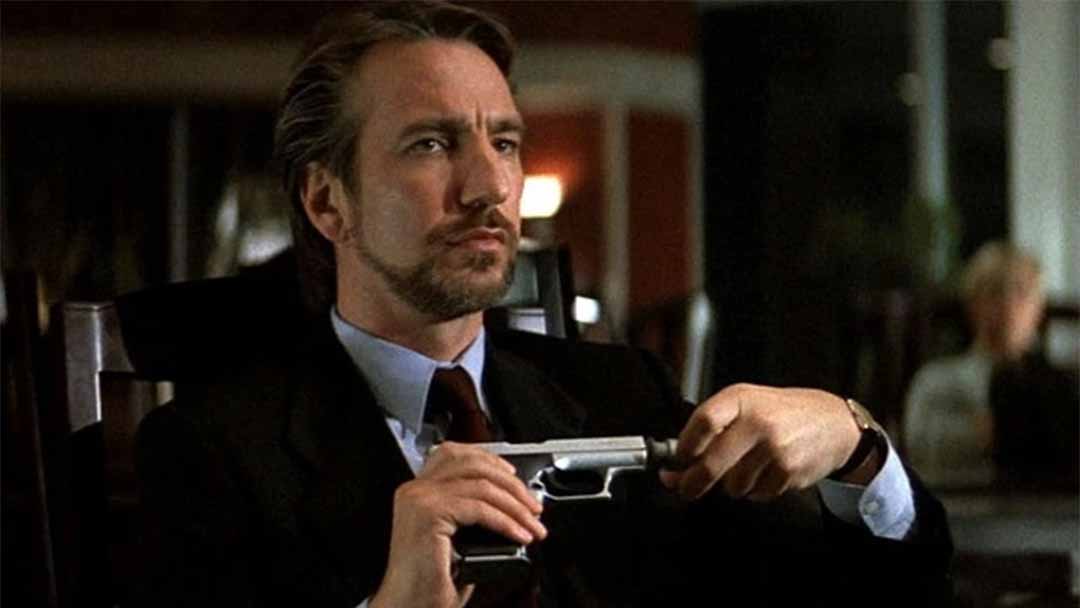 “You Asked for Miracles, I Give You… the FBI”

“Die Hard” has a wealth of weapons. The bad guys carry them, John McClane has them, the SWAT team and FBI guys are loaded for bear, but don’t stand a chance.

Hans Gruber’s crew had a fictional rocket launcher that took out a police armored vehicle, and Karl had a suppressed Walther PPK to take out the security guards on the first floor when he and Theo, the computer whiz, entered Nakatomi Plaza. One of the crooks has a different Walther, a P5, when McClane is first confronted, an encounter that didn’t end well for the bad guys.

The police came heavily armed, with SWAT team members carrying M-16 rifles and FBI Agent Johnson (no relation to the other FBI Special Agent Johnson) has a Steyr SSG 69 with a night-vision scope when they are aboard a helicopter that is sent to pick up the hostages. The helicopter is also equipped with an M60 machine gun. 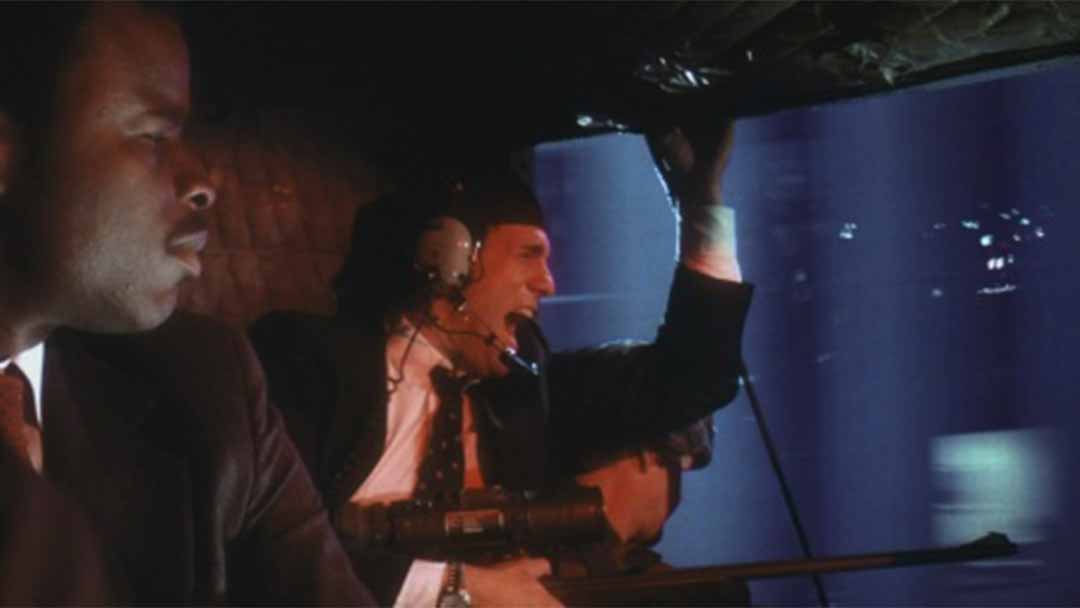 “Welcome to the Party, Pal”

Sgt. Al Powell is a beat cop for the Los Angeles Police Department and carries a Smith & Wesson Model 15. He’s been on desk duty since accidentally shooting a 13-year-old boy holding a toy gun. He was on his way home to his pregnant wife on Christmas Eve when he gets the call to investigate Nakatomi Plaza.

Al stays in contact with John McClane by police radio throughout the crisis. After the showdown with Hans, McClane and Holly make their way out of the buildings as bearer bonds (snow!) rain down. Just as McClane greets Al and introduces Holly, Karl with AUG in hand arises and takes aim at McClane. As everyone ducks, Al stands tall, draws his Smith & Wesson and pumps five slugs into Karl. It’s a classic wheel gun moment in a movie of modern weapons. 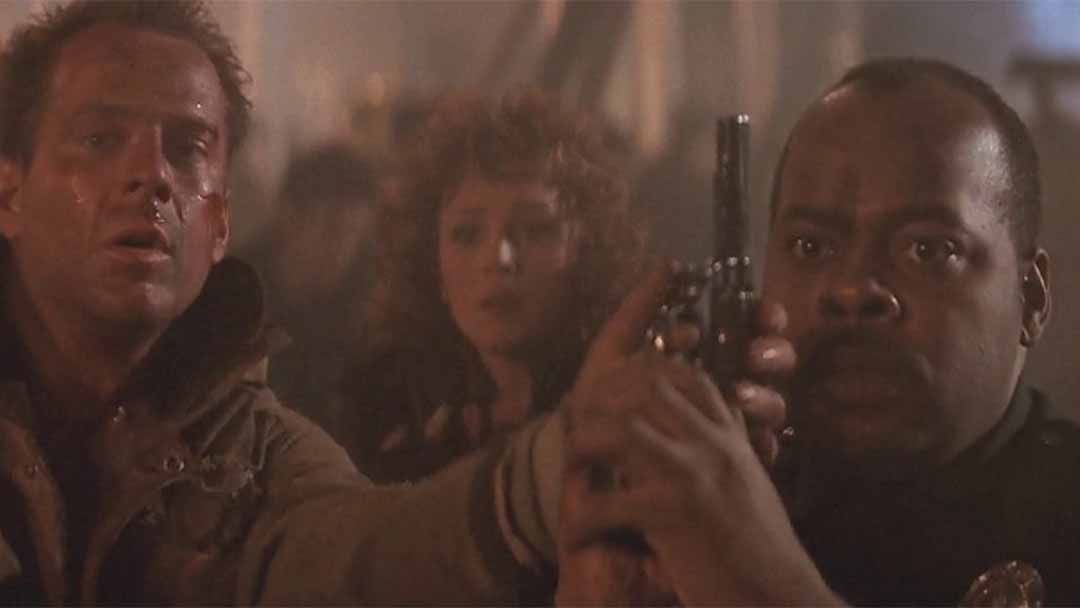 Is Die Hard a Christmas Movie?

Families are a cornerstone of Christmas movies, and John McClane flew all the way across the country to see his wife and family. At the end of the film McClane introduces Holly to Al as Holly Gennaro, but she corrects him, saying “Holly McClane.”

McClane overcame much adversity in stopping the heist. He got his feet cut with broken glass, he got shot at, and fought jet lag in order to celebrate Christmas with his family.

As far as Christmas miracles go, the FBI arrives and follows its playbook, shutting down Nakatomi Plaza’s power grid so that Hans and his band can open the vault with the Bearer bonds. It’s a Christmas miracle predicted by Hans.

There is definitely an office Christmas party. Ellis does cocaine. A couple has sex on a desk as the thieves arrive. There are cocktails. McClane even welcomes (pa)Al to the party after dropping a dead hoodlum on the hood of his squad car. “Come out to the coast, we’ll get together, have a few laughs,” McClane mutters as he is crawling through air ducts.

It may not be traditional snow, but in Los Angeles on Christmas Eve, millions of dollars of bearer bonds fluttering down onto the chaotic aftermath at Nakatomi Plaza surely qualifies. 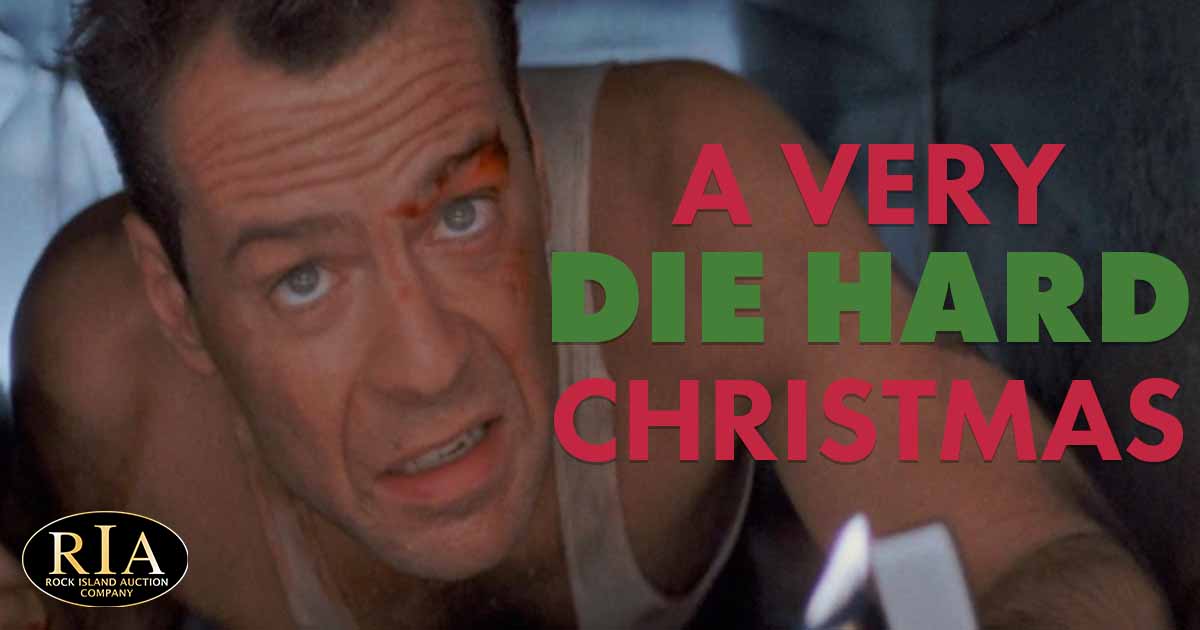