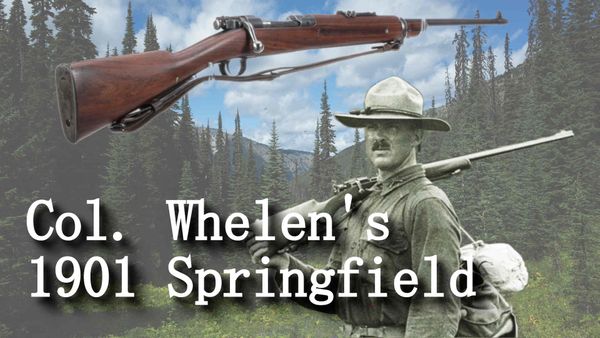 An avid outdoorsman, marksman, hunter, soldier, and author, Whelen wrote for numerous sporting magazines and penned several books on topics ranging from gunsmithing to rifle scopes to big game hunting, shooting, and weapon cleaning. A career U.S. Army officer, he served as the commander of the Frankford Arsenal in Philadelphia before retiring as a full colonel after 34 years of active duty. He was 84 when he died in 1961.

Townsend Whelen in his element.

These are his thoughts on whether or not to hire an outfitter for a hunting expedition that would provide cooks, guides, necessary equipment, and sleeping accommodations:

“The western dude, or the eastern sport, who starts under these present comparatively luxurious conditions does not long remain a tenderfoot,” Whelen wrote in `On Your Own in the Wilderness,’ published in 1958. “Either he quits the game when he has a few heads to hang on his wall, or he becomes a real hunter, fisherman, and woodsman in his own right.

“If you have red blood in your veins, a love for the beautiful, and a deep-down yearning for freedom and peace, you soon learn to do things for yourself,” he wrote. “You take a more and more justifiable pride in your increasing competence. Perhaps you start out hardly able to step over a picket rope and end by hurdling the mountains.”

An experimental U.S. Springfield Model 1901 bolt action carbine inscribed to Whelen when he was a lieutenant in the Army will be on auction at Rock Island Auction Company’s Feb. 16-18 Sporting and Collector Firearms Auction. It’s serial number 11. The rifle gauge is .30-03, not the .30-06 he recommended in `On Your Own in the Wilderness’ and throughout his life.

The experimental 1901 wasn’t adopted by the U.S. Army but served as a precursor to the M1903 that proved to be a mainstay for doughboys and GIs through two world wars. In limited production, more tests were done to the 1901, leading to several changes. The rear gunsight was moved back and the barrel was shortened from 30 to 24 inches as it evolved toward the M1903.

The .25 Whelen, .35 Whelen, .375 Whelen, and .400 Whelen cartridges bear his name from when he commanded the Frankford Arsenal.

He designed a lean-to tent he called, appropriately, the `hunter’s lean-to tent’ in 1925 and David Abercrombie, of Abercrombie & Fitch, manufactured and marketed it as a `Whelen lean-to.” Various versions can still be found for order on the Internet.

Born of blue blood in Philadelphia in 1877, as a child, Whelen was gawky and withdrawn, seemingly not cut out for the life of the military nor outdoor adventure. The gift of a Remington rolling block .22 at age 13 changed that. He taught himself to shoot and by 15 he was winning rifle matches.

At 18, he began exercising seriously and gained 30 lbs. of muscle, and joined the Pennsylvania National Guard as a private. Three years later, his unit was called up for the Spanish-American War but didn’t see action. He quickly rose to sergeant, then to lieutenant. As he was promoted, he saw his future as a career military officer and applied for a commission.

Officer testing wouldn’t be for a year, so Whelen resigned from his reserve unit, quit his job, and headed for the wilderness of British Columbia, taking little more than the essentials with him. Among the items was a tarp to create his lean-to tent. He spent several months roaming the wilds and hunting game before returning to Philadelphia and the officer exam.

Among Whelen’s assignments as a regular Army officer was the garrison force to protect the Panama Canal as it neared completion. The area his unit was assigned was thick jungle that Whelen traipsed into on weekends. He explored carrying little more than his rifle and what could fit in a rucksack. With his experiences, he trained his men on jungle survival and set the standard for the U.S. Army.

Whelen, known as Mister Rifleman, was a superior marksman and served on several Army teams competing against the other branches.  He wrote `Suggestions to Military Riflemen” in 1909 and is listed as the winner of the Army Competitions in 1903, Coach of the U.S. Army Infantry Team in 1905, and as a member of the U.S. Infantry National Team in 1903, 1906, and 1907.

As the United States entered World War I, Whelen found himself assigned to the Army General Staff, inspecting camps and creating training regimens.

He found an interest in ordnance after the war, commanding the Frankford Arsenal and serving as director of research and development at the Springfield Armory, working with highly-trained gunsmiths and learning from them.

Townsend Whelen later in life holds a rifle with a scope.

In his books, Whelen writes about the proper ammunition and rifle for hunting, to achieve humane kills and preserve pelts. He long promoted the Springfield .30-06 and the .22 long rifle. In the `American Rifleman,’ he wrote: “The .30-06 is never a mistake.”

Whelen explored Canada, the Rocky Mountains, and the Adirondacks, and bagged 110 head of big game during his career. He was a regular contributor for Field & Stream, Sports Afield, Outdoor Life, The American Rifleman, and Guns & Ammo, according to an article about him in Field & Stream.

Book covers to three of Townsend Whelen’s books. He penned dozens of books and thousands of articles.

In his voluminous writing, Whelen offered mountains of advice. Here are just a few nuggets:

First and foremost, clean your firearm. “A firearm is a piece of fine machinery. Like any other machine, if it be treated with the proper care at the proper time it will last a lifetime and always give satisfaction. Fail to give it this care, and it will soon deteriorate.

“In some respects, the care of a firearm is more complicated and difficult than the care of other machinery. It is often exposed outdoors to very severe weather. The firing of the cartridge introduces into the bore a fouling which will most certainly cause rust and deterioration unless it is quickly and completely removed.”

Use the sling. “The advantages of using the gun-sling are: absolute steadiness in the prone position; distribution of the recoil to the entire body; quickening return of the rifle to the target in magazine fire; preventing the rifle recoiling off the target; and minimizing the effect of the wind, fatigue, and breathlessness on holding.”

Fitness is important in shooting. “A strong, muscular man will always have an advantage over a weak man in military shooting. The weak man may be able to shoot a score or two as well as his stronger brother, but the latter can hold so hard that the recoil is scarcely felt, while the former will be so kicked around that as the shooting progresses his work will fall off. In competitions like those in the regular Army, where the competitor has to compete at his post for top score and then go through two severe competitions of six days’ duration each, strength becomes an enormous factor. So, too, in a strong wind the powerful man can hold his rifle more firmly against the wind than the weaker one.”

Your eyes are important. “It well behooves even those with good strong eyes to take extra care of them during the target season. The eyes should never be used any more than is absolutely necessary, and then never for long-continued intervals.”

Aim for the ‘boiler room’ to make humane kills. “The chest, containing the heart and lungs, presents the largest mark. A modern bullet at modern velocity penetrating into this boiler room disrupts so much tissue, and so fills the cavity with blood that the animal either succumbs on the spot or drops after a wild race of perhaps twenty-five to a hundred yards, as soon as the supply of blood to the brain ceases.

“This critical area is not a difficult target. Any hunter who cannot be fairly sure of striking it with the majority of his shots has no moral right to hunt with the rifle, for he will cause too much suffering.”

The wilderness called to Townsend Whelen and he answered it countless times. He hunted big game and lived off the land. As a soldier, he put his wilderness knowledge to use. As a writer he shared that knowledge.

In the Feb. 16-18 Sporting and Collector Firearms Auction, a seldom seen U.S. Springfield Model 1901 bolt action carbine, inscribed to then-lieutenant Whelen will be on offer. More than just a rare long gun, this Model 1901 is a piece of outdoor writing history and honors a man who lived life to the fullest.

`On Your Own in the Wilderness,’ by Townsend Whelen and Bradford Angier