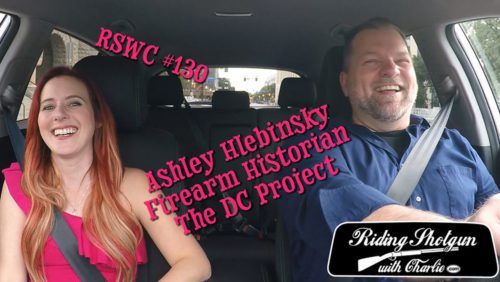 U.S.A. -(AmmoLand.com)- Ashley Hlebinsky is THE coolest firearm historian you’ll ever meet! We were both speakers at AMMcon (hosted by the Second Amendment Foundation) in Dallas recently.  Since she is a  historian and we were in Dallas there is only one place for us to visit: Dealey Plaza.  Of course, you know this is where Kennedy was shot by Lee Harvey Oswald. I LOVE the Kennedy assassination conspiracies! All of them. And while watching any documentary on it, I will buy whatever theory they’re selling.

But not Ashley.  She likes the real story!

Ashley wanted to be a doctor like many folks, but she was interested in battlefield medicine which led to firearms and firearm history. Ted Koppel said about her, she wanted to learn to save lives than to things that could take lives. But she’s really into much more about how firearms work, how the evolution of firearms has changed, and its impact on the industry, technology, society, and culture.

One of her personal interests is in guns used in crimes. Many museums don’t want to bring up the firearms used in crimes, but Ashely really enjoys that part of the story about firearms. She says that not knowing about firearms leads museums to put some wrong firearms on display.  This is where she really enjoys working, coming up with how a firearm used in a crime can be a valid and educational display at a museum.

During her undergrad years after she changed majors, she was doing as much as she could including volunteering,  internships, researching, and learning to shoot.  While a senior in college, Ashley was able to parlay internships into getting hired by the Smithsonian.  She was able to go from the Smithsonian to the Cody Firearms Museum in Wyoming, where she ran just about everything behind the scenes and all the displays for the exhibitions, collections, and education.

Once we get to Dealey Plaza, the conversation turns to the Kennedy assassination and what was going on during the 1960s, and many of the various conspiracies. We do get some selfies at the School Book Depository, the grassy knoll, and the two X’s where the bullets hit Kennedy.

Ashley brings up what she calls the Post World War II era and how the turbulent times and several assassinations lead to the Gun Control Act of 1968. We talk about the possibility of Frank Sinatra and Marilyn Monroe ties to the Kennedys, the similarities between Lincoln & Kennedy, and other irrelevant and interesting topics. Including James Earl Jones, where the Carcano rifle is, and the FBI trying to get Martin Luther King, Jr to commit suicide.

Besides everything that Ashley is involved with she’s also with The DC Project. She testified in front of Congress. She’s a producer of TV shows on the paranormal on the TRVL Channel and several shows for Brother in Arms and Midway USA’s Gun Stories.

Ashley was a great sport going to Dealey Plaza and taking the conversation in several places. I’m glad that I was able to have her as part of the Stagecoach Across America.

Favorite quotes:
“Personally, I’m more fascinated by guns used in crime and how to interrupt them than guns not used in crime.”
“A lot of people want to work in the gun vault. And he said I was the only person that he actually thought could do it.”
“When I go to a museum, I don’t like to read. I’m there to see the stuff.”
“Because there’s so much armed radicalism, the government starts doing some crazy stuff.”
“I wouldn’t be surprised if it was an inside job. Because they’re doing kinds of stuff for the benefit of I’m not sure who. ”
Ashley Hlebinsky Instagram
https://www.instagram.com/historyinheels/

Riding Shotgun With Charlie isn’t about firearms. It is about having an intimate conversation with 2 people talking. You’re the fly on the rearview mirror. Many passengers are involved in the firearm community, but not all of them.

This is a more intimate conversation than a phone, radio, or Skype interview. You get to see the passengers. And you’ll see where the road and the conversation take you! www.ridingshotgunwithcharlie.com, Facebook