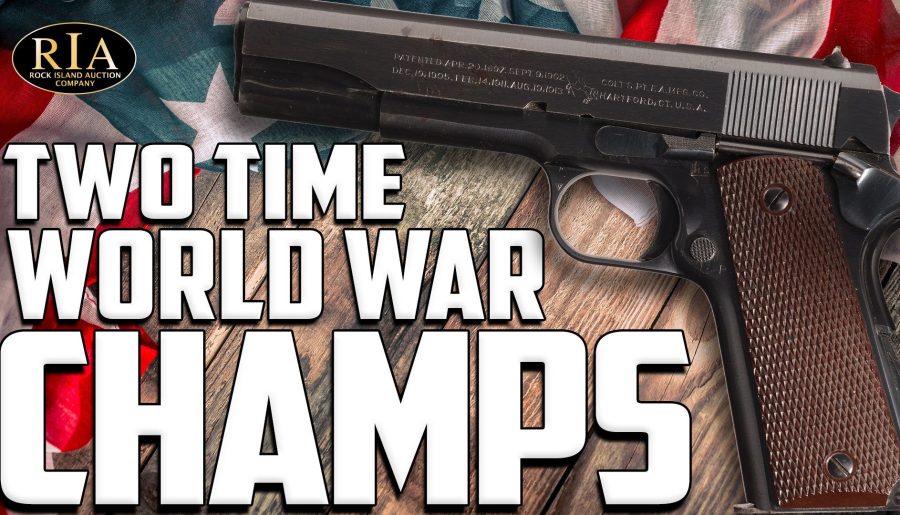 When you think of the most American guns, the M1911 probably ranks high on the list. And why shouldn’t it? “Old Slabsides” is the longest-serving pistol in U.S. military history, a sidearm that helped win two World Wars and cement the United States as back to back world war champs. The M1911 is a true piece of Americana, but does its lofty reputation live up to the hype? 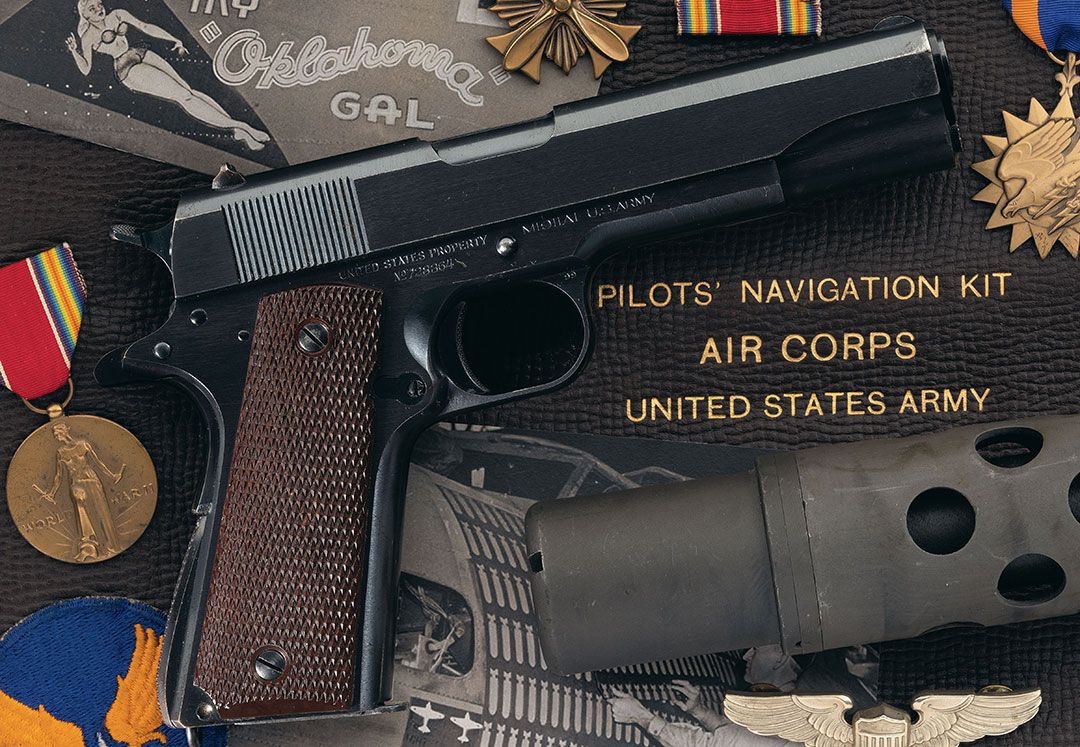 The 1911 pistol’s century-old association with the United States Military is a large part of its appeal. The iconic sidearm represents America at its finest, Uncle Sam leading the free world in the fight against tyranny. When it comes to design, reliability, historic pedigree, and the ability to deliver the impressive stopping power of a .45 ACP slug, it’s easy to understand why the M1911 pistol is so revered.

We’ve all seen movies where a soldier expends his rifle ammo and unholsters his trusty 1911 in a daring last stand. Real-life accounts of John Browning’s pistol being used on the battlefield were just as extraordinary as the heroes who carried them, elevating the M1911 to the stuff of legends and earning the gun nicknames like the “Yankee Fist.”

If you want to win back to back World Wars, you need a dependable arsenal of small arms that can be produced en masse. Fortunately, America had John Moses Browning on the case. Often dubbed the da Vinci of gun inventors, Browning designed some of the most recognizable military weapons of the early twentieth century, including the Winchester Model 1897 Trench Gun, the BAR, and the M2 machine gun. When it came to updating America’s standard-issue sidearm and meeting the military’s request for a .45 caliber pistol, John Browning was just the man for the job. 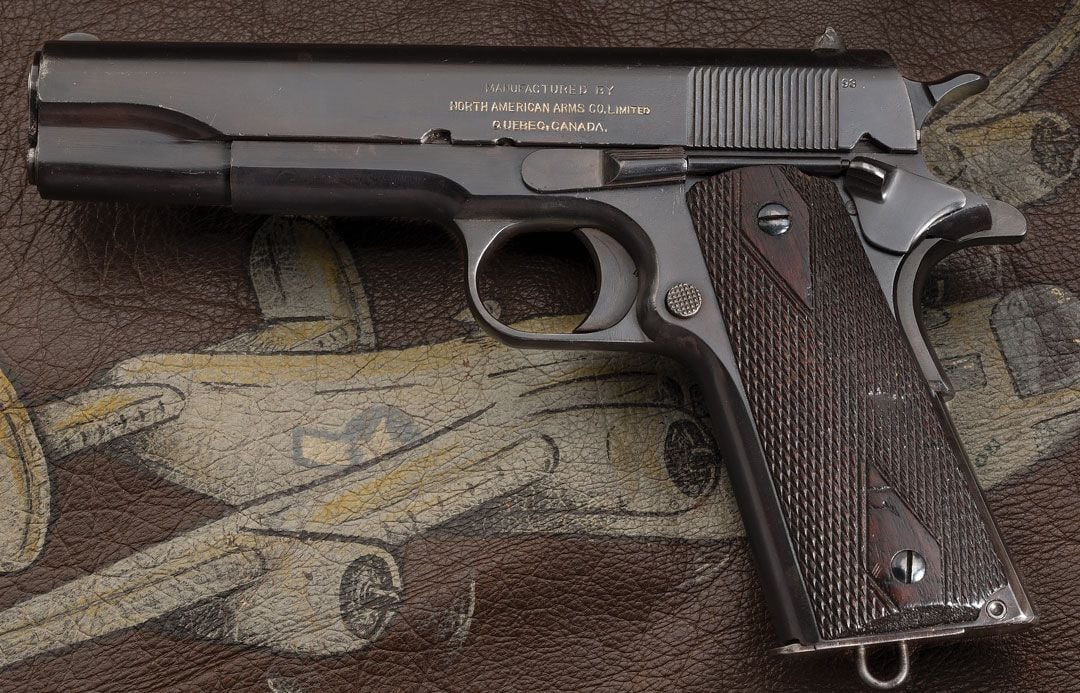 By the early 1900s, some militaries had already transitioned from revolver to pistol. During the Philippine-American War, the U.S. military conducted extensive testing to find a durable and powerful handgun of their own. Six manufacturers submitted entries into the 1906 trials, with only Colt, Savage, and DWM remaining after the early rounds. 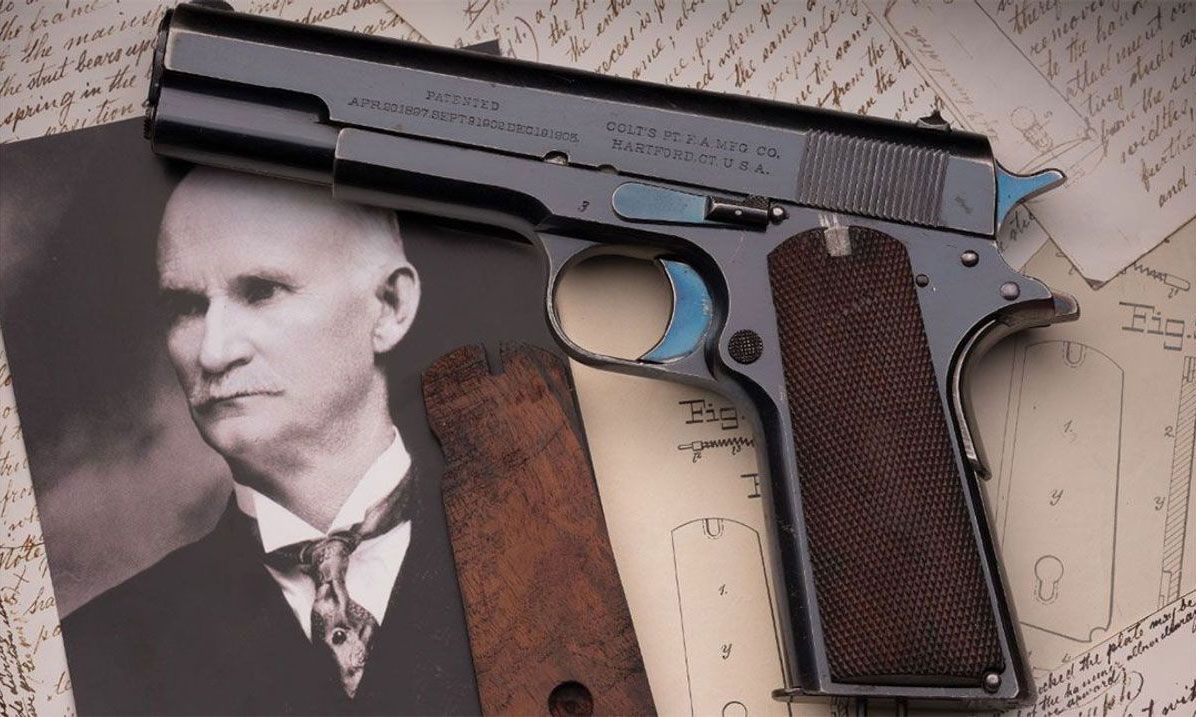 The road to the 1911 pistol included years of revisions, experimentation, and torture tests, and in the end, Colt’s handgun simply outperformed the competition. America had found its pistol, and with the shadow of war looming in Europe, the timing couldn’t have been more fortunate for the Land of Stars and Stripes.

The M1911 was put to the test on the war-ravaged battlefields of WW1. Production was slow at first, and in 1914 the United States possessed a mere 75,000 pistols for just under 80,000 enlisted servicemen. Colt and Remington-UMC went into full-scale production and were able to manufacture 643,000 M1911 pistols by the end of the Great War, with Springfield managing 25,767. 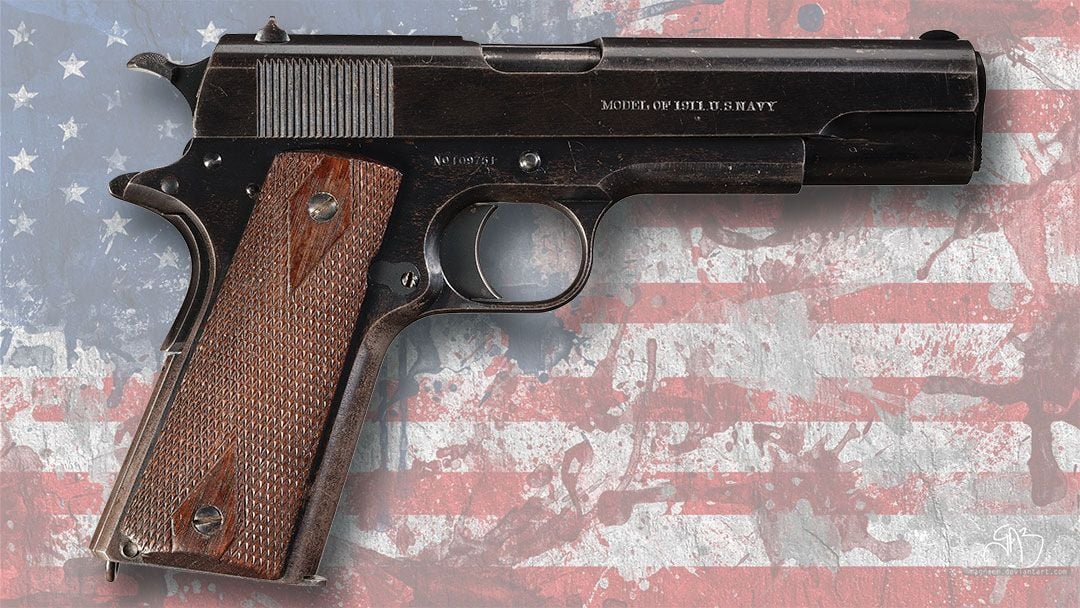 The M1911 saw action in Mexico and Haiti in the years leading up to America’s entrance into the First World War, but the European battlefields were the pistol’s true trial by fire. Though the constant dirt and muck of trench warfare was a challenge for any weapon, Browning’s handgun design proved more resistant compared to competitors like the German Luger and C96 Mauser. America’s pistol had arrived on the world stage and would soon be immortalized by some of the war’s greatest heroes. 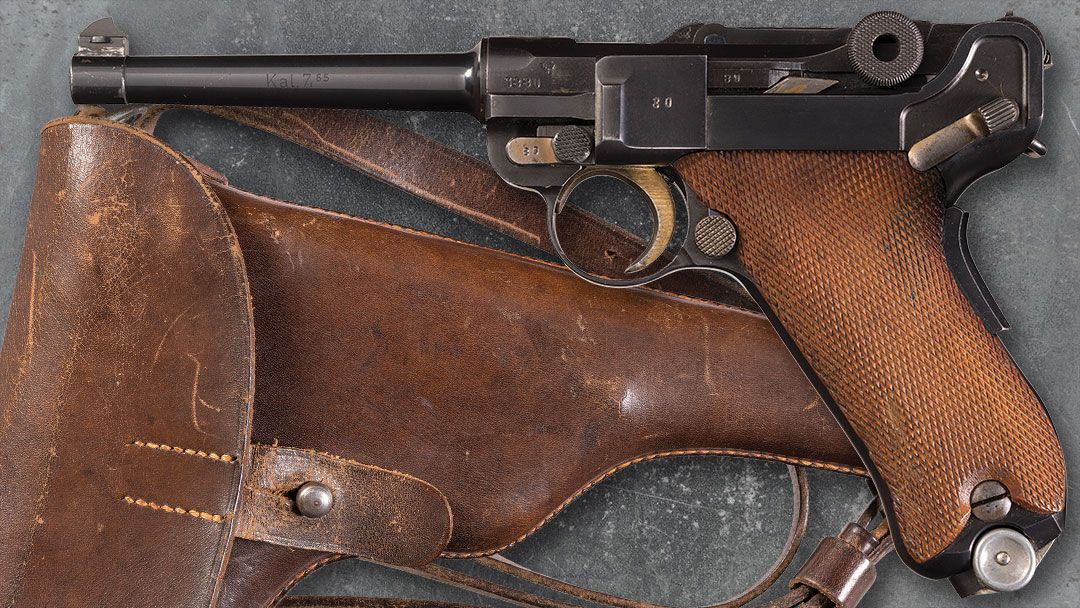 Pilot Lt. Frank Luke, Jr. was considered America’s Ace of Aces late in the war, with 18 confirmed kills before his death. His last stand on September 29th, 1918 is the true stuff of legend. Luke’s Medal of Honor citation states, “Forced to make a landing and surrounded on all sides by the enemy, who called upon him to surrender, he drew his automatic pistol and defended himself gallantly until he fell dead from a wound in the chest.”

According to fellow pilot Lt. Charles D’Olive, who interviewed several French witnesses shortly after Luke’s final fight, “When these German soldiers ran down there, they went around the tail of the ship and he killed seven of them with his two .45s. He was an excellent .45 handgun shooter.”

During the Meuse-Argonne Offensive of October 1918, just days after Lt. Frank Luke’s blaze of glory, U.S. Army Sergeant Alvin C. York put his M1917 rifle and M1911 pistol to the ultimate test after his platoon was ambushed. York and his seven remaining soldiers charged into a hail of German fire in an effort to disable their machine guns.

As York described in his diary, “As soon as the machine guns opened fire on me, I began to exchange shots with them. In order to sight me or to swing their machine guns on me, the Germans had to show their heads above the trench, and every time I saw a head I just touched it off. All the time I kept yelling at them to come down. I didn’t want to kill any more than I had to. But it was they or I. And I was giving them the best I had.”

Sergeant York picked off 20 Germans with his rifle before drawing his M1911 and facing off with six more adversaries charging him with fixed bayonets. York dispatched each of them with a single bullet, then saved his final pistol round to take the enemy commander prisoner and in turn force the surrender of the entire German garrison. Sergeant Alvin York earned the Congressional Medal of Honor for his extraordinary efforts and was dubbed by General Pershing as, “the greatest civilian soldier” of WW1. 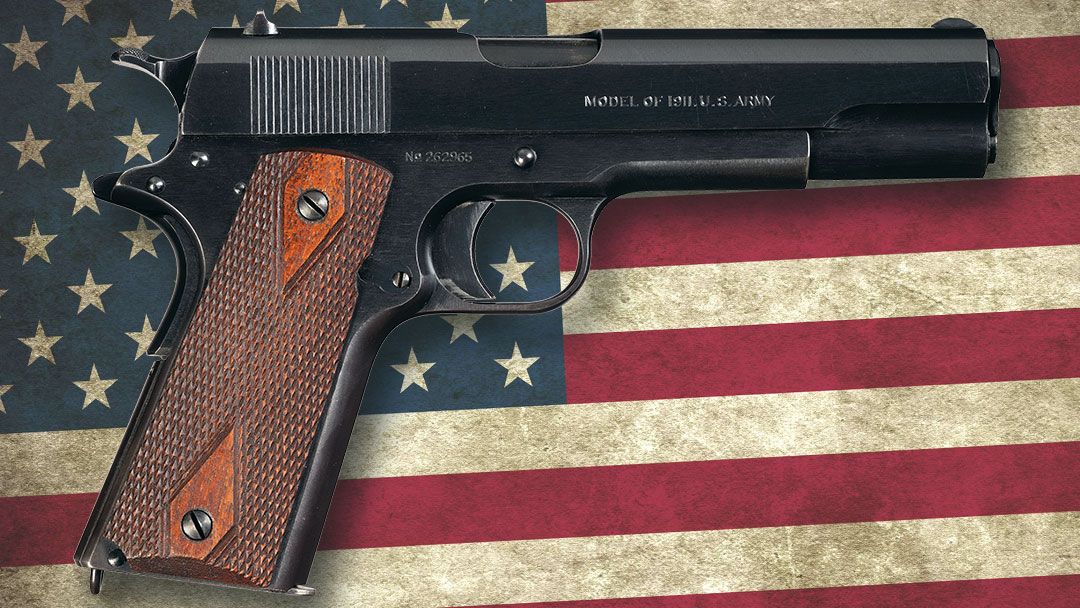 After serving with distinction in the First World War, the 1911 pistol underwent a series of small refinements intended to make the legendary handgun even easier to shoot. These included a shortened trigger, extended hammer spurs, simplified checkered grips, an arched mainspring housing, a thicker front sight, and angled clearance cutouts. No major changes were made to the 1911’s internals, testifying to the pistol’s exemplary performance record. 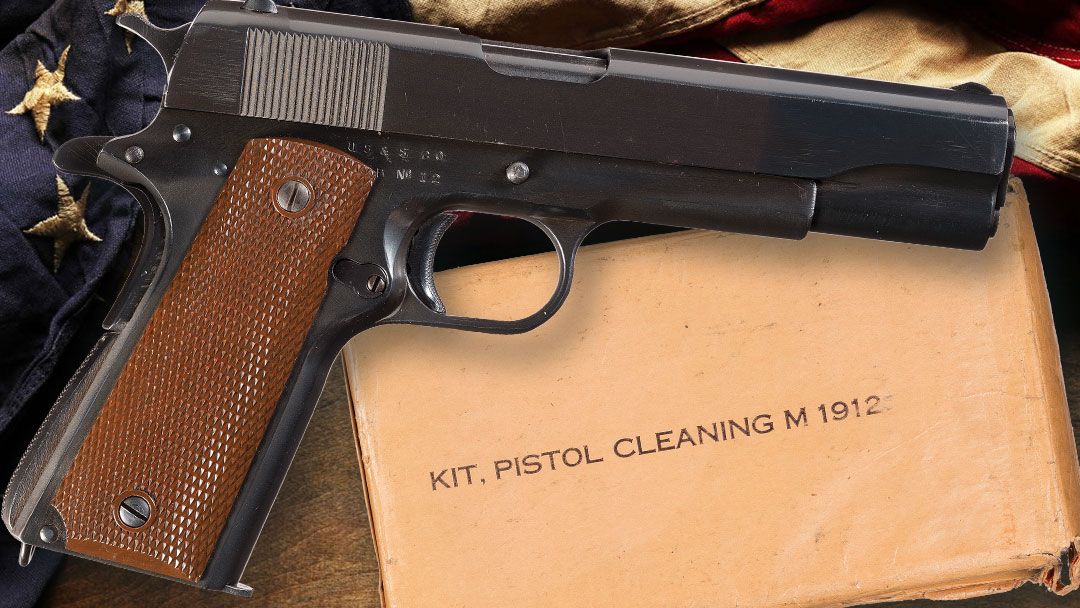 Designated the M1911A1, the military’s upgraded pistol went into mass production in the lead-up to the Second World War. President Roosevelt called on America to transform itself into “the great arsenal of democracy,” supplying arms to Great Britain, Canada, China, and other nations and guerrilla forces who opposed the Axis powers. Manufacturing the M1911A1 pistol in such vast quantities was a tremendous effort, combining the resources of established gunmakers like Colt, Ithaca, and Remington Rand with civilian companies like Union Switch & Signal and the famous sewing machine maker, Singer. 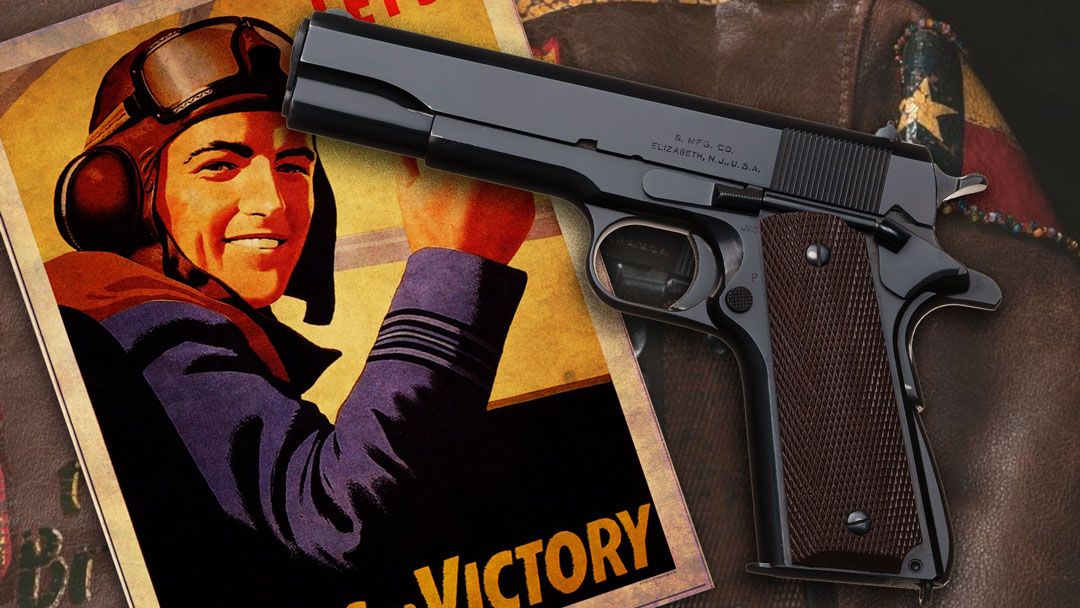 Around 2.7 million M1911A1 pistols were produced, making it far and away the most ubiquitous American handgun of the Second World War. The veteran pistol faced off against Axis handguns like the Walther PP and the Japanese Nambu, once again dwarfing their competition with its .45 ACP round. The America pistol’s sturdiness was also displayed in the numerous stories of 1911s shielding their wearer from shrapnel and bullet fragments, and soldiers who swear their lives were saved by the strength of “Old Slabsides.” 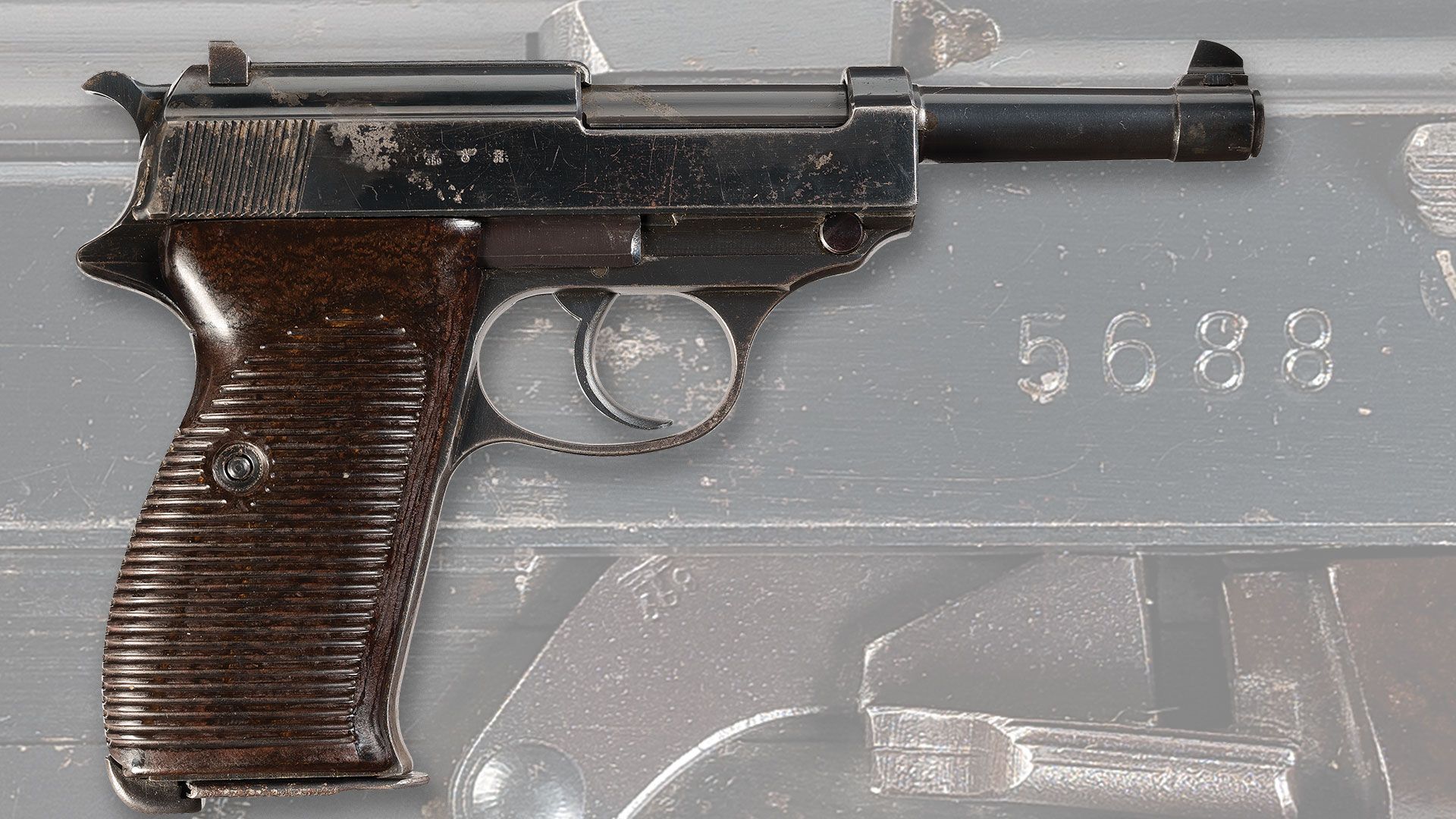 Strapped with his trusty M1911A1, Sgt. Basilone braved constant enemy fire to repair and man the machine gun positions, rally his men, and keep his gunners supplied. At one point, with ammunition running low, Basilone fought his way back and forth through the Japanese lines to deliver more shells, cutting down multiple attackers with his .45 pistol.

Private Nash W. Phillips, who lost a hand during the Battle for Henderson Field, recalled Sgt.Basilone’s heroism that day. “He was in a good emplacement, and causing the Japanese lots of trouble, not only firing his machine gun, but also using his pistol.” 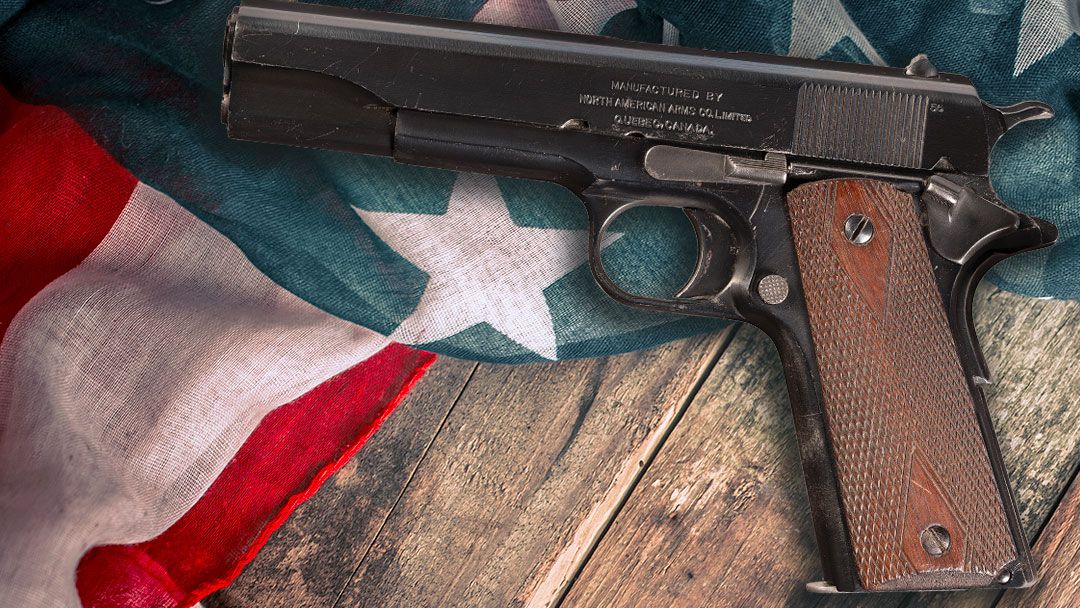 WW2 is filled with similar accounts of the legendary 1911 in action, including 2nd Lt. Owen J. Baggett taking out a strafing Japanese pilot with four pistol shots, and Division Sergeant Major Sheffield Banta glancing up from his desk long enough to upholster his Colt and dispatch a sword-wielding Japanese soldier who’d breached his command post during the Battle of Guadalcanal.

The 1911 persisted as the U.S. military’s standard-issue sidearm for another forty years, serving America’s finest through the Korean War and Vietnam. On January 30, 1951, during Operation Thunderbolt in Korea, 1st Lt. Robert M. McGovern of the 5th Cavalry Regiment, charged a Chinese machine gun emplacement that had pinned down his platoon.

Lt. McGovern’s Medal of Honor citation states, “When he was within 10 yards of the position a burst of fire ripped the carbine from his hands, but, undaunted, he continued his lone-man assault and, firing his pistol and throwing grenades, killed 7 hostile soldiers before falling mortally wounded in front of the gun he had silenced.” 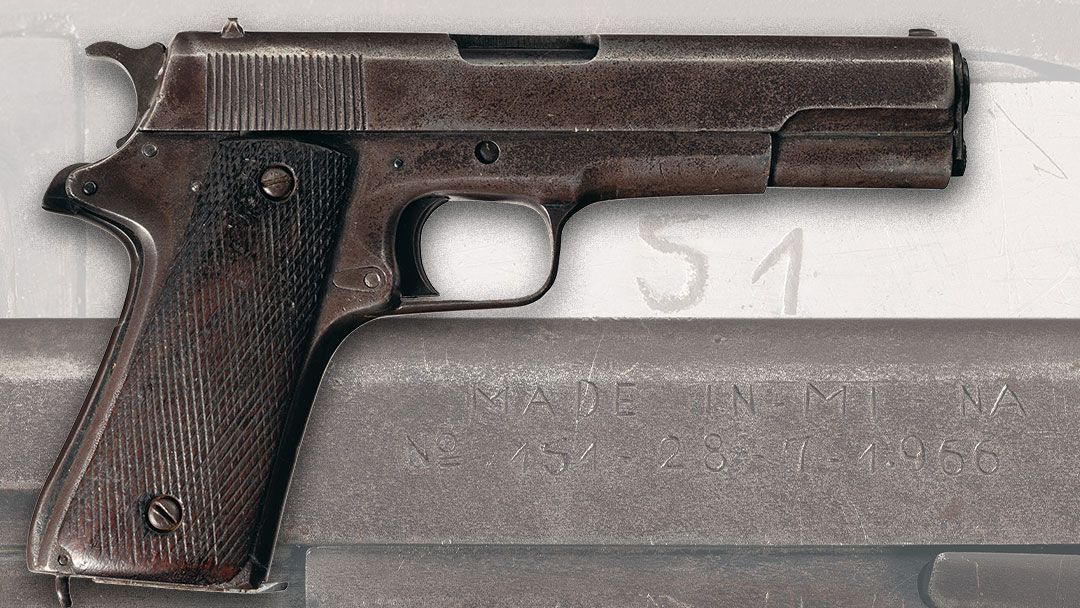 By the mid-1980s, the U.S. Congress was pressuring the Defense Department to adopt the Beretta M9 as America’s standard-issue sidearm. The policy of standardizing weapons and ammunition was encouraged across the NATO alliance, and the M9 used the NATO 9mm round. Select units like the Delta Force and the USMC’s Force Recon continued to use the M1911A1 years after the Beretta was introduced, and the legendary pistol found its way to both Gulf Wars, Afghanistan, and beyond. 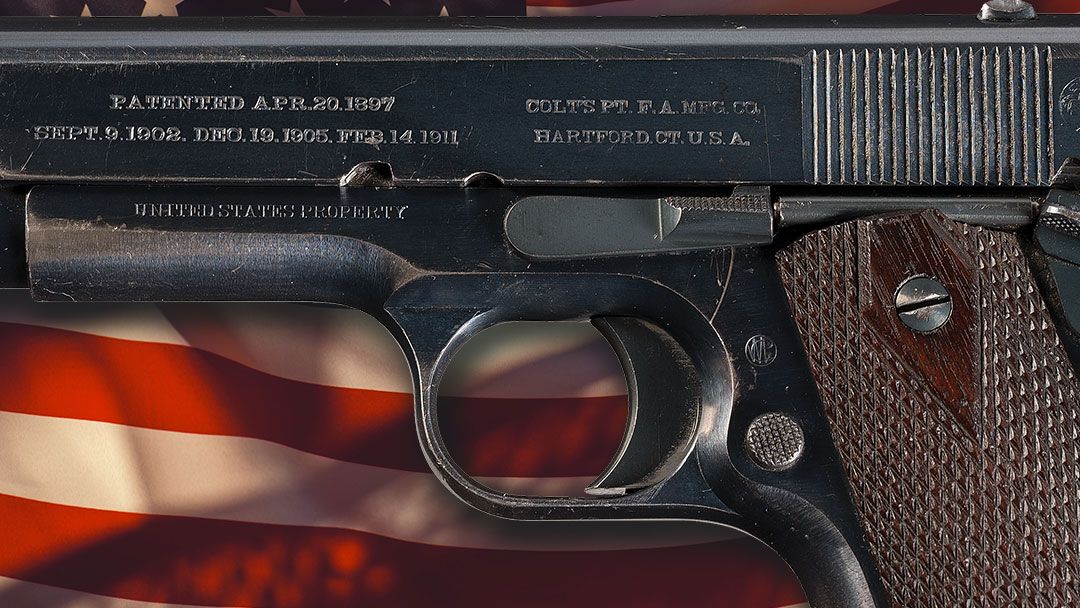 “Pistols do not win wars, but they save the lives of the men who do.  The noble 1911 is a mechanical marvel, whose ruggedness, dependability and ferocious power have comforted four issues of GIs, and which, unlike any other instrument you can name, is as much superior to its rivals as it was in 1917.”                    –    Col. Jeff Cooper

The Beretta M9 was recently replaced by the Sig Sauer M17 as the American military’s handgun of choice, yet the venerable M1911A1 is still holstered by numerous officers to this day. Members of the Marine Expeditionary Unit Special Operations Capable (MEUSOC) team carried a 1911 variant through late 2016 known as the M45A1 Close Quarters Battle Pistol. Even in figurative retirement, the back to back World War champ still sets the standard for what a reliable military handgun should offer. 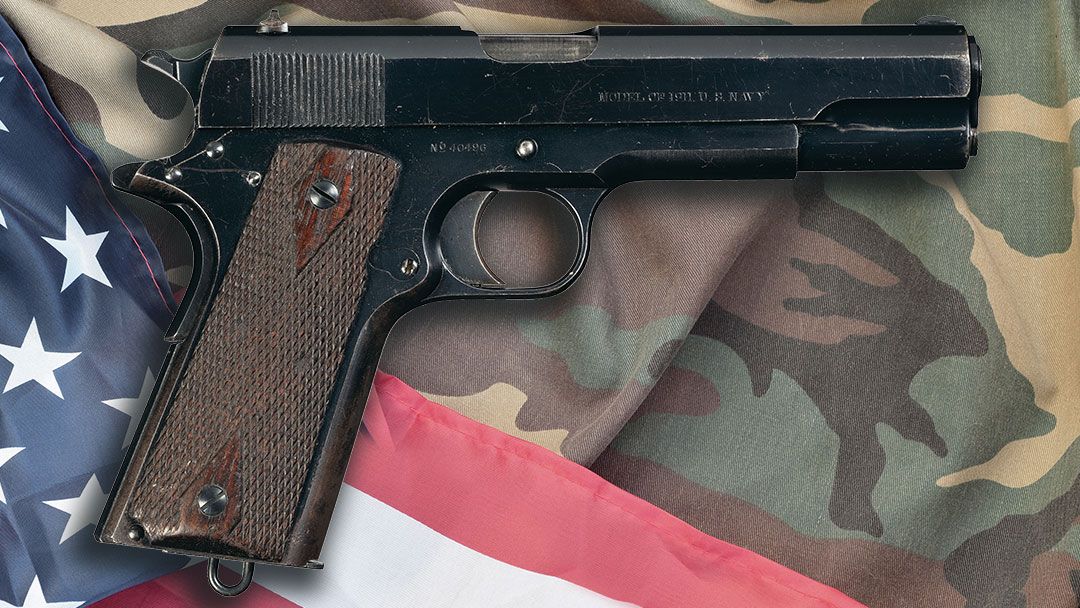 Given its distinguished military record, is it any wonder why the 1911 is so popular today? The platform is simple to operate, disassemble, and repair. It’s accurate and functional, and just a great gun to shoot. Thanks to over a century of film appearances, the 1911 silhouette has become synonymous with the American pistol, and its accomplishments and influence on gun design make the iconic sidearm a top contender for the definitive firearm of the 20th Century. 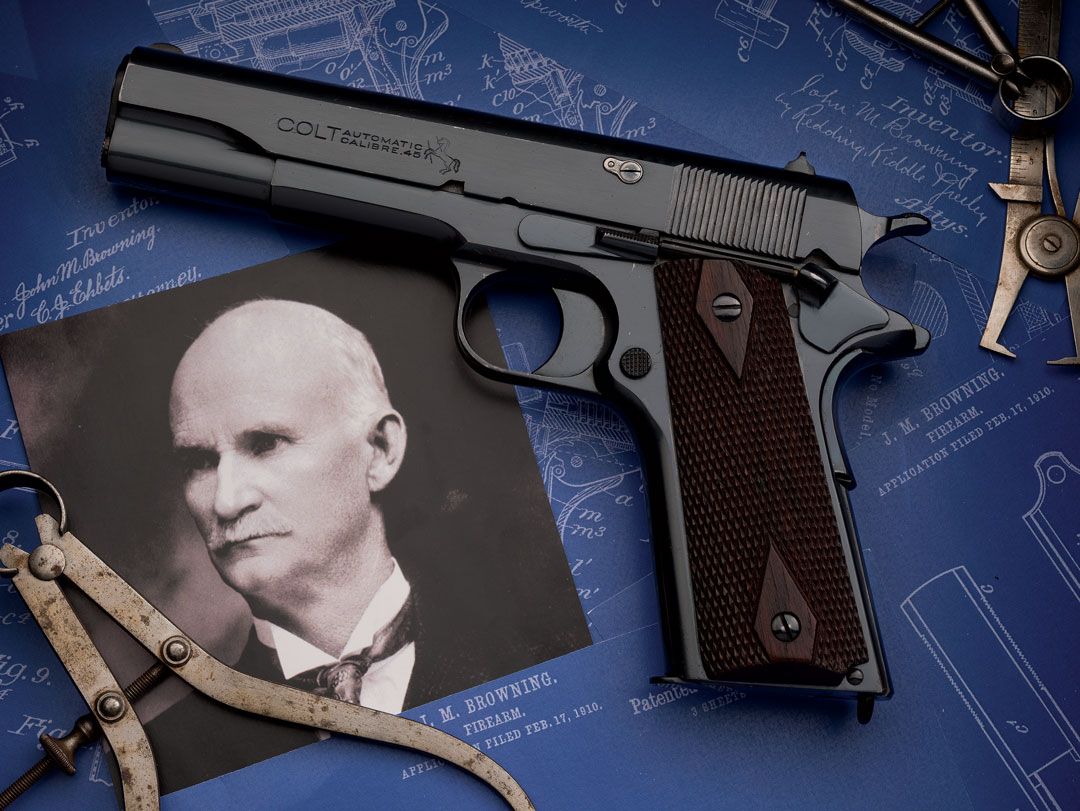 Original unaltered Colt Factory Prototype M1911 pistol with a “Cartridge Indicating Device” installed on the left side of the slide. A true one-of-a-kind collector’s gun. Available this August.

The back to back World War champ has earned a high reputation with gun collectors, and recent M1911 pistol prices and trends reflect the growing value of these classic military arms. Whether you’re looking to sell your gun or own one of the greatest pistols of all time, the current market presents a great opportunity for both buying and selling a 1911 pistol at Rock Island Auction Company. 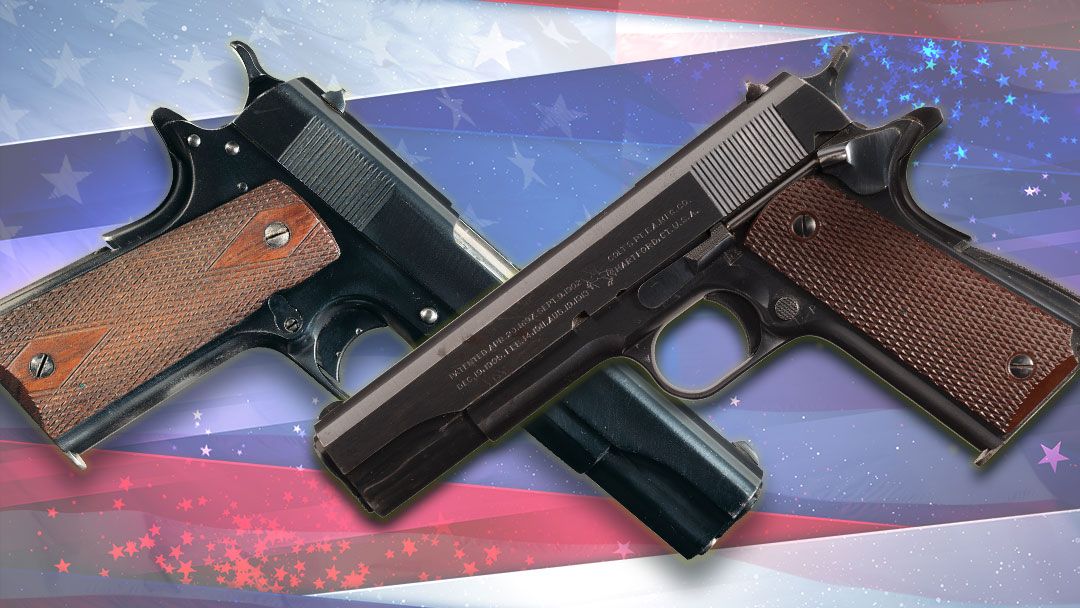 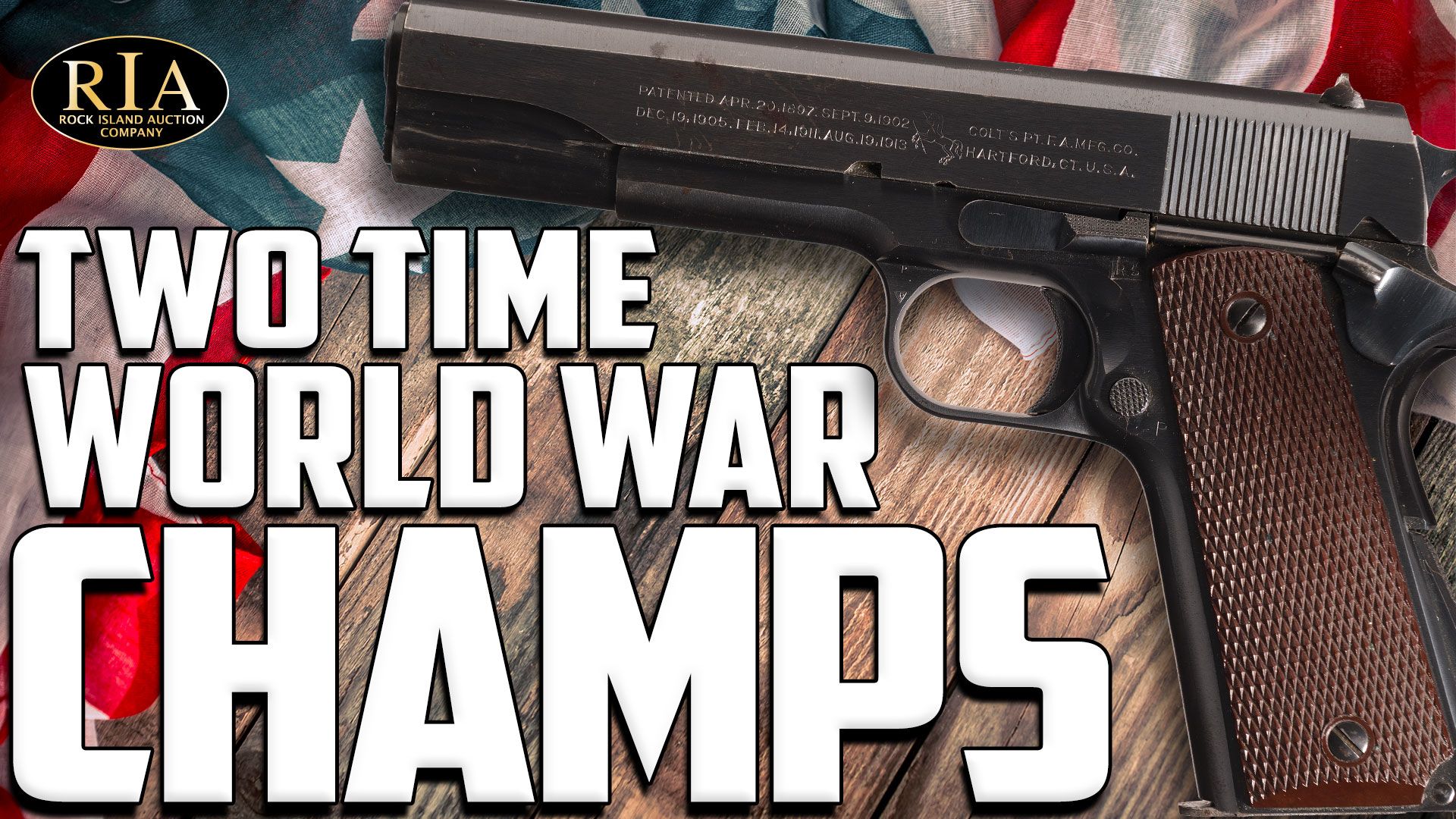