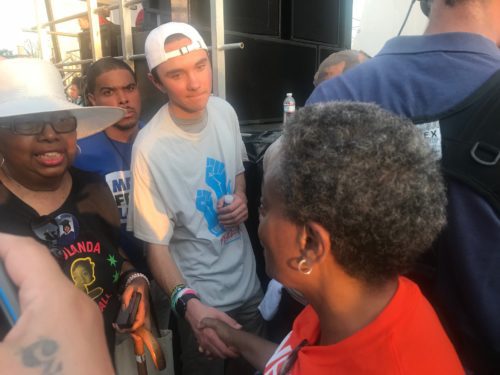 U.S.A. – -(Ammoland.com)- “Feds Seize Illegal Machine Gun From Ald. Jim Gardiner’s Ward Superintendent — And He’s Still On The Job,” Block Club Chicago reported Tuesday. “Charles Sikanich is also being sued by a man who says Sikanich and Gardiner falsely accused him of a crime, harassed him and had him arrested over a lost cellphone.”

“Under Illinois law, machine guns are illegal, and people caught with them could face three to seven years in prison,” the story adds. “Sentencing guidelines vary, with recommendations between six and 30 years if the weapon is found to be loaded or in a vehicle.”

Despite the seizure happening in August, Sikanich, who makes over $100,000 per year, is still out there driving his city truck?  Was it a crime for which an ordinary citizen would be arrested and prosecuted committee or not?

Then again, Sikanich and Gardiner are far from “ordinary citizens,” and nothing exemplifies that like their past conduct and the way they wield their power.

Most recently, Gardiner has been removed from Democrat party posts over “‘abhorrent and despicable’ behavior including ‘misogynistic, homophobic, and obscene language’ toward several people.” In “woke” circles, those are kisses of death.

To the rest of the world, those aren’t as bad as other claims against him, like two “ethics violations under investigation for using his office to retaliate against his political foes” and accounts that “that Gardiner is under federal investigation for allegedly taking bribes and demanding payments before taking official actions.”

Then there are reports that he “boots” citizens who ask about the allegations out of public meetings. And the thing is, it doesn’t appear to be a matter of “power corrupts.” A chronology of his career from before he got into politics raises all kinds of troubling allegations, including asking how he could start at the Fire Academy in 2005 “a month before resigning from his full time teaching position,” and a 2016 – 2018 post noting “This period of substitute teaching begins just before he reportedly began stalking his former girlfriend and ends shortly after the restraining order against him expired.”

And then we have ward boss Sikanich, the man with the seized Steyr. Looking at his police record suggests why he’d be a perfect addition to Team Gardiner:

“Battery – Make Physical Contact … Unlawful Representation as a Police Officer … retail theft at Addison Mall … retail theft at the K-mart … driving under the influence of a drug, operating a motor vehicle without insurance, and crashing into a parked car …”

That said, it’s not like Chicago Democrat ward politics are known for anything besides being bastions of privilege and hypocrisy, and that’s especially true when guns are involved.

Consider how the law there was back in 2008, and how a prior alderman, Richard Mell, got around and changed them to his exclusive benefit.

[B]asically, if you haven’t grandfathered your handgun in since 1982, and re-registered it and your other firearms every year, the law forbids you from having them. And Mell helped pass that law.

Thing is, Mell forgot to re-register his weapons last year. At first, he tried blaming it on a staffer failing to do it for him. The other thing is, gun owners are personally responsible for doing this.

Then he tried getting the Chicago Police Department’s Gun Registration Section to allow him ‘to re-register his guns belatedly.’ Not having any provision of law that would allow them to do that, they declined. So what’s an anti-gun elite gun-owning Chicago politician to do?

How does that movie line go? It’s the Chicago way.

Sikanich’s and Gardiner’s legal and career fates are unknown at this writing. But gun owners who can be certain their fate would have already been handed down can take heart that the Alderman is out there doing his part for “commonsense gun safety laws.”

“The #DepartmentOfJustice is bringing a strike force to combat gun violence in Chicago,” he announced on his Facebook page. “Too little, too late…”

Does that include his ward boss?

The line at the end of the neo-noir classic movie Chinatown comes to mind, one that sums up the futility of trying to get justice from a system that is irredeemably criminal. I’ve adapted it for my blog, The War on Guns, and use it regularly when I come across stories about senseless Chicago corruption and guns: