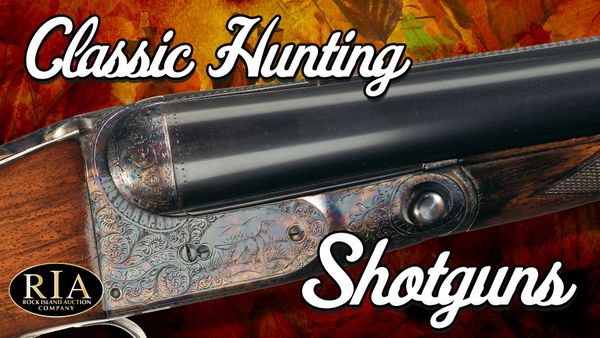 To some, autumn is a time for football and apple orchards and an avalanche of pumpkin spice. For others, the season also evokes images of tall grass and golden fields, of crisp evenings with a faithful dog at your side and a classic shotgun in hand.

The perfect fall means sunrises, jerky, a sturdy 4×4, and a vintage scattergun cradled in your arms.

To the hunter, nothing stirs the imagination quite like a legacy shotgun, the dream of owning a Parker Brothers or a classic Holland & Holland and wondering where they’ve been and what they’ve seen over the decades. A few dings in the wood hint at past excursions, and a bit of wear in the bluing speaks to being fielded through briars, rain, and far-flung snows.

Rock Island Auction Company’s October 6-8 Sporting & Collector Firearms Auction offers a selection of elegant yet attainably priced vintage shotguns for the working man. Gunmakers like Purdey, Westley Richards, and W.W. Greener are just a few of the storied names gracing October’s event, where hundreds of classic hunting arms are waiting to be appreciated by a new owner. Let’s take a closer look at some of the most notable treasures.

As the oldest human tradition, hunting is meant to be passed down from one generation to the next, and few things embody that heritage more than a Parker Brothers shotgun. A gorgeous side-by-side from America’s most famous pre-WWII shotgun manufacturer, this Parker Brothers DHE grade double gun is the definition of affordable luxury.

“The Old Reliable,” as the company dubbed their guns, this 12-gauge Parker from the Remington era more than lives up to the billing. With all original parts, retaining over 80% of its original finish, and hand-assembled with Parker Brothers’ reputable eye for quality, this classic scattergun is a prime example of a firearm that’s both functional in the field and eye candy in the safe.

If you dream of walnut, blued steel, and fine vintage double guns, this Holland & Holland is calling your name. A luxury gunmaker from across the pond, Holland & Holland is a brand typically associated with “Royal” shotguns, crafting museum-worthy pieces for kings and maharajas and the wealthiest of the elite. But this sleek and beautiful side-by-side from 1909 is priced well within reach of the determined collector.

The gentleman’s pursuit of fine arms collecting demands an eye for detail and a taste for the authentic, and anyone who has taken down a waterfowl or upland bird could appreciate the elegant craftsmanship and superior feel of a vintage Holland & Holland from the golden age of double guns. Like the art of hunting and the joy of the outdoors, a quality shotgun is a timeless piece of American tradition.

To the seasoned hunter, a masterpiece firearm can feel at home both adorning the mantle or being fielded on a crisp autumn morning. This engraved L.C. Smith/Hunter Arms Company sidelock shotgun would look great in either setting, another hidden gem with tons of original condition preserved.

L.C. Smith is one of the most iconic names in vintage American side-by-sides, advertised as “The gun that speaks for itself,” but dubbed more casually as the “Sweet Elsie.” The gun became a favorite with bird hunters, who were drawn to the model’s light weight, durability, and ease of balance. The Elsie’s reputation as a reliable field gun is reflected in the gorgeous bird scene engravings adorning some of the examples offered in October’s auction.

The allure of a heritage shotgun is almost intangible. For most hunters, there’s a romance in classic arms, the appreciation of tradition and heritage, the exhilaration of holding a firearm with a story to tell and a legacy to share. Westley Richards is another elite British manufacturer that’s seldom attainable to the average wallet, but several examples in October’s auction keep the dream of owning a high-end vintage shotgun very much alive.

From lightweight bird guns to heavyweights for waterfowling, all Westley Richards shotguns display a consistent standard of excellence. Engraved and checkered, with a brass cornered leather case that carries an air of classic luxury, this Westley Richards double barrel boxlock is yet another quality gun from the legendary Malcom King Collection.

Times change, but the essence of hunting is eternal. The dogs, the birds, the unspoken fellowship between mentor and student. There’s also the desire to own and bequeath a legacy firearm from days gone by, an heirloom cared for by generations prior. And when it comes to timeless double guns, A.H. Fox is a name that evokes quality.

Advertised as “The World’s Finest Shotgun,” Fox side-by-sides were crafted using high grade materials and first-class workmanship. This exquisite example of golden-age gunmaking was certainly built to last, a light, quick to the shoulder hunter’s gun that would make a fine companion in the field today.

A well-crafted shotgun is so much more than the sum of its parts. It’s about finding a piece that shoulders well and swings like a dream, the way it fits in your hands and points. The perfect vintage scattergun combines condition, functionality, and genuine character, and this fine condition Winchester Model 21 checks all the right marks.

Winchester is known for delivering the highest standard of excellence, and this engraved and gold inlaid Winchester Model 21 is a true celebration of artistry and craftsmanship, a firearm that appeals to hunters, collectors, shotgunners, and sportsmen of all stripes. Like many of the guns offered in October’s auction, the price point is within reach of the everyman searching for a centerpiece arm, as well as a sturdy, dependable companion on the hunt.

John Browning got it right with his classic gun designs, and he reportedly said the A5 shotgun was his best achievement. “Five shots under your finger,” adverts touted when Browning’s recoil-operated semi-automatic shotgun hit the market in 1903. Nearly twelve decades later, and Browning’s flagship scattergun still enjoys popularity with shooters and hunters alike.

Known as the “Humpback” due to its trademark squared receiver, the A5 is a versatile workhorse gun for all types of bird hunting, from targeting doves in September to grouse in the February snows. While perhaps not as outwardly glamorous as some of the other shotguns featured here, the Auto-5 is a classic for a reason. When it comes to durability, utility, and function, a shotgun that shoots and shoulders well and tolerates the elements, the A5 is one of the most flexible sporting arms ever conceived.

Offered in many grades and weights, the now discontinued Model 3200 was designed to appeal to a wide audience of shotgunners, a firearm that could excel at trap and skeet as much as taking down waterfowl. With three extra barrel sets, one in 28 gauge, 20 gauge, and 12 gauge, the high condition Remington Model 3200 offered in October’s auction is a versatile shotgun that can be fielded for decades to come.

A Shotgun for Everyone

To the hunter, autumn is the season for roaming the woods with a classic shotgun in hand and a pocketful of shells, a time of clanging dog bells and frosty sunsets and the smell of wood smoke after a long day’s hunt. Rock Island Auction Company’s October 6-8 Sporting & Collector Firearms Auction offers hundreds of vintage scatterguns to choose from, a selection that runs the gamut from side-by-sides and over/unders to pumps and semi-autos, and most fall into a price point that’s within reach of a collector looking to own a piece of tradition.

Fantastic antiques like this engraved Purdey percussion shotgun are offered as well.

The vintage shotguns highlighted here only begin to scratch the surface. True antiques from historic gunmakers like John Wilkes and Boss & Co. appear in abundance. Affordable offerings are available from premier German manufacturers such as Charles Daly and Merkel and J.P. Sauer & Sohn. British giants like W.W. Greener and Webley & Scott are prominently featured, and classic mainstays like the Browning Superimposed, John Browning’s last firearm design, round out the spectacular lineup.

Whether your tastes lie in fine antiques or modern classics, you’ll discover sporting arms that cater to every collecting aspiration.

Rock Island Auction Company has a reputation for presenting the finest publicly available arms and militaria in the world, and October’s auction more than delivers. Elite firearm collections are featured, including over 400 military arms from the phenomenal George Moller Collection.

Everything can be examined firsthand when the Rock Island Auction Company’s Preview Hall opens for exhibition on Tuesday, October 3rd at 10 a.m., a museum you can touch. And don’t forget to check out our new custom auction catalogs that can be tailored to your preference and printed or viewed on an eReader, making the auction experience even simpler no matter how you choose to bid. The date is set. The Preview Hall is waiting. Swing on by and kick off October in style. We can’t wait to see you here!

As always, if there are any questions regarding consignment, registration, or future auctions, please contact Rock Island Auction Company today. Our upcoming auction schedule is updated frequently on our website, so be sure to go through the listing and start making your plans to visit. All our events adhere to the latest COVID-19 guidelines and restrictions.