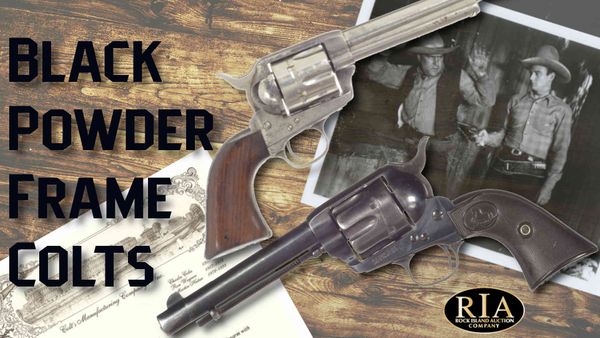 The pinnacle of western Americana, the Colt Single Action Army revolver served as the tool of homesteaders, Indian scouts, Saturday matinee cowboys, outlaws and the men who hunted them.

Famous ownership or historical provenance of a Colt Single Action Army can boost the price into the stratosphere. A well-preserved and well-documented black powder frame model can still draw five- and even six-figure prices. Under the National Firearms Act, a firearm manufactured in or before 1898 is considered an antique.

But what of the Single Action Army owned by the shopkeeper, ranch hand, bank manager, or accountant? What of the ones that perhaps got stuck in a drawer and forgotten, or because of wear and tear received minor repairs? What of the sidearm of regular Joes?

What about Regular Joes?

The Single Action Army revolvers owned by the everyman are still collectable but not out of reach of a collector looking to add one at a reasonable price. A gun enthusiast might want to add one to their collection as an opportunity to take an American legend to their local gun range.

Rock Island Auction’s Feb. 16-18 Sporting and Collector Firearms Auction offers 23 lots featuring black powder frame Single Action Army revolvers, providing the chance to get and use one of these legendary guns. Some of the pistols on offer are early models, manufactured in the 1870s. Three of the pistols are listed as being made in 1874.

The roster of Single Action Army gun owners is a veritable who’s who of American lore, from celebrities to western heroes and villains and all those in between.

The Single Action Army is the gun of entertainers, like John Wayne whose western movie bona fides are without measure. Gene Autry, the singing cowboy, owned a SAA as did jazz singer and gun-collector Mel Torme. Sammy Davis Jr., who was renowned for his trick draw moves had a gold inlaid six-shooter. All of them owned guns auctioned by Rock Island Auction Company. Wayne’s went for more than half a million dollars.

This Colt Single Action Army revolver is part of the Metropolitan Museum of Art’s collection. The “cavalry” model was manufactured in 1874. It can be found in the museum’s Ronald S. Lauder Gallery of Arms and Armor: American Swords and Firearms.

A Colt Single Action Army manufactured in 1874 is part of the Metropolitan Museum of Art’s collection. For the handful of fancy and famous SAAs, there are vastly more that their owners used as they toiled in anonymity.

You can hold the history of the Wild West in your hands with a Colt Single Action revolver. Guns owned by scoundrels and deputies have passed through Rock Island Auction Company. The Frontier six-shooter of Bob Dalton, carried the day of the infamous Coffeyville Raid, and the revolver of Bat Masterson, a legendary lawman of the Old West, who wrote to Colt using stationary from a Dodge City saloon, have been auctioned.

Less well-known men but still of historic countenance, like Navajo Chief Henry Chee and Civil War hero Emory Upton have also had their guns on auction at Rock Island Auction Company. The revolvers of both men sold for six figures each, with the under-appreciated general’s realizing a price of $345,000.

The price of a piece of American history is within reach at this auction. The highest estimated price for the Single Action Army revolvers on auction Feb. 16-18 is $6,000.

In the movies, cinematic giants like Henry Fonda, Clark Gable, and Gary Cooper wielded the Single Action Army in the 1940s and 1950s. Characters of the gritty classics of the 1960s and 1970s, like Butch and Sundance, “The Wild Bunch,” Rooster Cogburn, Navajo Joe, and The Man with No Name blazed across the screen with their six-shooters.

The wild popularity of the Colt Single Action Army belies its slow start in life. Despite the success of the 1851 and 1860 model revolvers, a patent stopped Colt from making a bore-through cylinder revolver.

Rollin White, a one-time gunsmith for Colt, patented a bore-through cylinder design and signed an agreement with Colt competitor Smith & Wesson to manufacture cartridge repeating revolvers. Colt was unable to use the bored through cylinder until the patent expired in 1869.

When that time did come, Colt designed a cartridge revolver for the U.S. government. The 1871-72 Open Top revolver was conceived but rejected. Ordnance officers wanted a more powerful cartridge and weapon. There was also concern about the lack of support for the cylinder.

A year later, Colt added a top strap to support the cylinder and a .45 caliber cartridge. The government adopted both of them.

The revolver started life as Colt’s New Model Army Metallic Cartridge Revolving Pistol with manufacturing starting in 1873. It was produced with barrel lengths of 7 1/2 inches, or the cavalry model, 5 1/2 inches for what was knows as the artillery model, and 4 3/4 inches aimed at the civilian market.

Between 1873 and 1891, Colt shipped 37,060 SAAs to the U.S. government while nearly 100,000 were shipped to militaries and police abroad and to the civilian market. Initially the SAAs’ frame and hammer were case-hardened and the remaining metal parts were deeply blued. Stocks were either black walnut or black hard rubber. You could get one for less than $20.

To the civilian market it was advertised colloquially as the “Peacemaker” and the “Frontier Six-Shooter.” It was shown in an advertisement from October 1877. Across the West, the Colt was used by the Army, settlers, good guys and bad, as well as Native Americans. Thrilling Wild West tales in dime novels and harrowing news accounts of gun battles between cowboys and cattle rustlers likely drove the gun’s popularity.” Veterans appreciated the Single Action Army’s accuracy, dependability, handling, and power.

Though initially chambered at .45 caliber, the “Frontier” was chambered at .44-40 Winchester caliber to share the same cartridges as the improved lever-action model 1873 Winchester rifle. That allowed cowpokes or desperados to only have to carry one type of cartridge for their weapons.

The Single Action Army was chambered in various calibers over the years, 36 in total. One on offer at the February Sporting and Collectors Auction is a British .450 boxer caliber, one of only 2,697 made.

For centuries, gun powder and black powder were synonymous. The recipe for gunpowder over the centuries was simply saltpeter, charcoal, and sulfur. Smokeless powder was introduced in the late 19th century as nitrocellulose. Nitrocellulose is a mixture of cellulose exposed to nitric acid and sulfuric acid – at one time called flash paper or guncotton.

For a more explosive effect, smokeless powder had to be tightly contained in a cartridge surrounded by the firearm chamber, increasing the pressure released.

As the 20th century approached, Colt certified the Single Action Army for use with smokeless gunpowder — at about serial number 180,000. A minor mechanical tweak at about the same time denotes the SAAs made up until that time as black powder frames for collectors.

The Single Action Army is still made, and “Practically unchanged in all major respects, it still holds its popularity wherever a heavy serviceable arm is required for use under trying conditions and away from the possibility of repairs or replacement of broken parts,” wrote Charles T. Haven and Frank A Belden in “A History of the Colt Revolver.”

The revolvers manufactured from 1873 to 1941 are considered the first generation as Colt turned to war production. The draw of westerns at the movie box office reintroduced the gun to the public and Colt began manufacturing the SAA again, with the second generation running from 1956 to 1974.

Colt stopped production again, only to see interest increase along with the interest in cowboy action shooting matches. Production began for a third time in 1976 and is on-going. The company’s website lists a new SAA at $1,799, so an historical piece is not far removed.

Colt’s website allows you to look up the serial number as well as request a letter of authenticity.

History in Your Hands

Books are filled with photos of Single Action Army revolvers, whether they were engraved or gold-plated and meticulously maintained or show the rough use of the ranch hand or herder. Those same books show photos of lawmen, villains, scouts, and cowboys holding their Colt firearms or wearing them on their belts.

A tool that shaped the west and 19th century America, black powder frame SAAs lend a sense of history and manifest destiny to any gun enthusiast’s collection. The Single Action Army revolvers on offer range from a boxed set, several with factory letters, or ones with engravings or inscription, and won’t empty your wallet. Find yours at Rock Island Auction Company’s Feb. 16-18 Sporting and Collector Firearms Auction.

Colt’s Single Action Army Revolver: The Legend, The Romance and the Rivals, by Doc O’Meara

A Look Back at the Colt Single Action Army, by Dave Campbell, americanrifleman.org