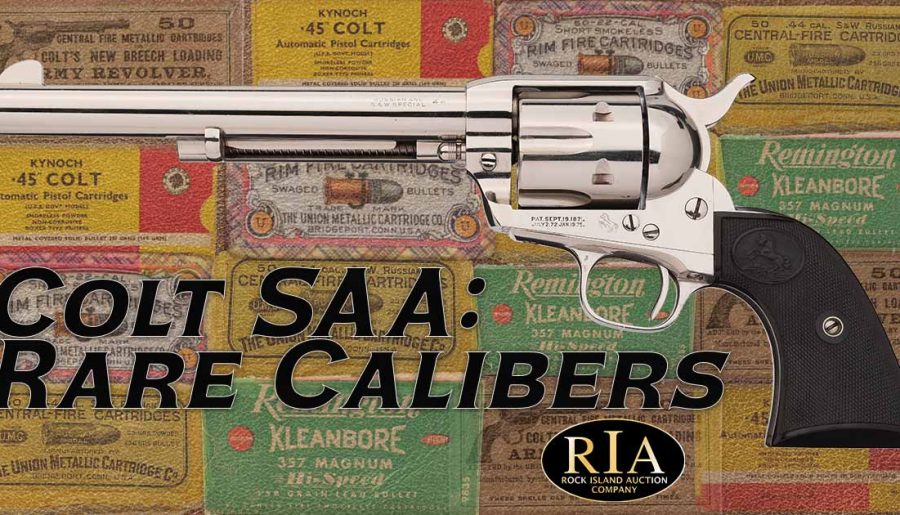 Rock Island Auction Company has sold many beautiful and historic Colt Single Action Army revolvers in its history, and the roster in the Aug. 26-28 Premier Auction follows suit.

Whether it is a Lot Six Cavalry Model, the finest known 1891 Cavalry Model Revolver, or a black powder frame SAA, the 95 first generation Colt SAAs in the auction are simply outstanding. The legendary wheel gun has been owned by presidents, war heroes, and movie stars, putting those guns into elite company, especially when they hit the podium for auction. The touch of a specific inspector, elite engraving, or amazing condition can also launch the Single Action Army into the collector stratosphere. What sets some in this auction apart are the rarity of the caliber in which they are chambered and their extraordinary condition.

Rarity in caliber combined with any other factors like destination, military or law enforcement history, or special accessories can truly set these guns apart. 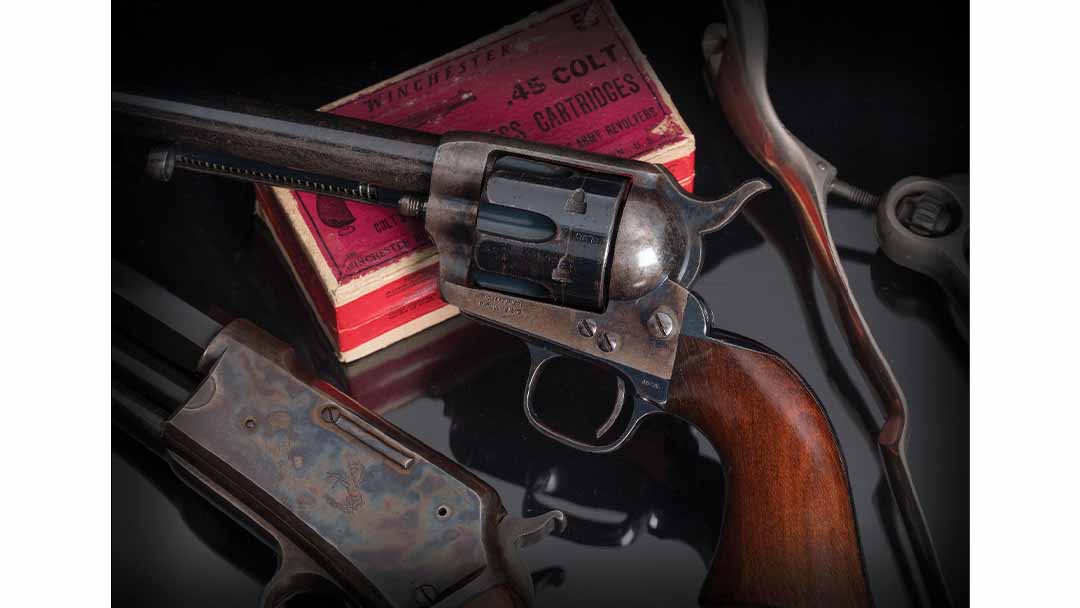 Lot 1187, a Single Action Army with a rare skeleton stock. 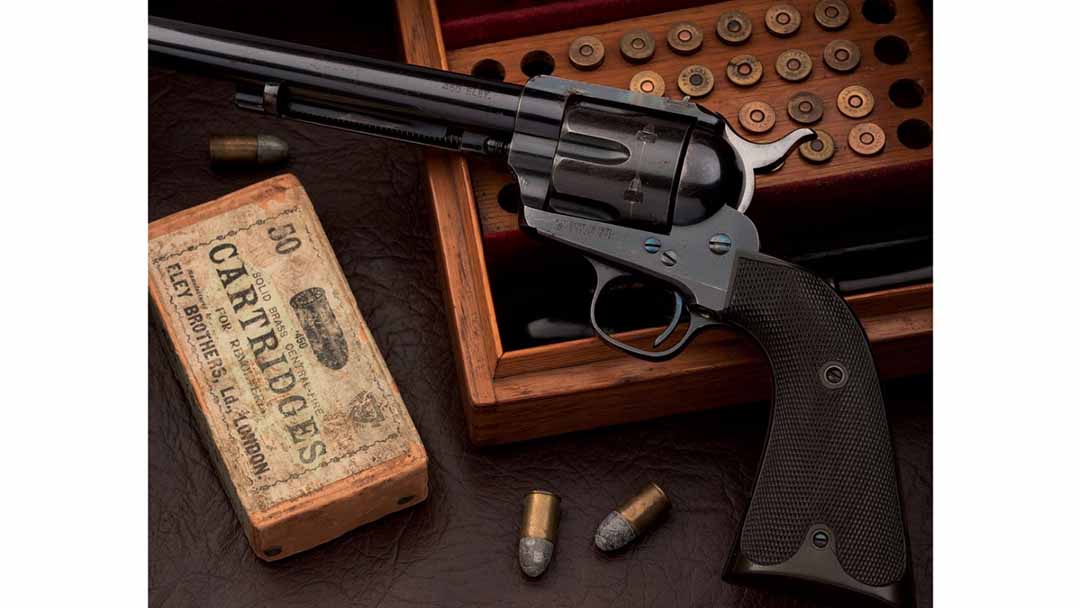 Lot 3144 is a Colt Single Action Army Flattop Target with an elongated grip chambered in .450 Eley, one of a handful of rare British calibers.

Lot 1195 is truly a prized piece of Colt heritage that is worthy of the finest public or private collections. A Colt Single Action Army chambered for .45 ACP, the cartridge developed for the Colt M1911. Its rarity and near mint condition will make this SAA a standout piece to even the most advanced Colt collections. 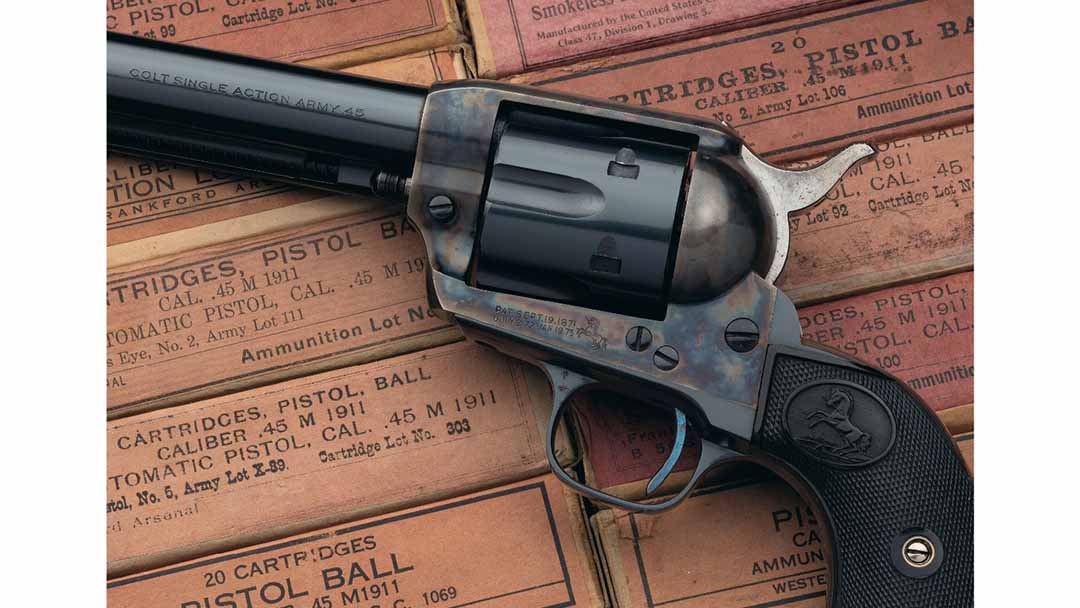 For an American Company, Samuel Colt thought globally, chambering guns for Germany, Russia, and England. Among the rarest is a SAA in .44 Smith & Wesson Russian. Available at auction is a Single Action Army made in 1929 dual chambered in .44 S&W Special/.44 Russian. 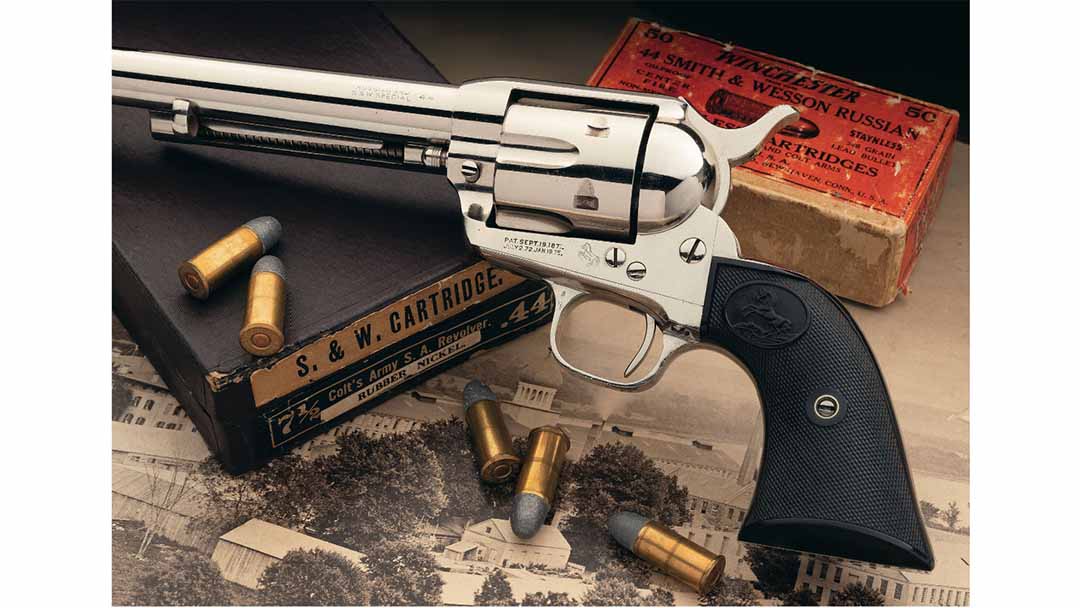 Another European export is a Single Action Army chambered in .476 Eley that also shipped to Colt’s London agency. The British caliber required an over-sized cylinder to handle the cartridge’s rim size. 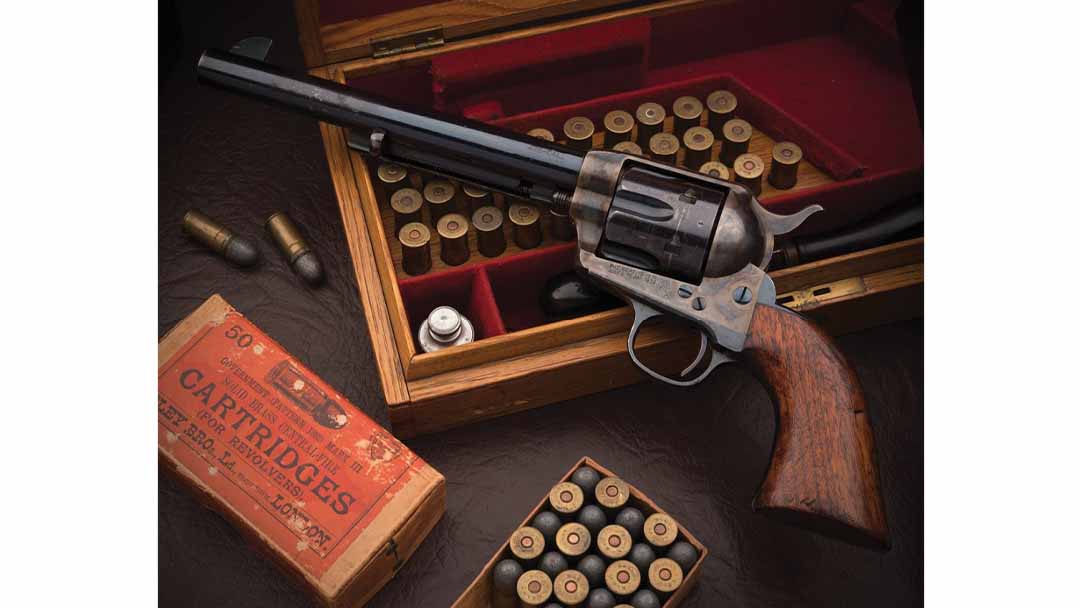 Colt produced 161 revolvers in .476 Eley, like Lot 127, and all were shipped to England. Only a handful have returned to the United States.

While still considering English calibers, Colt also chambered the SAA for other Eley and Boxer calibers — seven in total. The .455 Eley also had over-sized cylinders in the Single Action Army. Colt manufactured 1,150 in this caliber and a mere 110 for the .455 Eley Short cartridge. The SAA in .45 Boxer was first produced in 1873. The cartridge was the same as the .45 Colt, but with less powder and a shorter case that made it hard-hitting, but best only at short range.

Revolvers chambered for .357 Magnum cartridges came along late in the Single Action Army’s first generation. The company made 625 from 1935, when the cartridge was introduced, to 1940 when SAA production ended. These were often used by law enforcement agencies because the bullets could penetrate automobile bodies. Wolf & Klar of Fort Worth was the source of Machine Gun Kelly’s Thompson submachine gun but also sold guns to law enforcement. The store received this SAA chambered for .357 Magnum. 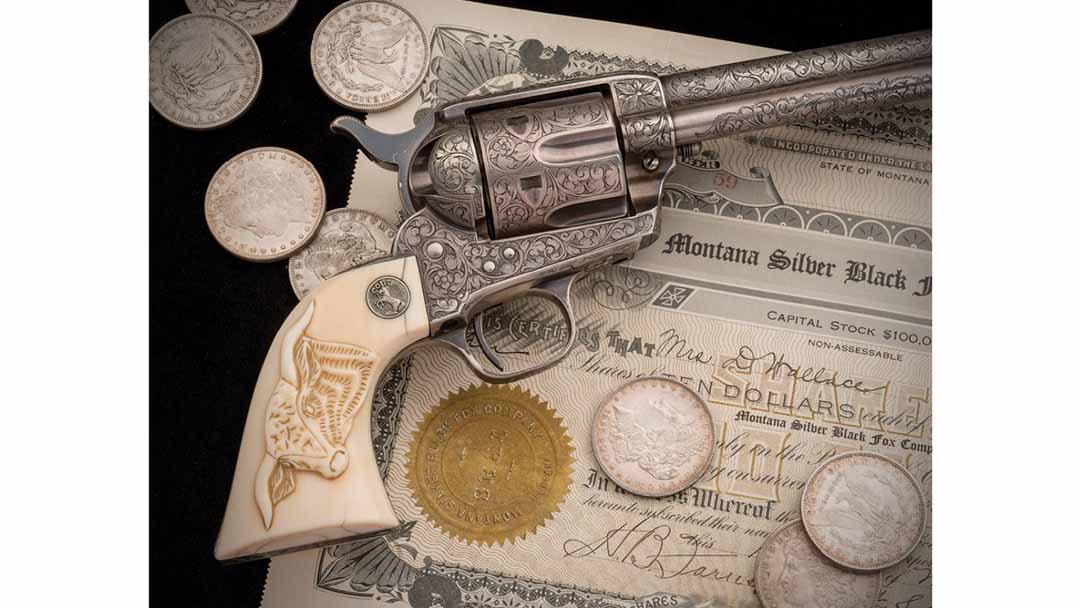 A rarity for being chambered for .357 Magnum cartridges, Lot 136 also has engraving by master engraver Wilbur Glahn, one of only 2,500 first generation Single Action Army revolvers with factory engraving.

Colt infrequently chambered SAAs for Smith & Wesson cartridges. Only 75 were chambered in .44 S&W, and 506 made for .44 S&W Special. 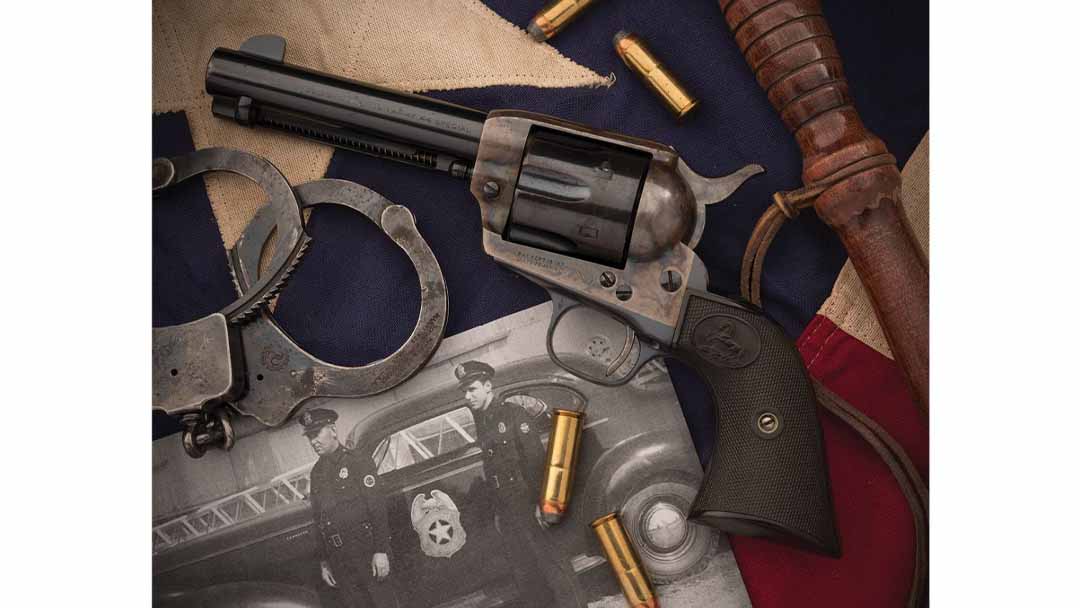 Thirteen Single Action Army revolvers chambered for Smith & Wesson .44 Special with blue finish were shipped to the Beaumont (Texas) Police Department. Lot 1245 is one of them.

On the topic of .44 caliber, 16 Single Action Army revolvers were made with smooth bores. The first was for target testing by the Union Metallic Cartridge Company in 1890. City of Cuyahoga Falls (Ohio) Police Chief R.H. Duffy received the finest known smoothbore SAA in 1931. Duffy was chief from 1922 to 1946.

Colt made 20 SAA for .44 Henry rimfire cartridges. A cut was made in the top of the frame behind the firing chamber to allow the hammer to hit the rim of the cartridges. The hammer also had to be shaped to include a rimfire striker and struck the cartridge two places for center fire and rim fire so it could fire more than one type of ammunition.

Twenty Single Action Army revolvers were chambered for .44 Henry rimfire cartridges and shipped to a buyer in Mexico. Lot 3128 was one of the 20 shipped to Mexico.

A plinking and small game caliber, .22 rimfire is also a rarity among Colt Single Action Army revolvers. The 107 chambered for the round were converted from 100 remaining .44 rimfire revolvers the company couldn’t sell. Lot 1205 is one of them. The barrels and cylinders were replaced for .22 caliber and they were overstamped with .22. 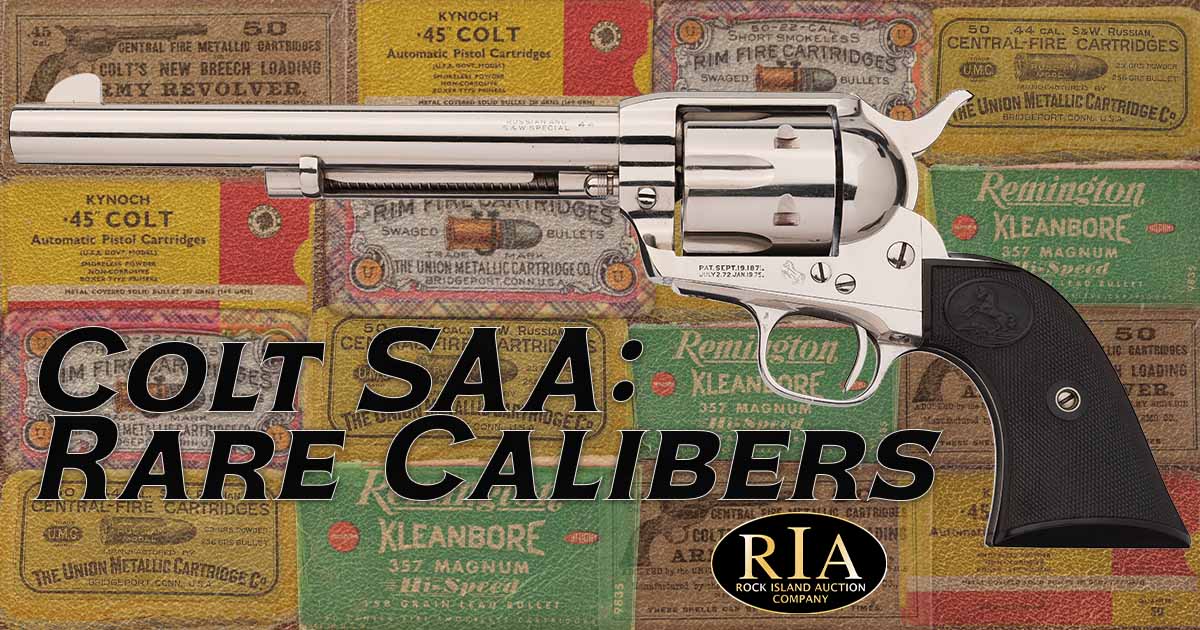