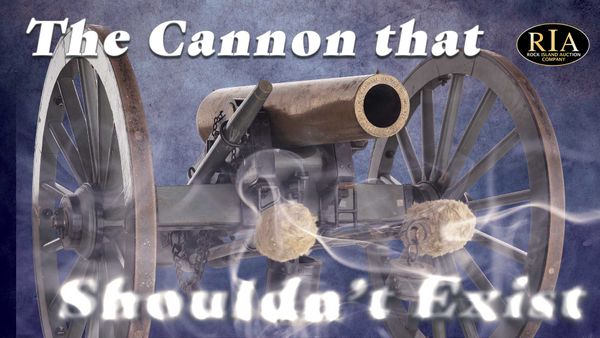 (This article originally appeared in issue 41 of The Artilleryman Magazine.)

For most of us, our first encounter with the Civil War came in our earliest social studies classes. We later find, of course, that many of those precursory lessons were dramatic oversimplifications – as simple and bright as childhood birthday ribbons. However, history is seldom simple and never singular.

Far from a single, sleek ribbon, history is a complex tapestry of interwoven strands – rich and vibrant, nuanced, and with patterns to be seen from afar. One oversimplification that bears such inspection is that of the oft-touted industrial might of the North. Such lessons focus primarily on railroads, telegraph lines, and small arms, but often neglect the subject of field artillery.

Rebels Behind the 8-Ball

Prior to the war, only two of the nation’s seven cannon foundries were located south of the Mason-Dixon line: little Bellona Foundry and the highly efficient Tredegar Iron Works of Richmond, which would produce roughly half of all Confederate cannon.

Such a shortage of cannon production was glaringly apparent to the highest ranks of the Confederate government and military; fighting a war without such firepower would be no war at all. Simultaneously, the call went out not only for government-backed foundries and arsenals, but also for additional production from the private realm. To wit, four Confederate government arsenals were established in a most unenviable position. They were critical to the war effort, but the new foundries, both private and government-backed, lacked even the most essential elements.

Molds did not exist, the copper and tin necessary to make bronze was in short supply, and neither of the existing Southern cannon foundries had begun using the Rodman method of cooling the newly poured cannon from the inside out. Newly christened arsenals were behind the 8-ball, indeed, but with no small amount of pluck, they pressed on.

The Iron Works had been making cannon for the army since the summer of 1861, but by June 1862 it had been leased to the Confederate Navy. They increased the staff, leased more land, and promptly began producing machinery for ships.

However, the Army was still desperately short of cannon and was being substantially out-produced by the North. In 1862, the North had produced 493 cannon, and the South a scant 54.

The birth of Columbus Arsenal coincided with the April 1862 fall of New Orleans. After the city was taken, the Baton Rouge Arsenal found itself perilously close to Union forces, and so was moved to Columbus, Georgia where it became the Columbus Arsenal. By March 1863 the new foundry was finished, and by May production had begun with a possible output of two guns each week according to period newspapers.

These guns were to be the bronze, 12-pounder Napoleons, per the direction of no less than Confederate Chief of Ordnance Josiah Gorgas, a man long credited with reinforcing rebel infrastructure and directly addressing the weapon shortage. He gave notice to all Confederate arsenals on November 13, 1862, a full six months prior to production at Columbus. It read:

Compared to their Northern counterparts, who at that time had been focusing production on Napoleons since mid-1861, it was a step slowly taken, but a step in the right direction nonetheless. With no existing records, Columbus’ overall production numbers differ among scholars of the genre. The lowest agreed number seems to be estimated at 60 and the highest at 80, using projections based on knowing markings.

As of several decades ago, there were just over 30 surviving examples, with more than 20 populating the Gettysburg battlegrounds. Two others live at Rock Island Arsenal Museum, leaving very few to populate the private market. Quite a feat considering the relative productivity of the Columbus Arsenal.

On top of that level of rarity, comes the subject of our story: a bronze, Confederate Arsenal 9-pounder.

As Rare as it Gets

Yes, you read correctly – an American 9-pounder cannon. Anyone well versed in Civil War artillery likely understands that while 9-pounder guns saw use in Europe, they are quite the anomaly in America (aside from a brief flirtation with the idea that resulted in almost 30 purchased in the 1830s). They provided less mobility than a 3-pounder rifle or the then-obsolete 6-pounder field gun and less firepower than the 12-pounder Napoleons. Both the relative lack of mobility and oomph doomed them in the U.S., making any 9-pounder about as rare as hens’ teeth. This is the only known surviving example of its type.

Moreso, this cannon shouldn’t even exist. The aforementioned notice sent by Gorgas specifically ordered that the South’s precious raw materials be reserved for very specific models of artillery, and not only were 9-pounders absent from that list, they weren’t even in use by the Union or Confederate militaries. Why did the Columbus Arsenal take it upon itself to create these small Napoleons?

One could speculate that it was due to a lack of available bronze. After all, in early 1863 Robert E. Lee notably sent almost every bronze 6-pounder from the Army of Northern Virginia to the large Tredegar Arsenal to be melted down for 12-pound Napoleons. He had even written Confederate Secretary of War James A. Seddon the previous December stating,

“I… propose that, if metal cannot otherwise be procured, a portion, if not all, of our 6-pounder smooth-bores (bronze), and, if necessary, a part of our 12-pounder howitzers, be recast in 12-pounder Napoleons.”    – Robert E. Lee

The South was hurting for metal, and the situation wasn’t getting better. By November 1863, the Union had captured the Ducktown copper mines, and, by the following January, mighty Tredegar was producing its Napoleons out of iron.

Somehow, Columbus had avoided this lack of bronze, but whether they utilized a source other than Tredegar or their comparatively low production numbers helped stretch their supply is outside the scope of this article.

Columbus continued producing 12-pounders throughout 1864, totaling almost half of its production. Consider the following: their maximum production capacity was said to be two per week, the earliest known 1864-dated Columbus cannon is #26, and the last known Columbus cannon is the 1864-dated cannon #52. This means that at least approximately 26 bronze Napoleons were cast by Columbus in 1864 – even at maximum production, that would take the full calendar year.

How they maintained their bronze supply a full year after the Confederacy’s top foundry had run out certainly flies in the face of the C.S.A.’s widespread supply issues.

This cannon simply shouldn’t exist and here’s why: It was a size not in use. The aforementioned orders from the Chief of Ordnance Gorgas demonstrates that Confederate bronze was in short supply in 1863. Smaller cannon were being melted down.

As if that odds-defying survival isn’t enough, it then avoided being destroyed in war or becoming a battlefield sentinel like so many of its Columbus counterparts. Its muzzle reads, “No. 5 F.C.H. C.S. ARSENAL COLUMBUS GEO. 1863. 437,” and the right rimbase number is “71”.

Based on its muzzle number, historians presume there were at least four other 9-pounders made (their serial numbers were separate from those of the 12-pdr Napoleons), but they have yet to be seen. This example has been known and featured in books since the 1970s, and with nearly five decades for other examples to make themselves known, No. 5 may truly be the last of its kind.

While past publications indicate that no records exist of these 9-pounders in service, online archives now makes such records available. Two 9-pounder Napoleons are recorded under the command of Colonel John S. Scott (1st Louisiana Cavalry) in eastern Louisiana in early 1864. They were in the battery of a Captain W.P. Barlow (best known for his earlier service in Guibor’s battery), and Scott indicated in a June 19, 1864 report after attacking several Union gunboats that:

“From my experience since here I have but little hesitation in saying that with guns of a proper caliber gunboats can be made very scarce, particularly tin-clads. My 9-pounder Napoleon guns I consider a complete failure, and but little or no service, the carriages being too light.”

The next mention is dated September 15, 1864 when Acting Chief of Artillery Phillips from the Department of Alabama, Mississippi, and Louisiana wrote the following to Major John Rawle, then the Chief of Artillery for the District of North Alabama,

“Your communication asking for two guns, with ammunition and equipment’s complete, for the defense of Coosa bridge has been received and referred to Major McCall, chief of ordnance, who shipped you this morning two 9-pounder Napoleon guns, with 260 rounds shell and 90 rounds canister for same, and directs that you make requisition for the equipments, which will be furnished at Selma. You will direct the officer who takes charge of these guns to exercise care and economy in the use of the ammunition, as no more can be had for this caliber of gun, and the guns will become useless so soon as the ammunition sent you is expended. I have the honor to be, major, very respectfully, your obedient servant, JOS. PHILLIPS, Acting Chief of Artillery”

Given the scarcity of 9-pounder Napoleons, and that Rawle and Barlow had both served under Scott, these are likely the very same 9-pounders rejected by Col. Scott just months earlier, thus making them available to Major Rawle.

Phillips’ letter was sent not even a fortnight after Atlanta had fallen to Sherman, so the Confederates were hurriedly preparing to make “Uncle Billy’s” life as difficult as possible. Cities were being fortified, batteries installed, blockhouses built, rifle pits dug, and redoubts erected. This 9-pounder was part of those preparations at what documents call the “Coosa Bridge.”

Unfortunately, the location of the Coosa Bridge where the two 9-pounders were sent is not specified in Phillips’ letter to Rawle, nor in other documents mentioning the bridge’s fortifications. However, consulting several collectors and historical groups has yielded a possible location.

Statements range from very near the current-day location of the U.S. Highway 280 bridge between Harpersville and Childersburg, Alabama, where the ruins of a fort are known to exist, to another area about 6 miles west (as the crow flies) on land along the Coosa currently owned by the Ernest C. Gaston Power Plant. There, a marker placed by the Alabama Historical Association states that several forts and earthworks were constructed under the command of Major W. T. Walthall to help protect the Alabama-Tennessee River Railroad as it crossed the Yellow Leaf Creek. Like most Confederate assets in the area, it fell during Wilson’s Raid.

Today, the little cannon that shouldn’t have been, waiting for a battle that never was, is big news. In Rock Island Auction Company’s record setting 2021 May Premier Firearms Auction, the Columbus Arsenal 9-pounder, with a carriage, original limber with limber chest, archival documents, and a group of cannonballs was estimated to sell between $350,000 – $550,000.

The auction house knew the rarity of such a piece, but the price far surpassed all expectations, and the little bronze rebel cannon, scarcely recorded and barely known, is now a premier collectible. The cannon sold for $661,250.

History In Your Hands

Missed your opportunity to own the 9-pounder? Take a look at Rock Island Auction Company’s 2022 auction schedule for more chances to own a piece of history. Rock Island Auction’s 2021 lineup featured an impressive variety of cannon, Gatling guns, and rare Civil War arms, and 2022 is shaping up to be just as spectacular.