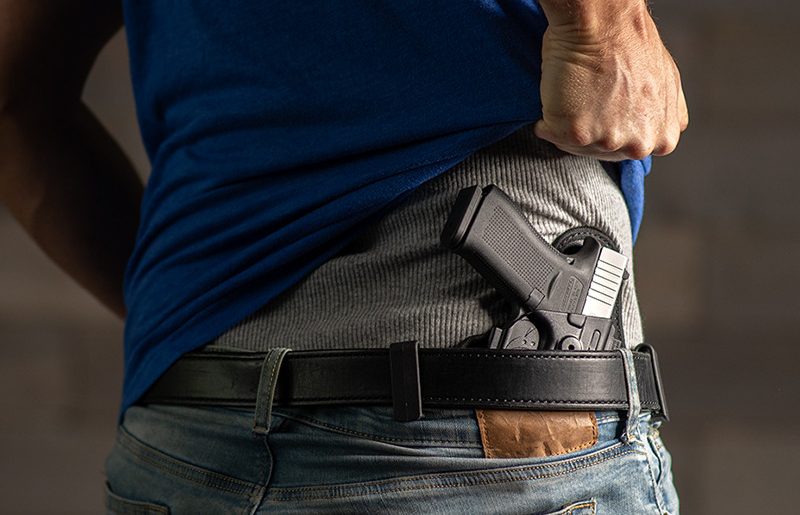 Do you remember the first time that you put a loaded firearm into your holster? That’s the way that you should feel every time you holster your weapon.

Today we’re going to be talking about safety when it comes to concealed carry. You should have a basic understanding of the three main rules of gun safety, with those being keeping your finger off the trigger until you’re ready to shoot, treating every firearm as if it’s loaded and keeping the muzzle pointed in a safe direction at all times. Those basics are going to come up again. 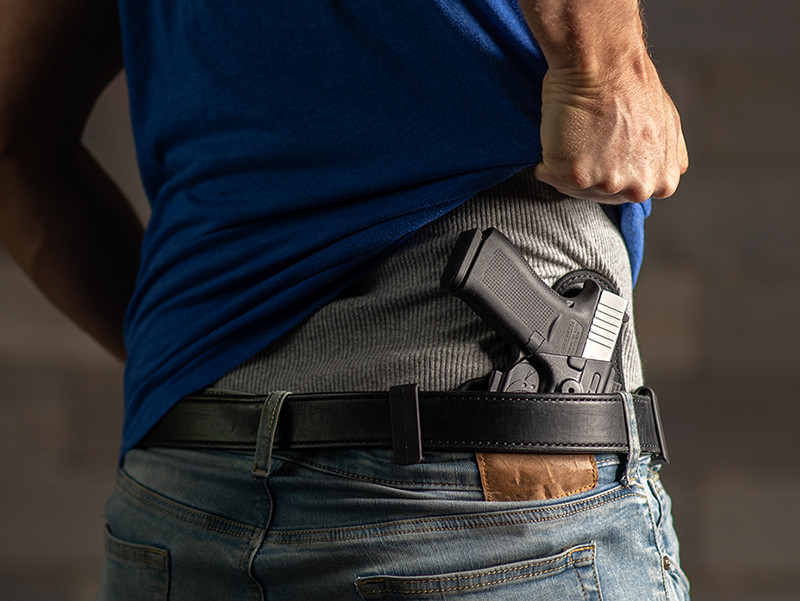 One of the most popular forms of concealed carry is in an IWB holster, and this holster is going to go over your back pocket somewhere between 180 and at 90 degrees, with 90 degrees being on your hip.

The first thing you’re going to want to do is make sure that your gun is completely unloaded. Check it visually and with your fingertips if you can.

You’re going to want to train with all the kind of shirts that you’re going to be wearing in your wardrobe with your holster. You need to practice so you can holster the gun without getting any shirt material inside of the holster.

Then, when you go to draw the gun out of the holster, you’ve got to make sure that you pull up your shirt past the gun, so it’s best to try practice to try to just really pull it up really high. Then you’ve got your gun out and you’re ready to shoot.

Gun Safety Rules And Drawing From A Holster 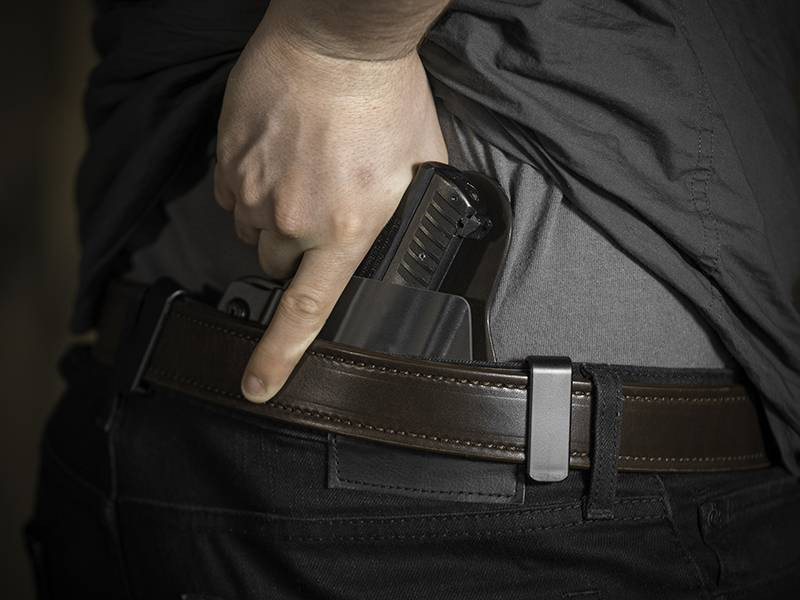 So let’s talk about the safety rules.

You’re going to want to make sure that you’re not pointing that muzzle at anything that you’re not willing to destroy. That goes for your butt cheek, your foot, and the rest of yourself in any way.

So with this holster, when you go to holster the gun you do not want it to be pointed at you. You need to pull up your shirt and look the gun into the holster. At no point should you be pointing the gun at yourself, so find the holster, look the gun in and then you’re good.

It helps to have a good gun belt that’s cinched down properly. Then cover it up and you’re nice and safe. It’s good to practice holstering your pistol, but your first time should be without ammo in it because you never know if you’re going to be going and catching your shirt material in there and that’s not good. So holster nice and safe. Look it in, don’t point it at yourself, and you’re generally going to be safe. 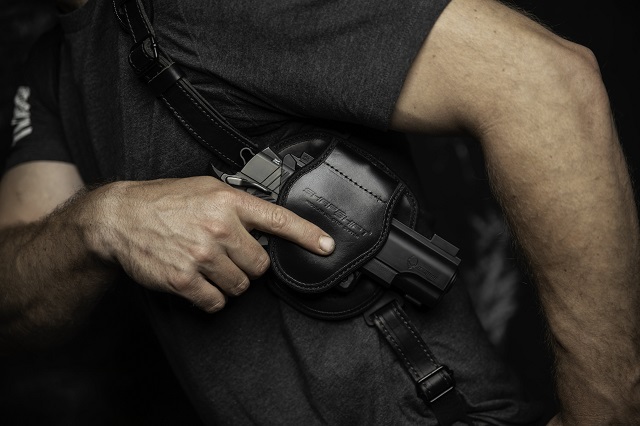 With something like a shoulder holster, it can be a little bit trickier because you’re holstering into this little hole and there’s all this body around you. You do not want to flag anyone else or yourself when you’re going to holster, so you’re going to keep that muzzle pointed in a safe direction. With a shoulder holster, you can lift your arm – there’s no reason to hurry this because you’re just holstering your firearm at this point; there should not be a threat – so you can point the gun down and around not at your foot.

Find the mouth of the holster and insert the pistol. Now, when you’re going to go draw- and it’s best to practice this without a jacket the first time – what you don’t want to do is pass it by your arm. What you want to do is draw the gun, point it at the ground, come around and get on target.

Alternatively, you could lift your arm so that you’re not going to flag yourself but you don’t want to be making yourself into a bigger target. Go to draw but make sure that you’re never pointing the gun at yourself, since you do not want to be pointed a loaded gun at anything you’re not willing to destroy.

After you’ve gotten a feel for it without one, then start adding in the jacket to get a feel for clearing the cover garment and drawing the gun.

There are also some things to know about drawing safely from an appendix holster.

This one is a little bit more controversial for some people because of where it’s at, but there’s no reason to not wear an appendix holster if you’re being safe and following these basic safety rules.

Obviously, the big ones being keeping your finger off the trigger at all times until you’re ready to shoot because you do not want to accidentally pull it if you trip or something, and keeping that muzzle pointed in a safe direction at all times.

Make sure that you draw up your shirt enough to get access to the gun and the holster. When you go to holster the pistol, make sure that you’re not pointing that gun at yourself or at your foot or at your artery a little bit away. Watch it into the holster, and it’s nice and safe that way.

A couple other tips? Make sure that your retention is properly adjusted.
Also, a lot of ranges don’t actually allow you to draw from a holster. A way to get around that is to practice at home. Make sure that your ammo is in a different room entirely and then you can practice as much as you want.

If you want more tips on dry firing we’ve got a video for that as well.
Make sure that you’re staying safe out there. Do your practice, draw at home, do some dry fire, some live fire, do everything you need to do to make sure that you are always pointing that gun in the safe direction at all times especially when you’re holstering and unholstering.