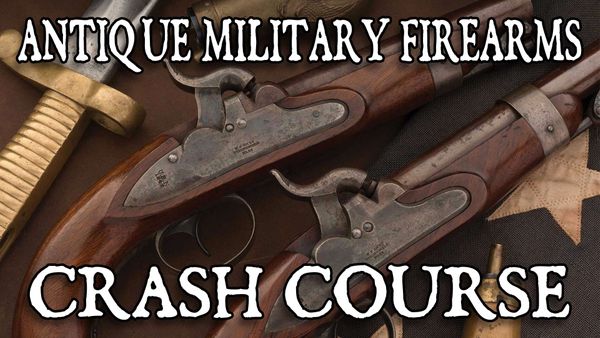 Throughout the centuries, military firearms technology and terminology have been constantly evolving. Given this, there are many terms used to identify military shoulder arms that have long since fallen from use in the present day, which can lead to confusion. On top of this, some of these terms have changed over time or are used inconsistently from country to country or person to person. To better understand these terms and how they are used here at Rock Island Auction Company, take a look through this list of common military firearm terms.

With our upcoming October 6-8 Sporting & Collector Firearms Auction packed to the gills with military firearms, including hundreds of items from the collection of famous U.S. military firearms collector and author George Moller, now seems an excellent time to review some common terms which come up frequently throughout the online catalog.

A musket is a long smoothbore military firearm generally carried by the main infantry, but they were also used by naval forces and others. By the 19th century, basically all muskets could be used with a bayonet, usually a socket type bayonet that locked on either the front sight base or a separate stud.

Though a very straight forward term, this may be the most misused and is often applied to muskets and other smoothbore firearms. In the simplest terms, a rifle is a firearm with a rifled barrel. That is to say, it is a firearm with spiraling grooves cut into the bore inside the barrel. Military rifles were generally shorter than a musket.

Prior to the invention of the Minie ball which allowed rifles to be more easily loaded, rifles were issued in limited numbers compared to smoothbore muskets and were generally reserved for specialized units. Many early military rifles were not designed to mount bayonets. Those that did often had longer “sword” style bayonets than muskets of the same period to make up for some of the lost reach associated with their shorter barrels and allow them to be used as a short sword.

E. Whitney U.S. Model 1841 percussion “Mississippi Rifle” from the George Moller Collection. This model was not originally designed to take a bayonet, but many were updated with bayonet lugs for saber bayonets and used during the Civil War.

These rifles are named after the military units that originally used them. ‘Jaeger’ means hunter in German, and these firearms were initially short hunting rifles before standardized military patterns were developed. Jaeger rifles were originally used in the Germanic states but also adopted and used by Great Britain. Traditionally they had sliding wood patch boxes. By the late 18th century, there were specific military patterns for jaeger rifles in some countries, and new patterns were designed that allowed for the use of bayonets.

Lot 1136 from out September Premier Auction was an 18th century German flintlock Jaeger rifle by G. Heller, from the George Moller Collection.

This term is sometimes used interchangeably with the next term on our list, but it can also be used to refer to a specific variation of martial arms. Here at Rock Island Auction, we use it in the latter sense. A rifled musket is a musket that was originally smoothbore that has been subsequently updated. Many older muskets were rifled after the introduction of the Minie ball. Some late smoothbore muskets like the U.S. Model 1842 were specifically made with thicker barrels, so they could be rifled later. Many rifled muskets are .69 caliber.

A musket length firearm built originally with a rifled barrel. Rifle-muskets replaced the earlier smoothbore muskets in the middle of the 19th century and were the primary firearms of the American Civil War. They are of comparable size to the earlier muskets though they usually were of smaller caliber (.58 for most U.S. rifle-muskets). Like a musket, it generally was designed for a bayonet, most often a socket bayonet, and it served as the primary issue firearm of the era.

Many full-sized military rifles from the early metallic cartridge era following the American Civil War are commonly simply called rifles since muskets were no longer really in use. To add to the confusion, the longer, usually full-stocked versions of some firearms by the late 19th century and early 20th century were often just called muskets rather than rifle-muskets. For example, the Winchester Model 1873 was offered as a short carbine, a regular rifle, and a military style “musket.” All three were rifled and loaded metallic cartridges from the breech. The latter would be more properly termed a “rifle-musket.”

In French, this just meant muskets, but outside of France, fusil is often used to describe a light flintlock musket. In other words, a fusil is a smoothbore military long gun built lighter overall than a full-sized musket and is also usually of smaller caliber than the full-sized muskets (.65 caliber, aka “carbine bore,” is common). Before martial arms were more standardized across European militaries, there were fusiliers who used these lighter flintlock muskets while the main infantry were still generally using heavy matchlock muskets. Later on, fusils were used by officers and light infantry.

Lot 1130 in our September Premier Auction was a beautiful silver mounted officers fusil by Twigg from the Revolutionary War era that is featured in ‘George Moller’s American Military Shoulder Arms, Vol. 1.’

A fowling piece is a smoothbore sporting long gun designed for hunting fowl. They often had very long barrels. Fowlers were replaced in the 19th century by short more general purpose smoothbore hunting guns (shotguns). They weren’t called shotguns in the 18th century as the vast majority of firearms were smoothbore and could fire shot. Fowling pieces were common firearms in the American colonies and were often used by militiamen. During the French & Indian War and American Revolution, many were altered, so that they could be used with a bayonet (sometimes these altered or “militarized” fowlers are known as “fowler muskets”).

Lot 1303 in our past September Premier Auction was a 1716 dated fowling piece by Lauren Le Languedoc of Paris, formerly in the W. Keith Neal Collection.

In a general sense, carbines are typically shorter arms often intended for cavalry or other mounted use and were also issued to other units needing more mobility such as the artillery. Most were smoothbore throughout the muzzle loading era, but rifled carbines were also made. There were also hunting carbines which were more often rifled.

This term and the next few are often used interchangeably. Here are Rock Island Auction Company, we generally stick to using blunderbuss for all of these arms to keep things more straight forward. A blunderbuss (from the Dutch ‘donderbus’ or thunder pipe) is a smoothbore short barreled long gun with a flared muzzle that aids in loading powder and loose shot. Depending on the design of the bore, the belled muzzle can also help create a wider shot pattern. They were used both on land and sea, and the blunderbuss was especially useful for defending ships from boarders and carriages from highwaymen, though they were sometimes fielded by cavalry as well.

This term gets more use in Europe than in the U.S. but is sometimes used here as well. As mentioned in the blunderbuss section, blunderbusses were often carried to defend coaches. A coach gun is essentially a blunderbuss designed specifically for defending a coach. Later, the term was adopted as a “coach gun” for short double barrel shotguns that were employed in this role in the 19th century, most famously in the American West.

British coach guns were issued to the Royal Mail coaches to defend against highwaymen and were also widely used to protect the private carriages of the elite.

This may be the most confusing term on the list. Musketoon has been used variously over the last several hundred years. In early usage, it is believed that a musketoon was essentially a blunderbuss for sea service use. By the 19th century, musketoon was used in many instances to describe a short smoothbore carbine with a straight bore rather than the flared bore of a blunderbuss. The Smithsonian says a musketoon is a short blunderbuss, but many would call the gun they describe just a blunderbuss.

By some definitions, a musketoon fires the same ammunition as a full-sized musket while a carbine is smaller bore and thus fires smaller ammunition (carbine bore in England was .65 caliber vs .75 caliber for the full-sized Brown Bess). Others say, a musketoon is a short firearm of larger than musket bore. The simplest and broadest way to look at it is that a musketoon is a short military shoulder fired firearm. Unless a specific model is generally known as a musketoon, we don’t tend to use this term much.

Documented U.S. Springfield Model 1847 percussion “Navy” musketoon. This is a good example of how the term musketoon can be confusing. The Model 1847 Navy musketoon is basically a carbine.

A swivel gun is a large bore gun mounted on a swivel, designed to be fired from a boat. Some are essentially small cannons, but others resemble a large blunderbuss.

A British naval swivel gun. As you can see, this example is essentially a massive blunderbuss.

These vary in design by era and location, but generally speaking, these are basically oversized muskets firing large round balls and/or loose shot meant to be fired from a rest from a fortification. They filled roles between light artillery and regular infantry arms and could be surprisingly accurate over very long ranges.

Lot 4219 in our October sale last year was a large flintlock amusette.

I hope you’ve found this primer on antique military long gun terms helpful. They can be confusing at times for sure. Once you throw in matchlock, wheellock, snaphance, etc. you can really get into some wide variations of military firearms reaching back hundreds of years.

Definitely take a look at the full October Sporting & Collector auction catalog online and check out the wide array of martial arms offered in the sale. Keep your eyes peeled for our December Premier Auction as well as it will include the third installment of firearms from George Moller’s collection along with tons of other military firearms from other celebrated collections. You won’t want to miss either of these sales!