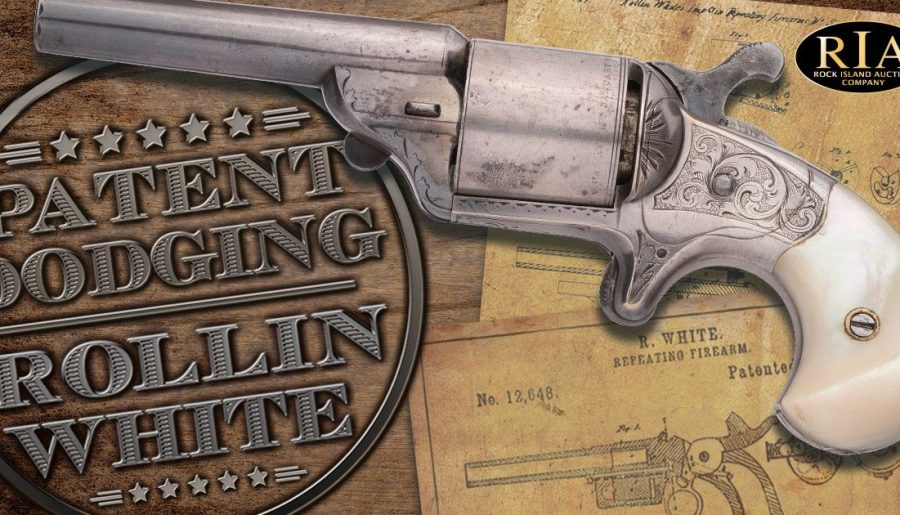 Revolvers remain the products the company is still best known for today even after they diversified into semi-automatic pistols, rifles, and other products. A number of Smith & Wesson revolvers, including early models, as well as the Colt Single Action Army revolver that surpassed Smith & Wesson are available in both the Oct. 4-7 Sporting and Collector Auction and the Dec. 9-11 Premier Auction. 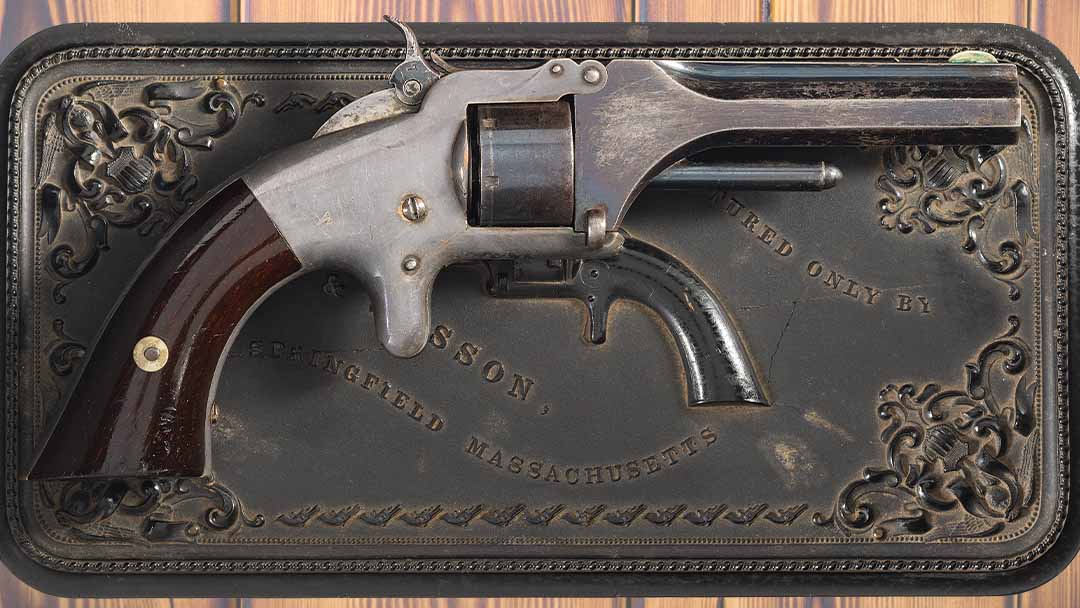 The design was technically covered by Rollin White’s repeating firearm patent that combined a cylinder and a box magazine that was completely unworkable. The Smith & Wesson revolver had a very different design aside from having a bored through cylinder. White’s patent was not truly the first design for bored-through cylinders given that pinfire revolvers were already in production in Europe by this time. 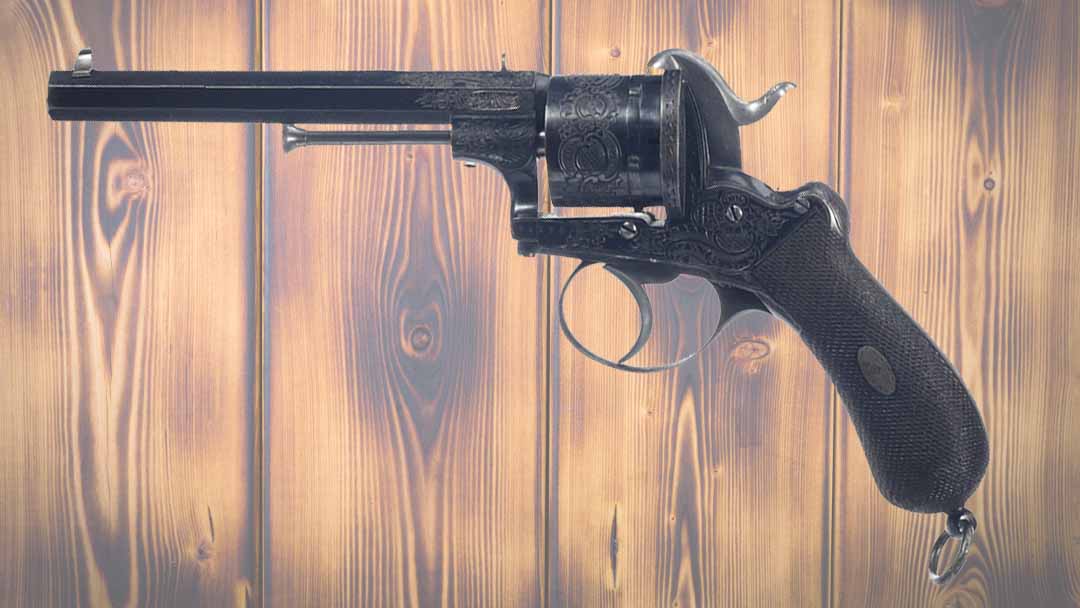 European pinfire revolvers already had bored through cylinders prior to Rollin White’s patent and designs like this Francotte Lefaucheux Pattern Double Action Pinfire revolver remained popular. Thousands of Lefaucheux revolvers were imported for use during the American Civil War.

Regardless, this American patent allowed Smith & Wesson to largely prevent their domestic competitors from manufacturing metallic cartridge revolvers until the patent expired in 1869, leading to some odd innovations in attempts to dodge the patent. Some companies simply openly defied it and manufactured conventional rimfire revolvers that were advertised in catalogs by Schuyler, Hartley & Graham, newspapers/magazines like Harper’s Weekly, and others. Many of these attempts were thwarted by legal action. 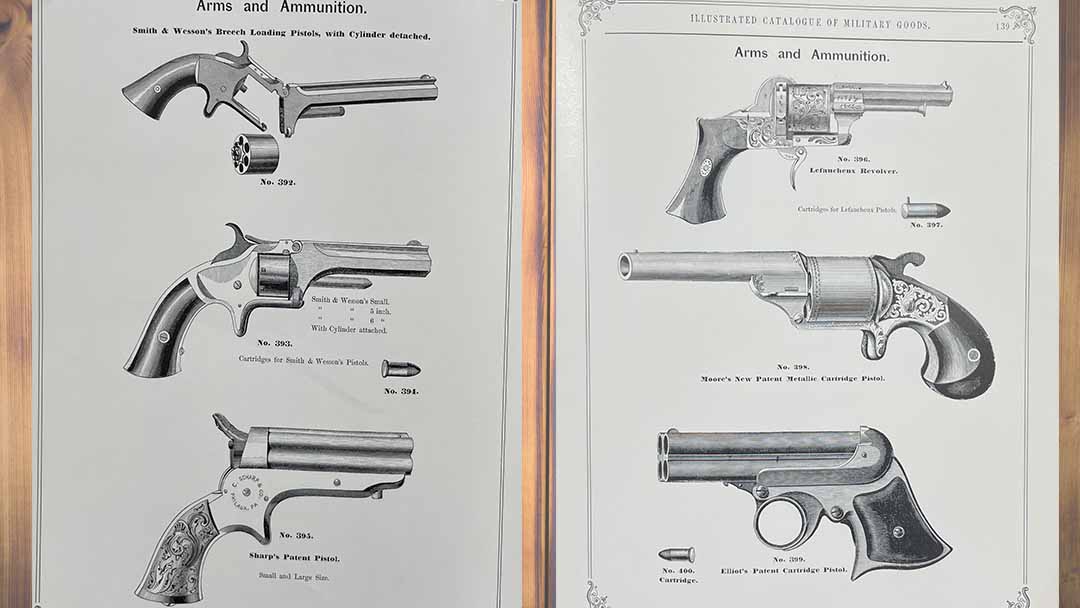 Schuyler, Hartley & Graham was the largest firearms dealer in the United States during the Civil War. The company’s illustrated catalog offered several guns available for private purchase, many of them revolvers that would violate Rollin White’s patent or at least try to work around it.

One way to avoid the bored through cylinder design was simply to make multi-barreled pistols. For centuries multi-barrel firearms provided quicker follow-up shots, but some of the early cartridge pistols were innovative designs. One of this writer’s favorites is the Christian Sharps designed Sharp Pepperbox which came with four barrels in multiple variations and calibers in a compact package. Instead of the barrels rotating, the striker on the hammer rotated each time it was cocked. Remington also introduced a design by William H. Elliott similar to the Sharps pepperbox but with a ring trigger that actuated the hammer. The Rupenter’s Eight Shot used a rotating barrel group like the percussion pepperboxes. 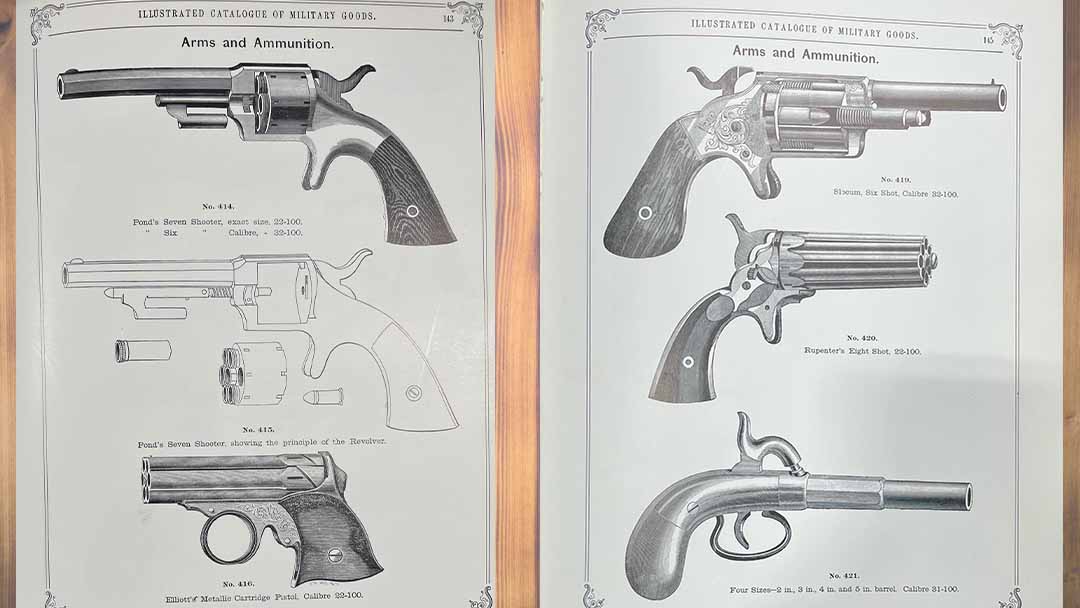 The pages of the Schuyler, Hartley & Graham catalog show several examples of guns with multiple barrels that could provide a higher rate of fire and worked around Rollin White’s bored-through cylinder patent.

One of the stranger designs was the Slocum revolver. It has a six-shot cylinder, but the cylinder has individual chambers that slide. A fixed ejector pushes the cartridges out of the chambers one at a time when the chambers are slid forward. Lucius W. Pond’s revolver similarly had removable chambers as a way to maneuver around the White patent.

Lucius Pond, Ethan Allen, William H. Prescott, and others also designed traditional revolvers with bored-through cylinders in violation of the patent. Pond and other manufacturers were sued and lost to Smith & Wesson. After their loss, some of their revolvers after the lawsuit were marked “MANUF’D FOR SMITH & WESSON PAT’D APRIL 3, 1855” referencing the White patent. 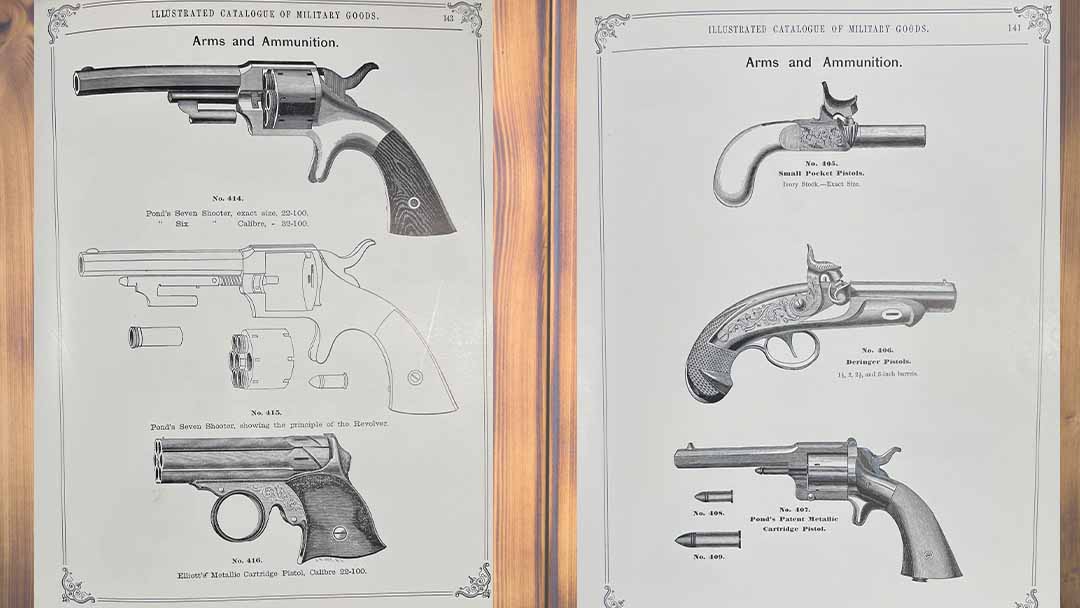 E. Remington & Sons was one of the first companies to manufacture cartridge revolvers in compliance with the White patent by manufacturing rimfire conversions of their popular New Model Army revolvers under contract with Smith & Wesson and paying a fee. These were mainly sold through Benjamin Kittredge & Co. Despite this head start, the company struggled to maintain a solid foothold in the revolver market in the 1870s and were outcompeted by Smith & Wesson and Colt. 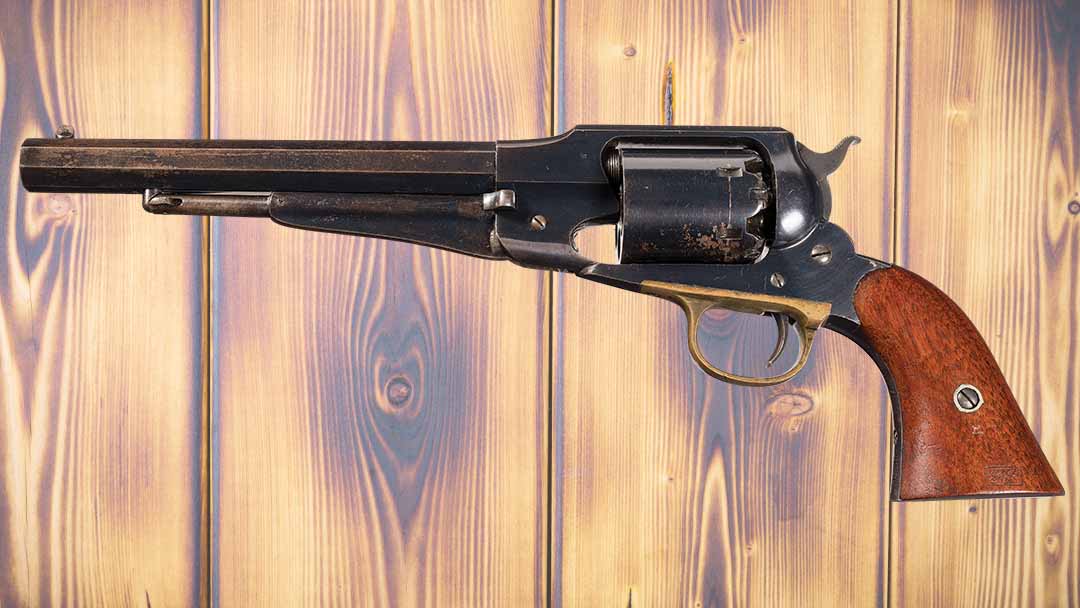 By the time the Rollin White patent expired, Smith & Wesson had positioned themselves as the leader in metallic cartridge revolvers, and their No. 3 American and Russian revolvers were ordered under contract for the militaries of multiple countries in the early 1870s. Soon they faced competition once Colt introduced their Model P (Single Action Army) designed by William Mason and Charles Brinckerhoff Richards for the 1872 U.S. Government service revolver trials.

Colt won, but Smith & Wesson got another chance two years later when they were contracted to produce the No. 3 with improvements by Major George W. Schofield, instructed to chamber the revolver for .45 Colt. Had they chambered the Schofield in .45 Colt as instructed instead of the shorter proprietary.45 Schofield cartridge, the Schofield may have become the most iconic revolver in history. 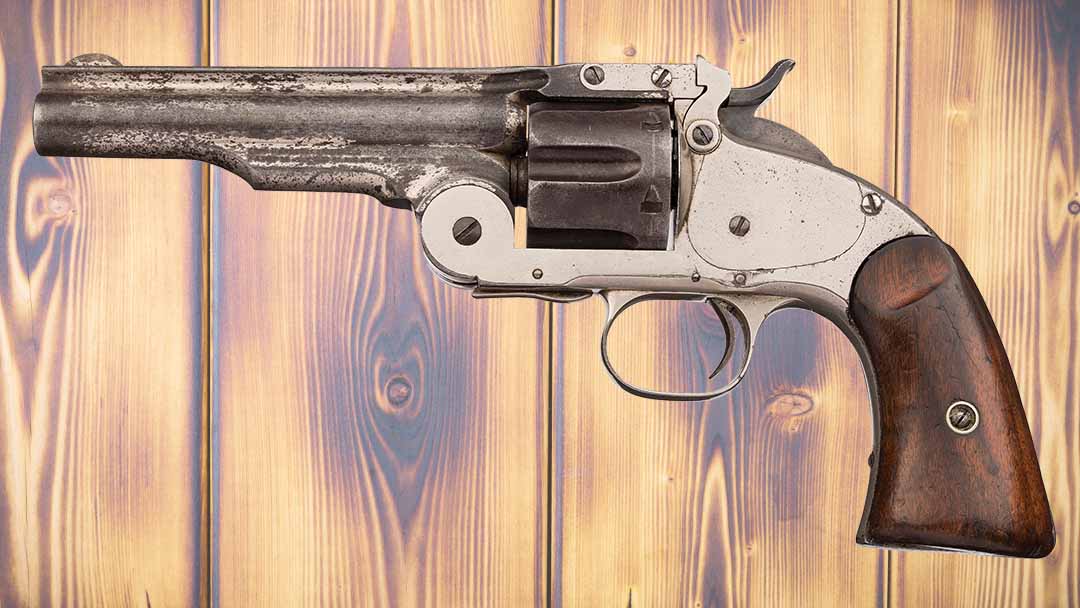 Instead, the Colt Single Action Army ran away with all the fame thanks to its adoption as the official sidearm of the U.S. Army, and the government discontinuing future orders of Smith & Wesson top break revolvers. Nonetheless, Smith & Wesson remained close behind and produced many excellent models in the later part of the 19th century and continues to be one of the most popular revolver manufacturers today. 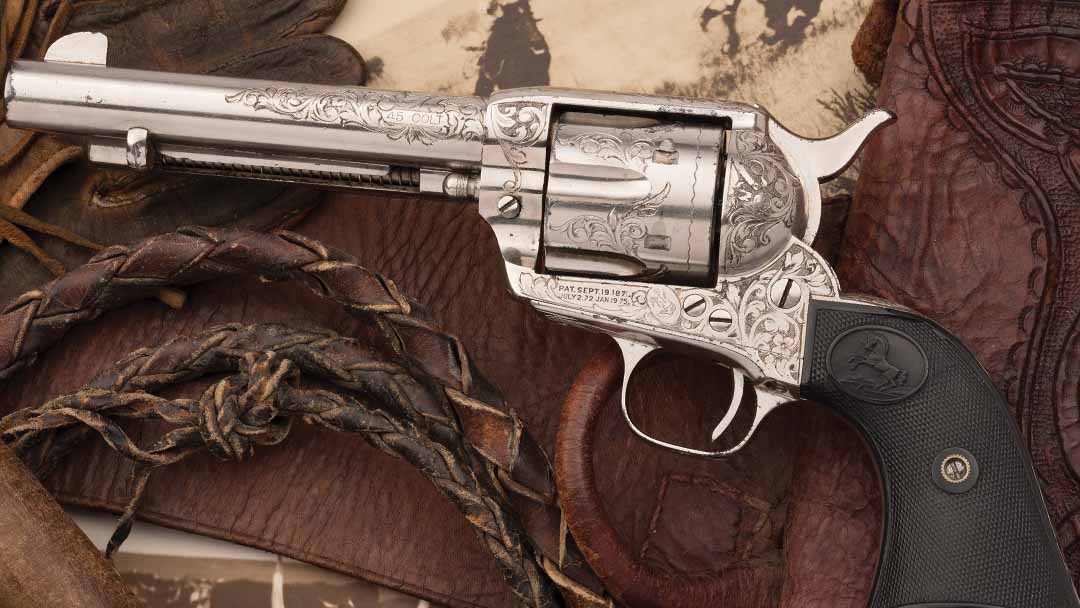 The Colt Single Action Army, manufactured starting in 1873 after Rollin White’s patent expired, has become one of the most recognized handguns of all time. More than 160 will be on offer in the Oct. 4-7 Sporting and Collector Auction. This factory engraved Colt Single Action Army shipped to famed Fort Worth dealer Wolf & Klar will be available in Rock Island Auction’s Dec. 9-11 Premier Auction.

A number of iconic Smith & Wesson revolvers are available Rock Island Auction Company’s upcoming Oct. 4-7 Sporting and Collector Auction as well as the Premier Auction, Dec. 9-11, ranging from the Model No. 1 to the Schofield serial number 1 to more modern guns like the USAF M13 Aircrewman double action revolver and .44 Magnum Pre-Model 29. 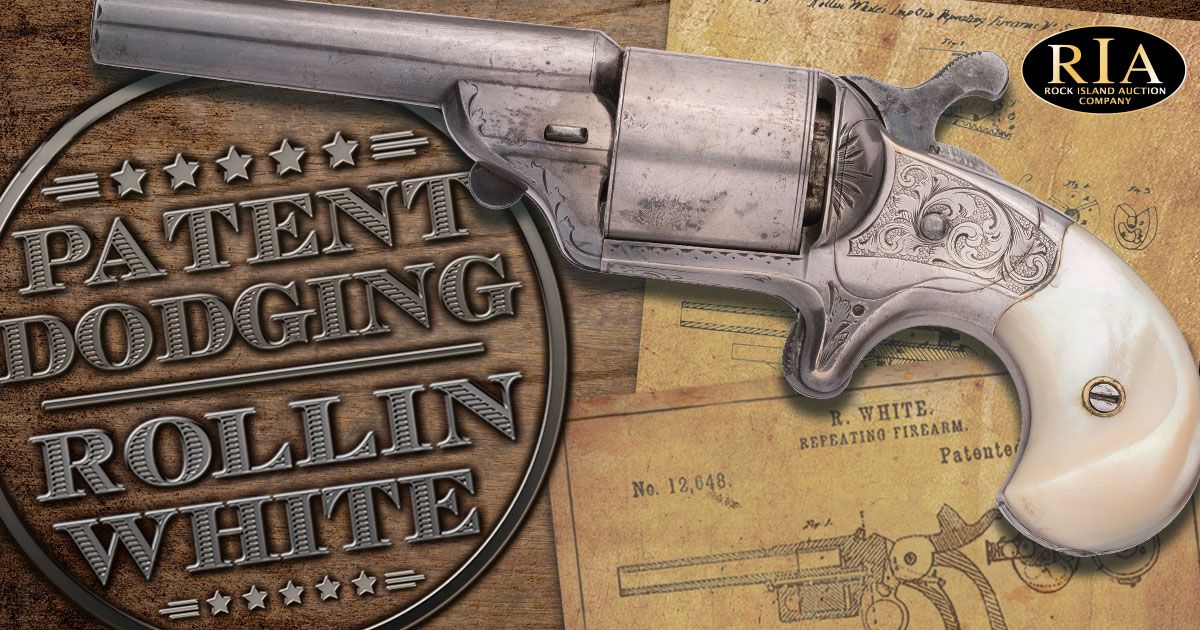