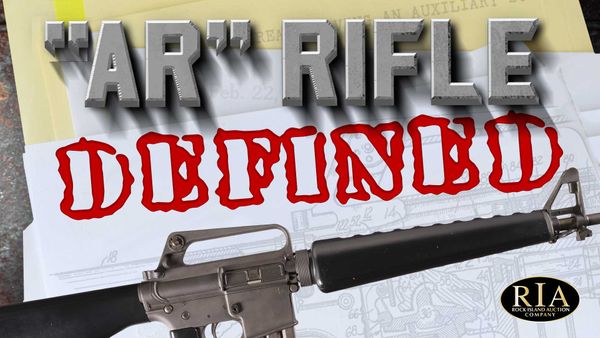 Feel free to move on to the next article if you want, because there’s your answer in a nutshell; contrary to what some folks on the internet are saying, the “AR” in “AR-15” does not stand for “Assault Rifle”. But if you want more details, they can be found below.

During the last month or so of 2021, I started seeing a recurring statement popping up on some social media sites. Specifically, a repeated statement that the “AR” in “AR-15” stands for “Assault Rifle”.

Now, I believe in the Second Amendment, and I also believe that A) the right to keep and bear arms is not a legal obligation to keep and bear arms, and that if you, reading this, decide the proper number of firearms in your home or in your life is zero, then that’s your call, and B) that using civil means to try and address what you feel are flaws in the political system and the laws of the land (including appeals to the public) is perfectly valid, but anyone repeating “AR means Assault Rifle” is lying, either knowingly or unknowingly by repeating someone else’s statements without using proper scrutiny.

The latter is a problem that has been made ever worse by the growing footprint of social media; the notion that a lie is around the world before the truth has even laced up its shoes has never been more true.

So, we need to break things down a bit to get all the relevant information out and on the table.

When it comes to talking about assault rifles in the United States, we run into a big problem; specifically, that there is more than one relevant definition of “assault rifle” in this country. Two of them are relevant to this topic, the older one and the newer one.

The Old One: An intermediate caliber rifle, capable of selective fire, intended for use by infantry.

The Newer One: A semi-automatic rifle, pistol or shotgun, the former two being fed by a detachable magazine, having two or more out of a list of restricted features, as well as a number of explicitly named weapons.

The former was defined in a somewhat informal matter. The concept of giving infantry a smaller caliber rifle, sacrificing striking power at range for a reduction in weight and recoil. An increase in ammo load had been kicked around for years during the early 20th century, with a number of John Pedersen’s designs coming close by upgrading from bolt action to semi-automatic and swapping out a reduced caliber round for the standard 30-06.

Birth of the Sturmgewehr

The idea, and the name, became better defined in the 1940s with the development of the German MP44, a full auto rifle chambered for a shortened 8mm cartridge. Reportedly, it was Hitler himself who dubbed the weapon the “Sturmgewehr”, which literally means assault rifle.

The Soviets followed a similar path with their AK-47, retaining the 7.62mm diameter of their previously issued Nagant and Tokarev rifles, but adopting a reduced powder load and case size, while NATO (after spending multiple decades with full powered battle rifles like the M-14 and FAL) opted for an overall reduction in caliber, introducing the 5.56mm NATO cartridge for the M-16 rifle. While there are differences in execution, this concept has become the de-facto standard worldwide, with few forces bucking the trend.

The Colt M16A1 is lighter than then M-14 battle rifle and used a smaller caliber ammunition.

The newer definition of assault rifle was set by the Public Safety and Recreational Firearms Use Protection Act, a piece of legislation better known as the Federal Assault Weapon Ban of 1994, or FAWB. For the period of 1994-2004, this law restricted what firearms could be bought, sold, and owned by American citizens, with a heavy emphasis on “military style” weaponry that was not previously restricted. Notably, this law explicitly targets semi-automatic weaponry; any old definition “assault rifle” was, by law, not a FAWB “assault rifle”.

Opinions vary on if this law was a good or bad idea (given where you’re reading this, you can probably guess what my opinion is on the matter), and for the most part it did not accomplish the stated end goal of reducing firearm-related crime/violence. But like it or not, the law and the debate around it redefined “assault rifle” in the public eye, and the definitions it created are what most people think of when the word “assault rifle” is used, which creates problems when trying to have a conversation about weapons.

Is My Gun an Assault Rifle?

So, let’s pick an AR-15 style weapon and run it through the filter. Rock Island Auction’s February Sporting & Collector Auction features numerous AR-15 rifles, including this Colt AR-15 SP1. Is it considered an “assault rifle”?

Old Definition: No. As a commercially made semi-automatic, it doesn’t meet the criteria.

Newer Definition: Yes. It is a semi-automatic rifle with a detachable magazine, and has 1) a pistol grip, 2) a bayonet lug, and 3) a flash hider. It would be restricted from sale to the average person on the street.

Depending on which definition you pick, the AR-15 SP1 both is and isn’t an assault rifle.

Custom rifles like this belt feed Colt AR-15 A2 HBAR Sporter blur the line even further, though its pistol grip and flash hider would likely be enough to make it an “assault rifle”.

Back to the Source: A Word on ArmaLite

So what does AR actually stand for? The answer is ArmaLite, the American small arms company founded in the mid 1950s that created a developed types of light automatic rifles.

Manufactured shortly after the acquisition of the AR-15 patents from ArmaLite, the full automatic Colt Model 01 is a textbook example of the “older definition” of assault rifle, and it’s semi-automatic descendants would become the most famous of the “assault rifles” defined in the 1994 Federal Assault Weapon Ban, as well virtually becoming a genre unto itself in modern commercial firearms.

The Old Definition: A subsidiary of the Fairchild Engine and Airplane Corporation established in 1954, and was active until the 1980s. This ArmaLite was chiefly a design and development house, with enough in-house resources to produce their own prototypes but generally partnering with outside firms for main-line production.

The Newer Definition: An independent firm established in 1996 using the designs and trademarks from the former ArmaLite. This ArmaLite was intended as a manufacturer from the word go, and made a name for themselves with variants of the AR-10 and AR-15 variant rifles and carbines. The firm is still active, and many ArmaLite rifles on the market are their work.

Did the original ArmaLite think that “AR” meant “assault rifle”?

AR-1: Also known as the “Parasniper”, ArmaLite first design, a bolt action rifle using a then-novel combination of a fiberglass filled external stock around a metal internal chassis for reduced weight without compromising rigidity. Not an assault rifle by either definition.

AR-3: A full power battle rifle chiefly built as a test bed for experimental features. Not an assault rifle by either definition (full auto weapons fall outside the scope of the FAWB, and if it were made semi-auto it wouldn’t have enough features to qualify).

AR-5: A bolt action 22 caliber survival gun. Not an assault rifle by either definition.

AR-7: The “Explorer”, a 22 caliber semi-automatic survival gun. Not an assault rifle by either definition.

AR-9: A semi-automatic, 12 gauge shotgun. Not a rifle, and not an “assault shotgun” by FAWB definition due to lack of listed features.

AR-10: A full power battle rifle with select fire capacity. While never achieving the fame of the AR-15, many of the mechanical principles that underpin the AR-15 were refined in this model, it did find some fans and adherents, and experienced a revival in later years among customers looking for a little more striking power in their self-loading rifle. Not an assault rifle by the old definition. Original models fall outside the FAWB due to being machine guns. Newer semi-automatic models are not called out by name in the FAWB, and would need to be evaluated on features.

AR-11, 12 and 14: A set of intermediary development steps toward the AR-15, some were derived from the older AR-3, and came in a mix of calibers. The 11 and 14 were made in intermediate calibers, and would meet the older definition, and could meet the FAWB definition dependent on features if made semi-automatic, though like the AR-10 was not called out by name.

AR-13: A machine gun intended for aircraft mounting. Records on this one are pretty limited, with some suggesting that it never even got off the drawing board. Fails both definitions, if it exists.

AR-15: The much more popular child of the AR-10, sold as both a select fire rifle to military and police buyers, and as a semi-automatic rifle to civilian buyers. The AR-15 was called out by name in the legislation, making it an FAWB assault rifle by default… but Colt (then the primary license holder, having bought the design off of the original ArmaLite) had no trouble selling HBAR Sporters, Delta Elites, 9mm Carbines, and sundry other weapons that were just the AR-15 with the offending features removed and the then-radioactive name replaced with something less likely to make a senator faint.

So where does that leave us? As shown, very few of the designs ArmaLite were working on were assault rifles by the modern, FAWB-inspired definition of the phrase. Those that did meet that definition were typically made by outside contractors.

Further, these items were designed in the 1940s through the 1960s; unless Eugene Stoner, ArmaLite’s Chief Design engineer, had a time machine (which, admittedly, would explain a lot), there is not a chance in hell he was considering the outcome of a legislative session 30ish years in the future.

The ArmaLite AR-7 Explorer, a semiautomatic rifle that has found a niche with pilots, boaters, and outdoors enthustist as a lightweight emergency survival rifle.

More of ArmaLite’s designs fit the older, military-focused definition, because that term actually existed at the same time the original ArmaLite was active, but that falls beside the point; most people who are wringing their hands over the topic of “assault rifles” don’t even know that there’s such a thing as a legally ownable machine gun out there for them to wring their hands about.

The meaning of “AR” in “AR-15” is just one of many common gun myths, and we tackle these topics and more in our firearms blog. From the convoluted ATF pistol brace point system proposal to the broken FOID card identifications certain states require, Rock Island Auction Company covers it all, so be sure to subscribe to our email for more weekly content, and check our our 2022 auction schedule for the latest firearms auction catalogs. It’s shaping up to be a fantastic year!