EL PASO – -(AmmoLand.com)- An El Paso man was sentenced on Tuesday to 41 months in prison for dealing firearms without a license.

According to court documents and testimony at trial, between December 2019 and August 2020, Jose Luis Garcia Jr., 34, purchased at least 49 firearms from Federal Firearm Licensees located in El Paso.  Agents observed that Garcia, who was living in Mexico at the time, would often cross into the U.S. for just a few hours to purchase firearms and then return to Mexico.  On August 8, 2020, Garcia was interviewed by federal agents and asked if he currently owned any of the 49 firearms he had purchased.  Garcia responded he did not own any firearms at the time.

On August 11, 2021, a federal jury found Garcia guilty of one count of dealing firearms without a license.

“As this case readily demonstrates, our office will aggressively prosecute federal firearms violations, particularly when firearms are being placed in the hands of prohibited persons or trafficked to Mexico,” said U.S. Attorney Ashley C. Hoff.

“Homeland Security Investigations (HSI) prioritizes the safety of our community as well as security along the Southwest Border. The trafficking of illegal firearms and ammunition in the United States oftentimes results in weapons falling into the hands of Transnational Criminal Organizations in Mexico. This illicit activity fuels not only crime but aids in sparking violence on both sides of the border,” said HSI Acting Special Agent in Charge Taekuk Cho, El Paso Division.

“Firearms trafficking is a top priority for the Bureau of Alcohol, Tobacco, Firearms and Explosives (ATF) and we will continue to leverage both human resources and crime gun intelligence to tackle the issue. We know that violence does not stop at the border and by leveraging the partnerships that law enforcement has we can continue to address the dangerous and illicit activity of firearms trafficking,” said ATF Special Agent in Charge Jeffrey C. Boshek II, Dallas Division.

HSI and ATF investigated the case. 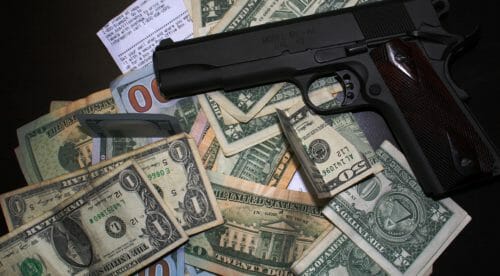