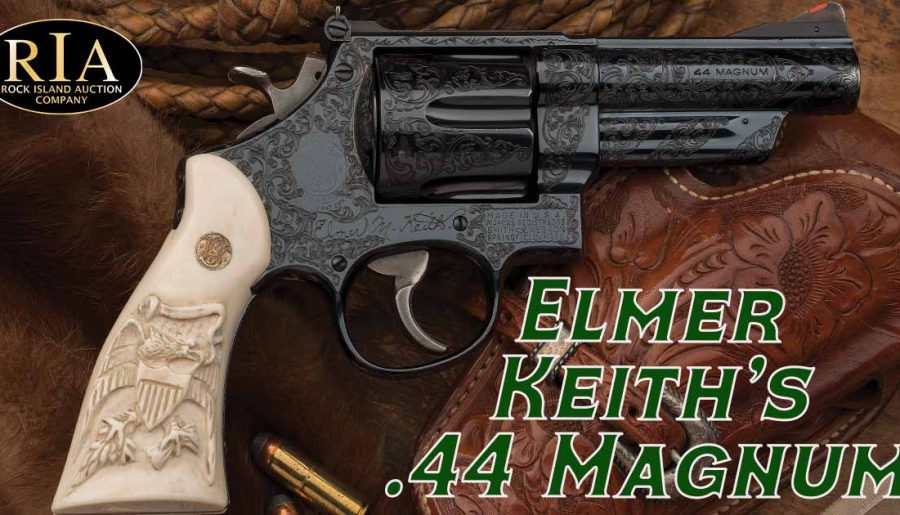 American legend Elmer Keith was long an advocate for more powerful ammunition for his .44 Special, and in the mid-1950s Remington Arms and Smith & Wesson rose to the task.

Ammo makers were wary of producing a hotter cartridge load because of the damage it could do to a gun built before modern heat-treating processes for strengthening metal were developed.

By the mid-1950s, Keith, a firearms writer, hunting guide, and outdoorsman, had successfully lobbied Smith & Wesson President Carl Hellstrom and Remington Arms executives to produce .44 Magnum ammunition and the revolver that could handle it. This would one day launch Dirty Harry Callahan’s famous line about punks and how lucky they may or may not be feeling.

Keith, “the father of big bore handgunning,” had already pushed for and gotten ammo makers to produce stronger ammunition for .38 specials  ̶ .357 Magnum  ̶ in the 1930s and would push again for .41 Magnum ammunition in the 1960s.

A Smith & Wesson first-year production Pre-Model 29 revolver presented by Hellstrom to Keith in appreciation for his advocating for the .44 Magnum will be on offer at Rock Island Auction Company’s May 13-15 Premier Auction. The gun has a 4-inch barrel, blue finish, and custom engraving and grips. 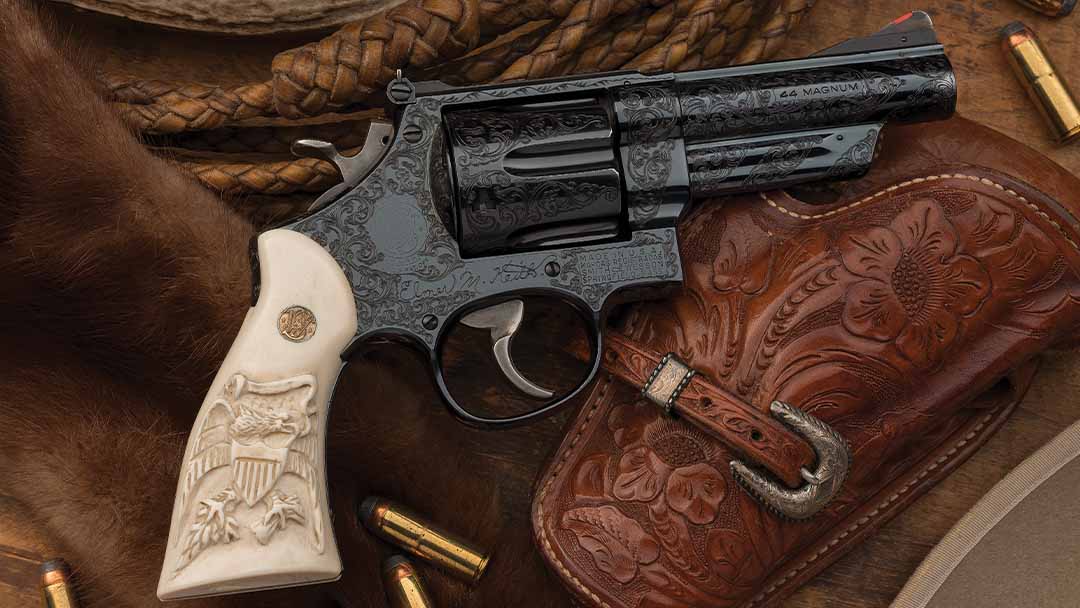 The .44 Magnum cartridge lengthened the .44 Special cartridge by 1/8th of an inch so the more powerful new load couldn’t be used in older revolvers. The fear was that older revolvers couldn’t handle the pressure from the higher pressure generated. Keith’s first “American Rifleman” magazine article was about blowing the cylinder and top strap off of a heavily loaded Colt Single Action Army.

“When the gun rose from recoil of the first cartridge I unconsciously hooked my thumb over the hammer spur and thus cocked gun as it recovered from recoil. When I turned the next one loose I was almost deafened by the report and saw a little flash of flame. My hand automatically cocked gun and snapped again but no report. I stopped then knowing something was wrong. The upper half of three chambers was gone. Also one cartridge and half of another case. Also the top strap over cylinder. My ears were ringing otherwise I was all O.K,” he wrote in the Aug. 15, 1925 “American Rifleman.”

The large N-frame revolver chambered in .44 Magnum went into production in 1955. It wasn’t designated the Model 29 until 1957. 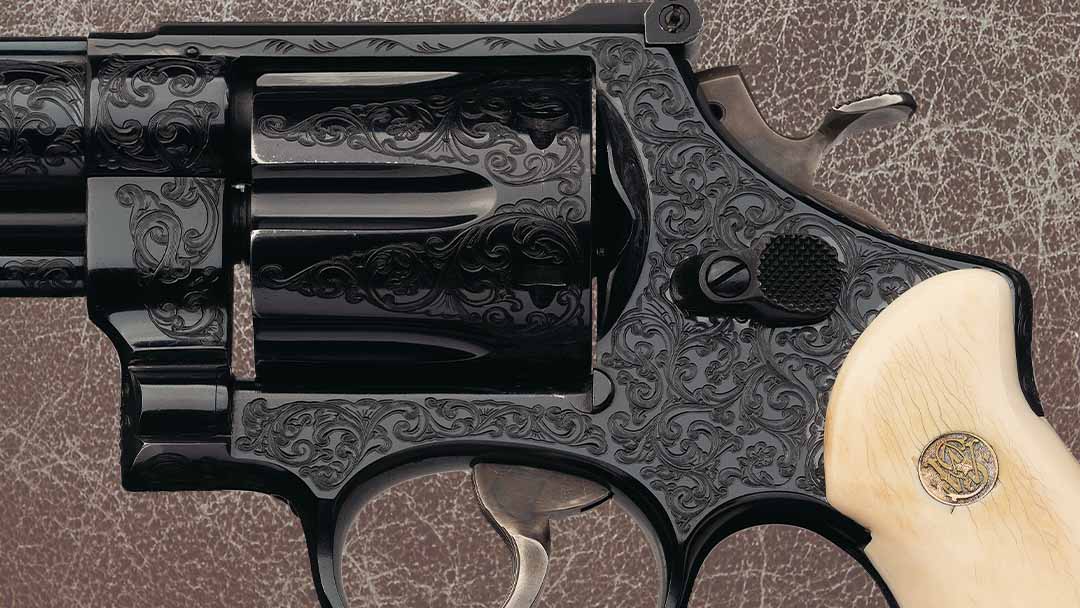 A closeup of the blued finish and fine engraving on the first year production Smith & Wesson Pre-Model 29 .44 Magnum revolver presented to Elmer Keith. The revolver is available in Rock Island Auction Company’s May 13-15 Premier Auction.

Keith’s favorite ammunition was .44 Special, but he regularly experimented with the cartridge loads. He would sell his hand-loaded .44 Special ammo via the U.S. Mail.

Colt and Smith & Wesson recommended .44 revolvers only use factory loads that would get about 12,000 psi of pressure though they could withstand more than 16,000 psi. Keith wasn’t alone in experimenting with hand loads, since other writings beyond his noted that Colts and Smith & Wessons could handle higher pressure but that care was required.

One of Keith’s hand loads resulted in 1,235 feet per second and 21,000 psi. He first used a faster burning powder before switching to one that burned slower but could create more velocity with less pressure.

He wasn’t the only .44 Special aficionado trying for a hotter cartridge load. In the 1940s, Keith was part of the .44 Associates, a group that shared reloading information and even printed a small distribution booklet listing more than 1,000 different .44 Special loads. 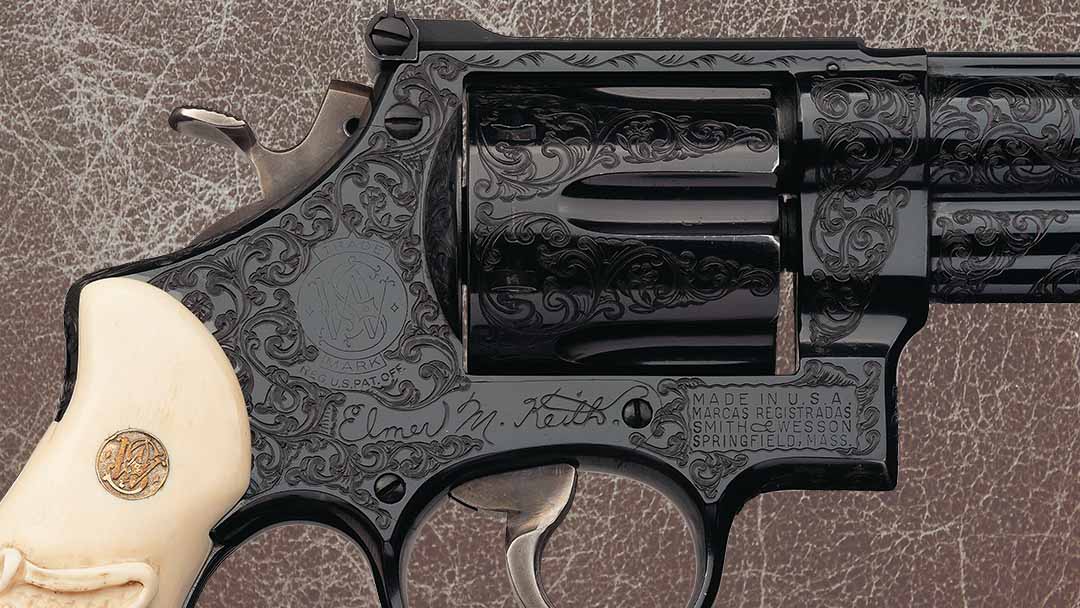 A closeup of the right side of the Smith & Wesson Pre-Model 29 .44 Magnum presented to Elmer Keith. Note Keith’s signature just below the cylinder.

Elmer Keith’s standard .44 Special load was 17.0 grains of #2400 powder with solid head brass and was the basis for his call to ammo makers to bring out a more powerful .44 Special load. The ammo companies were concerned about liability, so Keith petitioned for a new cartridge along the lines of the .357 Magnum and a new gun that could accept the new cartridge as well as the pressure generated by firing it.

In the end, he convinced representatives from Remington and Smith & Wesson to enter into a joint venture toward his cause. The respective companies proceeded to stretch a .44 Special cartridge to increase capacity and make an ultra-strong frame revolver.

Sample guns went out to industry writers in late 1955, and in January 1956, Remington’s .44 Magnum ammunition and Smith & Wesson’s new revolver made their debut, meeting with success, acclaim and brisk sales.

The gun’s reputation was so strong that by 1960, dealers couldn’t keep them in stock. They put customers on waiting lists or jacked up prices to as much as double the retail value. And that was before Dirty Harry. 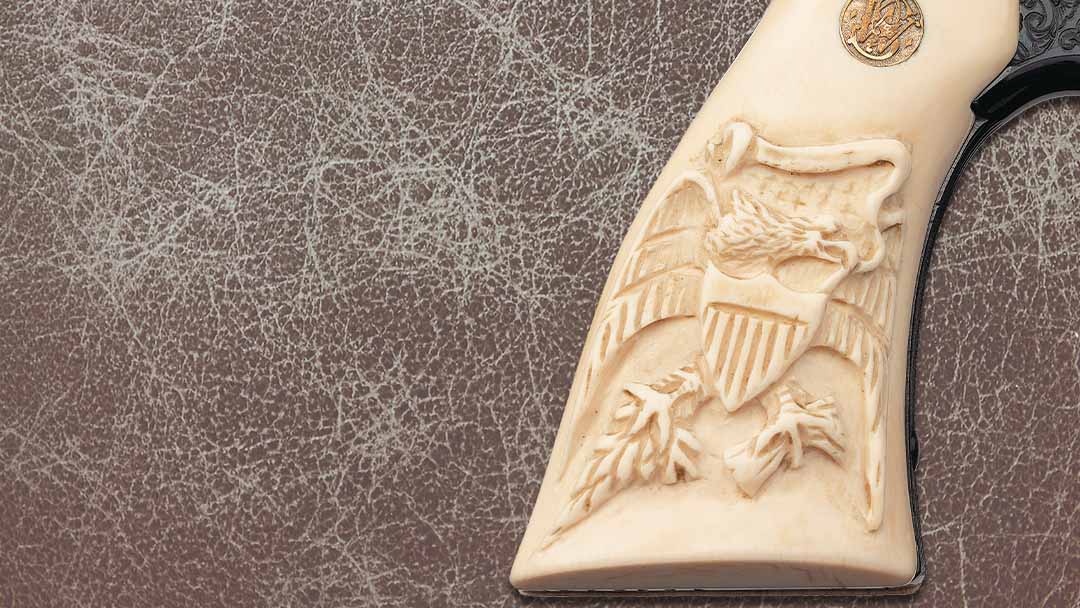 Ruger introduced its Blackhawk revolver chambered in .44 Magnum at about the same time as Smith & Wesson’s revolver. There are any number of apocryphal stories about how Ruger was ready to go with a gun that could take the brand new ammunition, we won’t speculate here on how that came to be. The new Ruger Blackhawk revolver was a bit less expensive than the Smith & Wesson and helped fuel demand for .44 Magnum.

By the early 1970s, Clint Eastwood had played anti-heroes in many of his movies, from the Man with No Name in Spaghetti westerns to Kelly’s Heroes. Then came Dirty Harry, the police detective who would do anything necessary to stop a psychotic killer. 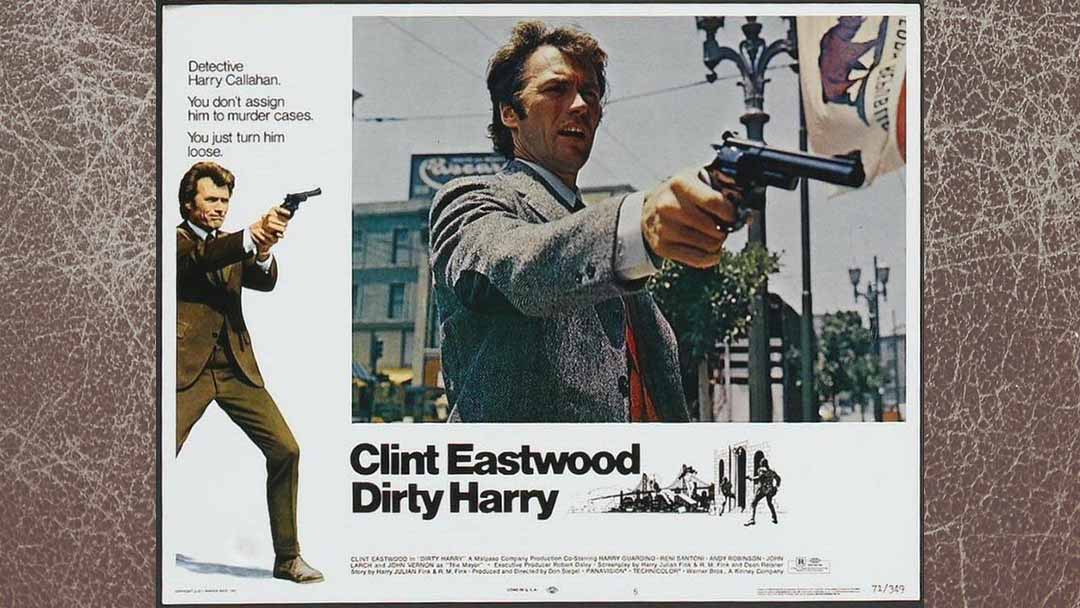 The full line snarled by Clint Eastwood that launched the Smith & Wesson into the stratosphere was, “I know what you’re thinking – `Did he fire six shots or only five?’ Well, to tell you the truth, in all this excitement, I’ve kinda lost track myself. But, being as this is a .44 Magnum, the most powerful handgun in the world and would blow your head clean off, you’ve got to ask yourself one question: `Do I feel lucky?’ Well, do you, punk?” 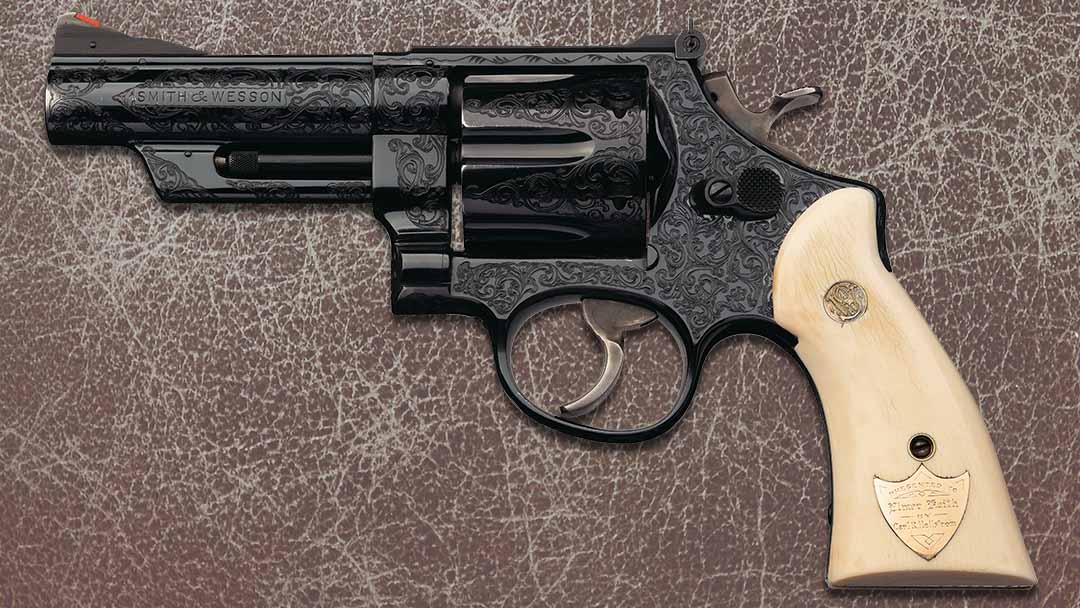 This blued and exceptionally fine Smith & Wesson Pre-Model 29 .44 Magnum revolver was presented to Elmer Keith by Smith & Wesson president Carl Hellstrom. It comes with a factory letter and floral tooled open top/open toe holster by the famous Bohlin Co. of Hollywood. The engraving was done by George Dallas.

Dirty Harry carried a 6 1/2-inch barrel, while Keith’s Smith & Wesson Pre-Model 29 has a 4-inch barrel. This revolver, available in Rock Island Auction Company’s May 13-15 Premier Auction is an exceptionally fine weapon with its blued finish and engraving with casehardened trigger and hammer. The presentation grips and George Dallas’ floral scroll engraving that covers nearly the entire gun were added later.

Elmer Keith was a rancher, cowboy, big game hunter, prolific writer, innovator of magnum cartridges, and all-around wheelgun legend. This remarkable Smith & Wesson revolver is an opportunity to grab a piece of that legend.

The Road to the .44 Magnum ̶ Improving the .44 Special, by John Taffin

The .44 Magnum: A History, by Wiley Clapp, shootingillustrated.com