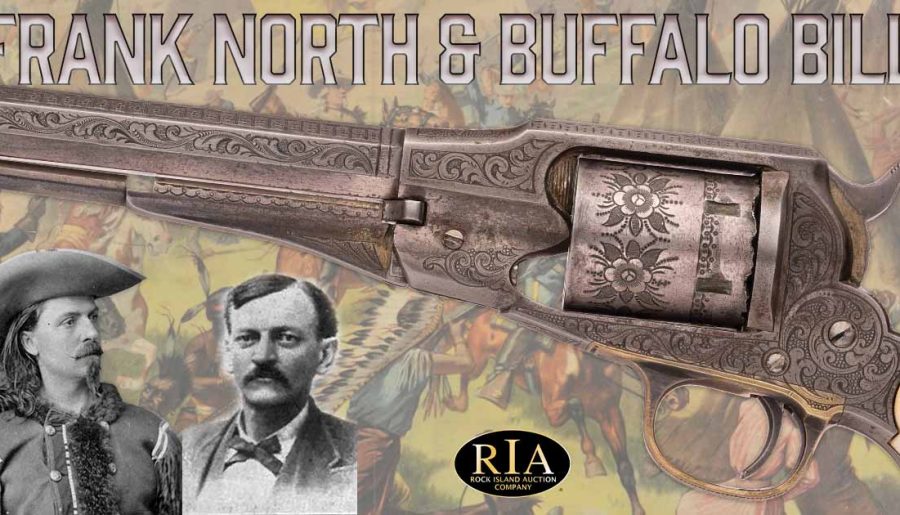 “If you want a man to fit that bill, he’s over there sleeping under the wagon,” North said, pointing to Buffalo Bill Cody. North surely didn’t have the flash of Cody in his buckskins, preferring plain western garb or a military uniform. The two met during the Indian Wars serving as scouts. 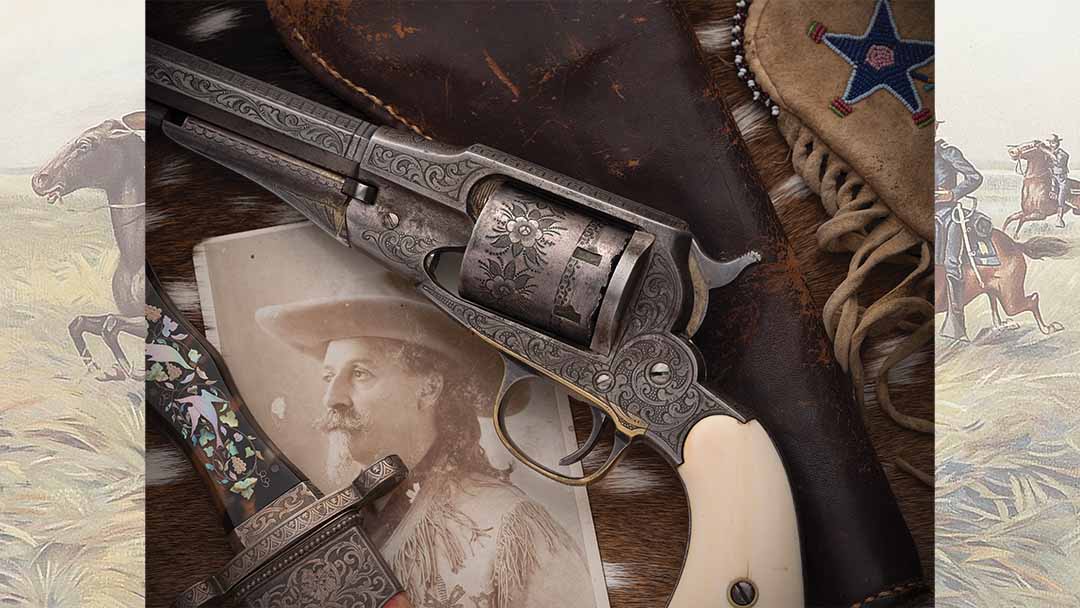 Born March 10, 1840 in New York City, North came to Nebraska when he was 16, working as a transporter, shipping goods between Omaha and Fort Kearny. He met the Pawnee Indians and learned their language, becoming a clerk and interpreter at the tribal agency near his home in Columbus, Neb.

The undermanned U.S. Army requested North form a company of Pawnee scouts in 1864, about five years before coming into Buffalo Bill’s orbit, to help guard construction of the Union Pacific’s leg of the transcontinental railroad and fend off Indian raids. He befriended Buffalo Bill as a fellow scout and briefly performed in the early years of the Wild West show. 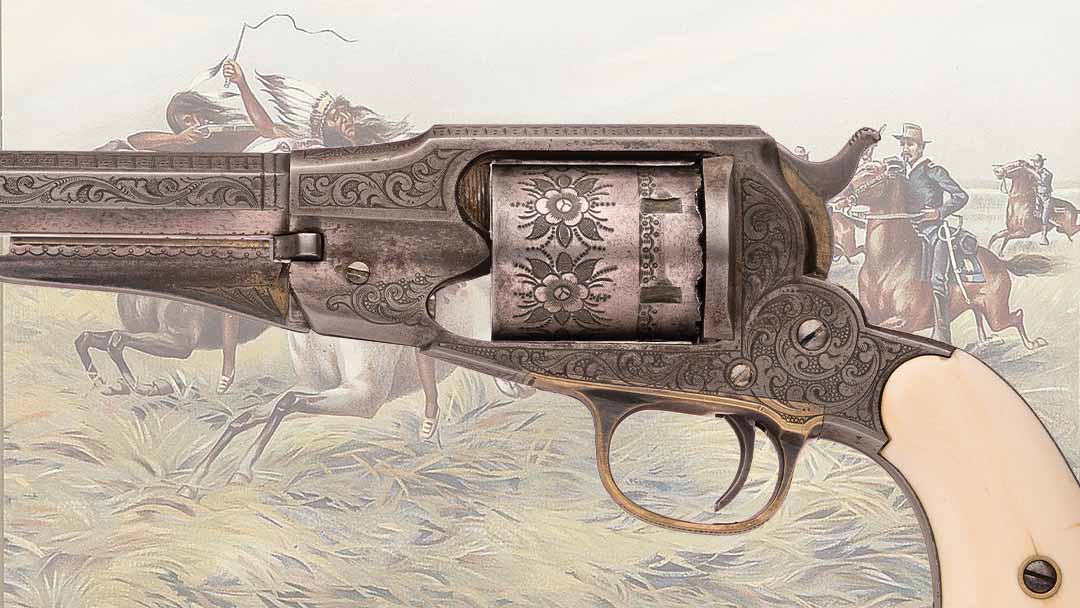 A closeup of the scrollwork engraving on this Remington “Improved New Model Navy” revolver presented to Major Frank North, commander of the Pawnee Scouts by Buffalo Bill Cody.

The Pawnee were initially day laborers as the Union Pacific pushed west. By 1866, the railroad was 247 miles west of Omaha, a year ahead of schedule and looking to celebrate their push westward. Union Pacific Vice President Thomas Durant wanted to mark the milestone of passing the 100th Meridian by bringing dignitaries including George Pullman, future president Rutherford B. Haynes, senators, and Congressman out west by rail, wining, dining, and entertaining them.

Part of the entertainment was provided by the Pawnee who did a war dance described by one observer as “wild and hideous yell, grotesque shapes and contortions.” The following morning the dignitaries were awakened to woops and war cries of Pawnee braves running through the tent city and a mock battle between the Pawnee and Sioux. Over time, the Pawnee continued to perform their exhibitions for other dignitaries, hunting parties, and construction workers. 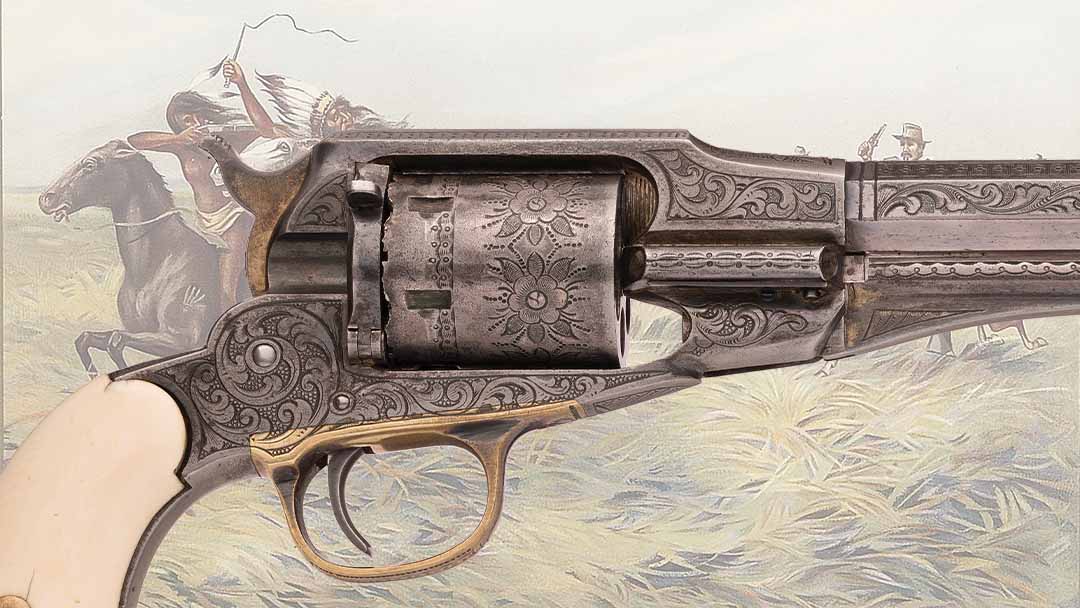 As the Civil War raged to the east, many homesteaders went to fight leaving their families and properties unprotected. The Sioux and Cheyenne tribes caught the settlers unprepared, killing hundreds, burning ranches and wagon trains, and running off livestock.

The Army soldiers were inexperienced in the asymmetrical fighting style of the Indians so North, a 24-year-old clerk, was recruited to lead Pawnee scouts that were enemies of the Sioux and Cheyenne.

The Pawnee were instrumental in putting down their Indian rivals, leading the Army to war parties and recovering stolen horses and mules.  By 1867, North’s Pawnee units were armed with Spencer repeaters and tasked with protecting a 300-mile length of road. The Sioux, finding the Pawnee well-armed and with good horses, rarely raided the railroads after a few initial skirmishes.

A Cheyenne chief learned the hard way about the Pawnee in an 1867 incident. The chief, Turkey Leg, and his band tore up a culvert and derailed a train, killed the train crew and robbed and burned the train. A unit of Pawnee scouts chased the Cheyenne, killing 15 warriors and capturing Turkey Leg’s nephew, forcing him to surrender at North Platte.

Two years later, a renegade band of Cheyenne dog soldiers led by Chief Tall Bull marauded across Kansas and Nebraska. The Pawnee scouts tracked the Sioux for more than a month to northeast Colorado in July, 1869. Known as the Republican River expedition, the Pawnee and Army caught up to the Sioux and wiped them out at the Battle of Summit Springs.

The Pawnee were mustered out of Army service in 1871. 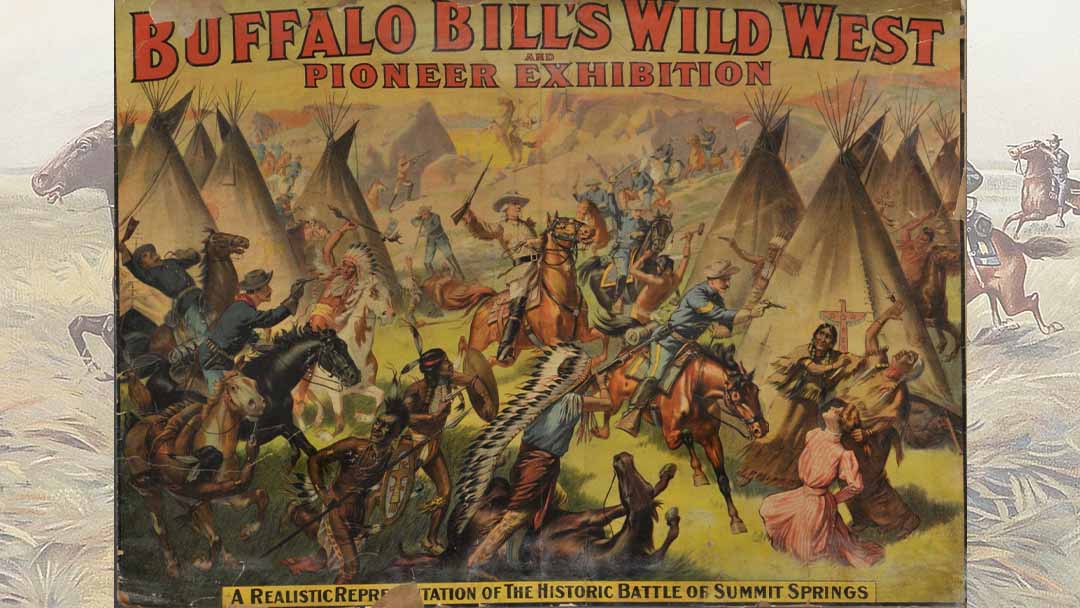 Buffalo Bill’s Wild West Show reenacted the Battle of Summit Springs as part of its entertainment. Major Frank North, commander of the Pawnee Scouts, was a friend and one-time business partner of Buffalo Bill Cody and performed for a short time with the Wild West show. The image is courtesy of the Harry Ransom Center at the University of Texas at Austin.

In 1876, following the Battle of Little Big Horn there was concern that Nebraska Sioux would join with Sitting Bull and Crazy Horse. North was called upon again to muster a 100-man unit of Pawnee braves. Traveling to Indian Territory he was able to quickly find 100 recruits among the impoverished Native Americans. Many who weren’t selected by North followed the group for 80 miles wanting to be included.

The Pawnee had a prompt impact, forcing a group of Sioux near Chadron, Neb., to surrender and sit out the rest of the war. Ordered to push a winter campaign, the Pawnee guided the Army to a well-hidden Cheyenne camp in the Big Horn Mountains. The Army routed the Cheyenne, took their horses, and burned their lodges and provision. The Cheyenne were turned away by Crazy Horse and forced to go to Fort Robinson in northwest Nebraska.

Guided by the Pawnee through the winter, the Army had the Sioux on the run all throughout the winter, leaving them unable to hunt. By spring, the Sioux surrendered and the Pawnee were again mustered out in May, 1877. 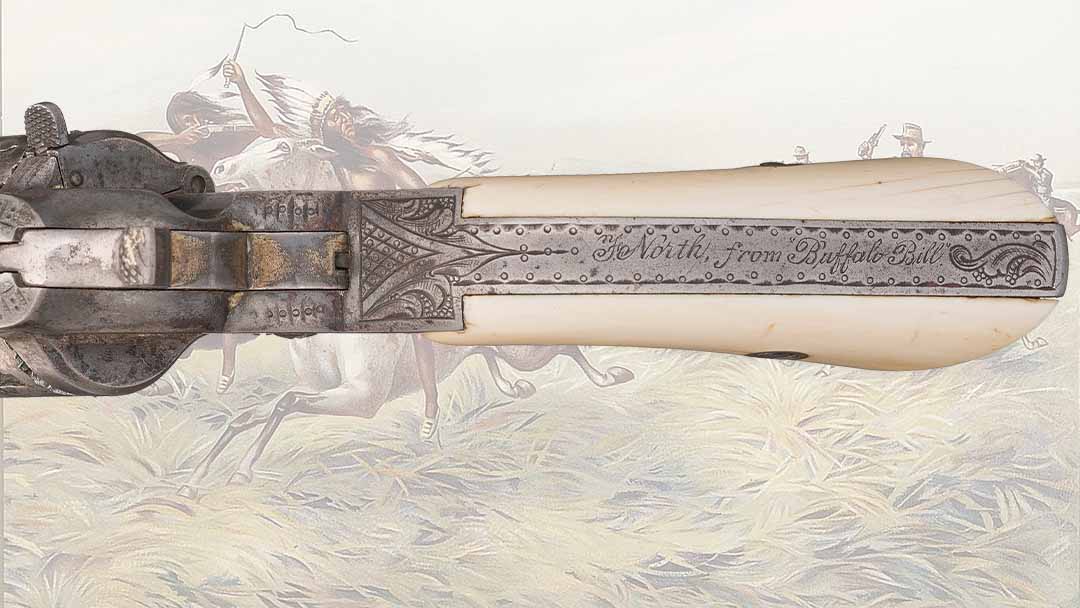 At some point in their friendship, North likely shared with Cody the story of the 1866 exhibition by the Pawnee for the railroad dignitaries. Also, in 1868, Cody watched an exhibition put on by the Pawnee and an Army Cavalry unit and was impressed.

Over the years, Cody performed in smaller productions where he told stories, like “The Scouts of the Prairie,” in 1872. He thought bigger and better, recalling the cowboy competitions of roping, shooting, riding, and bronco busting he saw when he and North owned a ranch together before they sold it in the early 1880s.

When Buffalo Bill finally had a show in mind, North helped. He recruited 36 Pawnee to participate along with Gordon Lillie to be a translator. Lillie, later known as Pawnee Bill, would one day partner with Buffalo Bill on a Wild West show.

By 1883, the troupe was nearly ready. In May, Buffalo Bill called on Major Frank North in Columbus, Neb. He was joined by 72 others in the company of the American legend’s fledgling Wild West show for rehearsals. 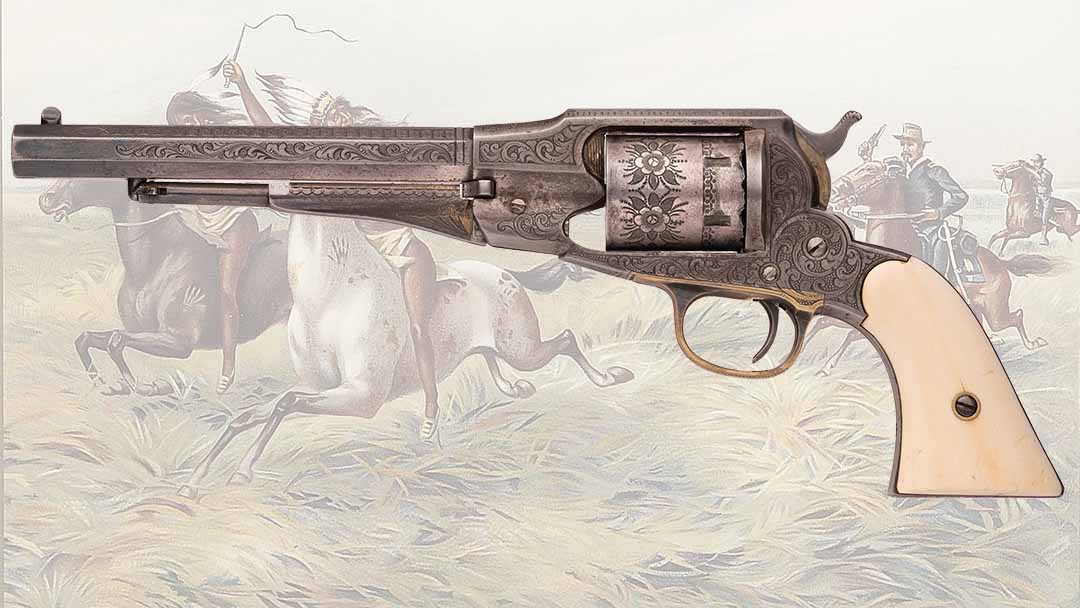 The entourage set up camp at the Columbus fairgrounds to practice the original show that would become the “The Wild West — Hon. W.F. Cody and Dr. W.F. Carver’s Rocky Mountain and Prairie Exhibition.” The first show would be in Omaha on May 19, 1883, starting three decades of wild and wooly Wild West excitement.

North would join the show, showing off his riding and shooting talents. In July, 1884 North was riding in a show at Hartford, Conn., when he was thrown by his horse. A Pawnee riding behind him tried to avoid North but didn’t have time to avoid him and his horse stomped North, breaking ribs and causing internal injuries.

He was able to recover and went back to work for the show, not as a performer but helping out behind the scenes. In March, 1885, North grew ill in St. Louis and returned to his home in Columbus. He died on March 14, shortly after turning 45. 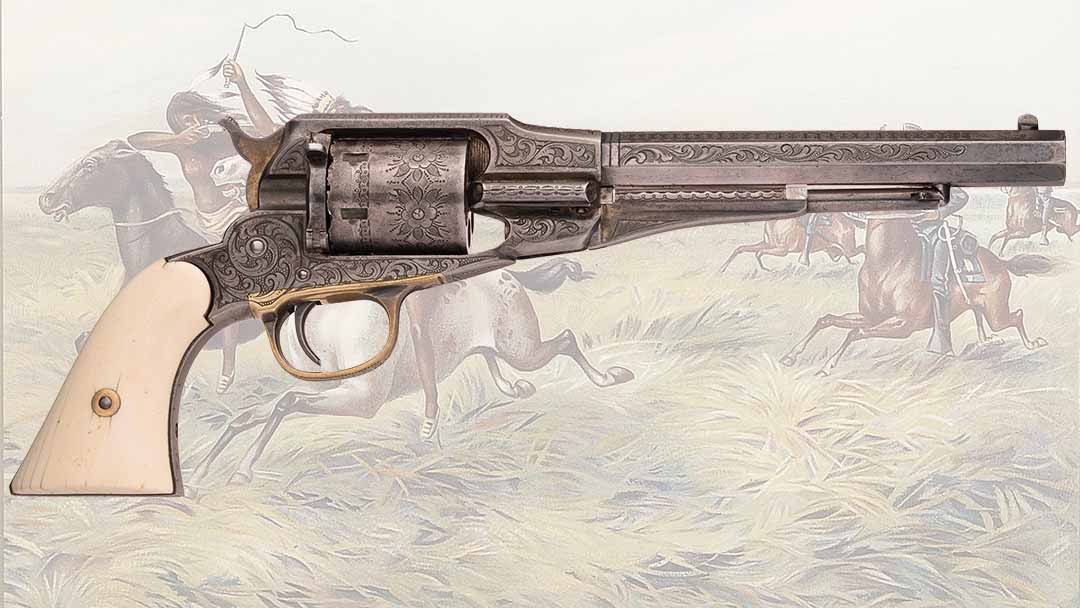 This stunning Remington Improved New Model Navy inscribed “F. North, from Buffalo Bill” on the back strap is similar to the Remington New Model Army percussion revolver Cody wore during the Indian Wars and the Battle of Summit Springs. The gun presented to north was made as a cartridge revolver and then converted, and dates to 1870-1875.

The gun’s provenance from North’s family indicates that the revolver was presented to North in the 1870s or 1880s when Cody and North were friends and business associates and would be a flashy sidearm for a Wild West showman. The engraving features extensive scroll, floral, geometric, and dot and line patterns. Distinctive floral blooms adorn the cylinder and the top of the frame at the breech.

Frank North’s revolver from Buffalo Bill is a historical piece at the intersection of the Indian Wars, western settlement, and Wild West entertainment. The gun come from a man whose bravery helped make the west safe for settlers and was there at the launch of the show that traveled the world introducing the American Wild West to the World. This amazing piece of Americana will be on offer in Rock Island Auction Company’s Aug. 26-28 Premier Auction.

Buffalo Bill Gets on Track, by Mark Boardman, True West

History and Stories of Nebraska, by Addison Irwin Sheldon 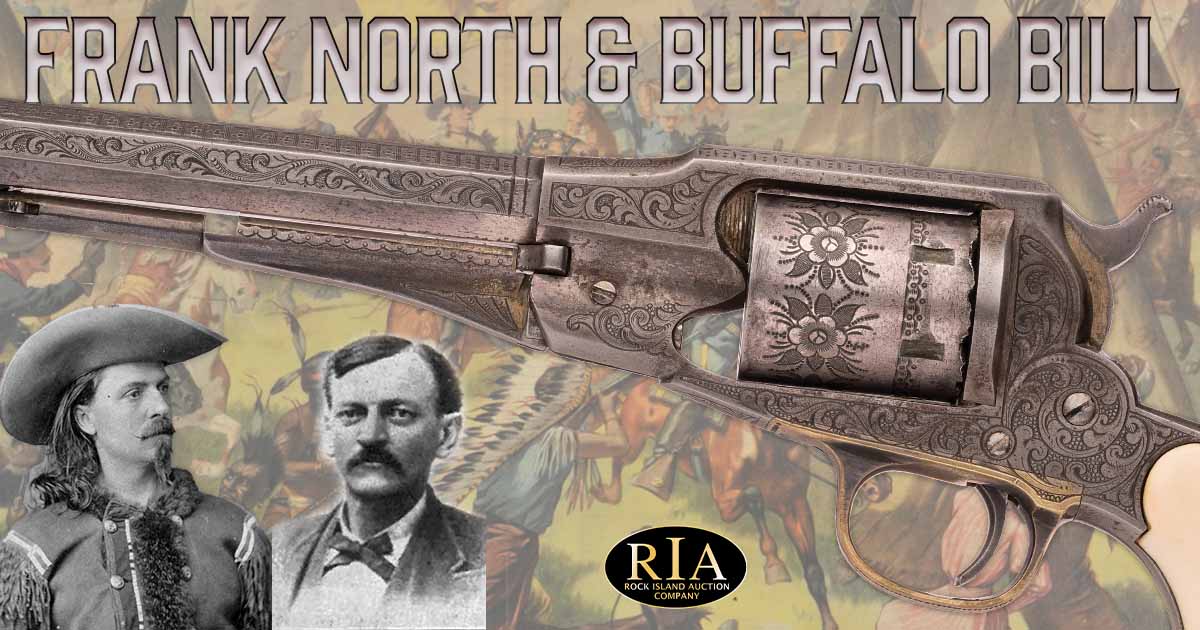