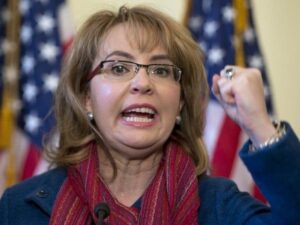 Gabrielle Giffords huddled with Vice President Joe Biden in his private office just off the Senate floor on an April Wednesday in 2013, watching the stunning defeat of a bill to expand background checks to most gun sales. Giffords — a former Democratic lawmaker who still had difficulty speaking after being shot in the head in 2011 during an event in her Arizona district — was equal parts furious and devastated as she watched 46 of her former colleagues, including five Democratic senators, vote against the gun-control measure informally known as Manchin-Toomey.

The gun bill had emerged in the wake of the mass shooting at Sandy Hook Elementary School in Newtown, Conn., just four months prior — a massacre that left 20 children and six adults dead. Now it was clear that not even 20 slaughtered first-graders would move the nation to change its gun laws….

To many gun-control advocates, the compromise [Sen. Joe] Manchin and [Sen. Pat] Toomey came up with was modest to the point of being toothless. It would have expanded background checks to most gun sales, but it also loosened some existing gun restrictions — what one senior Republican staffer on Capitol Hill at the time described as “Second Amendment sweeteners” — in an effort to mollify the NRA and prevent it from actively lobbying against the bill.

But after other pro-gun groups, such as Gun Owners of America, came out against the measure, so, too, did the NRA….

In the end the measure was defeated, 54 to 46, in April 2013 with only four Republicans — Toomey included — ultimately supporting the bill.