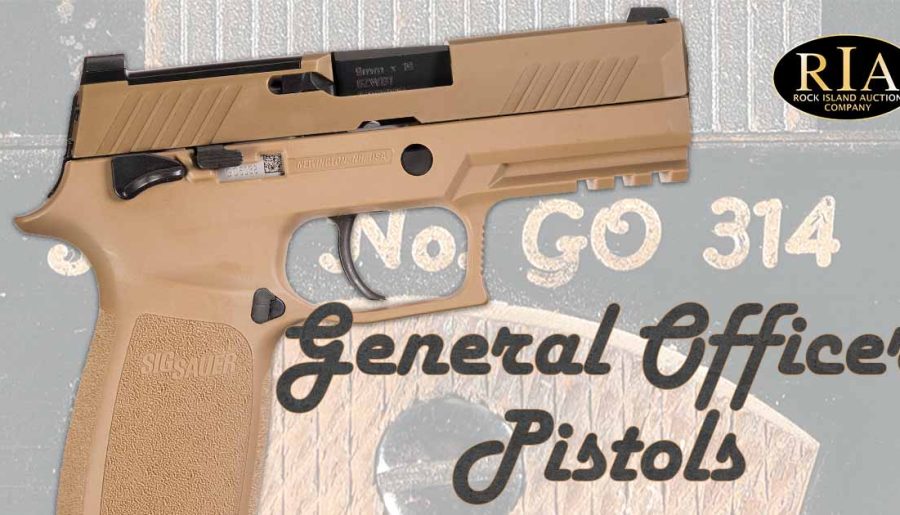 The Revolutionary War. The War of 1812. The Mexican American War. The Civil War.  The Indian Wars. The Spanish-American War. World War I.

During all those conflicts and every smaller one in between, generals had to provide their own sidearms and long guns. It wasn’t until the midst of World War II, that the United States military supplied generals with firearms.

Before that, some generals purchased their weapons while others borrowed standard government issued weapons and returned them when they were done fighting. Generals like George S. Patton wanted to project the sense that they’re “fighting generals,” and would carry a sidearm. Patton famously carried a Colt Single Action Army with ivory grips but also reported to have an issued Colt M1903. 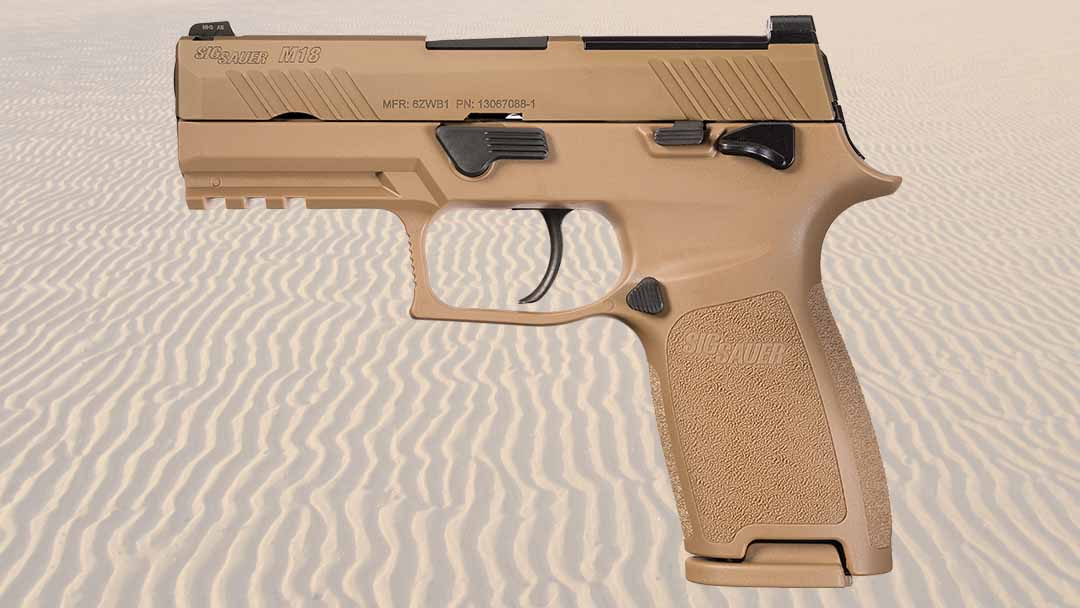 The Sig Sauer M18 was adapted as an American military gun in 2017, so it is exceedingly rare to have a General Officer pistol of this make become available. It is Lot 347 in Rock Island Auction Company’s Aug. 26-28 Premier Auction.

The general’s “code of dress” changed during World War II so that sidearms were issued to generals because they no longer stayed in one place on the battlefield and as battle lines could be fluid, a general had to be armed to protect themselves if they ran into trouble. General officer issued firearms began in 1944 as the U.S. Army pushed across Europe, but didn’t officially enter into Army regulations until 1956. Generals are required to annually file a statement that they still have the issued sidearm, and can purchase the gun when they left the service.

The U.S. Navy doesn’t have a similar program but the Air Force does.

Rock Island Auction Company has three General Officer’s Pistol Program pistols in the Aug. 26-28 Premier Auction that are a progression of the sidearms issued to those who achieved the rank of brigadier general during different eras: a Colt M15 pistol, an Beretta M9, and the latest General Officer pistol, the Sig Sauer M18, the military variation of Sig’s P320.

Eisenhower, who was the Allied Supreme Commander in Europe during World War II, didn’t wear a firearm.  He graduated from West Point in 1915 but in his long military career never saw combat. Nevertheless, he purchased the Colt M1908 Hammerless pistol he was issued. Gen. Douglas MacArthur was another general who didn’t wear a firearm and was proud that he went unarmed in World War I.

Gen. Scott Miller, the final commander of Operation Resolute Support in Afghanistan, was at times seen wearing an M1911 as a sidearm, a gun that was popular with special forces, but also seen carrying a Glock. In an incident in October, 2018, Miller was present when a Taliban gunman killed an Afghan police chief. Miller drew his sidearm in self-defense, a rarity for generals in the U.S. military but an acknowledgement that the enemy could be anywhere. 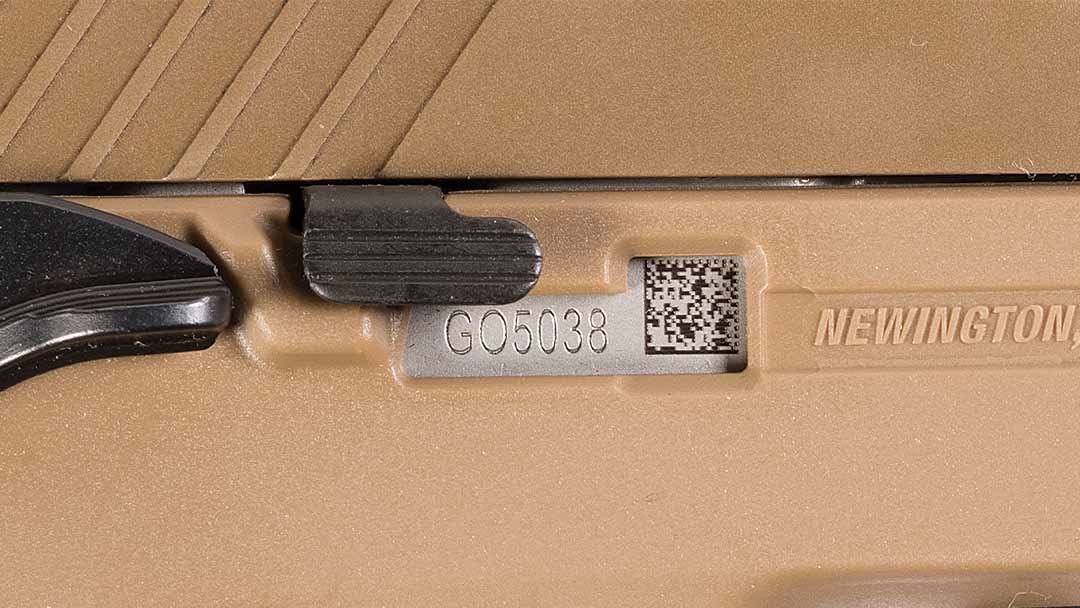 A closeup of a Sig Sauer M18 shows the “G.O.” prefix to the serial number that identifies it as a General Officer pistol. It is Lot 347 in RIAC’s Aug. 26-28 Premier Auction.

Though no official date has been found, Colt and Rock Island Arsenal records show that issuing sidearms to general officers began in 1944. That year, the Colt factory made shipments to 104 general officers.

Quotes from generals in the book “The Colt U.S. General Officers Pistol,” by Harold Greeley IV, don’t mention firing it in combat, and that they often considered it a “social weapon,” instead preferring to rely on their purchased Colt M1911s.

“I gave the Colt Automatic Pistol Caliber 380 to a young Lt. Colonel in my command. I did not consider the Colt 380 I was issued a good pistol compared to the commercial Colt 45 which I carried,” wrote one general. 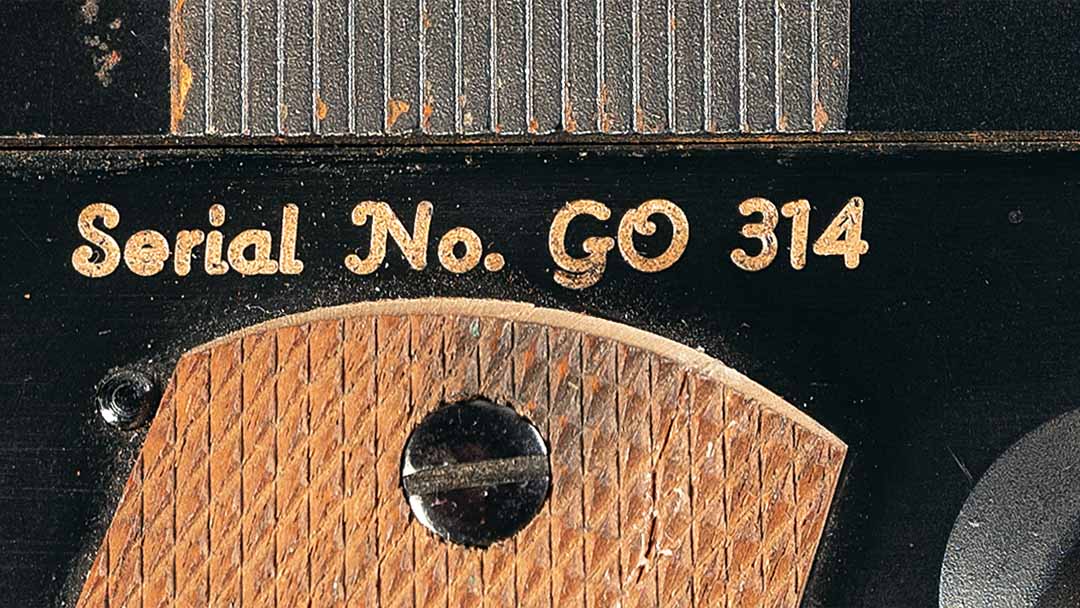 A closeup of this M15 shows the G.O. prefix to the serial number identifying it as a General Officer pistol. The M15 was the first pistol issued to general officers with the G.O. prefix. 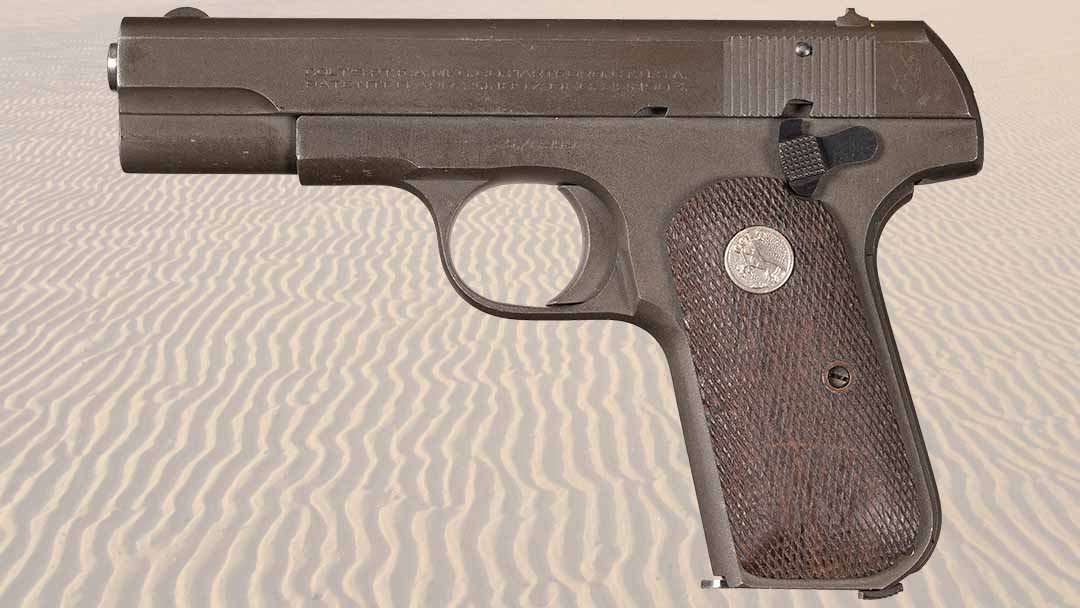 This Colt Model 1903 Pocket Hammerless was a General Officer pistol issued to Brigadier General Chauncey D. Merrill. It sold in RIAC’s May Premier Auction for $5,288.

The Colt M15 became the next General Officer pistol, though Smith & Wesson Model 39, Colt Model 1969, and Walther Model P38 were also considered. The M15 was a Colt M1911-A1 pistol modified at Rock Island Arsenal, located just a few short miles away from Rock Island Auction Company. Greeley, in his book, gives a lot of responsibility for the M15’s design to Dale Hoffman, the superintendent of Small Arms, Machinery and Plating, who recognized that the existing inventory of general officer sidearms was diminishing and a new gun was needed.

The M1911-A1’s barrel was shortened by about 3/4 of an inch and had one locking nut removed. A full-length recoil spring guide was used and sights were enlarged. They were given walnut grips with a brass plate bearing the officer’s name. “General Officer’s Model” is engraved on the left side of the slide with “RIA,” for Rock Island Arsenal, engraved on the right side of the slide. About 1,000 were made.

The tradition of General Officer pistols bearing serial numbers with the prefix “G.O.” standing for general officer, started with the M15. The engraving on the slide was filled with either white or white mixed with gold paint. The total issue from 1972 to 1982 was 1,004. 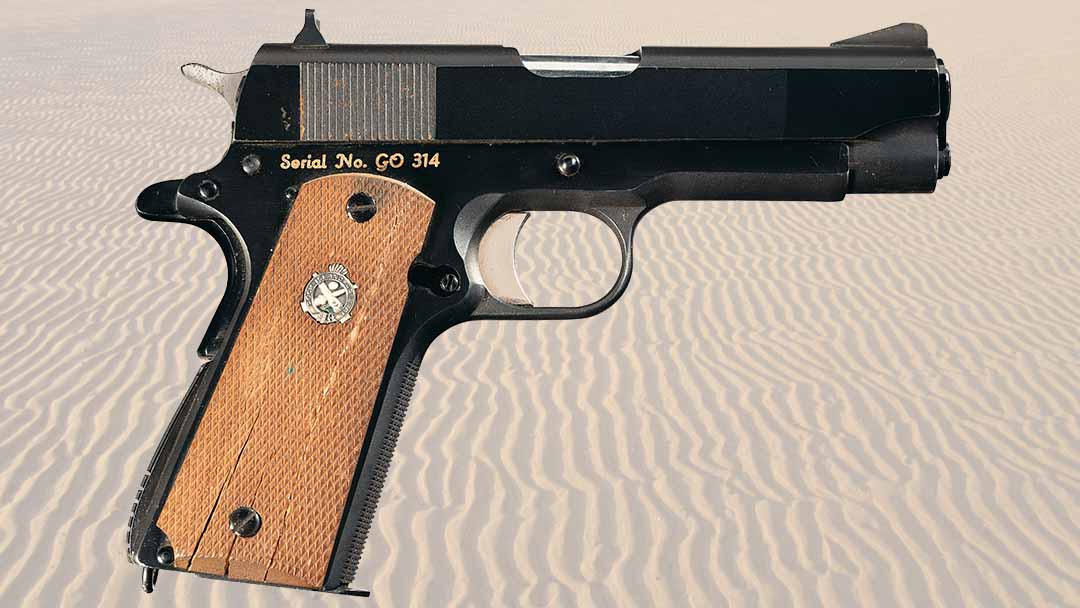 The M15 General Officer pistol was a Colt M1911-A1 modified with a shortened barrel at Rock Island Arsenal. The M15 is the first firearm in the series issued to general officers that bears the serial number prefix “G.O.” This M15 issued to Major General John Coffey Jr., Adjutant General of the Oklahoma Military Department.

The M1911-A1 was only issued as a General Officer pistol for a short period of time after no funding was appropriated to continue making the M15.  About 410 pistols were issued from 1982 to 1986, and about half of them were returned to Rock Island Arsenal when the newer Beretta was issued.

The U.S. military switched its sidearm to the Beretta M9 (commercially the 92FS) in 1985 to conform with NATO standardized ammunition, and it also became the general officer pistol. It had no distinguishing characteristics as a General Officer pistol beyond the G.O. serial number. Berettas issued to Air Force general officers don’t appear to carry G.O. serial numbers. 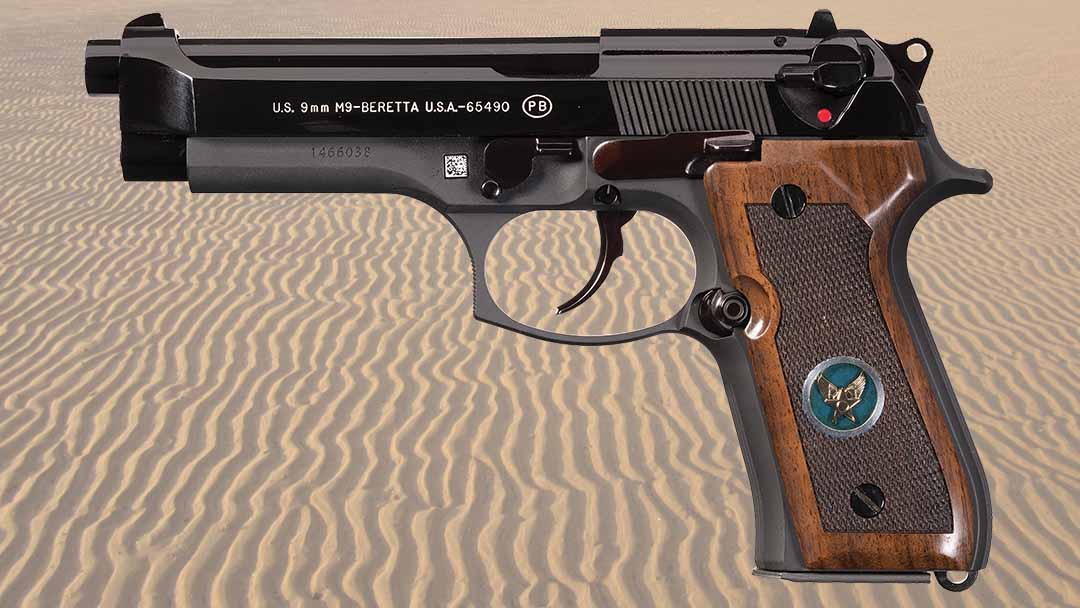 Beretta M9 became the adopted U.S. military sidearm in 1985 and was also the General Officer pistol issued. It had no distinguishing characteristics other than the G.O. prefix to the serial number. However, the USAF didn’t use the G.O. prefix when issuing the M9 to general officers.

When it came time to retire the M9, the Sig Sauer M17 and M18 were selected as the new sidearm for the military in 2017, besting seven competitors. The M17 is the full-sized model, while the M18 serves as the shorter carry model and is issued as the General Officers pistol.

Since the M18 has only recently been issued to newly promoted generals, their arrival on the collectors market now is fairly rare. The M18 is also marked with the G.O. serial number for general officers and also provided with large and small grips and arrives in the medium grip. 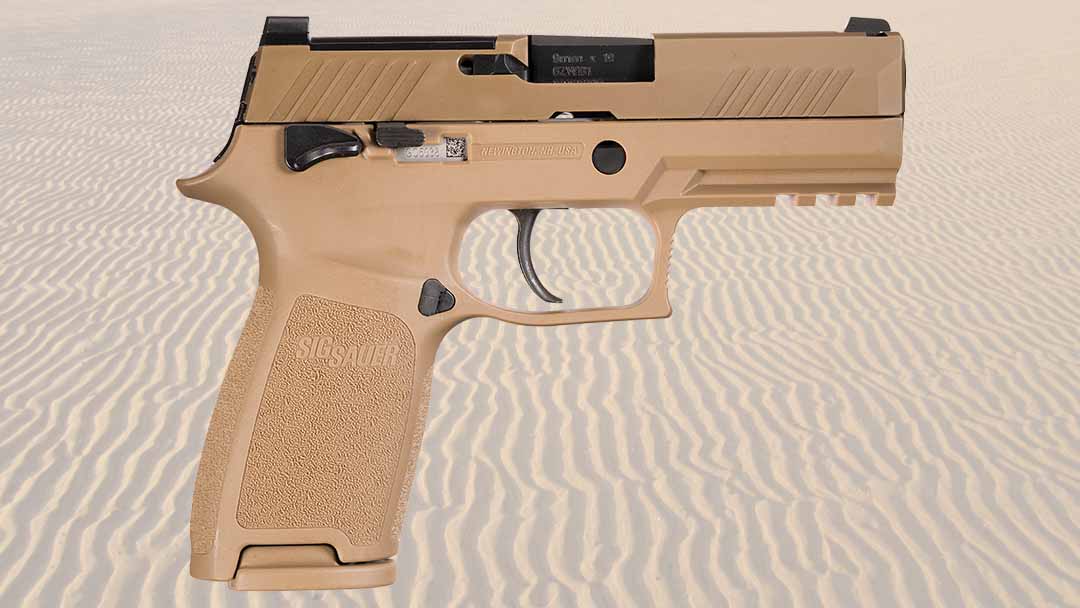 The Sig Sauer M18 is the latest General Officer pistol issued by the U.S. military. It was only adopted in 2017, so Lot 347 in RIAC’s Aug. 26-28 Premier Auction is exceedingly rare.

The trio of General Officer pistols offered in Rock Island Auction Company’s Aug. 26-28 Premier Auction span the Vietnam War to the Iraq and Afghanistan conflicts and beyond as the military continues to modernize its weaponry. These handguns are legacy pieces, each issued to a general officer who achieved the rank of brigadier general or higher, and should be a must-have for military collectors, especially the recently issued Sig Sauer M18.

Army Generals Are Getting Their Very Own Variant of the Services’ New Handgun, by Jared Keller, Task & Purpose 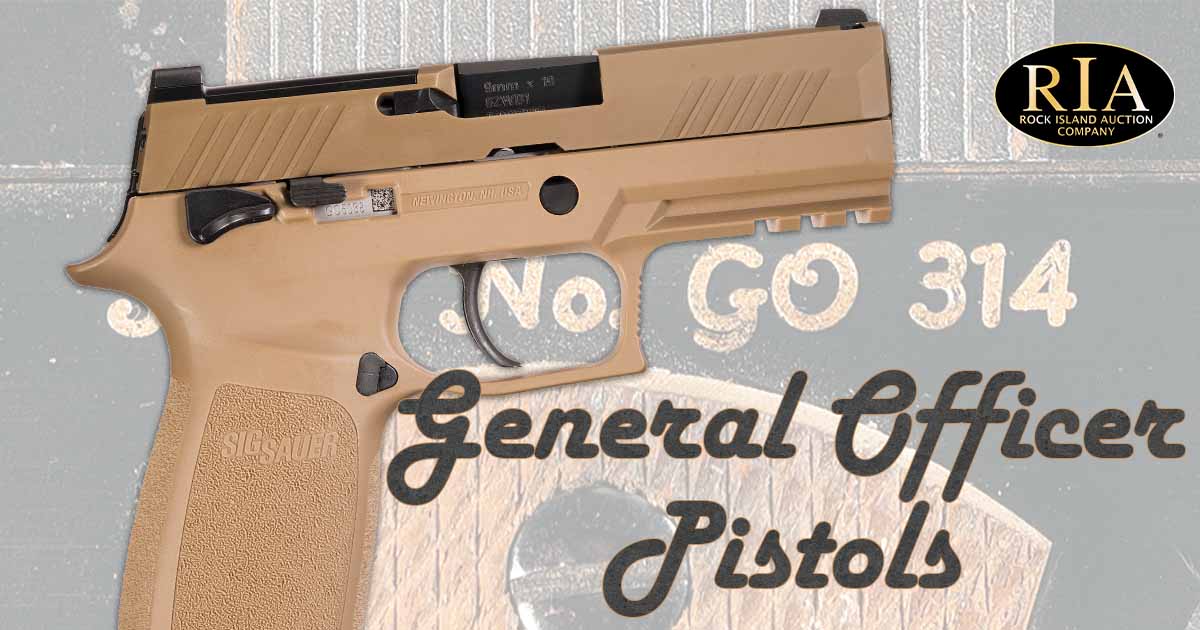