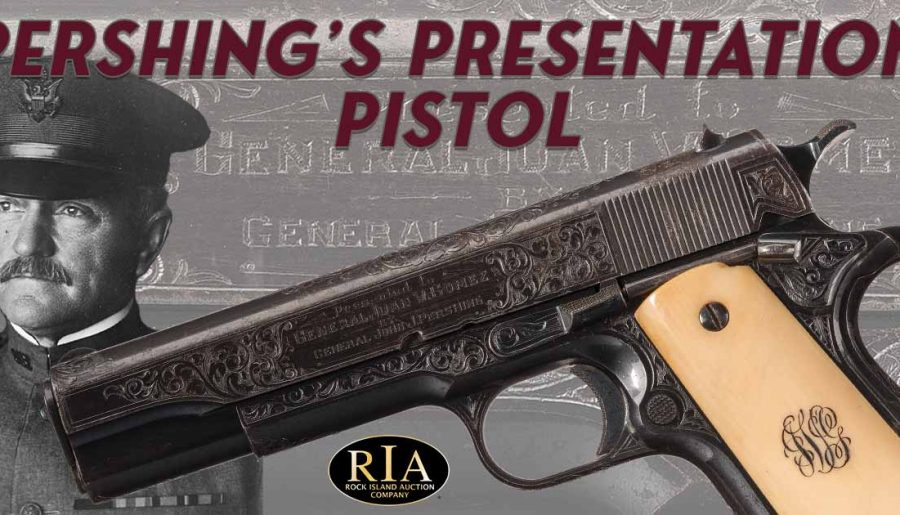 General John J. Pershing was a West Point graduate, a soldier’s soldier. He wasn’t afraid to get his hands dirty and find ways to succeed, whether it was chasing renegade Apache across the southwestern desert, storming hills in the Spanish-American War alongside the Rough Riders, putting down Philippine rebellions, chasing Poncho Villa across the wastes of northern Mexico, or his biggest challenge — building out the U.S. Army to fight in World War I.

Along the way, he was handed the nickname “Black Jack,” but not for being a blunt, hard-hitting soldier. The nickname came derisively from West Point cadets who hated their instructor who had been a commander in the African American 10th Cavalry regiment in the Indian Wars.

Congress named Pershing General of the Armies of the United States after World War I and he was Army Chief of Staff from 1921 to 1924 when he retired at the age of 64.

Shortly after his retirement, in 1925, the soldier-diplomat traveled to South America on assignment by the U.S. government to try to broker a solution to a decades-old border issue between Chile and Peru. It was on this trip that Pershing presented a Colt Government Model pistol to Venezuelan President General Juan Vicente Gomez. The historic pistol, inscribed to the president, with scrimshaw grips bearing Gomez’s initials, is available in Rock Island Auction Company’s Dec. 9-11 Premier Auction. 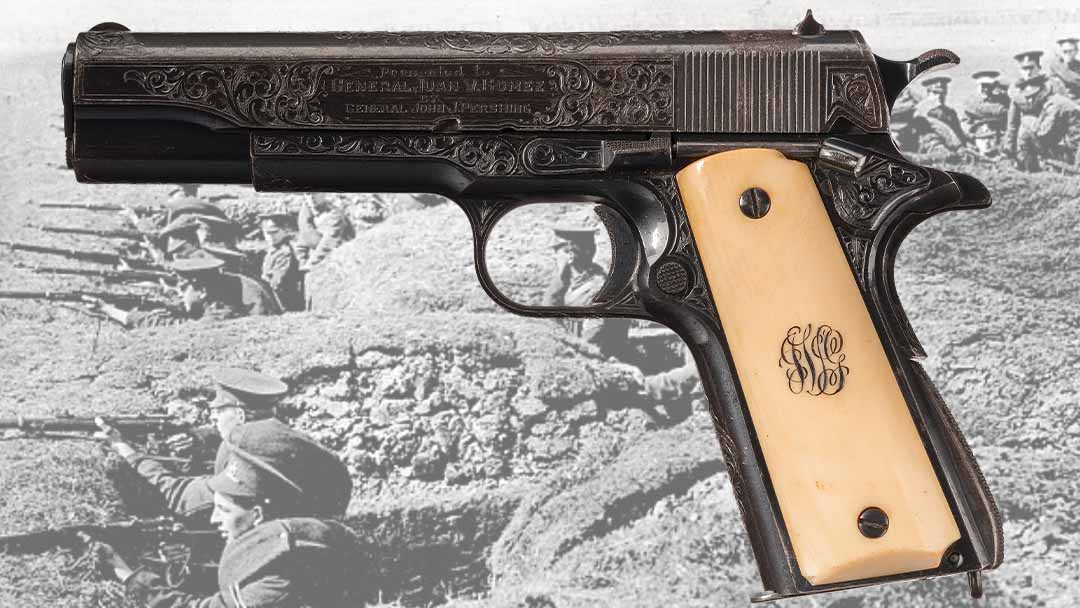 Following a stint teaching at the University of Nebraska where he earned a law degree at the same time, Pershing received the assignment to lead the 10th Cavalry in Montana. The all-African American unit was already legendary in the southwest and had just received the northern post when Pershing arrived in the fall of 1895.

Pershing’s unit was tasked with and succeeded in running down a fugitive band of Cree to be returned to Canada. Troop H of the 10th Cavalry spent 62 days and 600 miles in the saddle in pursuit. Pershing’s men returned the Crees to Canada without a fight.

Pershing wrote later of being a commander of the 10th Cavalry: “several years of my early military life were spent with that organization, and as I look back I can but feel that the associations with the splendid officers and men of the 10th Cavalry were of the greatest value to me.”

A short time later he was transferred to a post in Washington D.C. before his assignment at West Point where he commanded Company A of the cadet corps. As commander he was known as stern and exacting, at one point confining his cadets to the barracks for 30 days for one infraction.

“In retaliation his charges hung the sobriquet of “N****r Jack” on him; after all, he had served with a Negro regiment without any audible professions of distaste,” wrote Richard O’Connor in a February 1967 issue of American Heritage magazine article about Pershing’s service with the 10th Cavalry.

As the Spanish-American War broke out, Pershing lobbied all he knew in the War Department hierarchy to get back to the 10th Cavalry as it was going to fight in Cuba. In the battle of San Juan Hill, the 10th Cavalry, alongside the Rough Riders, charged the ramparts and stormed the hill, planting the unit’s flag at the crest. The 10th lost half its officers and one fifth of its enlisted men in the fight. 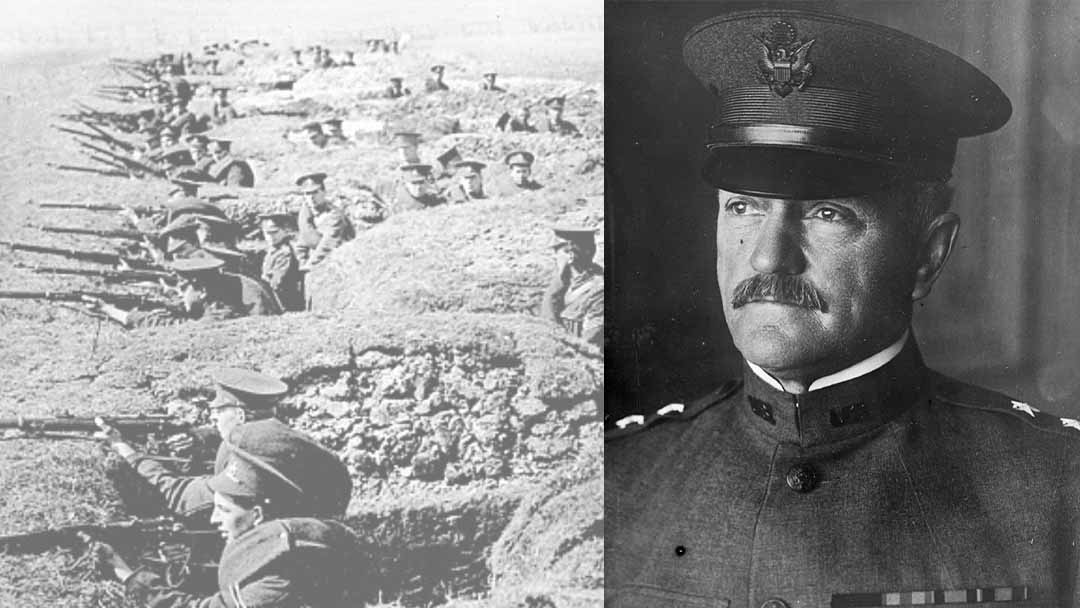 Pershing recalled a particular moment during the charge, writing later, “I saw a colored trooper stop at a trench filled with Spanish dead and wounded and gently raise the head of a wounded Spanish lieutenant, and give him the last drop of water from his own canteen. We officers of the 10th Cavalry could have taken our black heroes in our arms.”

The 10th’s officers sought decorations and promotions for its enlisted men as the Spanish-American War ended. More than 60 non-commissioned officers of the 10th Cavalry were commissioned as the Army expanded in World War I, with 20 earning the rank of captain.

Pershing would command the 10th Cavalry twice more, when he took command in the Philippines in 1906, and again 10 years later as the U.S. Army chased Poncho Villa across Chihuahua in northern Mexico.

The 10th Cavalry didn’t go to France, but Pershing as commander of the American Expeditionary Forces still recognized the African-American soldiers who were serving and would stop to address them and tell them of his service with the legendary Buffalo Soldiers. 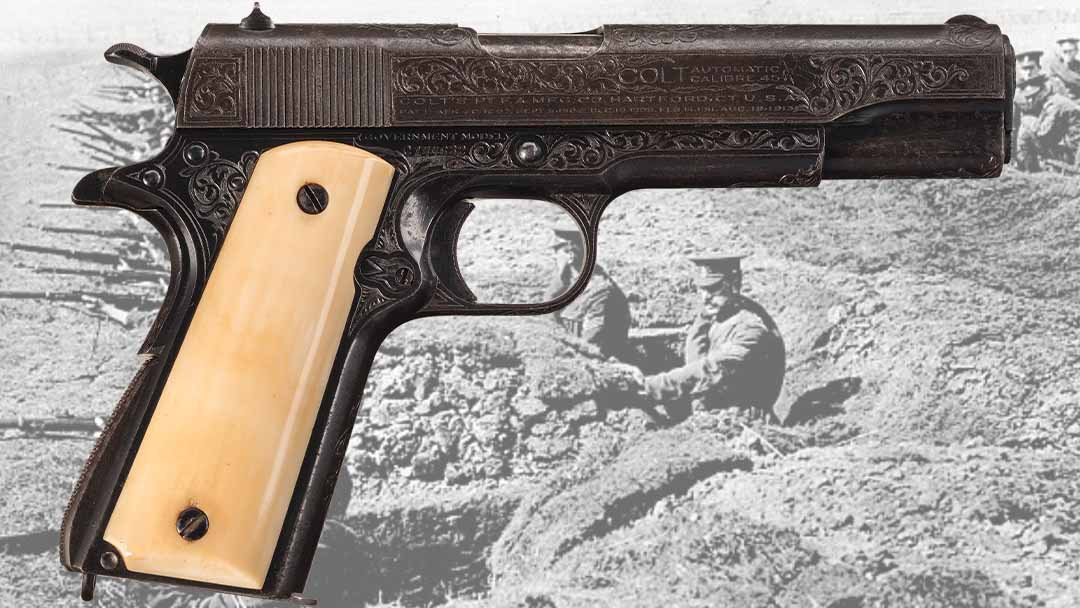 Pershing served as a military observer during the Russo-Japanese War in Manchuria in 1904-05 before serving in several positions in the Pacific, and later an assignment to the American southwest in 1913. While Pershing was assigned to Fort Bliss in Texas because of tensions with Mexico, his wife and four children were living at the Presidio, an Army post in San Francisco where he had been assigned. A house fire in August 1915 killed his wife Francis and three daughters. Only his son, Warren was saved. Devastated, Pershing took his son to live with an aunt and returned to Texas.

As he began the campaign to bring Villa to heel, Pershing embraced the technology of the time, utilizing 30 trucks and eight biplanes in his search for the Mexican outlaw. Privately, Pershing recognized the impossibility of finding his quarry among the mountains and arroyos of the desert, saying finding Villa would be like “finding a rat in a cornfield.”

When the U.S. entered World War I in 1917 generals like Pershing and Leonard Wood, whose career paralleled Pershing, were considered to lead the war push. President Woodrow Wilson handed Pershing the task of leading the U.S. military response. Pershing had his work cut out for him.

“No one in authority had any definite idea how many men might be needed, how they should be organized and equipped or where the tonnage to transport and supply them was to come from,” Pershing wrote. 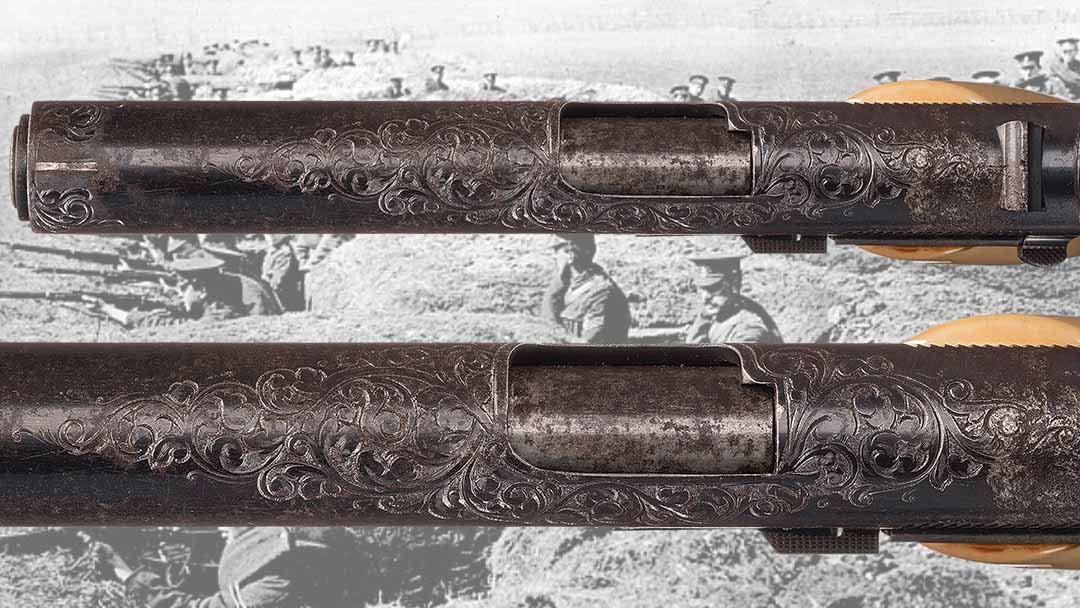 Two different views of the factory engraving of the slide of the Colt Government Model General of the Armies John J. “Black Jack” Pershing presented to Venezuelan President General Juan Vicente Gomez on a diplomatic trip to South America in 1925.

The U.S. Army had only 9,000 commissioned officers and little materiel and manpower, with fewer than 85,000 troops as the United States entered the war with the smallest army of any major country. Eighteen months later more than 2 million Americans were serving in Europe.

When Pershing arrived in Europe, traveling just after his appointment, he was greeted as a hero by the war weary British and French. An early stop in France was to visit the tomb of the Marquis de Lafayette, who was a strong ally of the rebellious colonies in the Revolutionary War. He was quoted as saying “Lafayette, we are here!” though the quote came from another American officer and he persistently denied the quote for the rest of his life.

Through his leadership, Pershing had to train up American troops for battle, equip them, and get them to Europe, transported on ships through the Atlantic U-boat zone. 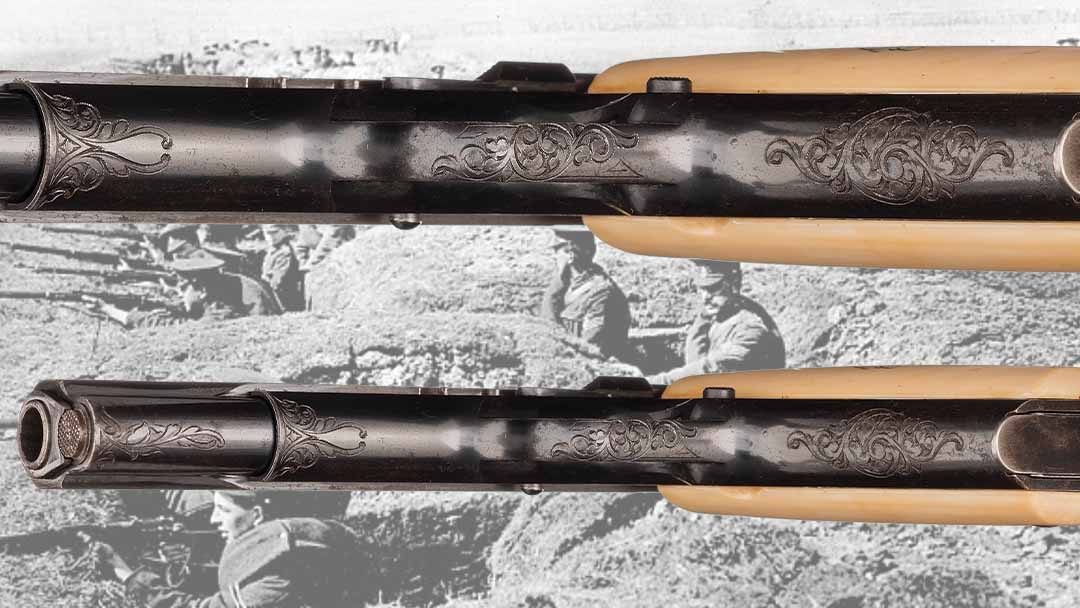 Two views of the factory engraving on the CoLt Government Model that General of the Armies John J. “Black Jack” Pershing presented to Venezuelan President General Juan Vicente Gomez on a diplomatic trip to South America in 1925.

Allied commanders expected the U.S. to simply provide reinforcements for their armies. Pershing stood firm to keep the United States autonomous and became known as the most stubborn man in Europe. American soldiers found their way to the front lines in October, 1917 with more coming weekly, month after month, and continued training as they awaited equipment.

By early 1918, the American ranks had reached a quarter million soldiers just as Germany began a massive offensive in March along a 50-mile-wide front. American soldiers showed their mettle three months later, fighting their way through Belleau Wood for more than 20 days in June.

By late summer the American troops under Pershing began to turn the tide against the Germans and by early November broke the last German defensive line, setting the stage for the Armistice on Nov. 11. With the war’s end, Pershing turned to getting his soldiers and supplies back to the United States. He traveled and accepted congratulations across the European continent. By the end of July, 1919, Pershing’s command was less than a dozen men, most on his staff. He wrote to a friend, “My work is finished.”

Pershing’s work as Army Chief of Staff was administrative. However, he did what he could to see the United States was ready for future wars, restructuring the Army and sending commanders to war colleges. After retirement he was appointed head of the American Battle Monuments Commission, selecting monument designs. In 1931, his book, “My Experiences in the World War,” was published and won the Pulitzer Prize.

The trip to South America wasn’t the only diplomatic mission Pershing went on. He also attended the coronation of England’s King George VI in 1937 at the request of President Franklin Delano Roosevelt. Pershing died on July 15, 1948 at the age of 87 and is buried in Arlington National Cemetery. 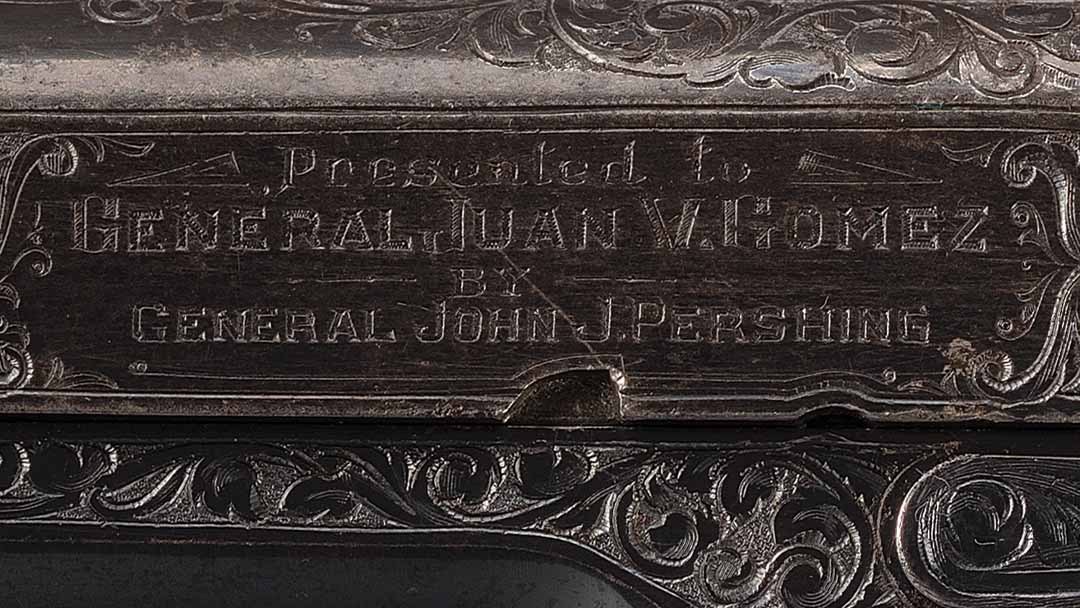 The inscription to Venezuela President General Juan Vicente Gomez on the Colt Goverment Model presented to him by U.S. General of the Armies John J. “Black Jack” Pershing on a diplomatic trip to South America in 1925.

The Colt Government Model pistol with its blued finish was sold to Pershing in July 1925 and shipped to Major Herbert O’Leary who served in the Small Arms Division of the Army Ordnance Department. The gun was shipped with factory floral scroll pattern engraving with the Colt slide markings reconfigured for a presentation inscription that reads “Presented to/GENERAL JUAN V. Gomez/BY/GENERAL JOHN J. PERSHING.” The left scrimshaw grip has the Venezuelan president’s initials engraved.

The gun is a distinguished piece of South American-United States diplomacy that ties in with the brilliant military career of John J. “Black Jack” Pershing who arose from the son of a Missouri shopkeeper to lead the triumphant American Expeditionary Forces in World War I becoming one of only two Americans named General of the Armies, and cannot be missed. 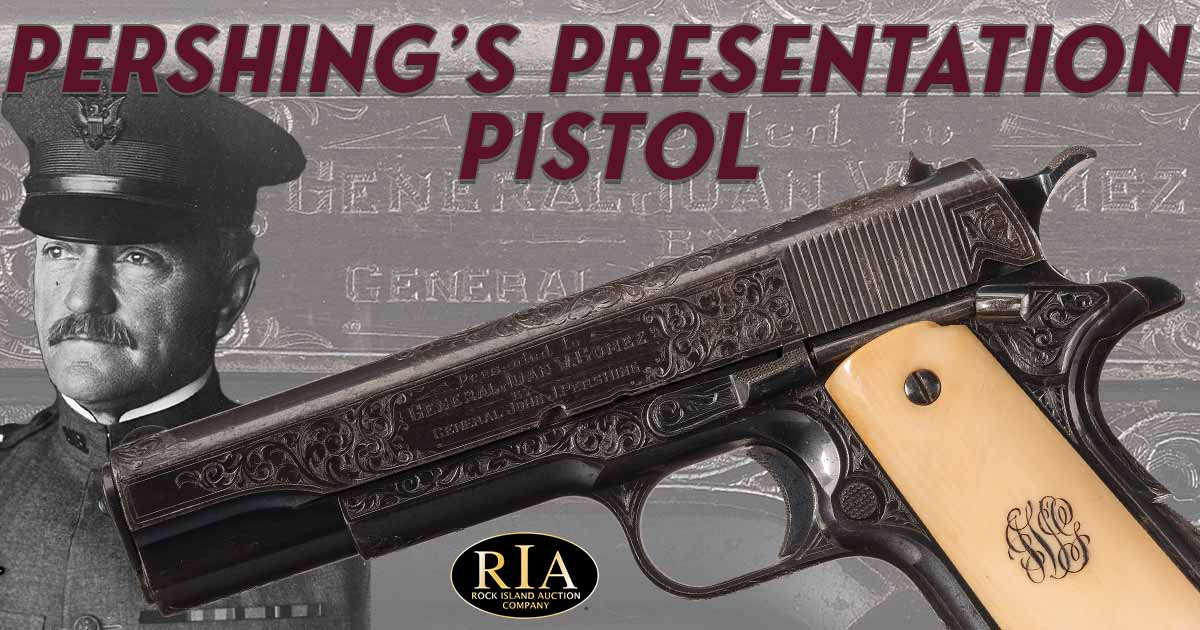