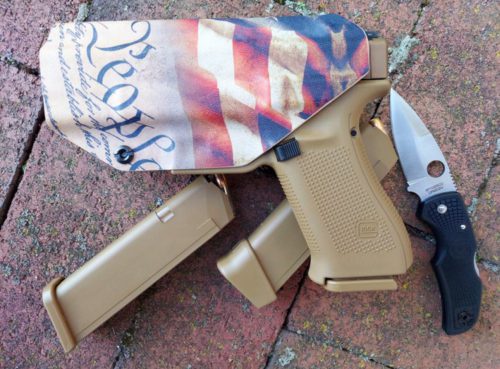 U.S.A. –-(AmmoLand.com)- Recently, the folks at We The People Holsters were kind enough to send me one of their holsters to review. This is not the first holster from WTP (We The People) that I’ve used, and I’ve become accustomed to their level of quality.

This particular holster fits the Glock 19X, which is not the smallest handgun to conceal. I wanted to see how effectively the 19X could be concealed, and whether or not it would be difficult.

The holster I received is for IWB (Inside The Waistband), and I usually carry in the Appendix position (AIWB) in that mode.

We The People offers both Inside The Waistband and Outside The Waistband (OWB) holsters, and they come in a plethora of colors (some solid), as well as several prints. My favorite print is a copy of the US Constitution, featuring the words “We The People” prominently on the holster. I love the color combo and concept, and both of my holsters from WTP have this print (it’s my favorite).

There are a total of 27 colors and prints to choose from in their holster line. they also fit a staggering array of handguns, including those from S&W, Glock, Springfield, Taurus, Ruger, Sig Sauer, Heckler & Koch, 1911s, Beretta, Kahr, Kimber, SCCY, CZ, Walther, Revolvers of all sorts, Bersa, Keltec, FN, Canik, Colt, Browning, and a partridge in a pear tree, the list goes on.

Suffice it to say, no matter what handgun you have, they likely have a holster to fit your gun(s).

These holsters are thick enough and rigid enough to be effective, but not overly thick and heavy. Pistols fit perfectly and lock satisfyingly into place, and there is a screw to adjust the tension to fit the user’s preference. Although the pistol draws really smoothly, it is held securely in place. As well, the holster perfectly covers the trigger guard of the pistol, which is essential for safety, while remaining streamlined and concealable.

The sweat guard is excellent, in that it extends just high enough to be effective while not being so high that it stabs the wearer in the side when he bends over. The edges are not sharp either, so they’re not abrasive on the skin, and I give the holster very high marks just for this aspect.

Also worth mentioning is the belt clip, which is rigid and sturdy and gets the job done well. Thus far, the clips on my holsters have come nowhere near failing, and I never expect them to. Rest assured, once it’s clipped over your belt, it will not be going anywhere. The clip fits a 1.5-inch belt (you can also purchase clips for a 1.75-inch belt).

Aside from holsters, We The People carries apparel, bacon jerky (you need some of this stuff!!), magazine carriers, belts, and other goodies.

Overall, the holster does an excellent job comfortably carrying my Glock 19X, and does it safely. It also looks very cool while doing it! One of the great aspects is the price; most holsters are priced around $40 at the time of this writing, and they’re usually offering specials. For that, you get a quality piece of gear that you’ll be proud to own. I have a feeling that my holster collection is going to be growing quickly.

Jim Davis worked for his state’s Department of Corrections for 29 years. He served as a corrections officer and was also a member of the Corrections Emergency Response Team and the Fire Emergency Response Team. Jim also served as a sniper for CERT and was a tactical instructor at the state Corrections academy. His service includes having worked at one of the largest, most violent state correctional institutions in the country, where he was involved in many violent encounters.

The post Glock 19X Holster from We The People appeared first on AmmoLand.com. 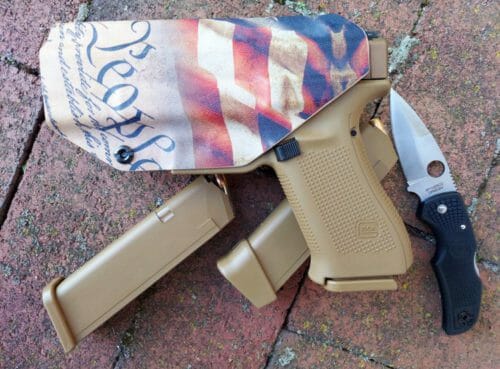