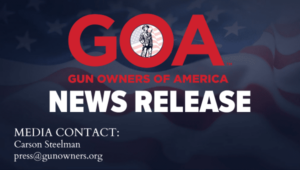 WASHINGTON, D.C. – Gun Owners of America (GOA) filed a petition for Writ of Certiorari in the United States Supreme Court challenging the Bureau of Alcohol, Tobacco and Firearms’ (ATF) 2008 reclassification of bump stocks as “machineguns.”

GOA has been in litigation with ATF since the day the ban was published and was able to win a victory in the U.S. Court of Appeals for the Sixth Circuit, which was later overturned when the 16 judges on that circuit split evenly between GOA’s position and ATF’s position.

Erich Pratt, GOA’s Senior Vice President, commented, “If the ATF is allowed to twist federal law to unilaterally decree that a bump stock is a machine gun, then they can use this same logic to ban almost any semi-automatic firearm and undermine the constitutionally protected rights of Americans.” Pratt continued, “Given ATF’s notorious anti-gun agenda, the outcome of this case will determine if anti-gun bureaucrats can continue using executive fiat to turn law-abiding citizens into felons.”

GOA’s petition argues that the ATF circumvented Congress in their attempt to create new federal law. GOA has argued in lower courts that the ATF’s overly broad definition of “machinegun” could be used to ban other legal firearms. The case comes as the ATF has two additional gun bans in the works – one banning homemade firearms, and the other banning pistol-braced firearms.

Joining GOA in its challenge is the Virginia Citizens Defense League, as well as three individuals, including Tim Harmsen of The Military Arms Channel.

The full text of the Petition can be found here.