We Have to Turn Up the Heat on Joe Manchin and Others!

We need your help with an emergency.

Joe Manchin just announced that he will vote to confirm Ketanji Brown Jackson to the Supreme Court.

That’s why we’re diverting emergency funds into our ad budget to generate a nonstop stream of phone calls into Manchin’s office – as well as 4 other key swing Senators. 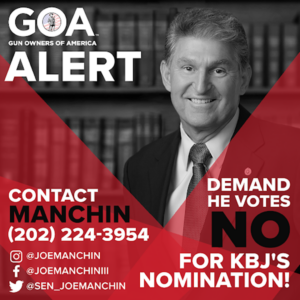 Over 1 MILLION people have seen our ads for the 5 key swing Senators, with an estimated 50,000 taking action.

That’s a rate of over 2 letters per minute.

But with the Senate Judiciary Committee vote now DELAYED until April 4, we need to double our efforts.

Manchin’s phone needs to be ringing off the hook – and we don’t want him to be able to read ANYTHING in his inbox other than emails from his constituents telling him to VOTE NO.

Please make a contribution to our ad fund to pressure Manchin and other key Senators to VOTE NO on confirming Ketanji Brown Jackson.

Even 51% of California voters think Biden is a disaster.

That’s why we need to remind Manchin that if he confirms Jackson, he’ll have a PERMANENT association with this trainwreck of a presidency as Jackson would serve on the Supreme Court for life.

With Manchin up for re-election in 2024 – a presidential year in which there will be MASSIVE TURNOUT among pro-2A voters – we need to show him just how angry the public will be if he puts Jackson on the Court.

Jackson has tried her hardest to hide her true anti-gun sentiments from the Senate Judiciary Committee and the American public, but you and I know the truth…

…If Jackson takes a seat on the Supreme Court, here’s what she could rule as constitutional:

We need to hold Manchin’s feet to the fire and ensure he realizes that a vote for Jackson is a vote to sell out our God-given rights to a tyrannical justice.

So please, make a contribution to our ad fund to pressure Manchin and other key Senators to VOTE NO on confirming Ketanji Brown Jackson.