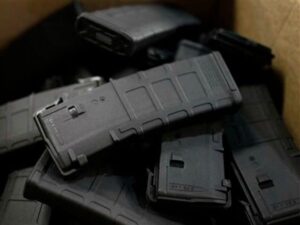 Gun Owners of America, or GOA, doesn’t like gun control. Of course, what pro-Second Amendment group does? One in particular seems kind of stuck in their craw, and that’s magazine restrictions. After all, such restrictions make absolutely no sense. Such laws make assumptions about tactical issues that bear no resemblance to reality.

And that’s assuming they’re really about what proponents claim they’re about.

Now, GOA is asking the Supreme Court to hear a magazine ban case.

“Unless anti-gun radicals like Gavin Newsom and Rob Bonta are held accountable for their blatant violations of the Second Amendment, we can expect anti-gunners in other states to enact the same kind of gun control,” Erich Pratt, GOA’s Senior Vice President, said.

“There is a certain irony that many of the courts which now embrace the notion that Second Amendment ‘arms’ do not include those of a military nature are often the same courts which before Heller had taken the position that the Second Amendment only protected arms in the hands of those serving in state guard units – which presumably would possess and carry ‘military-style’ weapons….”

“The Second Amendment protects first and foremost the right to self-defense — not just against petty criminals, but against governments, both foreign and domestic.”

In 2021, the 9th Circuit upheld California’s ban on high-capacity magazines, despite the policy’s clear Constitutional violations. This is the third amicus curiae brief filed by GOF in this case which was brought by the California Rifle and Pistol Association.

Aside from the clear Constitutional arguments, there is evidence that banning high-capacity magazines do nothing to prevent criminals from committing crimes. According to a report published by Breitbart, Chicago banned “high-capacity” magazines in 2013, but the criminal use of those weapons rose in 2014, 2015, and 2016.

The full text of the brief can be found here…