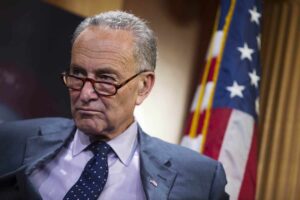 I want to thank our entire list of GOA activists for taking action this week against the voter fraud bill. As you know, anti-gun Democrats will stop at nothing to threaten gun owners’ voting rights.

And that’s why I’m so grateful to those of you who demanded that your Senators stand up against Schumer’s latest power grab.

In short, we won … for now. Anti-gun Democrats failed to get enough votes on the Voter Fraud bill to break the Republican filibuster.

The deceptively named “Freedom to Vote Act” would invite so much fraud into our elections that gun owners would NEVER be able to win at the ballot box again.

As I mentioned earlier this week, this Voter Fraud bill would turn the levers of our elections over to federal bureaucrats who have a burning desire to abolish the Second Amendment.

And critical safeguards against voter fraud would be eliminated, making the 2020 election look like the most secure election in history by comparison.

We will need to stay vigilant, because we can be sure that Senate Majority Leader Chuck Schumer will bring this bill up again. But for now, pat yourselves on the back and enjoy this victory!

Please click here to see how your legislators voted.