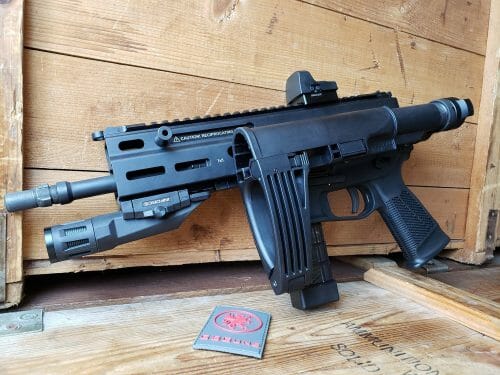 U.S.A. –-(Ammoland.com)- Grand Power is known for its innovative pistols featuring rotating barrels and ambidextrous controls.  What hasn’t been widely known in the US until recently was their development of the Stribog sub-machine gun and personal defense weapon.  Just recently released in the US is the SP9A1 in pistol form.

Since I’m sure you’re wondering about the name, “Stribog” is the name of an ancient Slavic god of storms and force.  Stribog was responsible not just for foul weather, but also the force in wind and water currents.  Grand Power is based and manufactured in Slovakia and so the name is actually quite fitting (and cool in this author’s mind) for a compact personal defense weapon.

What sets Stribog apart from other firearms in this category is the “Dynamic blowback mass bolt” action which places much of the weight required for safe operation above and in front of the chamber.  As a result, Stribog is less than 15″ long including the 8″ barrel.  For comparison that’s a longer barrel and shorter overall length than the popular CZ Scorpion EVO 3 S1 Pistol!

Another advantage of this bolt system is a reduction in perceived recoil as the mass slamming home forward of the grip brings the muzzle back down and in line with the shot.

Check this video for a closer look at the Grand Power Stribog 9mm Carbine Pistol:

Specifications of the Stribog are pulled directly from Eagle Import’s product page.

Blowback operation firearms can be sensitive to the energy generated by the round they fire.  If too little energy is created they can short stroke, too much and they can beat themselves apart.  Considering that Stribog was designed in Europe where 124gr loads are more popular and how short the tuned action of the gun is I wanted to see how it would fare in my “What’s for Dinner” test.  For the sake of science (and fun) Stribog was fed a total of 14 different loads.  Each load was fired three times beginning with the bolt locked to the rear.

This first tests the gun’s compatibility with projectile shape to feed the first round.  Upon firing we’re able to see if the round generates enough energy to cycle the gun, eject the spent casing, and feed the next round.  This step is repeated to reduce anomalies and after the third round is fired we get to see if it’s enough energy to lock the bolt open.

The results of this test can be seen in the video below:

This is only the beginning of our range time with the Grand Power Stribog.  As seen in the cover photo it is now outfitted with a few accessories to make for an excellent home defense piece.  Aiming is augmented with the Nikon Spur Reflex Sight, target illumination with an InForce weapon light, and a Gear Head Works brace is attached to a Matador Arms folding adapter.  I plan on more range trips to include practicing defensive drills and testing for field accuracy.

“Graham Baates” is a pen name used by a 15-year active Army veteran who spent most of his time in the tactical side of the Intelligence community including tours in Afghanistan and Iraq. Post-Army Graham spent some time in the local 3-Gun circuit before becoming a full-time NRA Certified defensive handgun instructor and now works as an industry writer while curating a YouTube channel on the side. Visit Graham on Youtube.