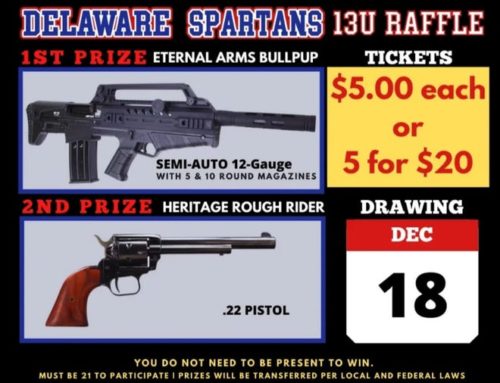 U.S.A. – -(Ammoland.com)- “A raffle to raise funds for a Delaware travel baseball team, in which a semi-automatic shotgun and a .22 caliber pistol are among the top prizes, is receiving some pushback,” the Delaware News Journal reported Thursday. “The raffle benefits the Delaware Spartans, a Sussex County travel baseball organization raising money for its 13U division team. The raffle will take place Dec. 18 live on Facebook.”

Naturally, the hoplophobes are horrified.

Traci Manza Murphy, of the Delaware Coalition Against Gun Violence, wants to know why the team couldn’t raffle off “an iPad or a PS5 instead of a deadly weapon.”

“With all the school shootings that have occurred, it just seems like an ignorant slap in the face to those who have been shot and lost loved ones,” New Castle County resident Heather Burket chimed in.

But Murphy isn’t done. She charges that Delaware’s background check system is not “comprehensive” and says that’s “a system loophole.” That and the state doesn’t require a permit to purchase a firearm like Maryland and New Jersey, which is one of the big infringements her group is working on.

But back to her “loophole”:

“We do not have a comprehensive criminal background check, so for example, even if a local law enforcement officer has been called to your house 20 times in a year because of domestic disturbances but there has never been any record of charges filed, you can walk into a gun store today and buy a gun.”

Forget asking how often cops have been called 20 times in a year at the same house on domestic disturbances that warranted an arrest and just walked away from it. Try “never.” The point here is to lay on the hyperbole and stir up the hysteria with people who can’t think. What the Coalition is upset about is that their countrymen who haven’t even been charged with anything, let alone convicted, can still buy a gun.

What should we call that, the “innocent until proven guilty loophole”?

And as with all grabbers, it’s not like any infringement will ever be enough. The Coalition’s Facebook post praises removing firearms from those “who are in the process of being served a Protection From Abuse Order” and banning “ghost guns.” More of a challenge would be to find a disarmament edict they don’t support.

For its part, the Delaware Spartans released an official team statement that says in part:

“All local and federal laws are being followed with this raffle as with any other raffle that we have and will conduct in the future. At no time are the kids in the presence of the items that are being raffled. Once the winner is drawn on December 18th, the items will be given to a dealer with a Federal Firearms License. At that point, the winner will have to go through the same federally mandated process as anyone else that would want to purchase them. If they are not able to meet the federally mandated regulations, the items will be raffled off again next year.”

It figures taking a good thing, such as a lawful raffle in support of traditional American values, would get the antis in hand-wringing mode, and that includes the News Journal, part of the USA  Today network, and a Gannett publication. There’s a group of doctrinaire violence monopoly cheerleaders that’s never seen a gun it didn’t want to also see grabbed.

One point the article brought up that gun owners would do well to keep an eye on:

“Ron Hagen, co-owner of Best Shot firearms sales … said that while he was surprised that ‘Facebook is letting them do that…’”

Don’t be surprised if the antis start screaming furious demands to get it “canceled.” Hopefully, the raffle tickets will sell out before then, and the Spartans can still conduct it even if it can’t be hosted on Facebook. Per a Spartans post where they were asked if out-of-state people could support the raffle, their answer was “Yes you may.” 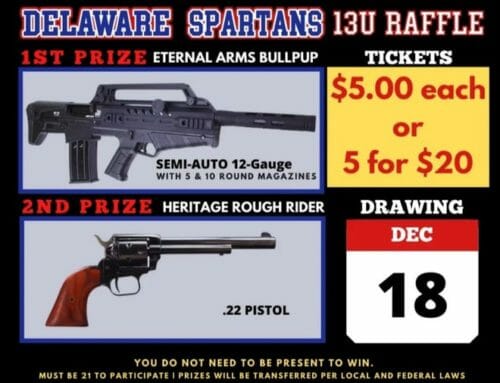