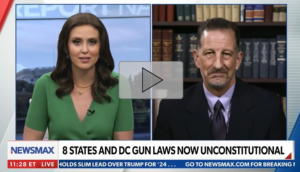 The Supreme Court’s Thursday ruling affirming Americans’ rights to carry guns in public is a “good day as far as the protection for the Second Amendment,” said Erich Pratt, the senior vice president of Gun Owners of America on Newsmax.

He added it will save lives when people are able to better protect themselves, shortly after the court’s ruling was announced.

“We’re obviously very ecstatic,” said Pratt on Newsmax’s “National Report” “This is a great opinion, and they couldn’t have picked a better justice to write the opinion than Justice [Clarence] Thomas.”

Thomas wrote for the 6-3 majority that the Constitution protects “an individual’s right to carry a handgun for self-defense outside the home.”

The justices’ decision strikes down a New York law that requires gun holders to demonstrate a particular need to carry a gun in order to get a license that allows them to carry guns in public.

Pratt said he also thinks the decision will impact the Senate’s work on the bipartisan gun safety bill.

“Here you have the Supreme Court smacking down gun restrictions, while the U.S. Senate is trying to impose more restrictions,” said Pratt.

New York Gov. Kathy Hochul, speaking out against the ruling, said that it is “outrageous” to allow guns to be carried in public and called the court’s decision reckless.

Pratt, however, said the issue with New York’s law is that it requires a person show just cause for carrying the gun before “they can exercise the right of self-defense,” but “we don’t do that with other God-given rights. We certainly shouldn’t do that with the right to keep and bear arms.”

Another issue is that gun permitting systems allow officials to exercise “extreme bias” and that has led to “horrible discrimination or harassment around the country,” said Pratt, but now, “we’re glad that the Supreme Court has breathed a breath of freedom into the air here.”

Pratt also said that he agrees with Rep. Elise Stefanik, R-N.Y., who commented that the ruling upholds the constitutional rights of law-abiding citizens.

He also added that the left is “out of step” with the Constitution and the American people when it comes to guns.

“The Biden administration was arguing against concealed carry in this case, and obviously they got overruled,” said Pratt. “Don’t forget that last year, the Biden administration argued before the Supreme Court that it was OK for police to go into a home and confiscate firearms without a warrant. The Supreme Court smacked them down nine to nothing.”