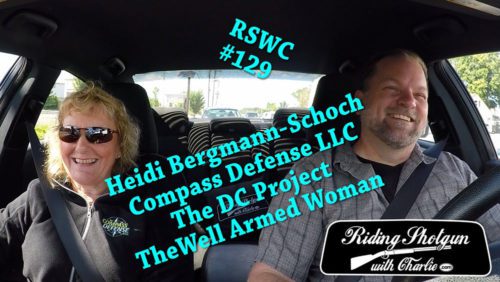 U.S.A. -(AmmoLand.com)- This past fall I had a trip to New Jersey to hang out with John Petrolino (RSWC #093).  As we were talking, I mentioned that this was my first trip in over 2 years without having filmed a show someplace. After some brainstorming of previous New Jersey passengers, we came up with Grant Gallagher (coming soon) and Grant told Heidi Bergmann-Schoch about this and asked if she wanted to be on the show, too. He said she’s a great instructor and she has worked with him for years. After lunch, we filmed the shows then I headed home.

Heidi started her career as a police officer, specifically a K-9 officer.  She started the K-9 officer program in her town and was the K-9 officer in several towns.  After being an officer for 7 years, she contracted Lyme disease and had to retire. Wanting to still give to the community, she got into paramedics. Before being a paramedic, she had to train for an EMT position. She was a paramedic for about 10 years before she bought a farm and got into raising and training horses.

Heidi eventually decided to get back into firearms and training.  She connected with Grant Gallagher from ScotShot (his episode is coming soon). She taught with Grant for 5 years before starting out on her own. She’s certified to teach NRA & USCCA courses at many levels and disciplines. I always find it interesting that, unlike Massachusetts, New Jersey doesn’t have “approved courses”. But that doesn’t mean the process is easy or quick.

We talk about some issues that new students of the gun have. Things like buying a gun that isn’t good for the student. She calls the new students with new guns the “2A Minnie Pearls”. Yes, you have to be of a certain age to get that reference! I share some stories with some gun clients that I had as well. She also shares a story about some students with snub revolvers who shouldn’t have had snub revolvers due to the size of the gun and the size of the student.

Besides being an instructor, Heidi is also involved with The DC Project and The Well Armed Woman. She started with The Well Armed Woman by getting ‘sucked in’. She was teaching at a range and the range wanted to start a program.  She did all the paperwork and legal stuff to start a chapter, including making some videos and passing a qualification on video. Her chapters meet once a month and have an education section and live fire, then dinner with the girls.

Her involvement with The DC Project is helping “educate over legislate”, which is the group’s motto. The DC Project is aiming to get women to speak to their legislators at the national and state levels, and share their stories about why they own firearms and why the 2A issue is a women’s issue.

It’s really great to have the chance to meet more folks in the firearm community.  Gun people really are the best people. And Heidi is one of them.

Favorite quotes
“The police classes were more practical.”
“That’s why I started to change over more to the United States Concealed Carry Association. Their curriculum is more towards the practical use of a firearm in a defensive sense.’
“They come in with the tag on it. They come in, they’re a 2A Minnie Pearl.”
“I can’t explain how good the gals are that I have. They are so generous. They are so kind. They support one another.” 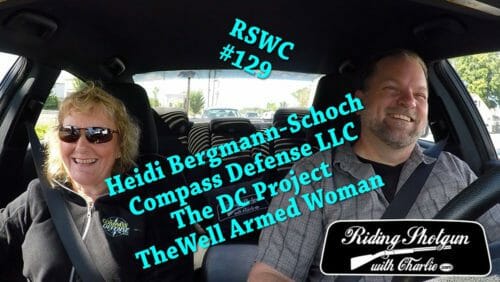