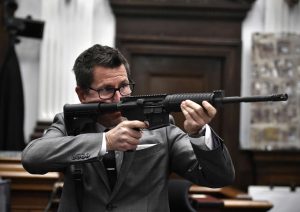 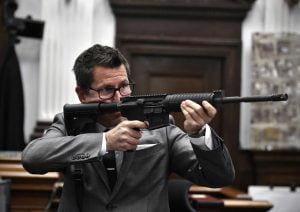 Prosecutor Thomas Binger apparently placed his finger on the trigger of an AR-15 as he pointed the gun during the Kyle Rittenhouse trial.

The primary role of a prosecutor is to protect the community; they play a pivotal role in the administration of criminal justice.  In other words, it is the duty of a prosecutor to maintain the public’s safety by prosecuting those who threaten the overall well-being of the community.

And then there’s the lead prosecutor in the Kyle Rittenhouse trial, who shouldered and pointed an AR style rifle – with his finger on the trigger, no less – during his closing arguments on Monday.

A lot of people – justifiably so, were horrified at the stupidity of Thomas Binger clearly violating the number one rule of how to safely handle a gun.  Many commented – including me – that he may have taken firearm safety lessons from none other than Alec Baldwin.  The bottom line is, unloaded or loaded – never point a firearm at anything you aren’t willing to destroy. NEVER.

Using a gun as a prop to make a point is one thing – but to shoulder it with a finger on the trigger is another thing altogether.  Sheer stupidity.

Obviously, Binger wanted to do the “big bad scary black gun” thing.  His singular motive was to rattle some nerves so the jury would take their eyes off the evidence of Rittenhouse’s declaration of self-defense.  Will it work?

Now that remains to be seen.

Not only is Kyle Rittenhouse on trial, but every 2A loving American should understand that our ability to defend ourselves is on trial, too. The prosecution went so far as to state that “You lose the right to self-defense when you’re the one who brought the gun. When you’re the one creating the danger.”  This guy is dead wrong.  Law-abiding gun owners are not criminals. Any individual using a firearm to LEGALLY defend themself is precisely why the Second Amendment is so important to protect.

Rather than becoming a safer place in the last (almost) two years, our world is plagued with elevated anxiety about a lot of things – personal safety being chief among them.  This is exactly why the sale of firearms has shot up and the number of new gun owners nationally in the past year tops over 5 million.

Gallup also notes that support for a handgun ban is down as well – it reflects the lowest point since surveys about such a ban began to be taken in 1959.  Clearly, the debate is shifting.

And that’s a good thing.