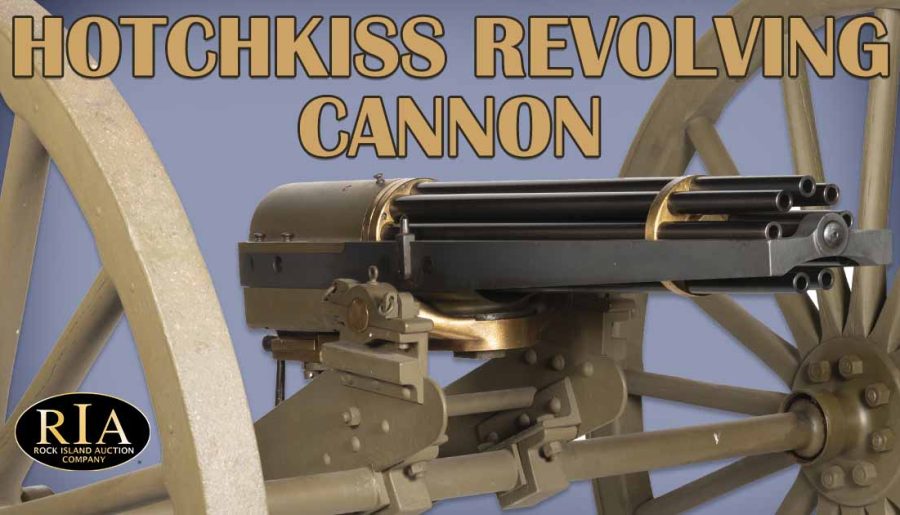 Benjamin Berkeley Hotchkiss was born in 1826 to a family of inventors in Connecticut, the hotbed of gun creation in the 19th century. The family had a business that manufactured many of their inventions, including an early variation of a monkey wrench.

Early in his career Hotchkiss worked as a gun maker for Colt and Winchester. He patented a cannon shell for rifled cannons. More of his shells were used for rifled cannons during the American Civil War than from any other munitions maker. 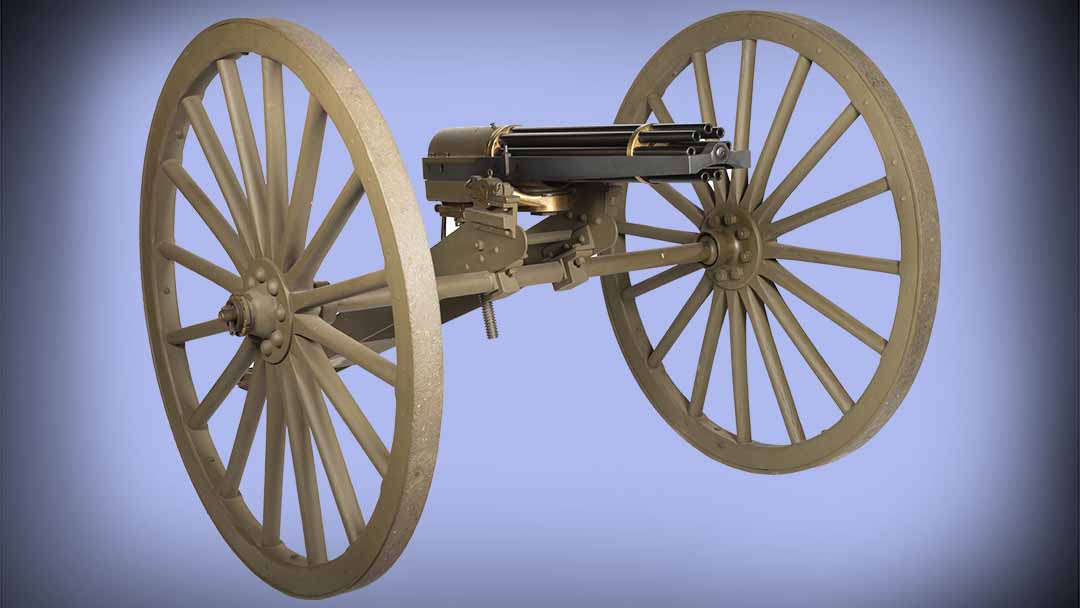 This late prototype of the Hotchkiss Revolving Cannon will be available in Rock Island Auction Company’s Feb. 14-17 Sporting & Collector Auction.

A rapid-fire gun was long a dream of military leaders.

The Puckle gun, designed and patented in 1718 by London attorney James Puckle, is considered one of the earliest predecessors of the machine gun. Designed for naval defense against smaller, faster ships, the Puckle gun was a single barrel flintlock with a revolving cylinder that could fire off a whopping nine shots per minute before swapping out the cylinder for a freshly loaded one. In military tests it was found to be unreliable. 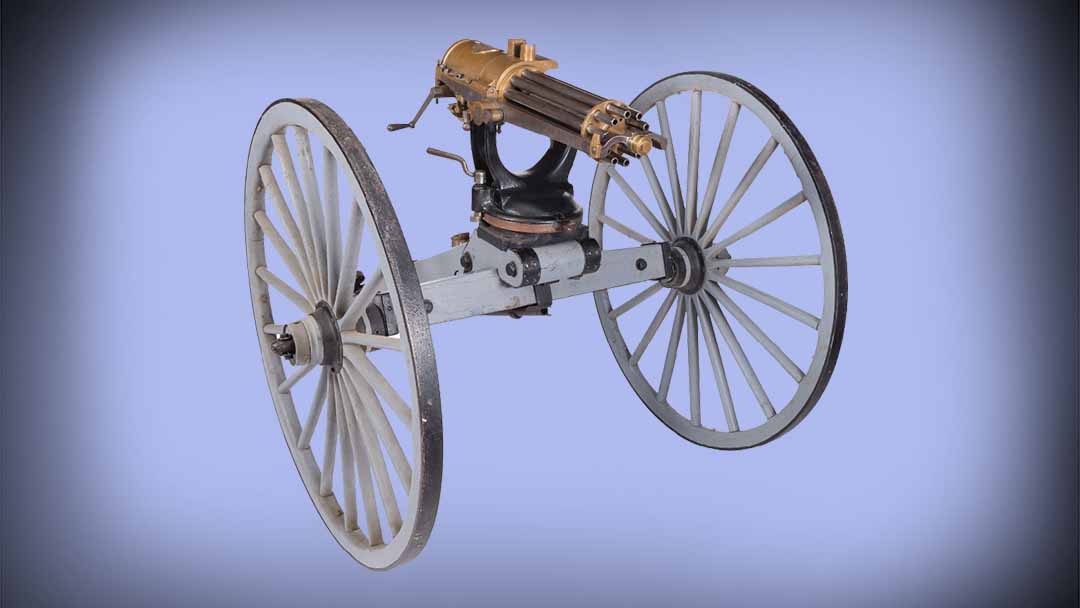 After the Civil War, the U.S. Government wasn’t interested in new munitions, so Hotchkiss went to Europe where it seemed in a perpetual state of war. He established a factory in France on the eve of the Franco-Prussian War in 1870 where he made metallic cartridges for small arms. It was here that the Hotchkiss Revolving Cannon was born.

Hotchkiss saw shortcomings in the Reffye Mitrailleuse, the French volley gun that fired ammunition from a 25-cartridge magazine in separate barrels within a cannon sleeve. He saw the French weapon had a fragile firing mechanism and a narrow cone of fire. 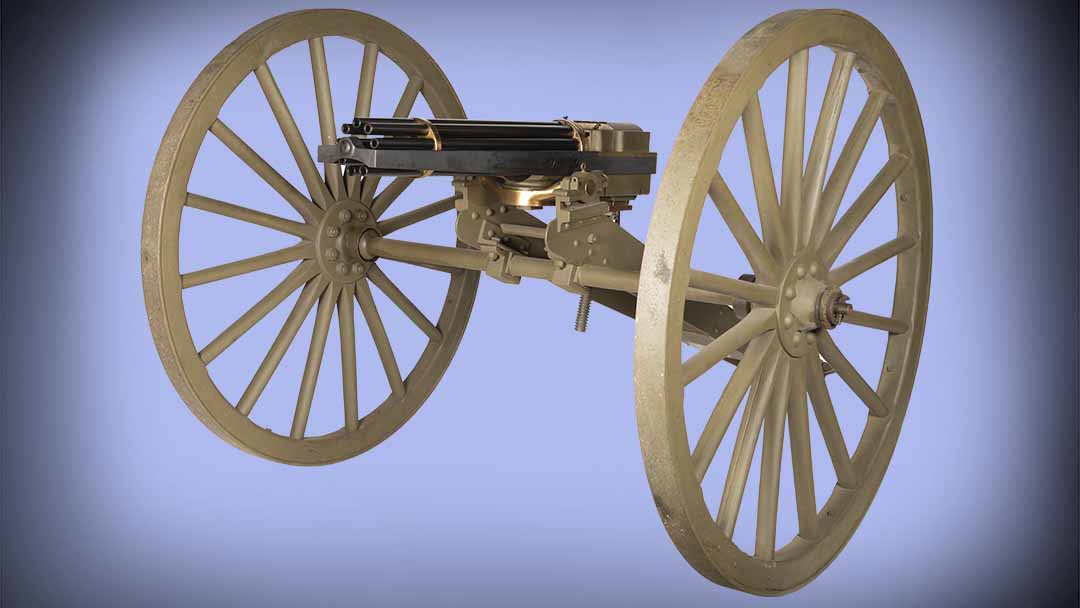 The Gatling gun had a bolt for each barrel, but the Hotchkiss Revolving Cannon had an immovable breech block with a bolt. One rotation of the crank handle was a firing cycle for the revolving cannon that stops the barrel in place for firing accuracy.

The Hotchkiss Revolving Cannon used what one 1879 publication called 10-round “feed cases” to load cartridges into the gun. With an assistant gunner to load ammunition, it could fire about 60-80 rounds per minute out to a range of about 4,000 meters. The gun offered no recoil so one gunner could fire it with accuracy if it was suitably mounted.

The gun was produced too late for use in the Franco-Prussian War but faced trials by the French Ministry of Marine as a maritime weapon. As a naval gun, the Hotchkiss Revolving Cannon could fire about 15 shots a minute aimed at a fast-moving target, like a torpedo boat.

During testing, 1,136 rounds were fired with only five malfunctions. The gun destroyed a boat during trials, hitting the ship 70 times out of 119 shots aimed at it.

As a field gun, the Hotchkiss Revolving Cannon was considered as an anti-personnel weapon because the shells weren’t very powerful. Firing canister shot could spray 7,000 balls per minute with an effective range of 2,000 yards. It was also considered for use arming railway cars guarded by steel shields to protect from small arms fire. 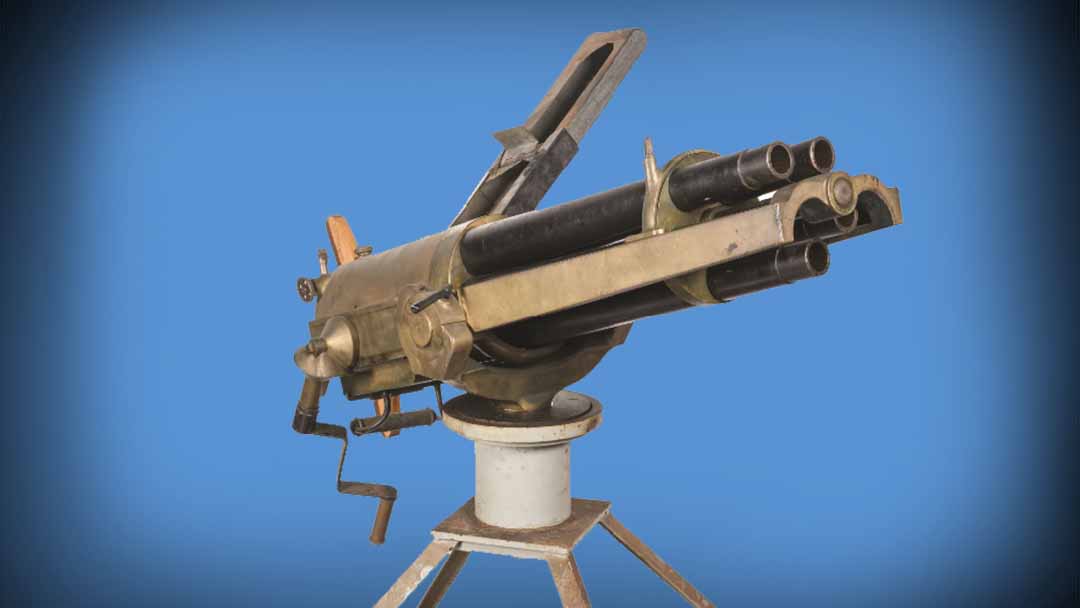 Naval Use for Hotchkiss Revolving Cannon

The naval model revolving cannon was adopted by the French Navy in 1877. By 1880, the Hotchkiss Revolving Cannon was adopted for naval use by Brazil, China, France, Holland, Greece, the United States, Chile, Argentina, Russia, and Denmark.

However, its time was short as a naval weapon as torpedo boats grew larger and were better protected. The Hotchkiss Revolving Cannon was also made in 47 mm and 53 mm sizes, but the multi-barrel guns increased in weight and could no longer be mounted aboard ships where they were most effective. The revolving cannon was out of vogue by the early 1890s with the advent of the machine gun. 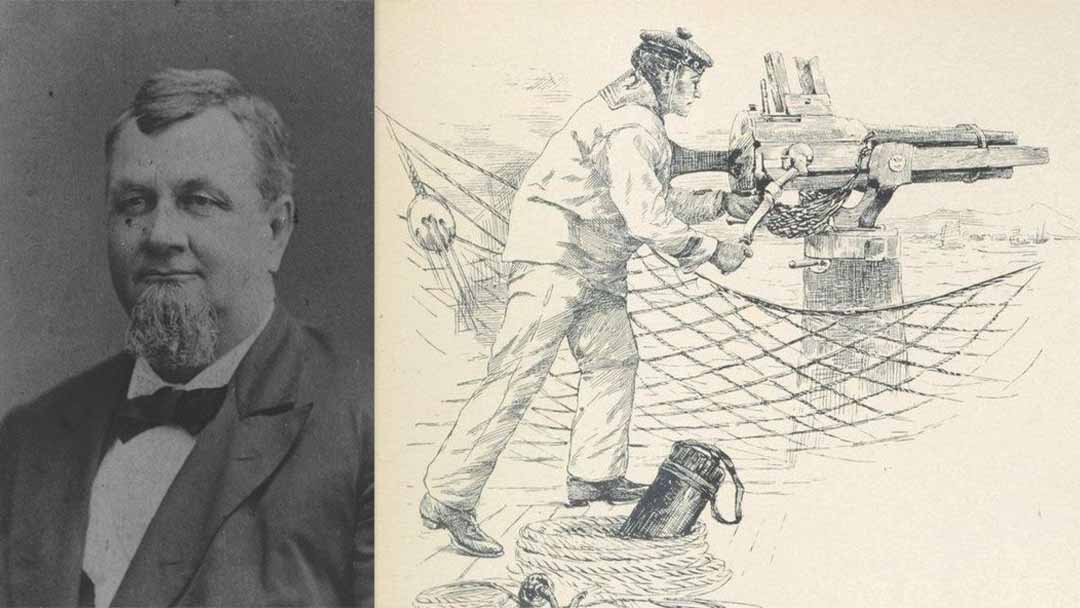 Benjamin Berkeley Hotchkiss is seen at right, next to a drawing of a naval Hotchkiss Revolving Cannon.

Benjamin B. Hotchkiss began working on an automatic machine gun to compete with the Maxim that came out in 1884.  Designed in England by Hiram Maxim, his machine gun was used by every major power. Hotchkiss never got to see a working machine gun from his company. He died in 1885 before a design could be developed.

Before the turn of the century, Hotchkiss’s company eventually developed the Model 1897 that went through three variations before becoming the Model 1914. The era of automatic weapons had begun. In World War 1, the Germans fought with the MG 8 that was a version of the Maxim machine gun, while the British used the Vickers machine gun, also based on Maxim’s weapon.

Legendary gun maker John Moses Browning would soon provide a machine gun for the U.S. military but production couldn’t ramp up fast enough to get his M1917 in the war until late 1918. His Browning Automatic Rifle, or BAR, was also adopted by the United States as a light machine gun and was in the hands of doughboys by the end of the war. 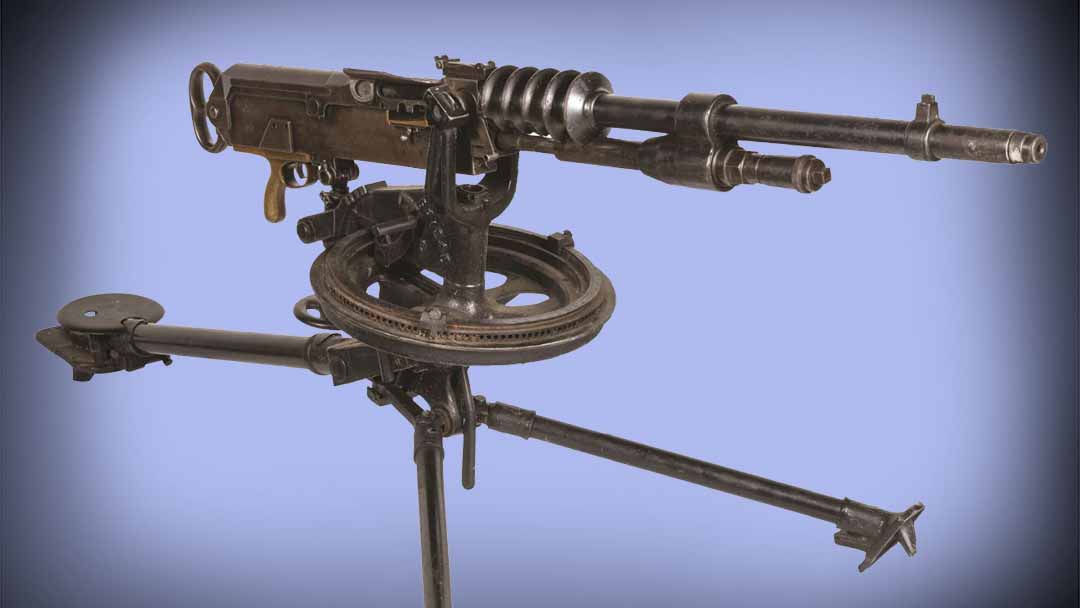 This particular Hotchkiss Revolving Cannon looks more like a Gatling gun, with its nine smaller caliber barrels as opposed to the five 37 mm barrels on the U.S. Navy Hotchkiss shown earlier. However, a peek inside the receiver shows a single bolt, rather than the multiple bolts inside the Gatling. This unmarked prototype is chambered to fire .6335 caliber ammunition (approximately 16 mm), and is likely from the turn of the 20th century. A Bureau of Alcohol Tobacco and Firearms letter that accompanies the gun concludes that the receiver is similar to to the original design of the Hotchkiss Revolving Cannon and the the barrels are chambered for a one-of-a-kind black powder cartridge that is no longer manufactured in the United States.  In scouring our library, we were unable to find any similarly chambered Hotchkiss cannons, leaving an air of mystery around this model.

While Benjamin B. Hotchkiss may not land among the great gun inventors like Browning, Samuel Colt, or Daniel Wesson, his vision of the revolving cannon helped bridge early attempts at automatic weapons to the machine guns used in World War 1. This piece of history is part of the evolution of full auto guns born out of 19th century European land wars.

Roads to the Great War

“The Hotchkiss Revolving Cannon” by Alfred Koerner, published in 1879 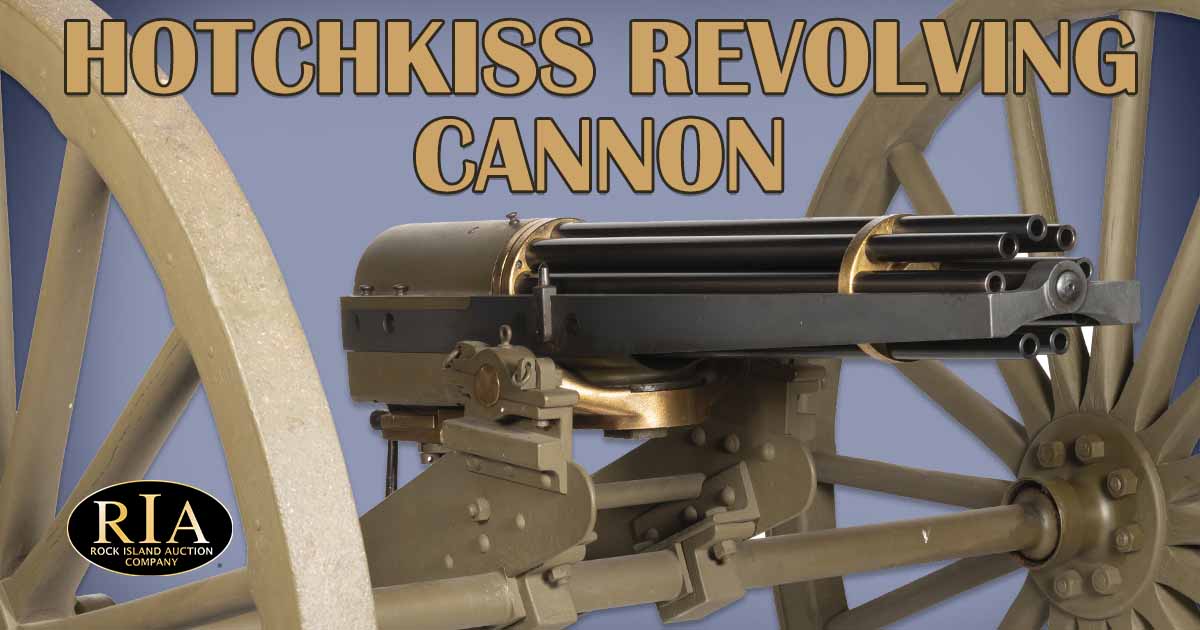