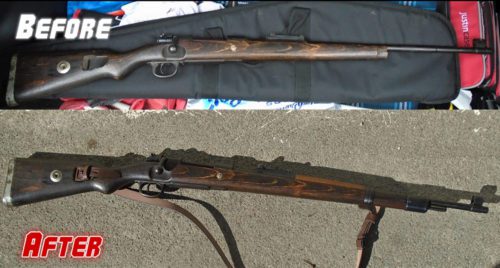 U.S.A. -(AmmoLand.com)- One of the most iconic guns out there is the Mauser 98, especially the Karabiner 98K, the main rifle of the German military throughout World War II. Collectors over the last few years have been fawning over them, the prices continue to go up, especially for clean examples and then when you get into the rarer SS and sniper variants they can stream into the stratosphere. So, finding a nice K98 these days at an affordable price is not an easy task.

A few months ago, I happened on to a K98 in a local gun shop that was more the most part in very good condition, happened to be a numbers matching gun, and a later war variant at that. The only trouble was, that the gun was what’s known as a duffel cut bring back, meaning that the stock had been cut so that when the rifle was taken apart, it would fit inside the duffel bag of a returning GI who wanted to bring home a souvenir. With no import markings anywhere on the gun, that confirmed what it was, however, the piece that had been cut off was missing, lost forever and who knows where along with the forward bands and bayonet mount. Still, the price was only four hundred dollars, and with a bore that was cleaner than most K98’s that I’ve seen it was worth the price.

At first, I was going to buy a replacement stock for the rifle, but then I noticed something peculiar about it. The there was no hole drilled into the stock at all for a cleaning rod, or the small latch that holds it in place one the rod is seated. That means that not only was this a late issue gun, but it’s what’s known as a partial-Kriegsmodell rifle. As the war progressed, guns were being turned out of the factories faster and faster as the fighting was going badly for Germany. By late 1944, there were corners being cut on K98’s to get them out the door and into the hands of the troops faster. The finishing on wooden stocks became less refined, the bluing turned into duller colors and finally a phosphate finish. Wooden stocks that lacked the takedown disc, a bayonet mount, cleaning rod, and instead of the forward bands being held in place by a spring were simply mounted with wood screws became known as Kriegsmodell guns. The floorplate would also be a simple, stamped affair with only two screws instead of the four to hold it and the screws in place like the earlier version. Any guns with only a few features missing were known as partial-Kriegsmodell guns. So, I decided to do my best to preserve the stock as it was since it was original to the gun.

This 98K was made in 1944 and from what the serial number puts it as, in November, definitely the leaner of times for the German military. It was made at the Waffen-Werke Brunn plant in Czechoslovakia and you can see that the finish isn’t as nice as I’ve seen on earlier guns and the wood stock has imperfections that you can feel as you move your hand over it. In October of 1944, the numbering of smaller parts on the 98K stopped, such as the magazine floorplate, buttplate, barrel bands, rear sights, etc. in an effort to speed up production. The bolt and its components were still numbered as was the receiver, that would make getting parts for my gun simpler in one way, harder in another as unnumbered K98 parts seem to be tougher to track down, but once on the gun, they would look correct.

I located a piece of stock that was just what I needed, even though the color of the wood was off some due to different laminate wood being used. I had never tried to repair a duffel cut before, and I have to thank Mark Novak and his excellent videos online in making it easier to want to attempt and giving me the confidence to try. So, I got some Acraglas and got to work.

The first thing I did was to take the stock off and trim it down where it would be a good match under the rear barrel band. I cut the rifle’s stock down to past the channel where the spring that holds the band in place lies so that it would be a solid joint. I then after measuring another stock I had on hand several times, cut the donor piece down to match, sanded them flush to mate up. I then drilled a hole in the stock for a large pin that would help keep the stock together even with the Acraglas. I added two smaller pins to keep the stock from being able to twist left or right under recoil. I glued that in place and then since drilled matching holes in the donor piece. I also drilled a pair of small holes in the channel where the pins were to allow Acraglas to be able to escape, if need be, on the inside of the stock.

A word of advice when using Acraglas, make very sure you use enough release agent. I coated the barrel three times and make sure you get all sides, even where you don’t think you might need it. There’s nothing worse than trying to pull off a stock that now is stuck to the gun. I didn’t have that experience, but I wanted to make darn sure I didn’t either.

After applying a very liberal amount of Acraglas to both pieces of wood and the pins it was secured together, the action was put into the stock and screwed in place and I taped the barrel so that nothing moved. After 24 hours, and the Acraglas was good and cured I removed the action from the stock and was pleasantly surprised at how well it came out. With only a small amount of trimming off the hardened Acraglas from the outside of the stock, it was ready to be reassembled.

After all the parts were in, I reassembled the rifle and took it to the range for a test of both the 98K’s accuracy and if I had done the job properly. I shot five rounds of Yugoslavian surplus 8mm Mauser ammo as well as five 170 grain Federal commercial hunting rounds. The accuracy with the Federal was excellent at 50 yards, where as the surplus ammo was a little more ragged. But this was more to see how well the repair work held up. When I got the gun home, I took the stock apart and found that the repair had held up with no issues at all.

Later on, I took some Minwax Jacobean stain in an attempt to darken up the donor section of the stock to get it to blend in more. The last thing I did was to take and put in and glued a wooden dowel where the cleaning rod hole of donor piece and filled the end in with wood putty, blending it in and making it a solid piece to match the fact that it was originally made without a cleaning rod hole drilled for it. While the gun will never be original, it now looks somewhat like it once did in 1944 when it left the Brunn plant.

This repair job was not as imposing as I thought it would be, again thanks to Mark’s video which I recommend everyone looks at if you’re considering repairing a gun like this as there are many duffel cut bring backs out there, more than I realized at first. I will say this, if I can do it, anyone can, and if it puts an original gun back in action once again, then it’s well worth it.

David LaPell has been a Corrections Officer with the local Sheriff’s Department for thirteen years. A collector of antique and vintage firearms for over twenty years and an avid hunter. David has been writing articles about firearms, hunting, and western history for ten years. In addition to having a passion for vintage guns, he is also a fan of old trucks and has written articles on those as well.