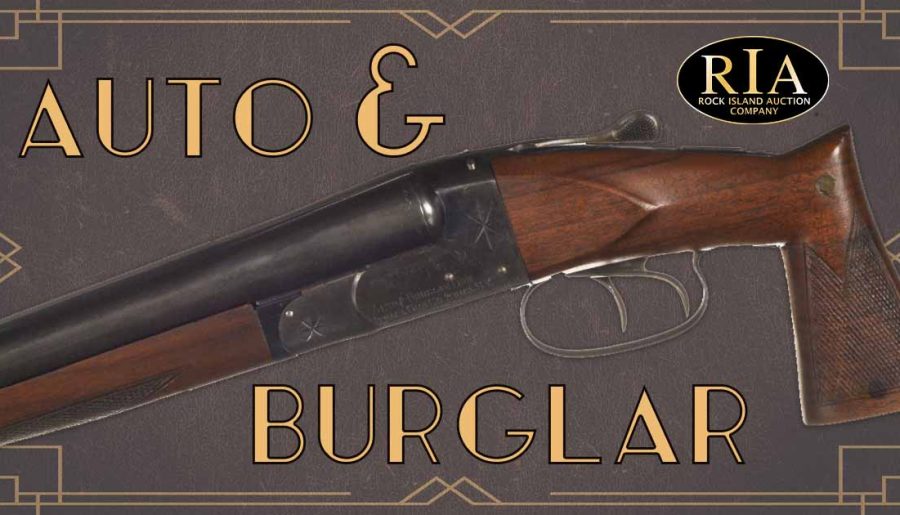 In the early 20th century, the backwoods of America could still be lonely and lawless places for travelers and personal protection for truck drivers and couriers was a necessity.

From 1921 to 1934, Ithaca Gun Company offered its Auto & Burglar pistol. Originally based on its Flues shotgun, the Auto & Burglar was a 20 gauge double barrel short barrel shotgun with a pistol handle that was marketed as protection for travelers and self-defense at home to take care of car thieves or burglars.

The Smithsonian Institution’s National Museum of American History and Cody Firearms Museum each have an Ithaca Auto & Burglar in their collections. A collector can add one to their collection this fall as an Auto & Burglar pistol and four Ithaca Flues double barrel shotguns will be on offer in Rock Island Auction Company’s upcoming Sporting and Collector Auction, Oct. 4-7. 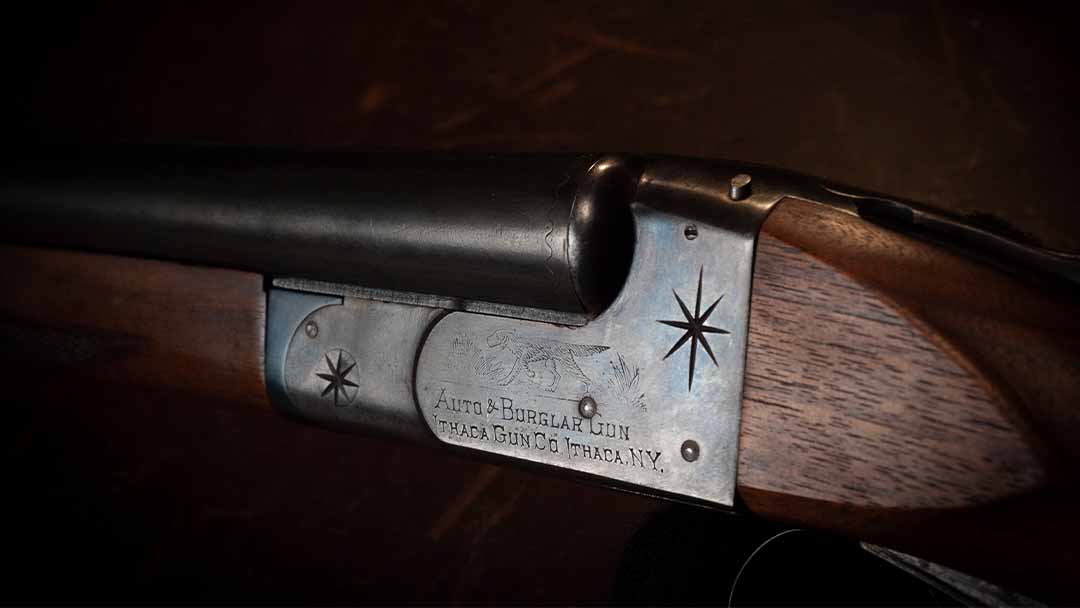 Ithaca Gun Company, known for its sporting arms, even has a hunting motif on its Auto & Burglar pistol for personal defense.

Rock Island Auction Company offers the most amazing selection of shotguns at each sale. A sporting arms aficionado can find a refined offering like a Firmo Fracassi Engraved 20 gauge Rizzini shotgun or something martial like a U.S. marked Winchester Model 12 trench shotgun that was sold in the August Premier Auction, to something more down and dirty like a S/S Inc. Street Sweeper in the May Premier Auction.

For hunters, field-ready guns are available in RIAC’s Sporting and Collector Auction, Oct. 4-7, and any Arms and Accessories auctions like the Oct. 19 A&A Auction.

Ithaca’s Auto & Burglar, though based on a shotgun, fell under the National Firearms Act of 1934 as an “Any Other Weapon” (AOW) because of its short barrel and smooth bore, initially requiring a $200 transfer tax. The transfer tax was lowered to $5 when the law was amended in 1968. 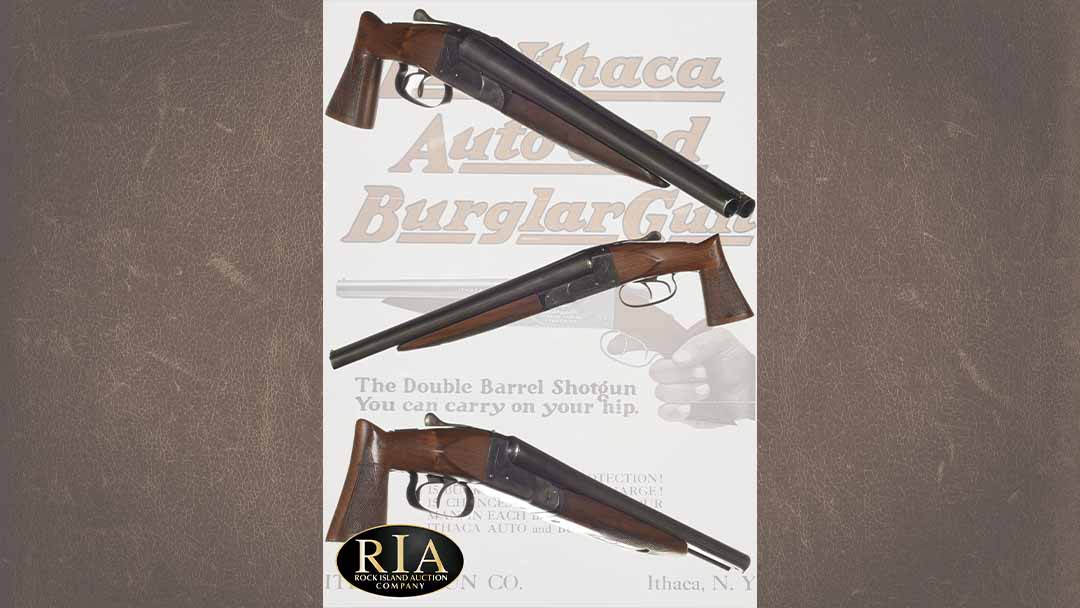 Like the advertisement says, the Auto & Burglar pistol is “the double barrel shotgun you can carry on your hip.”

An Ithaca catalog of the time called the Auto & Burglar perfect for automobile use, home protection, for police officers, guards, and couriers. “Here’s the Ithaca Auto & Burglar Gun, which hold-up men fear…” The price: $37.50 before tax but with a holster, tag on an additional $4.

An Ithaca advertisement of the time used the endorsement of Frank Barnet, the president of the California Sheriff’s Association, stating that an Ithaca Auto & Burglar Gun is “an imperative necessity as a protection against life and property” for every sheriff, peace officer, and bank in California.

The ad also read, “Even a Nervous Bank Employee Can Hit with an Ithaca Auto & Burglar Gun.” 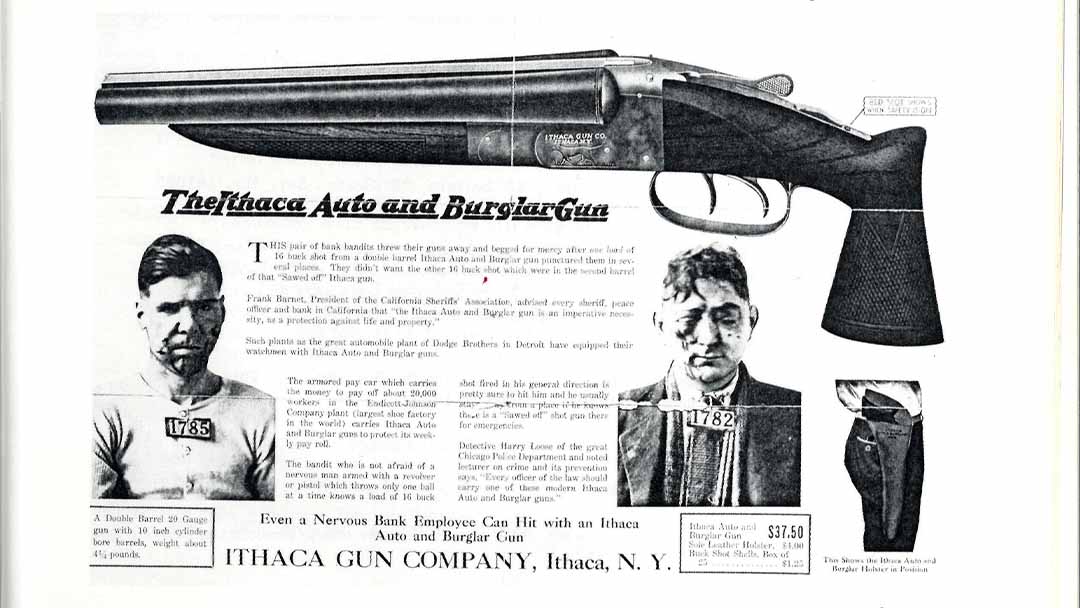 The Auto & Burglar Pistol Model A, first produced in 1921, came with a 10-inch barrel that fired 2 1/2 inch 20 gauge shells and featured a grip with a spur on top of the grip to aid with recoil and prevent barrel rise. Removing the spur was one of the changes made when other Model B changes were made because it easily broke off when dropped.

The redesigned Model B followed in 1925, based on the New Ithaca Double (NID) Model shotgun that was introduced that same year.  The barrel was lengthened on the Model B Auto & Burglar, measuring 12 3/4 inches and was fitted with a more traditional pistol grip. It also was made to take 2 3/4 inch shells. About 2,500 Model A pistols were made, while about 1,500 of the Model B were manufactured. The gun weighs about 4 lbs.

While mainly chambered for 20 gauge shells, the Auto & Burglar could also be ordered in .410 bore, 28 gauge, and 16 gauge, though photos do exist on the internet of a 12 gauge version, as well. Despite this, the .410 bore is still held to be the rarest of the calibers with only 12 known to exist. The gun, which weighed in at about 4 lbs., was discontinued with the passage of the National Firearms Act that tagged it with the $200 tax that was five times more than the $37.50 purchase price. 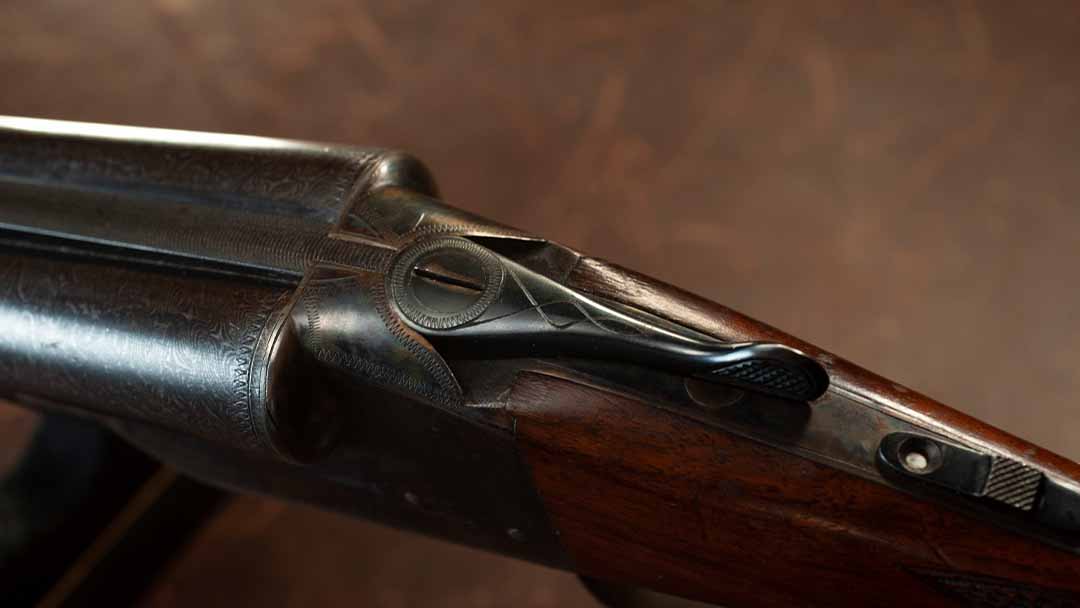 A view of the top of the receiver of Lot 2946, an Ithaca Auto & Burglar pistol.

The action of the Model A Auto & Burglar was based on Ithaca’s Flues shotgun, named after the designer of the gun’s action, Emil Flues. Gunmakers want to offer guns they say have as few moving parts as possible. The Flues had three with its lock: a sear, hammer with integral cocking arm, and a coil spring.

Ithaca proudly proclaimed the speed of the firing mechanism as 1/625 of a second as measured and recorded by the Cornell University Mechanical Engineering Department. In advertisements, the company explained the hammer only travels a half an inch, so it would “positively increase the score of any man at the traps or in the field.”

The Flues shotgun was also touted as having a stronger frame than its predecessors because the simpler lock mechanism meant that less milling was required. 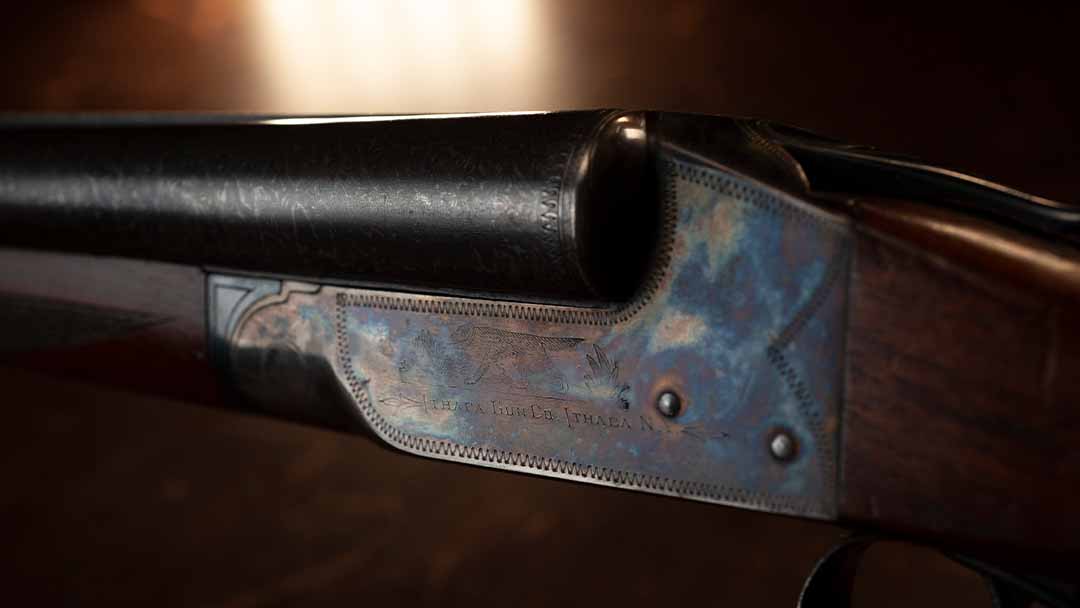 The Ithaca Flues shotgun is the base for the Auto & Burglar pistol. This shows the case hardening finish on the receiver of Lot 2954, a 16 gauge Flues in the Oct. 4-7 Sporting and Collector Auction.

Emil Flues was living in Michigan where a salesman from Ithaca Gun Company met him on a sales trip and convinced him to come to Ithaca as a gun designer. He was never listed in Ithaca’s city directory as an employee of the gun company, but was listed as an experimental gun maker, likely on a contract. 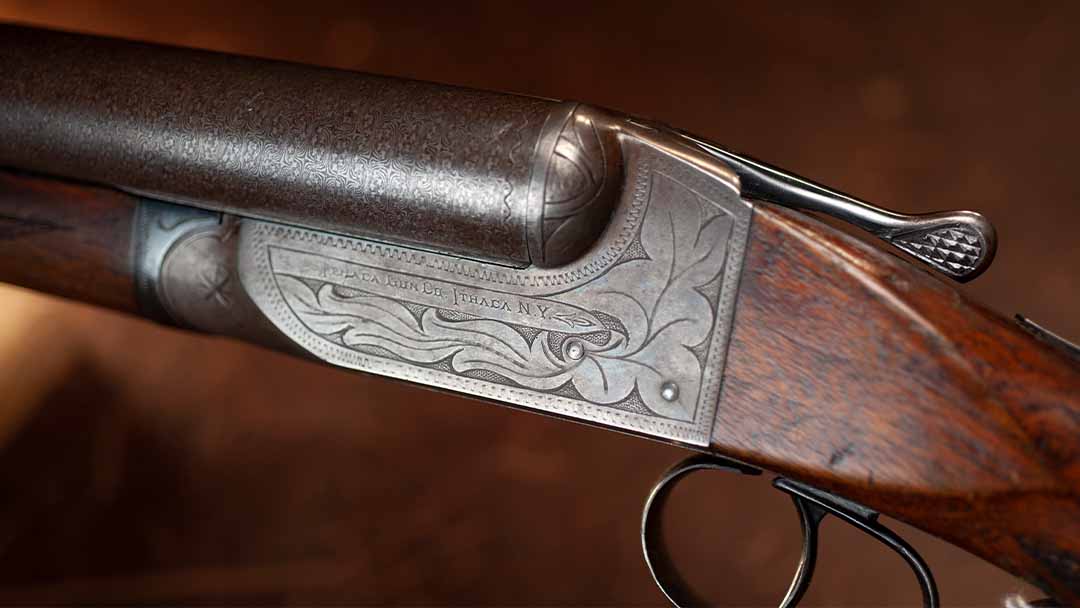 This 10 gauge Flues shotgun is Lot 4898 in Rock Island Auction Company’s Oct. 4-7 Sporting and Collector Auction. The Flues is the basis of Ithaca’s Auto & Burglar pistol.

Among the umbrella of definitions of the “any other weapon” designation in the National Firearms Act is any a pistol or revolver with a smooth bore design that fires a shotgun shell.

The Ithaca Auto & Burglar is listed as a specific example on the ATF website as well as the Harrington and Richardson Handy Gun because of their smooth bore. A pair of Harrington & Richardson Smooth Bore Handy Gun pistols are also on offer in the Sporting and Collector Auction. 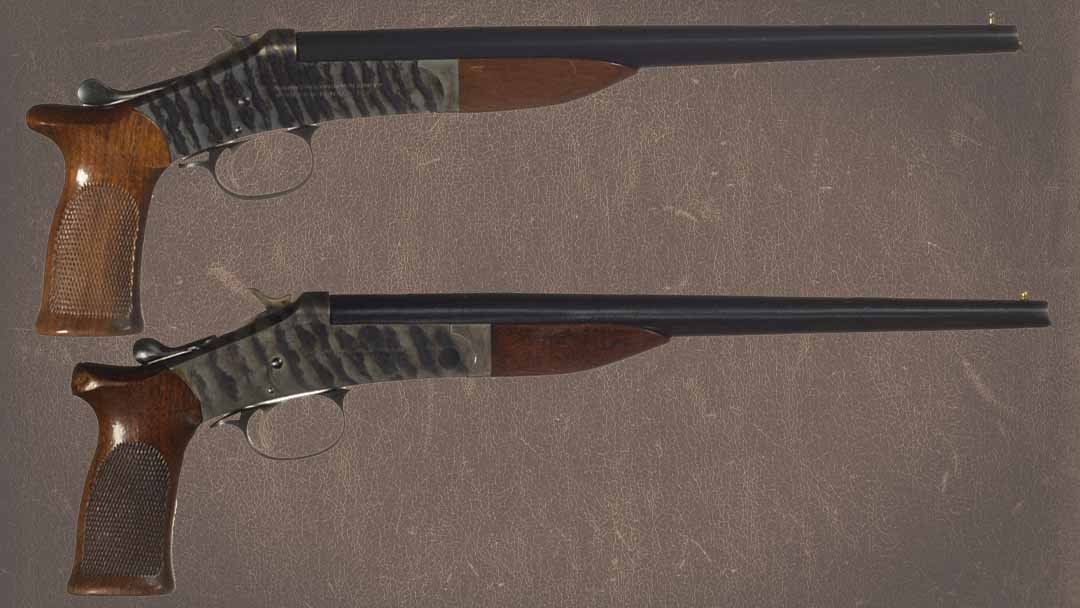 Like the Ithaca Auto & Burglar pistol, the Harrington & Richardson Handy Guns in Lot 2045 and 2050 are smoothbore pistols that are considered “Any Other Weapon” under the National Firearms Act of 1934.

An unusual gun designed for personal protection based on a double barrel shotgun, the Ithaca Auto & Burglar pistol is a gun desired by collectors and Rock Island Auction’s Oct. 4-7 Sporting and Collector Auction provides an opportunity to pounce on one. It and examples of the shotgun it was based on, the Ithaca Flues shotgun, and the Harrington and Richardson Handy pistol, that is also referred to by the ATF as an Any Other Weapon, are available in the auction. 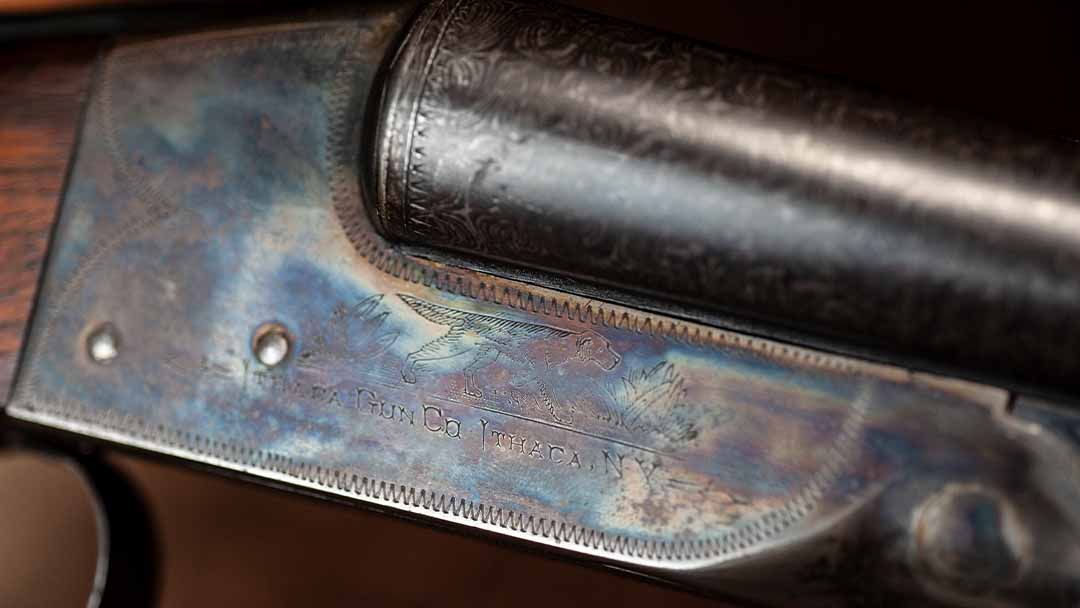 The Ithaca Gun Company ̶  From the Beginning, by Walter Claude Snyder 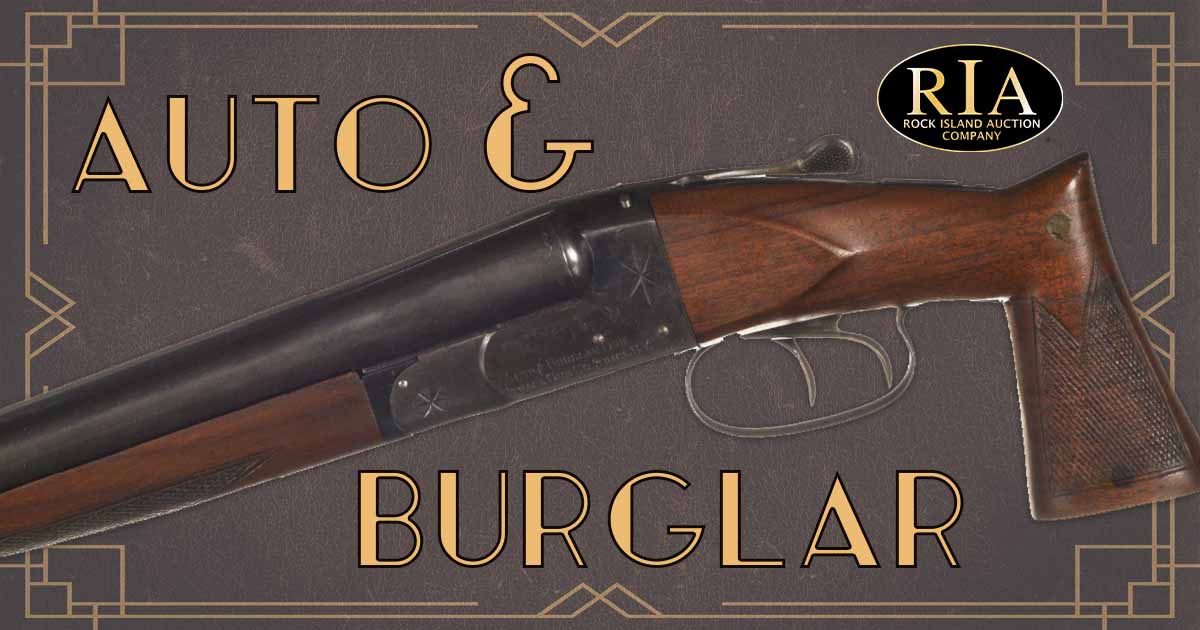