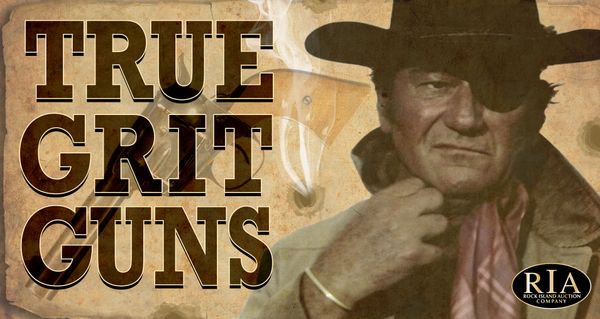 John Wayne was the quintessential American cowboy. With his distinct voice, imposing stature, and natural charisma, he was the perfect embodiment of the strong, manly hero archetype that dominated the Golden Age of Hollywood Westerns. And it goes without saying that no cowboy is complete without his six-shooter.

A statue of Wayne located at the John Wayne Airport in Orange County. The gun used for the sculpture is modeled from Wayne’s favorite Colt SAA revolver, which is up for auction this October.

John Wayne owned many Colt Single Action Army revolvers over his lifetime, the classic Hollywood Western sidearm, but the actor favored one particular revolver so much that he wore it in several well-known films toward the end of his career, including the legendary ‘True Grit.’ Now that same revolver is featured in Rock Island Auction Company’s October Sporting & Collector Firearms Auction.

Needless to say, a gun and holster owned by the iconic John Wayne would be a wish list piece for any Colt or Hollywood memorabilia collector. Both the revolver and included holster rig were used by Wayne in a classic trio of Westerns, ‘The Cowboys,’ ‘True Grit,’ and ‘Rooster Cogburn.’ The gun and holster were later given by Wayne to Gary Hess, an engineer for Wayne’s firm DECO, as a gift for helping save the actor’s business.

Serial no. 309795 was shipped on August 7, 1909, incorrectly listed as a Colt SA Bisley Model. The revolver was subsequently altered for John Wayne with a 4 3/4″ Bisley “quickdraw” barrel and a cylinder in .44 WCF. Other modifications included the mellow ivory-looking grips, replacement grip straps, and an oversized trigger guard customized for John Wayne’s large hands. Additionally, the two-piece grips, a Catalin plastic material meant to appear like ivory on camera, had finger grooves molded from Wayne’s hand to give the Duke a perfect finger hold.

The belt rig contains .44 WCF cartridges as well as a single .45-70 Springfield trapdoor cartridge which was carried by Wayne in tribute to the American soldiers of the Indian Wars. John Wayne wore both the revolver and the belt rig in numerous films and publicity photos, and both items have been displayed together at the John Wayne Theater in Knott’s Berry Farm. Copies of a 1976 appraisal of John Wayne’s gun collection list this SAA by serial number.

The Jan. 28, 1972 issue of Life magazine features Wayne in costume for “The Cowboys” wearing the holster rig with the SAA on the cover.

This specific Single Action Army, personally owned and frequently used by the legendary John Wayne, became his trademark sidearm. In his later Westerns, most of his duplicate film revolvers were modeled after this single favored gun, with similar ivory-looking handles and large trigger guards, though Wayne’s personal six-shooter did most of the shooting. The distinct revolver became so famous with Wayne’s fans that working replicas were produced, but the real gun can be owned by a lucky bidder this October, an important piece of Mr. America’s legacy.

“Courage is being scared to death, but saddling up anyway.”   –  John Wayne

John Wayne’s six-shooter was most famously used in 1969’s ‘True Grit,’ a film that won the Duke an Academy Award for Best Actor. Wayne steals the spotlight in his role as Deputy U.S. Marshal “Rooster” Cogburn, and his revolver is prominently used in a climatic four-on-one showdown. Though John Wayne’s Colt SAA is the only specific gun from the film up for bid this October, ‘True Grit’ featured a number of interesting firearm types that can be found at the upcoming auction.

From Colt Peacemakers to classic Winchesters, ‘True Grit’ includes an assortment of Old West firearms as varied and distinct as its unique cast. Some of the guns are more period-accurate than others, but almost all of the ‘True Grit’ guns seen on screen are real types of firearms that are highly collectible today, so let’s take a closer look at some of the most notable guns carried and fired in the 1969 film, the 2010 remake, and the Charles Portis novel that inspired both movies.

Though John Wayne calls her gun a Dragoon, Mattie Ross carries a cartridge-converted Colt-Walker in the 1969 version of ‘True Grit.”

If there’s one type of gun John Wayne can be associated with besides the classic Peacemaker, it would undoubtedly be the Winchester rifle. In ‘True Grit,’ the Duke wields a Winchester 1892 saddle ring carbine throughout the film, including his final charge against the villainous Ned Pepper and the Parmalee brothers. The ’92 Winchester carbine was likely chosen to allow Wayne to more effortlessly perform his impressive twirling and one-handed flip cocking technique.

John Wayne fires his Winchester ’92 during the climax of ‘True Grit.’

John Wayne’s nemesis, Ned Pepper, played by the famous Robert Duvall, also favored a Winchester rifle. Ned Pepper’s 1894 saddle ring carbine was manufactured several decades after the film’s historic setting, but filmmakers during the classic era of Westerns were often more concerned with factors such as reliability, ease of use for the actors, and how a gun appeared on screen, and the Winchester ’94 is unquestionably a great looking gun.

The 2010 version of ‘True Grit’ depicted more period-appropriate guns overall, including Jeff Bridges’ version of Rooster Cogburn packing a Winchester Model 1873 lever action rifle. Often hailed as “the Gun that won the West,” the Winchester ’73 is a popular antique gun with collectors and shooters today.

The Colt Dragoon plays a prominent role in both versions of ‘True Grit.’ As in the novel, Mattie Ross takes up her late father’s Dragoon revolver and pursues the murderous Tom Chaney. In the John Wayne film, a Colt Walker is used in place of a Dragoon, perhaps due to its more imposing size, but the 2010 remake sees Mattie toting an authentic Colt Second Model Dragoon.

Rooster Cogburn also packs a pair of holstered revolvers that fit over his saddle horn. Like Mattie’s father, Rooster is a Civil War vet, and the .44 caliber Dragoon was a valued sidearm throughout the conflict, popular with both military and civilians for its power, reliability, and the ability to be carried in a belt holster. Today, original Colt Dragoon revolvers are a sought after collector’s gun.

The novel refers to these guns as 2nd Model Colt Dragoons as well, despite Rooster calling them “Navy sixes” in the film, a likely reference to the Colt 1851 Navy revolver, or a Confederate copy like the Griswold. Reins in his teeth, he brandishes both revolvers akimbo style when charging Ned Pepper’s gang in the faithful 2010 remake by the Coen brothers.

“Why, by God, girl, that’s a Colt’s Dragoon! You’re no bigger than a corn nubbin, what’re you doing with all this pistol?”   –  John Wayne, ‘True Grit’

Tom Chaney, the main antagonist in both films, carries the distinctive New Haven Arms Co. Henry repeating rifle tied to his back in a makeshift sling. “That damned Yankee rifle that can be loaded on Sunday and fired all week” was one of the most advanced firearms of the Civil War, and it saw its fair share of use from settlers and Native Americans alike in the decades to follow.

The Henry was the predecessor to the Winchester 1866 repeating rifle, which ‘Lucky’ Ned Pepper wields in the ‘True Grit’ remake. Dubbed the ‘Yellowboy’ for its receiver composed of a bronze/brass alloy called gunmetal, the Model 66 is often hailed as “the first cowboy rifle,” and is also the first rifle to bear the fabled Winchester name.

The Model 66’s side-loading gate quickened and simplified loading, and the rifle’s comparatively lightweight design made it convenient to store in a saddle-side scabbard, all traits Ned Pepper relies on during his final showdown with Rooster Cogburn.

In both film adaptations of ‘True Grit,’ Ned Pepper totes a wheel gun. Pepper’s sidearm of choice in the John Wayne version is a Colt New Service revolver that appears to be modified to look similar to a Single Action Army. Despite not being period-appropriate, New Service revolvers weren’t uncommon in Westerns of the era, as double action revolvers looked better on film for fast paced shootouts.

In the 2010 movie, Ned Pepper brandishes a more historically accurate Remington 1875 revolver. The Remington Model 1875 Single Action Army has a distinctive web on the underside of the ejector housing and a factory lanyard loop on the butt that makes it stand out from its more famous Colt contemporaries. Though not Remington’s first cartridge revolver, the Model 1875 was created as a direct competitor to Colt SAA and found some success before production ceased in 1889.

“Well, Rooster, I’m shot to pieces. Seems as though neither of us is to see Judge Parker.”   –  Ned Pepper, ‘True Grit’

With the notable exception of “Quigley Down Under,” the 1969 adaptation of ‘True Grit’ arguably did more to popularize the Sharps Rifle than any other film. Glenn Campbell’s character, Texas Ranger La Boeuf, touts both his own marksman talent and the impressive long-distance capability of his Sharps 1874 carbine, and John Wayne retorts “I have no doubt that the gun is sound.”

La Boeuf proves to be a competent, if sometimes inconsistent shot, and his confidence in the rifle falls in line with the weapon’s historical reputation. The Sharps Model 1874, known on the frontier as “Old Reliable,” traces its lineage back to Christian Sharps’ patent in 1848 for a breech loading rifle. It is similar to the Sharps New Model 1859, 1863, and 1865 rifles and carbines used during the Civil War, though the Sharps carbine in ‘True Grit’ has been adapted with centerfire metallic cartridges.

The various Sharps rifle and carbine models manufactured from the Antebellum Era through the late-19th century are some of the most iconic firearms of the American frontier. Authentic Sharps rifles can be found at auction in a range of models and price points, and they remain popular with hunters, target shooters, and collectors today.

Rock Island Auction Company frequently plays host to some of history’s greatest guns. As a gun owned and customized specifically for Hollywood’s most famous Western star and fired on-screen during the role that won him an Oscar, John Wayne’s revolver checks all the right boxes when it comes to top-tier gun collecting. ‘True Grit’ features many amazing guns, but the Duke’s personal six-shooter is unquestionably a must-have for rare firearm collectors, John Wayne fans, and anyone interested in owning an iconic piece of Hollywood history.

From vintage Old West wheel guns to modern classics in the making like the Colt Python, October’s auction is absolutely smoking with selection. Whether you’re interested in guns with some battle scars or wish list weapons like a black powder revolver belonging to Gene Autry, another silver screen Western legend, October’s auction features firearms for every level of gun collecting.

A revolver once belonging to “The Singing Cowboy,” Gene Autry himself!

Rock Island Auction Company’s October Sporting & Collector Firearms Auction offers thousands of firearms from across the globe. Elite collections are featured, including over 400 military arms from the phenomenal George Moller Collection, and everything can be examined firsthand when the Rock Island Auction Company Preview Hall opens for exhibition on Tuesday, October 3rd at 10 a.m. We can’t wait to see you here!

As always, if there are any questions regarding consignment, registration, or future auctions, please contact Rock Island Auction Company today. Our upcoming auction schedule is updated frequently on our website, so be sure to go through the listing and start making your plans to visit. All our events adhere to the latest COVID-19 guidelines and restrictions.