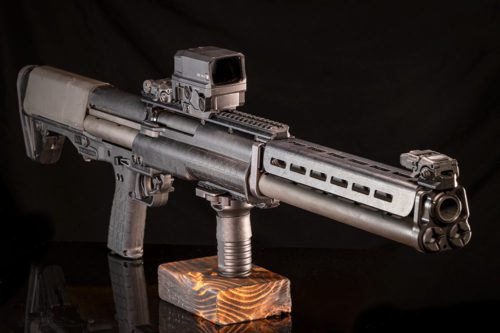 U.S.A. -(AmmoLand.com)- If you’re familiar with the original KSG shotgun, the KSG-25 is like someone took that gun, and used Photoshop to stretch the hell out of the front of it – resulting in 12 more inches of barrel and ten additional rounds. This brings the capacity of the KSG-25 up to – you guessed it – 24+1 rounds. In other words, the extendo Kel-tec holds an entire box of shotshells, because America!

Yes, this premise seems ludicrous on paper, but in practice is awesome if heavy. But how does the whole thing work? Read on and find out.

Despite its appearance, the KSG-25 is neither semi-automatic nor capable of firing plasma bursts. Instead, Kel-Tec took the venerable pump-action, tube-fed shotgun and rearranged the internals to better fit the average shooter. But unlike the overwhelming majority of pump-action shotguns in existence, the KSG series of shotguns utilize two parallel magazine tubes to increase capacity without needlessly increasing the overall length of the gun. Though obviously, with the KSG-25, this balance is somewhat negated, but given its capacity, is still very useful.

Speaking of capacity, the way the KSG-25 delivers all those rounds to the chamber is pretty interesting. It features two independent magazine tubes that don’t automatically toggle over when one is empty. This might seem like a design shortcoming at first glance, but it allows shooters to fill each with different loads and switch between them at will. And while it’s true that each tube holds 12 rounds, this number decreases to 10 shells each when using longer three-inch rounds. But there’s a ton of features on this massive scatter-gun, so let’s delve in and get the full rundown.

Starting at the muzzle, the KSG-25 sports a massive 30-inch cylinder barrel that can accommodate chokes, and there are even aftermarket screw-in muzzle brakes available! Above the muzzle, the KSG features a folding polymer front sight that is high enough above the muzzle to allow a shooter to get a proper cheek weld when shooting.

Just behind the front sight, the KSG-25 features three sets of M-Lok slots integrated into a heat shield that allows for mounting lights or lasers. Behind and beneath the heat shield, the KSG features a polymer forearm with an integral Picatinny rail for mounting lights, lasers or a foregrip. Personally, the gun feels wrong without a vertical grip. But be warned – like all full-power manually-operated shotguns, a vertical grip acts at the first point of contact for the recoil impulse, so your support hand will bear the brunt of each shot. When I initially installed an old-school KAC vertical grip the recoil was punishing enough to make shooting 00 buck pretty uncomfortable. So I instead opted for the LaRue Tactical FUG grip with a neoprene soft band installed to soak up some of that recoil.

Above the pump, the KSG-25 features a Picatinny rail for mounting optics or the factory rear folding aperture rear sight. I tried a few different optics out and found that holo sights like the EoTech EXPS3 or the Vortex UH-1, make rapid target engagement a breeze since these optics allow a shooter to keep their eye on the target. And over the course of firing a few hundred rounds of ammo, the rail held perfectly and never caused the optic to lose zero.

Beneath the optics rail, the KSG-25 is very much a Kel-Tec design. The pistol grip features the iconic molded pattern shared by all Kel-Tec firearms and utilizes a cross-bolt safety easily accessible with the firing hand. One nice thing about its position is that it’s difficult to accidentally engage or disengage and never (at least in my experience) rubbed against my shooting grip even during the potent recoil impulse of full-power buckshot.

Around the trigger guard, the Kel-Tec features an ambidextrous pump release that in testing was very easy to use when needed, and like the safety never got in the way of running the shotgun. So what about the KSG-25’s ergonomics was awkward?

Like nearly all bullpups, proficiently reloading the KSG requires practice and training. But, since the KSG’s magazine tubes must be loaded individually and under the shooter’s armpit (and in one of two parallel loading ports) while the gun is much more front-heavy than the original KSG, doing so is tricky at best. In fact, it would be a nightmare to load this firearm under stress in low-light conditions without hours of practice.

The good news is that with a capacity of 25 rounds, you won’t need to reload under stress. Since no threat on planet Earth short of a Japanese bonsai charge or velociraptor ambush would require more than 25-rounds of 00 buck to stop.

As a first gun or home defense weapon? ehhhh… I guess?

OK, it’s a great firearm that in my testing encountered no malfunctions across 300 rounds fired. The ergonomics are mostly solid, and the mechanics of the gun a very good. But it’s just so damn big! Maybe I’m just a manlet at a whopping 5’9″, but the Kel-Tec KSG is just a little too hefty for me to comfortably shoot for long durations. But I will 100 percent give Kel-Tec props for making such an out-of-this-world design. It’s very cool, but if I need a bullpup shotgun for home defense, I’ll stick to the original KSG for now.