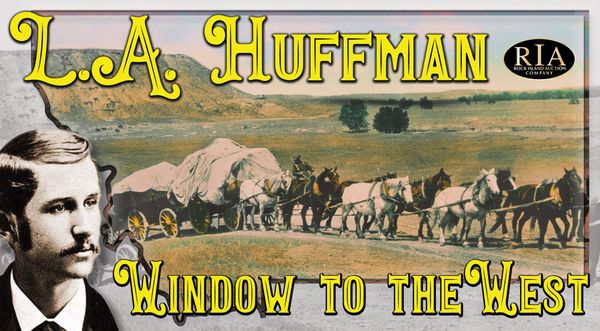 Laton Alton Huffman’s photography captured the spirit of the Old West and a changing way of life during the last two decades of the American frontier. Through portraits of the people, wildlife, landscapes, and industry of late 19th century Montana Territory, Huffman documented an authentic vision of the West that few of his contemporaries equaled.

Much of what we associate with the Old West today also unfolded in Montana Territory. From armed hostilities between Native Americans and settlers, the beginning of reservation life, to the decline of the American bison and the cattle barons that rose in their place, L.A. Huffman was out on the range with his camera capturing it all.

Huffman’s photographs merge high artistry with an eye for historic detail, shying away from sanitized studio portraits in favor of real people against real landscapes and dynamic shots of cattle drives and buffalo hunts. His camera saw America as it was, rolling back the myth and glamor and presenting a genuine portrait of the vast and ever-changing Montana frontier.

“For sheer versatility of significant and historic subject matter close to the range of the grass, Huffman’s collection surpasses them all.”     –  J. Evetts Haley

25-year-old Iowa native L.A. Huffman arrived in the Montana Territory in 1879 and became the photographer at Fort Keogh, a military post near Miles City that was established after the Battle of Little Bighorn in 1876. This position would turn into a lifelong career for Huffman, who’d first learned the craft of photography from his father.

From his modest studio in Fort Keogh, Huffman set out to document life in the American West. One of his earliest and most dramatic photos depicts the camp of Spotted Eagle, a fierce Lakota chief who’d led a band of warriors during the Battle of the Little Big Horn only a few years prior.

Print of Spotted Eagle’s Sioux Village, an especially historic L.A. Huffman photograph where hides are still used to cover the Lakota teepees before the later canvas provided by the U.S. government.

Little Bighorn was a fleeting victory for the Plains Indians, as thousands of American settlers flooded West on the ever-expanding railroad, which arrived in Miles City in 1881. A year after Huffman photographed Spotted Eagle and his settlement along the Tongue River, the Lakota warrior formerly surrendered to the United States, and Huffman would continue to document the transition into reservation life that followed.

Hand-coloring black and white prints was a popular practice before color photography became available to the public in the late 1930s. In Huffman’s era, the process involved brushing thin layers of color pigments mixed with gum arabic onto select sections of the image, such as tinting the sky and landscape, or coloring a subject’s hair and clothing.

L.A. Huffman spent much of his later years enlarging and hand-coloring his earlier photographs using watercolor tinting. Color prints, especially images of America’s western frontier, were often viewed as more desirable than their black and white counterparts, but the time-consuming hand-tinting process made colorized prints a more expensive rarity.

L.A. Huffman print of Cheyenne Chief Two Moons on the sight of the Little Bighorn battlefield, showing the thick card stock stencils used to apply watercolor tinting to select sections of the prints.

Huffman employed a combination of hand-tinting and hand-sketched texture in some of his famous prints, giving the portraits and landscapes a unique and slightly ethereal appearance. L.A. Huffman’s classic western imagery is well-suited to the technique, the majestic mountains and rolling prairies of Montana’s “Big Sky Country” often taking on the look of a painting when colorized by Huffman’s rich palette

“CK Rangers at Waterhole”, a 1900 dated print by L.A. Huffman. The colorization is subtle yet changes the mood dramatically.

The Native Peoples of Montana

Huffman became well-acquainted with the Native peoples of Montana, photographing prominent Cheyenne figures like Two Moons and Young Plenty Bird, and Lakota chiefs such as Spotted Eagle and Rain-in-the-Face. While some of his portraits were taken when the Native Americans visited Fort Keogh, Huffman was no stranger to location shoots, often strapping his equipment and 50-pound homemade camera to his horse and riding out to a far-flung village to capture his famous photos.

The thousands of farmers and ranchers migrating to eastern Montana in the 1880s would dramatically alter the landscape, and Huffman had the forethought to focus much of his early career on the native peoples of the northern plains and the sheer vastness of the unfenced prairie they’d called home for millennia. The Native American hunting grounds and sacred sites were encroached on by the ranching and mining industries, and life in the American West was about to change forever.

“One of the Few Earth Lodges” by L.A. Huffman, the home of an early settler to Montana Territory.

No animal represents the Old West better than the American Bison, and perhaps nothing represents the end of the frontier more dramatically than the slaughter of the great bison herds. L.A. Huffman was among the few western photographers who documented the remaining bison as their numbers rapidly dwindled from overhunting.

“Buffalo Grazing the Big Open” is an 1880 colorized print by L.A. Huffman.

Huffman’s photos of bison roaming the open plains of Northern Montana are some of his most historically significant works, and his images of bison being shot and skinned are among the few examples around. By the 1880, bison herds had already dwindled from 60 million in the previous century down to fewer than 40,000, and by decade’s end only around 540 American Bison remained in the wild.

Huffman participated in several bison hunts in the early 1880s, though later in life he became closely associated with wildlife conservation and befriended William T. Hornaday, founder of the American Bison Society. Watching the destruction of the great bison herds surely had an impact on Huffman, and it’s no stretch to think some of his famous photographs of the majestic animals against the breathtaking Montana landscape in turn helped influence public support for the conservation efforts in Teddy Roosevelt’s Progressive Era.

The Cowboys of Montana

Montana, the land of rolling hills and shining mountains, is a perfect backdrop for portraits of cowboys and cattle round-ups, so it’s no surprise that so much of Huffman’s work is related to ranching life. Huffman had previous experience as a rancher, and it’s evident in his photography that he knew how to choose the right time and place to capture a perfect image of the action.

Huffman’s portraits of cattle drives, wild horses, and daily life out on the range are rare glimpses of the real American West. The talented photographer documented the brief but legendary period of open range ranching in its entirety, and with it some of the most iconic photographs of the American Cowboy ever captured.

L.A. Huffman befriended a number of wealthy ranchers in and around Miles City, from cattle kings like Conrad Kohrs to Montana’s political father Granville Stuart himself. By all accounts, Huffman was well-liked and accepted by the frontier leaders of the territory, a clear advantage for a traveling photographer, and in 1893 he was elected to the Montana House of Representatives for Custer County.

L.A. Huffman married in 1883 and started a family. Though he would leave Montana several times in the years to follow, including a brief relocation to Chicago, Huffman missed the frontier and was always drawn back to Miles City and the Land of Shining Mountains.

After his time in politics, Huffman focused less on travel and more on producing prints from his extensive collection of glass plate negatives. Though less prolific in his later years, Huffman continued to produce new photos throughout his five decade career. Montana had become known as “The Treasure State” for its rich mines and oil fields, and Huffman documented the region’s rapid expansion and the evolving ranching industry.

“Glenarrow Jan 1926,” an L.A. Huffman print of a Montana ranch in the winter.

Huffman lived to see the tremendous changes America undertook as the Wild West was settled and the engine of early 20th century industry ushered in the Technological Revolution. Still, the spirit of the frontier endured in Montana, and Huffman’s home of Miles City gave him an ideal window into the last remnants of the Old West that still attract photographers to Big Sky Country today.

Colt First Generation SAA owned by Miles City Police Chief Martin Golden, one of L.A. Huffman’s contemporaries, and a throwback to an earlier era of Old West Sheriff. From the John Fox Collection.

Laton Alton Huffman wasn’t just an Old West photographer, he was an active participant in settling the frontier. He photographed a rugged country using crude equipment even by the standards of the era, carrying the delicate chemicals and glass plates with him on horseback in order to capture the most authentic images possible.

Print of “A Buffalo Family” by L.A. Huffman.

In 1976, L.A. Huffman was inducted into the National Cowboy & Western Heritage Museum’s Hall of Great Westerners, the only photographer ever bestowed the honor. Cited as a “Celebration of the American West,” Huffman’s work gives us a candid window into the culture of the Plains Indians, the great bison herds, and the cowboys who once roamed the vast open range.

More than a Gun Auction

As the world’s number one firearms auction house, it’s no surprise that guns and militaria make up the large majority of items for sale during Rock Island Auction Company’s numerous auction events. A sizable number of historic art pieces are offered as well, including authentic Old West artifacts and rare relics of the American frontier.

September’s 10-12 Premier Firearms Auction features historic objects from around the world. Ranging from Wild West display boards to Texas Ranger badges to the golden treasures of the Montana Cattle Barons, there are hundreds of museum-worthy items available. There’s nothing better than owning a physical piece of history, and there’s no better time to invest in a timeless treasure that will retain its value for generations to come.