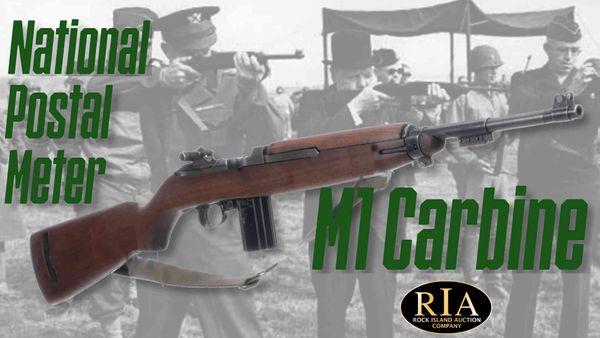 In 1942, as the shock of Pearl Harbor wore off, the war effort in the United States ramped up. There was a need for everything – especially weapons. The U.S. military needed more than 1 million carbines by the end of 1943.

Companies that didn’t make weapons started making them. A company in Rochester, N.Y., that made metered mailing machines, postal scales, and letter-handling equipment, was one of them. The U.S. National Postal Meter company didn’t have the equipment, factory, or workers to produce a light, short-barrel rifle when it was awarded a contract, but it managed to produce 413,017 M1 carbines from 1942 to 1944.

A U.S. National Postal Meter M1 is in the Feb. 16-18 Sporting and Collector Auction. The company was one of 10 contractors who made the M1 Carbine.

An M1 Carbine made by U.S. National Postal Meter Company is part of Lot 4601 in the Feb. 16-18 Sporting and Collector Auction.

The United States military had the semi-automatic M1 Garand rifle but there was a realization that something between a rifle and pistol was needed. The U.S. Army hadn’t had a carbine in use in 44 years. The call went out for a light rifle in 1938. The search for a carbine — with a requirement that the gun weigh less than five pounds — began in June, 1940, just 18 months before the attack on Pearl Harbor.

The gun’s design was in part created by David Marshall “Carbine” Williams when he was an inmate in a North Carolina prison serving a murder sentence. Fourteen of his patents were used in the gun’s design.

David Marshall “Carbine” Williams (in the cowboy hat), who was instrumental in the invention of the M1 carbine, and Gen. Douglas MacArthur.

The carbine’s design wasn’t adopted until October, 1941, when the early requirement was for 886,698 M1 carbines. That changed when the United States entered World War II. The War Munitions Program drafted in February, 1942 made the need for carbines far more urgent.

Winchester, heavily involved in the carbine’s design, and Inland Manufacturing, a division of General Motors, were given the initial contracts to produce the guns but were unable to meet the suddenly increased demand.

National Postal Meter’s carbines were made with parts mostly manufactured by other companies. Among these were New Haven Clock Company, National Lock Company, and Trimble Nurseryland Furniture Company, located about 6.5 miles away from National Postal in Rochester, that made baby furniture.

Rochester is home to companies like Eastman-Kodak and Bausch + Lomb, and by some estimates manufactured as much as 75 percent of the optical equipment used by the U.S. Navy and U.S. Army during the war. The Folmer-Graflex camera Joe Rosenthal used to snap the picture of the U.S. Marines raising the flag atop Mount Suribachi on Iwo Jima was made in Rochester. By war’s end, Rochester companies had received about $1.2 billion in military orders.

Raising of the flag atop Mount Suribachi on Iwo Jima.

When the war started, Rochester mobilized. Industrial employment doubled, infused with students, minorities, and especially women. The number of women working in Rochester grew from 25,000 to 48,000 by war’s end. That included National Postal Meter.

The company newsletter, Metered Impressions, while leading with news of guns, ammunition, and production times, also featured employees, splitting them between men and women. An article from the Rochester Democrat & Chronicle from January, 2018 noted women featured included a mother of six, one of whom served in the navy, a hairdresser, and a mother of three young children.

A soldier props his M1 carbine against a fence post during a break.

But what about the company and their guns, you ask?

The company received a contract to manufacture M1 carbines in April, 1942. It obtained a former automobile showroom and repair shop and drew supervisory and engineering personnel from across the country. National Postal Meter laid out a production line and did preliminary engineering and production. Each company had to provide 10 guns for production tests that included physical inspection along with accuracy, endurance, dust, mud, and rain.

The test guns were received as dirty, according to reports, with carbon present on the bolt and extractor and traces of light rust on the magazine catch spring on three of the guns. That said, their accuracy was satisfactory and endurance was excellent.

The guns stood up well to excessive dust but were inoperative in excessive mud. They did well in a rain test and didn’t “freeze.” The National Postal Meter carbine stood up to rain better than any other company’s carbine tested up to that time. It was recommended for further study to determine why they did so well in the rain but no results were reported.

The first lot of 1,000 was delivered the following month. The company reached its maximum production level of 45,500 carbines per month in December, 1943. The guns were made with barrels produced by Underwood and the stock assembly and hand guard manufactured by Trimble.

When the company took on the contract, it was determined that National Postal Meter would make only the receiver, the operating slide, the bolt, and the trigger housing. The government furnished the barrels (mostly made by Underwood) and subcontracted out the other parts – hence, Trimble Nurseryland’s involvement in the war effort.

IBM, also from Rochester, made the gun’s extractor, while eight other Rochester companies were among the 20 companies that produced parts for the National Postal Meter carbine. The Todd Company, a maker of protectographs – or checkwriters – was responsible for nine smaller parts.

In total, GM’s Inland Manufacturing produced 2.6 million M1 carbines during the war and Winchester made more than 800,000. National Postal Meter’s 413,017 carbines ranked fifth among the 10 companies contracted to make them during the war. Hollywood had plenty of material to tell the story of the M1 Carbine’s role in both the Pacific and European theaters in World War II, as well as in later conflicts, and Carbine Williams’ story, too.

If you’re interested in a part of World War II history with a touch of homefront necessity, an M1 carbine made by a company that initially produced mailroom equipment is a good example of America flexing its industrial might. The National Postal Meter M1 Carbine is available in the Feb. 16-18 Sporting and Collectors Auction.