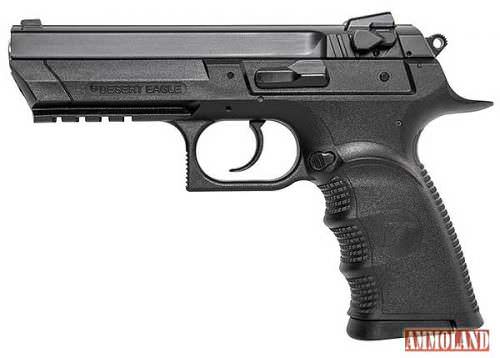 United States -(AmmoLand.com)- Contrary to popular opinion, the Magnum Research Baby Eagle III Pistol is not a scaled-down Desert Eagle. It is actually a modified version of the Israeli Jericho 941.

The Jericho was designed in the late 1980s by Israeli Military Industries as a sidearm for the Israeli Defense Forces to replace the CZ-75.

Often referred to as a CZ-75 clone, original pistols were made with parts sourced from Italy by way of Tanfoglio. Perhaps the biggest change to the design was the use of the 41 Action Express (AE) caliber conversion and polygonal rifling as opposed to traditional lands and grooves.

The 41 AE is dimensionally similar to the 40 S&W round, but the cartridge made use of a rebated rim allowing it to easily chamber in a 9mm platform by means of a barrel and recoil spring change. The pistols were imported into the United States by a variety of companies such as KBI, Mossberg, and later Magnum Research. Magnum Research changed the slide profile to make it similar to the Desert Eagle and called the pistol the Baby Eagle.

Magnum Research has since disposed of the 41 AE conversions and now offers the pistol in 9mm, 40 S&W, and 45 ACP. With the adoption of 40 S&W by the American shooting public soon after, the other importers ditched it, too.

We used the Jericho extensively while working in Guatemala almost two decades ago. We were reluctant at first, but soon warmed up to the pistol and have been a fan of the design ever since.

The Baby Desert Eagle III is a sleeker design than its predecessors, it actually looks a bit more like a scaled-down Desert Eagle if that is possible. We received a polymer frame version to review. Yes, the frame has finger grooves, but unlike some manufacturers who make grooved frames, it fits ours just about perfectly. The beavertail and high cut to the rear of the frame are extremely well done.

We appreciated the lighter weight as the original 941s had a bit more mass or so it seemed than the typical metal-framed handguns of their day.

Yes, there is a rail on the pistol for the mounting of lasers and lights, too.

Out of the box, we noticed that the barrel was a match-grade traditional land and groove type as opposed to the polygonal rifling found in the original Jericho. The caliber was 40 S&Wand knowing that the original pistol was based on the more powerful 41 AE in its infancy.

Despite what modern loading manuals tell you with regard to using 40 S&W data when hand loading the 41 AE, the original caliber was much stouter and loaded to higher pressure.

The slide-mounted de-cocker is ambidextrous and teardrop-shaped. The magazine release is reversible for righties and southpaws. The trigger is a double/single-action (DA/SA) type with a 12 lb. trigger pull (DA), or 4 lb. for a single action. Some folks hate this combination with a long or heavy trigger pull for the first shot and a lighter pull following thereafter. It makes more sense when you consider the Israelis carry hammer down on an empty chamber and need to rack the slide in order to get it into battery. With this type of pistol, we get around that by cocking the hammer on the draw.

Freedom Munitions hooked us up with some 40 S&W ammo and we headed out to the range to try out this new blaster.

On the range, the pistol shot well, with none of the snappiness found in most ’40s. Trying it all single-action gave us respectable hits in the ten-ring. It almost felt like shooting a high-end single-action pistol in this regard.

For the sake of a more thorough test we tried it from the de-cocked position several times and we hit a bit too high every time.

That heavy DA pull is smooth, but we did not like it.

It’s one thing if you de-cock your pistol only to have a threat become active and need to follow up with fire on target (adrenaline will probably keep you from noticing). It is quite another having to do that from the draw without manually cocking the hammer and we never like the idea of carrying with an empty chamber. If we had one thing to change it would be either reducing that double-action pull to something closer in range to the single-action range or giving a “cocked and locked” option.

It is worth mentioning that shooters new to the CZ platform may have problems racking the slide because it rides inside the frame. The Baby Desert Eagle gives you a bit more purchase due to their rear slide serrations and the slide-mounted decocking lever. We are used to it but know that it will be problematic for some without practice.

Our only other issue was one of branding.

The pistol is marked “Desert Eagle”. When we think of a Desert Eagle we think of our hard chromed 44 Magnum, not a polymer-framed 40 S&W. Perhaps Magnum Research did not want to put “Baby” on it as some halfwit might think they are marketing pistols to toddlers. It is probably better than the company that branded their imports as “Uzi” and then found out that “Uzi pistol” was banned by name in some of the non-free states.

At the end of the day, it is their pistol and they can call it what they want, we just think it may cause confusion down the road.

While I always wanted a Baby Eagle that was a downsized version of my 44 Desert Eagle with regard to a metal frame and a hard chrome finish, this pistol packed really good ergonomics and would make for a good concealed carry or home defense piece.

Admittedly, the Magnum Research Baby Eagle III Pistol was much more pleasant to shoot in single-action mode and we can work around the heavy DA first shot, but many new shooters may not be able to do so. This is a design you really have to want or are completely familiar with in order to enjoy it. Some folks are not bothered by the two different pulls like that at all or look at it like a silencer shooter would look at “first round pop”.

There is even a school of thought that holds that this is a good condition for most people with minimal training: having to overcome that heavy pull in lieu of a manual safety and adrenaline in a self-defense situation making it immaterial.

It all comes down to the individual shooter. If that feature works with your lifestyle and skillset, we say go for it. That is the outlook you need to take with any handgun.

Apart from that, the only other change we would like to see would be this pistol offered in either 10mm ammo or the 357 SIG round. If you are going to put Desert eagle on the side of your pistol, let’s get some pseudo-magnum-powered chamberings.

Mike Searson’s career as a shooter began as a Marine Rifleman at age 17. He has worked in the firearms industry his entire adult life as a Gunsmith, Ballistician, Consultant, Salesman, Author and was first certified to teach firearms safety in 1989.

Mike has written over 2000 articles for a number of magazines, websites, and newsletters including Blade, RECOIL, OFF-GRID, Tactical Officer, SWAT, Tactical World, Gun Digest, Examiner.com and the US Concealed Carry Association as well as AmmoLand Shooting Sports News.