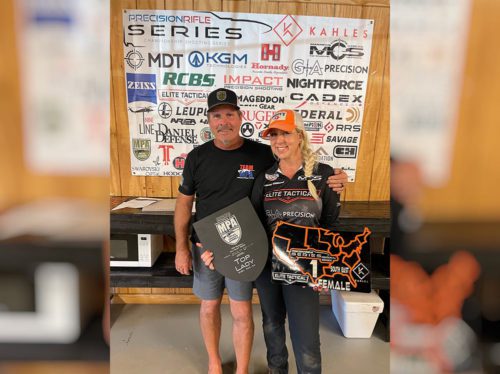 U.S.A. -(AmmoLand.com)- Bushnell, an industry leader in performance optics, along with RCBS and Hoppe’s, is celebrating pro shooter Melissa Gilliland’s strong finish at the PRS Southeastern Regional Finale, which took place at the Arena Training Facility in Blakely, Georgia.

Gilliland finished the match as Top Lady and 20th overall at the Finale. Her strong finish at the match combined with multiple top placements throughout the season also earned her Top Lady and 14th overall for this year’s Southeastern Regional Series. During the match, Gilliland used the new Bushnell Elite Tactical DMR3 scope with G4P reticle and relied on her RCBS reloading equipment and Hoppe’s gun care to see her through the finale.

“This new glass from Elite Tactical was designed with a lot of team member input, and it shows,” Gilliland said. “The improved reticle, the quick 0.04-mil floating center dot, the wide eye box on every magnification level…attention to details like these make the difference in PRS competition. They definitely made the difference for me this week!”

Gilliland continued, “When it comes to my reloading needs, RCBS is the only brand I trust. With the new ChargeMaster Supreme andLink dispenser, I know that every load will be consistent from start to finish and that’s the accuracy you just can’t match.”

With her qualifying finish at the Southeastern Regional Finale, Gilliland will be heading to the PRS Pro Series Finale, which takes place November 6 in Raton, New Mexico.

“It has been an awesome season and I’ve really enjoyed all of the matches that I have shot as part of the Southeastern Regional Series,” Gilliland said. “I’m looking forward to competing in the PRS Finale next month and I can’t thank my sponsors enough for all of their support. My gear is second to none and I hope to be able to end the season on a high note.”

RCBS has dedicated itself to the craft of reloading ammunition since it was founded in 1943. RCBS started with one simple bullet die and has grown into the leading manufacturer of reloading equipment for rifles and pistols. Reloading is an exact process with tight tolerances. It requires precision and skill to be done correctly. That’s why RCBS makes state-of-the-art products – everything from presses, dies, shell holders, powder measures, and priming products. All are backed by RCBS’s industry-leading reputation to give you a premium reloading experience. RCBS: Precisioneered Reloading.