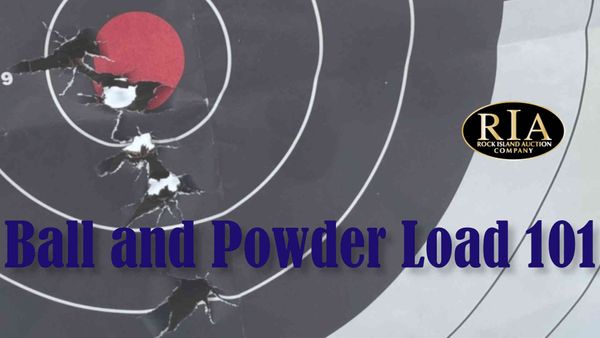 For reasons that have never really been all that clear to me, you can take two .50 caliber muzzleloading rifles with barrels the same length, the same rate of twist, same sights, etc. from the same factory and find that they will shoot slightly better with different loads.

Though many of us all too often load up whatever ammo we are lucky enough to find these days for our breech loading firearms, all firearms will perform better if you take the time to figure out what ammunition actually works best in your particular firearms. That is true whether you are shooting rifles, handguns, or shotguns, and it is definitely true when it comes to muzzleloading firearms.

So what do you do? To start off, get out and shoot! If firing a rifle, shooting from a rest will help limit the amount of shooter error involved in the groups.

The author fires off a shot as he tries to determine the best powder load for his muzzleloading pistol.

While some people are adamant you need a particular target to shoot at when developing a load, all you really need is a mark and to maintain the same distance to the target while you develop the load. Using targets the same size for each group is ideal since it makes them easier to judge. If you keep the range the same and use the same point of aim for each shot in a group, you can measure the spread no matter what target you use.

If you want to be really frugal, your target can be as simple as a cardboard box with a spray-painted circle or a taped `X’ in the middle. I generally prefer to use something like a 25-yard pistol target when figuring out what shoots best for my firearms since it gives me a familiar and clearer target to aim at with each shot.

All the tools to determine the best powder load to use with your muzzleloader.

Pick a fairly standard load for the caliber you are shooting, say a .490 ball, .018 patch, and 65 grains of 2f black powder for a .50 caliber flintlock rifle. Then see how it shoots. If the results of the initial load aren’t up to your standards, experiment with different combinations keeping in mind the safe limits for any given firearm.

Change one thing at a time. You don’t want to change multiple variables at once since you won’t know what improved or worsened your results. Other than making sure your sights are centered, do not file or alter your sights until you have a load that is producing good groups. You can then adjust the sights to bring the group to center. Keep track of what worked and what hasn’t by saving targets, using a logbook or notepad, etc. This definitely helps the process, especially if there might be long periods between sessions at the range.

I knew both the pistol and myself could perform better with an ideal load than this first group using .445 round balls, .018 pillow ticking patches, and 25 grains of 3fx GOEX black powder. I only fired four shots because trying to get the .445 balls started was literally a pain, even with the ball and nub on my trusty pistol loading rod.

I usually start with a fairly snug ball and patch combination and then shoot groups of five shots with various powder charges working in 5 grain increments. Depending on the caliber of the gun, you may also try to see if 3f black powder or 2f black powder produces better results. Keep in mind that 3f will burn faster and produce higher pressure than the same amount of 2f.

Once you’ve experimented with a few different powder charges, you might try another ball size, or try a different patch thickness or material to see how they affect your group if you are shooting patched round balls. A good patch and ball combination will not allow gas to blow by the ball because it will fully fill the grooves, and the patches should be recoverable undamaged after firing.

Too loose of a load will allow blow-by and lead to fouling. Too thin of patches or patches without enough lubrication may get burned through. Too tight of a combination may result in difficulty loading and cutting the patches as they are bumped into the rifling depending on the crown and any coning or lack thereof on the barrel. Different patch lubricants may also affect the groups. Experiment with different combinations until you’ve found something that shoots decent groups consistently.

Since the initial load was very tough to get started, instead of beginning with minor alteration to the powder charge, I first swapped to .440 balls and used the same .018 patches and 25 grain charge. When the smoke from the first shot cleared, I saw a nice round hole just under the bullseye. Was this first shot just luck? Only shooting more would tell.

If you are shooting a gun with rifling designed for conical bullets or Minie balls, you can experiment with different sized bullets, different weights, different lubricants, using over powder wads, etc. There is plenty you can do to figure out what shoots best no matter what your firearm is. The same goes for muzzleloading muskets, shotguns, “smooth rifles,” fusils, fowlers, etc. You can try different weights of powder and shot, buck and ball loads, single round balls, experiment with different wadding, cards, etc. to find out what shoots best or works for various scenarios.

Smoothbores are great since they can be versatile, but they can also take a fair amount of work compared to rifles to figure out the optimal loads. That is all part of the fun and a good excuse to get out and shoot. For example, with “smooth rifles,” some shooters are proponents of loading them up with patched round balls just like a rifle, but others prefer using just a “bare ball” load with a non-patched ball and a hefty powder charge, sometimes with wadding or cards above the powder charge and/or after the ball to keep it held in place.

The best way to find out what will work for you is to try it out. You can always check in with other shooters on the various online muzzleloading forums to get some of their “pet loads” for their similar firearms to get an idea of where to start.

The second shot dispelled the idea of the first being pure luck. It was right through the red. I dropped the third shot at the bottom of the 8 ring, but the next two shots showed that I had simply goofed up as a shooter. I blame cold hands. The fourth shot struck just to the left of the bullseye, and the fifth shot hid just below the 9 ring. This was definitely a good offhand group for me and showed the potential of this load. I look forward to getting out to try this load again soon and maybe try bumping the charge up to 30 grains to see if that makes any difference.

Once you’ve got a load that seems to shoot well at a given range, you may want to try a different distance if you also plan to shoot with that firearm at say 100 yards. A tight group at 25 yards can really start to open up at 50, 75, and 100 yards, and shooting at longer ranges can help you develop a really precise load. If you don’t intend to shoot at longer range, figure out what works best at the range where you shoot, and then keep shooting and working on your own skills, including shooting off-hand rather than from a bench.

Okay, so you’ve figured out a load that shoots accurately with your muzzleloader, and you’ve been punching neat little groups of holes or even one ragged hole into target after target for a few sessions. What do you do to keep practicing and keep things fun? Mix it up. Shooting jugs of water is always a thrill. Maybe try some targets with multiple bullseyes and see if you can hit each one in succession without missing.

One thing I’ve found to be a lot of fun is checking out the “postal matches” on the Muzzleloading Forum and American Longrifle forum. Both forums have their own matches each month, and the rules, targets, etc. change each time. This can provide a real challenge and also keeps things constantly mixed up. It is free to participate, and the targets can usually be printed at home for free.

Back in November I shot my .47 caliber John Krider half-stock percussion rifle while trying out the American Longrifle forum “postal match” shooting from an improvised rest at 50 yards. While I definitely goofed up on two of the shots, three of them were pretty good for a roughly 180-year-old rifle. I only got the chance to shoot one group that day due to winter weather blowing in. I had no dreams of winning a match, just some good time out at the range.

If you’d like to learn more about muzzleloading and load development check out these online resources: