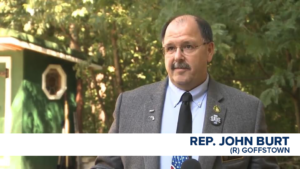 Yesterday was a good day in Concord!

Last week, I wrote and told you that five public hearings would take place on January 26. I’m writing today to give you an after action report.

The Criminal Justice and Public Safety Committee heard public testimony on HB 1636 which will extend Constitutional Carry to snowmobiles and ATVs. Pro-gun champion, Rep. John Burt, introduced the bill and forcefully argued about the people’s right to armed self-defense and the right to carry a gun anywhere they go — no matter what the mode of transportation is. The Committee voted HB 1636 “ought to pass.”

* HB 1096 bans the open carry of firearms within 100 feet of a polling place. I reminded the Committee that New Hampshire has a centuries long history of people going about their daily lives armed without any problems.

* HB 1151 bans the open carry or display of a firearm at funerals and parades. Anti-gun leaders Rep. David Meuse and Rep. Debra Altschiller tried to convince the committee that people who are legally carrying guns are exerting “coercive control” over other people. This is non-sense. I told the committee that if someone else feels that they are in danger, they can legally arm themselves. The Committee didn’t buy the ruse and voted the bill ITL.

* HB 1668 bans sales, gifts or loans of firearms between friends and family members — in other words, sell a gun to a friend and go to jail! Anti-gun leader Rep. Katherine Rogers tried to persuade the committee that her bill would not ban private sales, loans or gifts of firearms, but they saw through that ruse as well and voted HB 1668 ITL.

The only bad news of the day was that HB 1178, which will prohibit local and state police from enforcing federal anti-gun laws, was not voted on. The Committee may form a subcommittee or hold another hearing. I will watch the House calendar and send an alert when action is needed.

After the hearings concluded for the day I was approached by several state reps. who were very impressed by the huge number of emails received from GOA activists. You all deserve a pat on the back. When I go to the State House I can only be successful if the legislature knows that I am backed up by thousands of committed gun owners!

In addition to testifying and answering questions, I submitted four letters to the Committee which you can read by clicking here.

Please watch your emails, GOA will let you know when you are needed to take action.