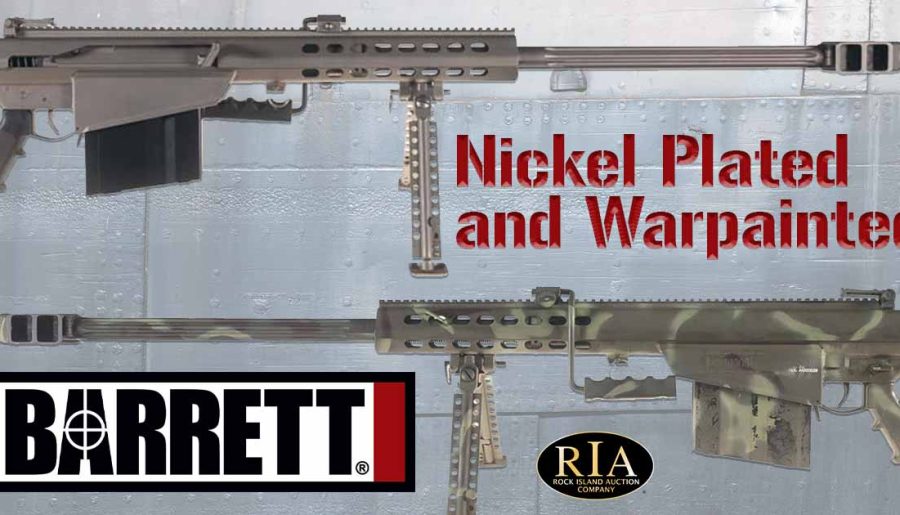 Rock Island Auction Company is fortunate enough to enjoy a friendly relationship with Barrett Firearms.  In fact, last year (2012) a handful of RIAC executives headed down to Murfreesboro, Tenn., to Barrett headquarters and received more than just the 25-cent tour.  A tour of the factory was involved, but so were some “behind the scenes” glimpses.  This included several memorable experiences such as being shown around certain R&D areas, and some fun range time which included handling and firing the (then) brand new MRAD.  The MRAD would later be named Shooting Illustrated Magazine’s 2012 Rifle of the Year as well as receive the NRA’s prestigious Golden Bullseye Award.  They truly extended their hospitality to us that day.  We were even more honored when Barrett contacted us earlier this year to sell some of the items residing in the Barrett Firearms Archive!

This week’s article highlights a pair of the famous M82A1 Barrett rifles that have enjoyed immense success with numerous law enforcement agencies, tactical groups, and over 73 different governments!  That success didn’t come easy.  Founder and President Ronnie Barrett, then a professional photographer with no engineering education, personally hand-sketched the designs of every single part of the weapon at his dining room table.  What parts didn’t yet exist, he would work with a local tool and die maker to create.  He then marketed and mass-produced it out of this own pocket.  Some of the production work would take place in a gravel-floored garage with the finished products resting on gun racks made in his father’s cabinet shop.

All the hard work would, of course, pay off. The M82A1 would be a gun that no one thought possible: a shoulder-fired, .50 caliber rifle.  It could be used to disable and immobilize vehicles, as a sniper/counter-sniper rifle at extended ranges, as a explosive ordinance disposal tool, and potentially to fire through/breach barriers.  With standard .50 BMG ammunition, the M82A1 can engage man-sized targets over a mile away (as we will soon discuss), armored objectives from 2,000 meters, and can penetrate up to 30mm of of steel plate.  It is a behemoth of a gun, weighing in at around 30 pounds and firing cartridges with an overall length of 5.45″.  Lest you think this gun will dislocate your shoulder upon firing, the semi-automatic action, double chambered muzzle break, dual barrel springs, heavy weight, and long mainspring design keep the recoil quite manageable despite its awesome power.

These two rifles aren’t your typical, wildly-acclaimed Barretts.  Each one has a feature or story all its own, which is bound to drive collectors’ interest as our September 2013 Premiere Auction nears. 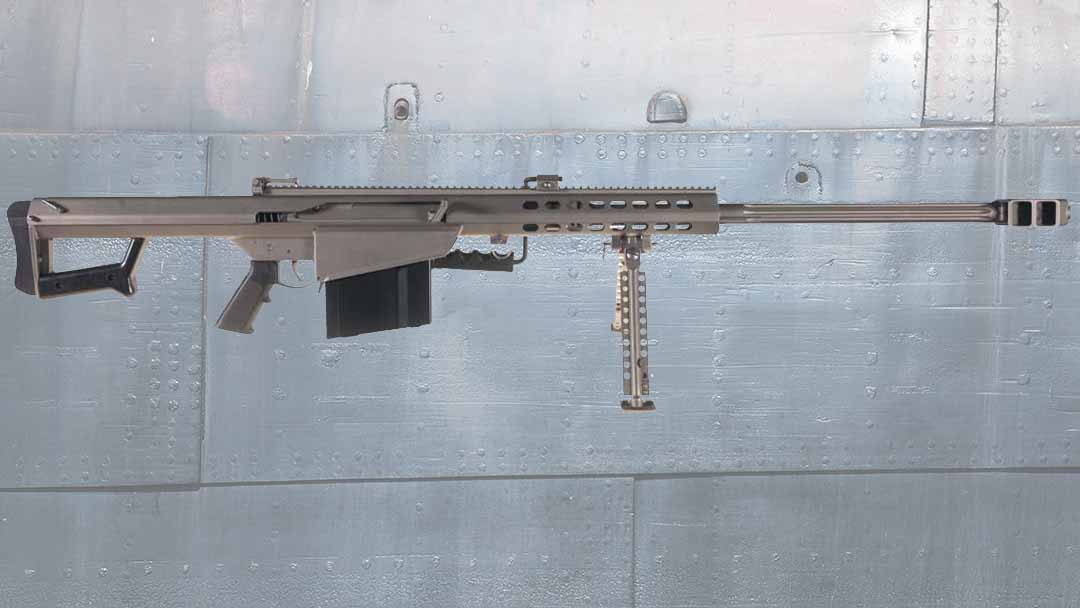 This Barrett M82A1 is more than just nickel plated, it is an electroless coating that co-deposits Teflon, rather than applying it afterward, giving it greater wear resistance, easy cleaning, and an attractive, deep silver color.

The lot description above is far from saying it all.  First of all, the nickel-teflon finish is applied in an unexpected manner.  The NP3 method uses an electroless nickel coating with PTFE (polytetrafluoroethylene, a.k.a. Teflon) co-deposited.  In simpler terms, instead of impregnated Teflon which is applied afterwards as a protective overcoat, co-deposited Teflon is mixed throughout the entire depth of the nickel, providing greater wear resistance, easy cleaning, and an attractive, deep silver color.  The finish is applied inside and out and thus, the rifle is self-lubricated.  This same finish was applied to the Barrett 30th Anniversary “One of One” tribute rifle, a one-of-a-kind rifle patterned after their M107A1.  Any Barrett is bound to get you attention when you bring it out, but this one is guaranteed to earn some envious looks even among fellow Barrett owners! 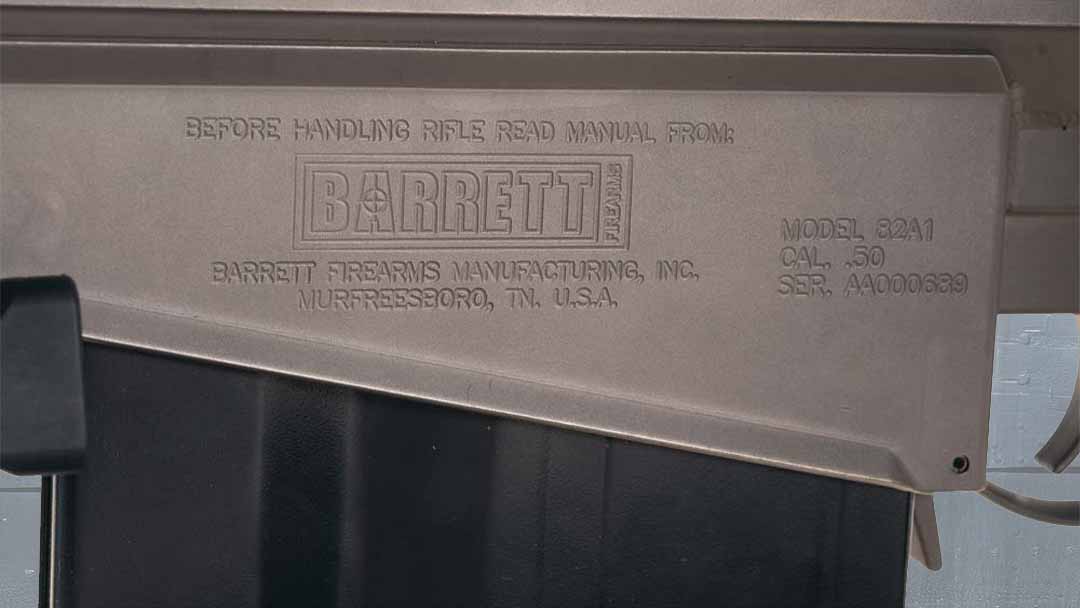 A closeup of the receiver of a Barrett M82A1 that is nickel plated using a Teflon that is mixed into the coating, giving it an attractive deep silver color.

While our first gun is special for what happened to it at the factory, our next gun earns its collectability for what happened once it left the factory grounds in Tennessee.  Upon its return to Barrett it was adorned with its current mixed green and brown camouflage, with the initials “SR” applied to the right side of the upper receiver and magazine, and the magazine also marked with an arrow passing through a stylized “S.”  Information from the Barrett Firearms Archives attribute these markings and paint job to Staff Sgt. Steve Reichert U.S.M.C. (Ret.). Reichert received the Bronze Star with V Device for his actions is Lutafiya, Iraq on April 9, 2004, while serving overwatch for a Marine patrol.  The events that happened that day are well documented and have even been featured in a segment entitled “One Mile Kill Shot” on History Channel’s sniper special “Sniper: Inside the Crosshairs” 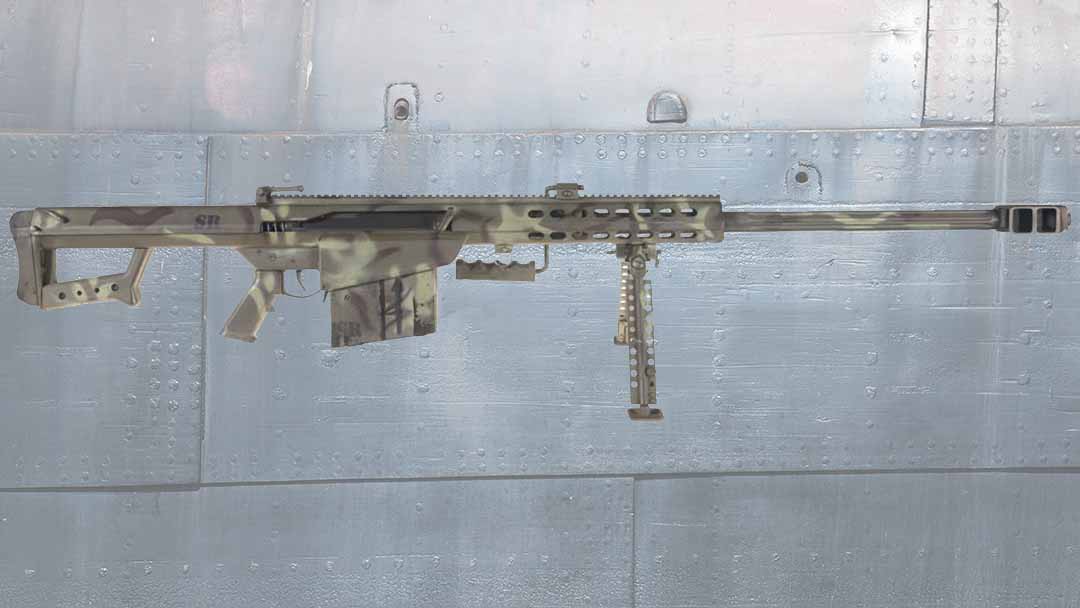 Fourteen Fox Company Marines are patrolling the roads outside of Lutafiya (loot-ah-FEE-yah) for IEDs and insurgents.  25 year-old, Staff Sgt. Reichert is providing overwatch with a Barrett M82A3 from an observation post set up on top of an oil tank roughly 1,000 yards away.

The A3 is different from the A1 by having a detatchable bipod and carry handle, long Picatinny rail atop the receiver, slightly lighter barrel and mechanism, and a slightly redesigned muzzle break.

Reichert’s spotter, Cpl. Winston Tucker, noticed a dead animal in the road that had not been there the night before. The carcass appeared to be “glinting” in a spot and so the Marines cordoned off the area around the potential IED.  30 seconds later, in the midst of setting up a perimeter, in Reichert’s words, “Everything erupted.”

Insurgents attacked the Marine Company with a volley of RPG fire, followed immediately with AK fire.  Dirt and dust clouds exploded with machine gun fire as the sniper team watched the action unfold.  With not a second to spare, Reichert begins “doping the scope” and looking for targets of opportunity.  He sets his scope to 1,000 yards +2 MOA (minutes of angle).  In this brief amount of time the Marines have fought their way into the town and have hunkered down in an abandoned school house. As the gunfire continues more and more insurgents, hearing the chatter of automatic weapons, come running to join the action.  The situation is rapidly escalating out of control and insurgents already outnumber the Marines. 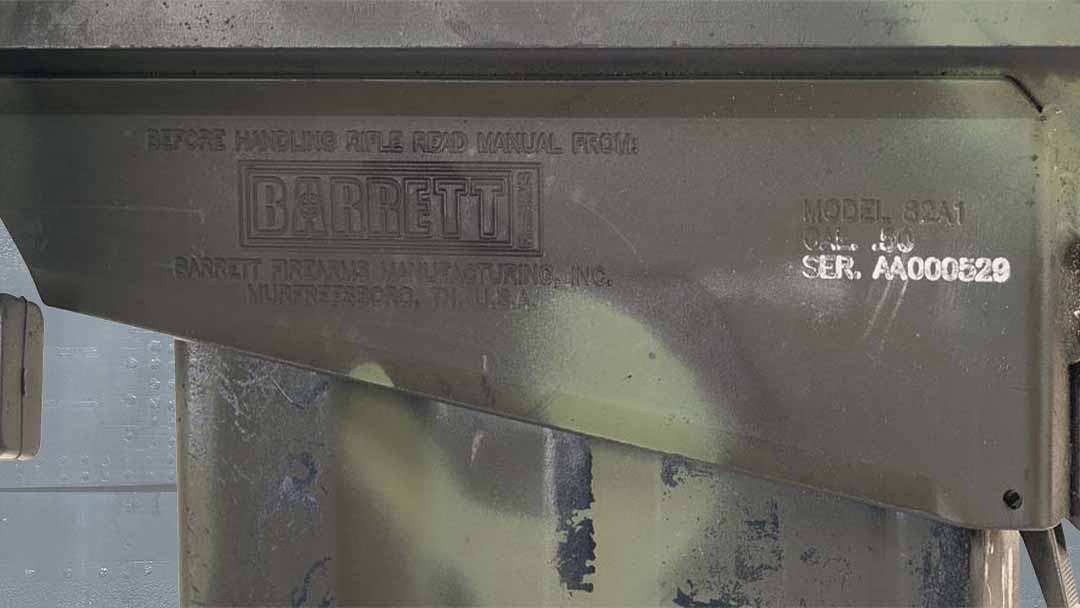 A closeup of the warpainted camouflage on a Barrett M82A1 attributed to Bronze Star with V Device and one-mile sniper Steve Reichert.

Reichert spots his first targets, men on rooftops firing down on the Marines, about 1,350 yards away .  In his words, “That’s when we went to work.”  His first shot is a miss, the fighting having moved several hundred yards away since he last adjusted his scope, but after a quick readjustment, the second shot slams its way home and all the sniper team sees remaining is a “pink mist.”  Remember, this is a weapon known more familiarly as the Special Application Scoped Rifle or “SASR” (pronounced: “sasser”).  The SASR was intended by the Army for use as an explosive ordinance disposal (EOD) tool and anti-materiel targets.  In other words: shoot it into explosives, engine blocks, armored vehicles, parked planes, and various other large, heavy, METAL targets.  When this weapon engages personnel, the results are catastrophic.

With the Marines pinned down, the sniper team notices 3 insurgents duck behind a wall with a belt-fed RPK machine gun.  An RPK fires the same 7.62×39 round as the AK-47, but utilizes a stronger barrel designed for continuous firing.  This is bad news for the Marines fighting for their lives inside the schoolhouse. Reichert immediately switches targets and swings the crosshairs to a point on the wall where he feels the group will be, over 1,600 meters away. The insurgents are preparing their weapon for use on the Marines, but Reichert has already prepared his.  In his M82A3 are Raufoss M211 .50 caliber rounds. 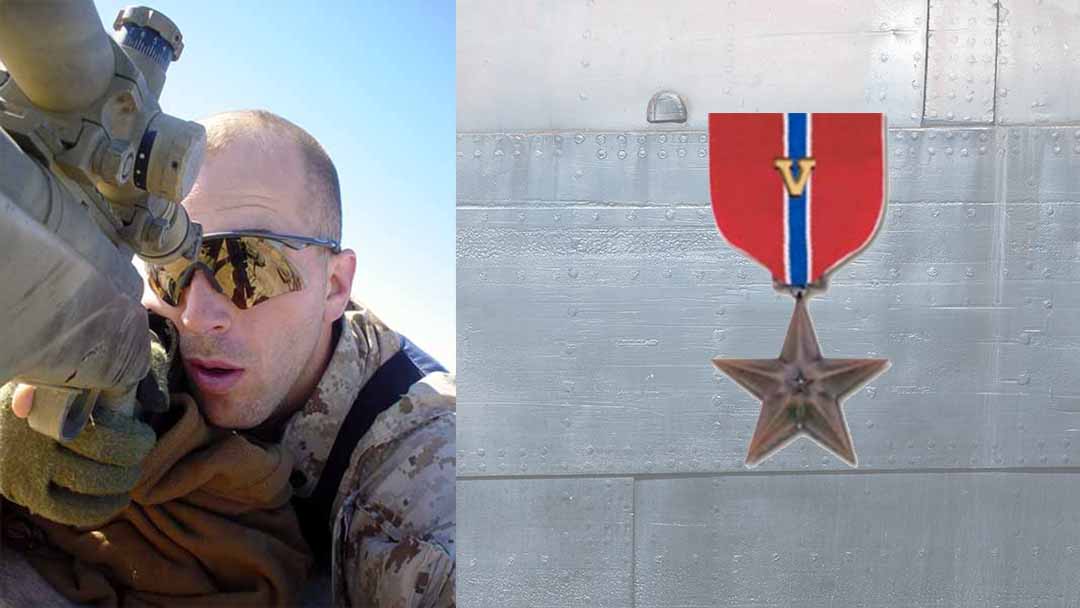 Staff Sgt. Steve Reichert takes aim. He is the winner of a Bronze Star with V Device for a one-mile sniper shot.*

After adjusting his scope a third time, Reichert takes his shot. The Raufoss round hits the brick wall at over 2,500 feet per second and makes a .50 caliber-sized hole.  The RDX inside the bullet then explodes, sending a tungsten-steel core punching through the wall, while Zirconium sparks and deadly brick shrapnel shower its opposite side.  Reichert calls it “basically a shotgun blast of shrapnel and a penetrating dart flying through.”  The shot lands true and the ensuing explosion instantly destroys the insurgents taking cover there, painting an opposite wall red. No insurgents were seen leaving the area. Miraculously, only one of the men was killed and the other two were severely injured.  All were out of the fight.

Reichert provides sniper support for the next 12 hours and saves Marines’ lives.  He even continued to fight after a communications failure put he and his spotter under friendly fire from another unit also attempting to assist Fox Company.  For his actions and performance, Reichert received the Bronze Star with V Device (for Valor).

After taking medical retirement from the Marines, Reichert entered the private sector as a military consultant and trainer, and in that capacity received this M82A1 from Barrett Firearms (circa 2011-2012) for use in his training courses.  When the rifle was returned to Barrett, it sported quite a different look than when it had left.  It was warpainted.

Once again, Rock Island Auction Company is selling iconic Barretts, whether it is a M82A1 with a special nickel plated coating or an M82A1 attributed to a sniper legend!  Not only is this model of firearm revered by firearms users world wide, but each of these guns has its own unique details that truly set it apart from the pack.  You can see all the unique firearms that RIAC has to offer, by joining our mailing list or by viewing our Online Catalog; each one is full of gorgeous photos that are sure to please collectors of all levels.  Enjoy! 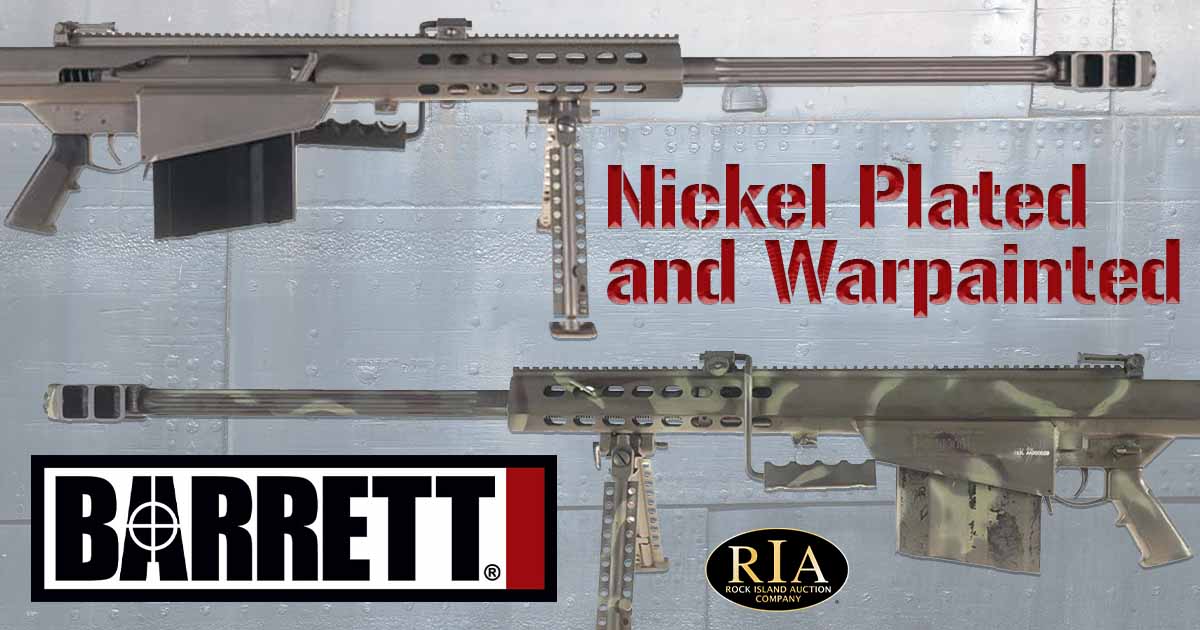