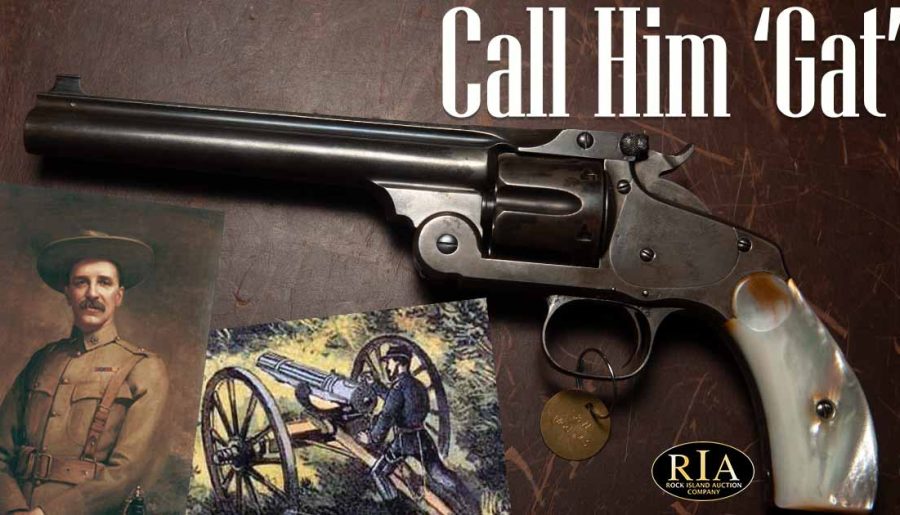 Arthur L. “Gat” Howard earned his reputation and nickname from behind a Gatling gun.

As slang for a gun, “gat” took hold in the early 20th century, but is clearly a play on Gatling gun, designed in 1862 and named after its inventor Richard J. Gatling.

Born in 1846, Howard served with the U.S. Cavalry for five years and fought in the Indian Wars on the western plains before going to work for Winchester Arms. Eventually he left Winchester and started his own cartridge manufacturing company and enjoyed some success before the factory burned down. Howard served in the Connecticut National Guard where he led the Gatling gun platoon, but it was in service of the Canadian government where Howard earned his nickname. 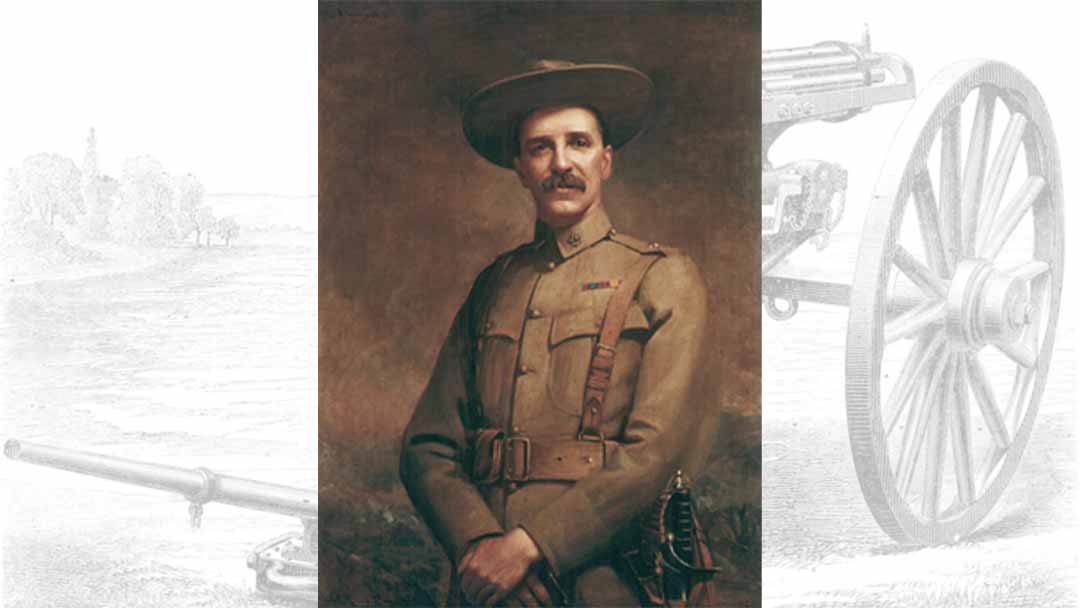 An American, Arthur L. “Gat” Howard earned his nickname working a Gatling gun in service of the Canadian military during the North-West Uprising of 1885. He stayed in Canada and also fought in the Second Boer War where he was killed in 1901.

Gatling, a doctor, invented his namesake weapon hoping to make a gun that would reduce the number of men in battle and lower the devastating losses seen early in the American Civil War. A precursor to the machine gun, Gatling’s multi-barrel, crank-operated weapon was patented in 1862 but not officially adopted by the U.S. military until 1866, after the end of the Civil War.

The Gatling gun available in the February Sporting & Collector Auction is an unmarked black powder reproduction of the Model 1862 which did not use self-contained cartridges as we know them today. It utilized steel cartridge chambers which were individually loaded with paper cartridges in the front and primed with percussion caps at the rear. 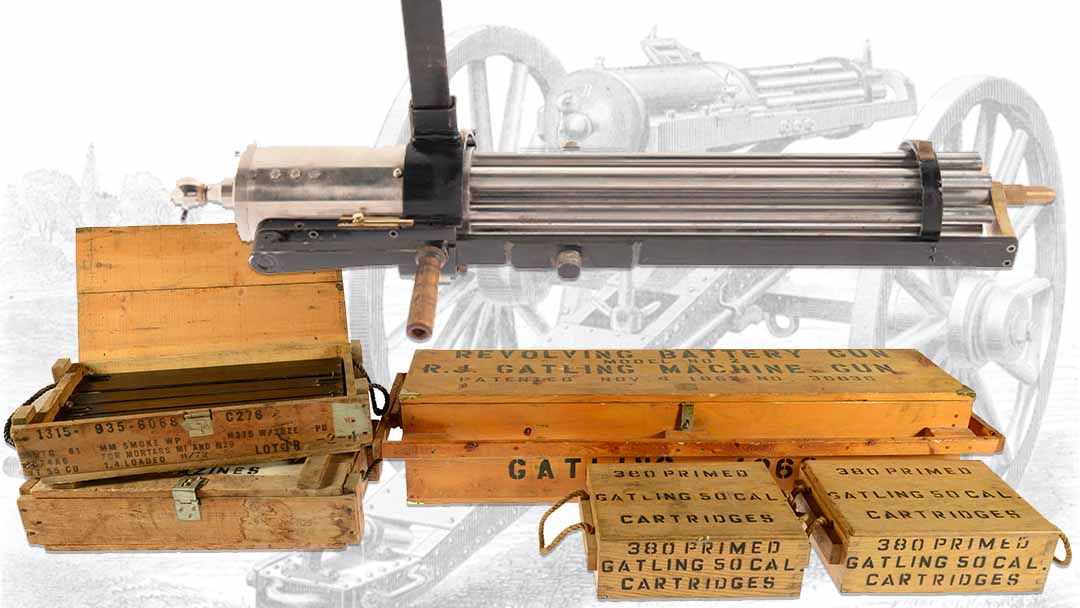 In 1885, rebellion was fomenting north of the border as indigenous people and mixed race settlers were unhappy about European settlers coming west, the Canadian government’s neglecting to recognize land titles in Saskatchewan and Alberta, and being under-represented in the Canadian parliament.

The Canadian government at the time had a small professional army and so enlisted militias to assist in quelling the uprising, amassing a military force of about 5,000 soldiers. Colt executives seeing a marketing opportunity, offered to loan a Gatling gun to the Canadian government.

The question was who would operate the Gatling gun? Colt and Gatling turned to Howard. He was not to be a representative of Colt, nor the Connecticut National Guard. Even Gatling stated that Howard didn’t represent him but was on the mission as “a friend of the gun.”

Gatling saw Howard, two of his guns, likely 10-barrel 1874 models, and 5,000 rounds of ammunition get on a train bound for Winnipeg. There was little time to train Canadian gunners.

In an early battle during the uprising, the Battle of Cut Knife Hill, the resistance gained the upper hand so it was up to a Gatling gun operated by a Canadian gunner to cover a retreat by government forces, preventing a possible massacre. Howard, as always wearing his blue army uniform, played a key part in stopping a charge in the decisive Battle of Batoche in May 1885 that ended the five month-long rebellion. Ultimately, it was the superior firepower of the government forces that led to the end of the resistance. 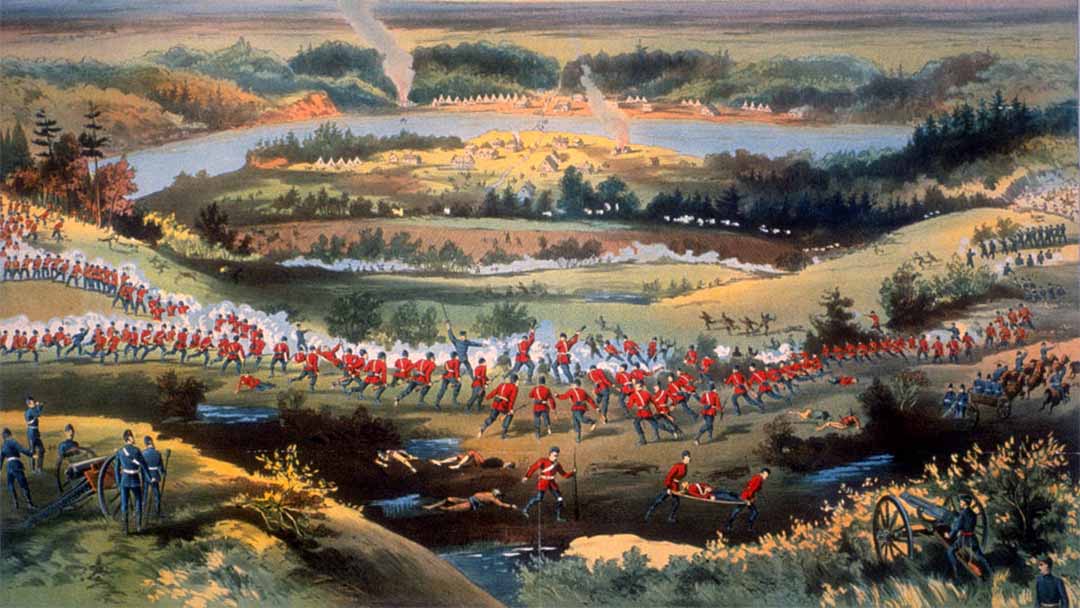 In this lithograph depicting the Battle of Batoche, in May 1885, Howard and the Gatling gun can be seen in the lower right corner, though the gun would likely have been placed closer to the action during the battle.

Canada after the Rebellion

Howard earned $5,000 and received a medal for his role in quashing the rebellion. He never returned to Connecticut, instead taking up residence in Montreal where he became an investor in the Dominion Cartridge Factory. Along with the stipend and medal, Howard also got assistance from the Canadian government that allowed him to import materials for the cartridge factory duty free. The business made him a wealthy man.

His actions gained Howard enough fame that his purported death and survival in a storm off Nova Scotia was reported by The New York Times. He grew weary of the tedium of Montreal and as the Boer War began in South Africa, he offered to commission a battery of four machine guns at his expense but was refused. Instead, he was offered and accepted a position as machine gun officer in the 1st Canadian Mounted Rifles. 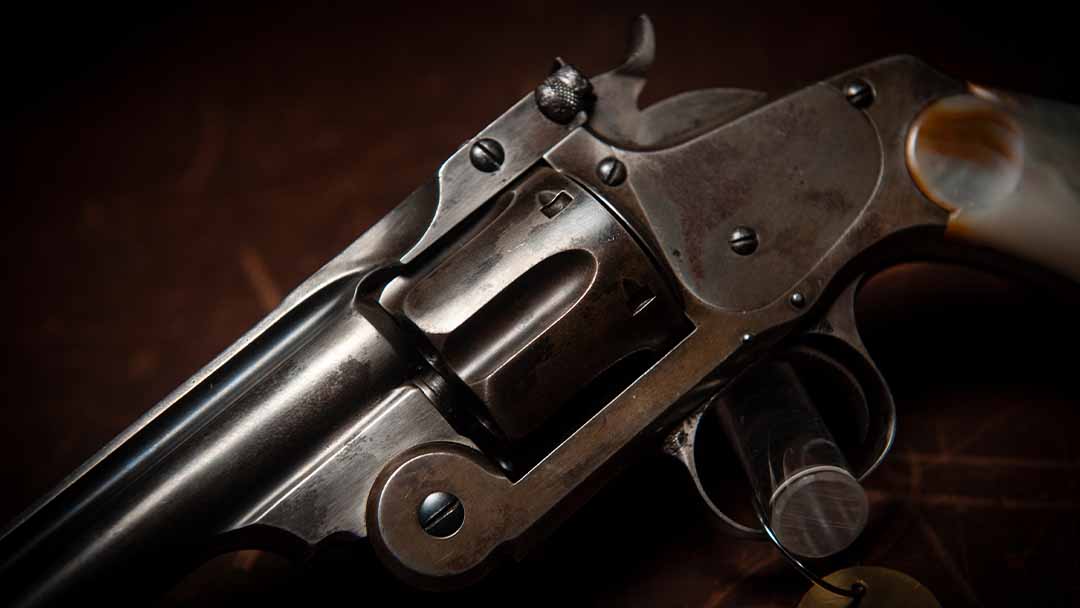 This Smith & Wesson New Model No. 3 is attributed to Arthur L. “Gat” Howard, who gained fame and his nickname from operating a Gatling gun during Canada’s 1885 North-West Uprising. It is available in Rock Island Auction Company’s Feb. 14-17 Sporting & Collector Auction.

Conflict between the descendants of South African Dutch settlers, called Boers or Afrikaners, and British colonists exploded into open warfare in 1899. The British took control of most of the territory as the Boers began fighting with guerilla tactics.

In South Africa, Howard commanded a Maxim and Colt machine gun. An aggressive and fearless leader willing to fight at close quarters, he didn’t return to Canada with his unit in December, 1900, choosing to stay in South Africa where he organized the Canadian Scouts, equipped with air-cooled Colt Model 1895 machine guns.

Two months later, in February, 1901, Howard was killed at the age of 57. Reports of Howard’s death varied, with some saying he and his aide were killed in an ambush by Boers, or that they were captured and murdered. In a short article in The New York Times, he was described as “an intrepid and absolutely fearless fellow.”

The article also stated “He knew a machine gun perfectly and it was his skill in handling the gun of the Gatling make that earned for him his title during the Riel rebellion when he was in the Canadian Service.” 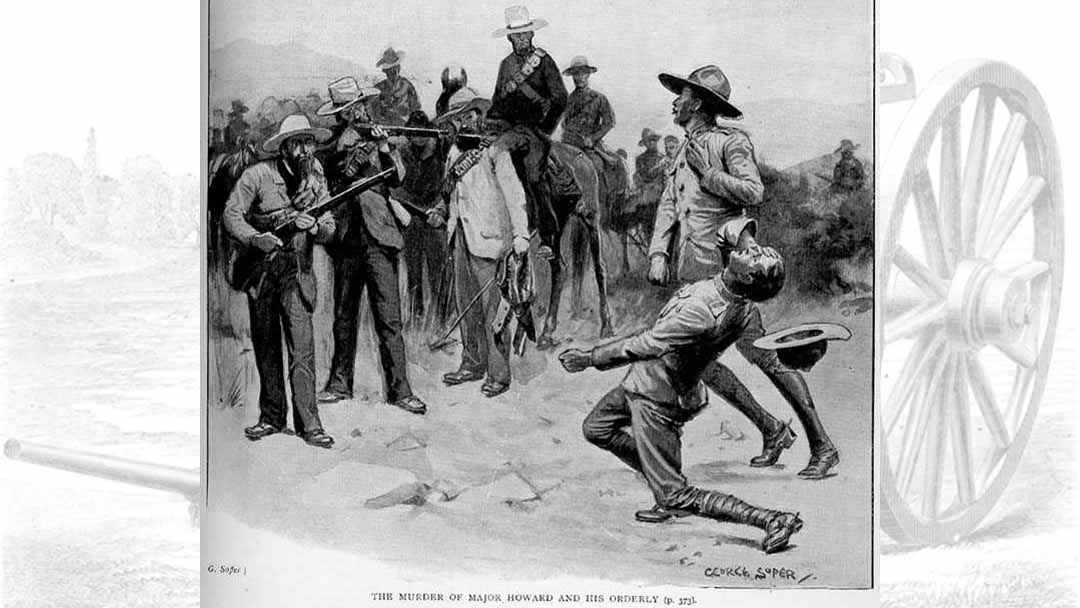 A drawing from a news periodical of the time portrays Arthur L. “Gat” Howard’s death in 1901 during the Second Boer War. Accounts varied that he and his aide were killed in an ambush or that the men were captured by Boers and executed.

Arthur L. “Gat” Howard was a man of action who joined in the Canadian government’s effort to put down a western uprising, earned his reputation and nickname as a Gatling gunner. An American who remained in Canada, Howard fought in the Boer War where he met his death. A Smith & Wesson New Model No. 3 with pearl grips and attributed to Howard is on offer in the Feb. 14-17 Sporting & Collector Auction, as is a Gatling gun Model 1862 black powder reproduction of the weapon that ushered in the machine gun. 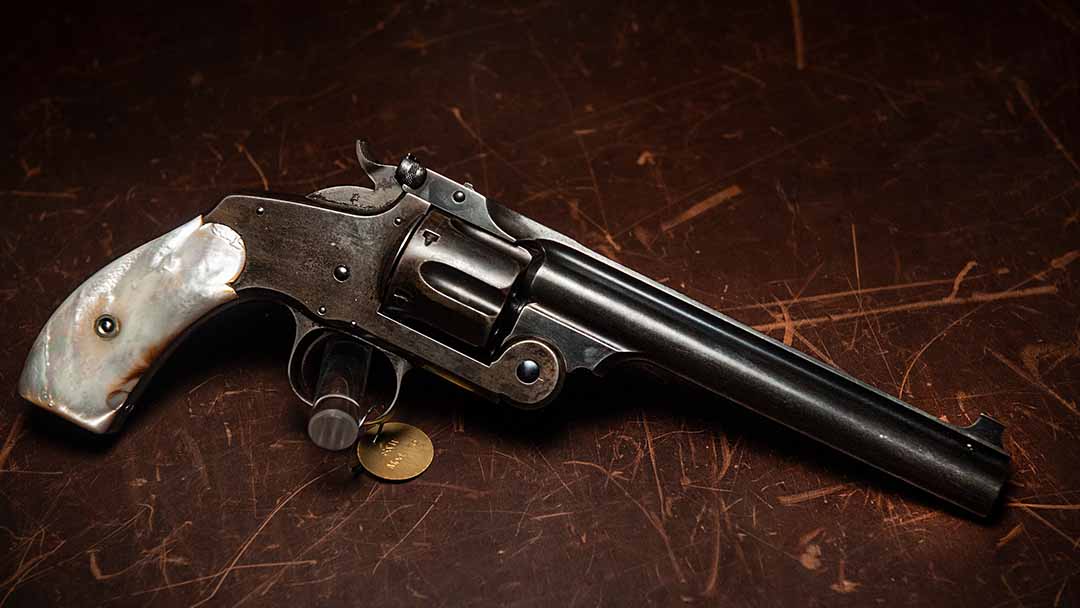 “A Connecticut Yankee (and his Gatling) in Queen Victoria’s Canada,” by Terry Edwards, Small Arms Review 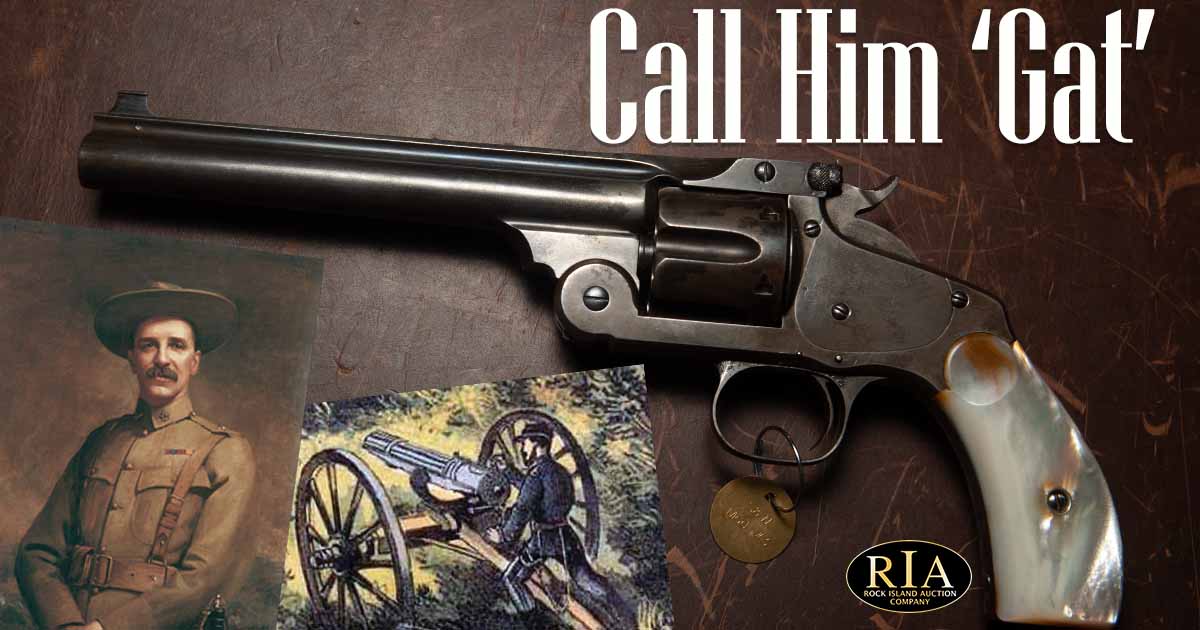