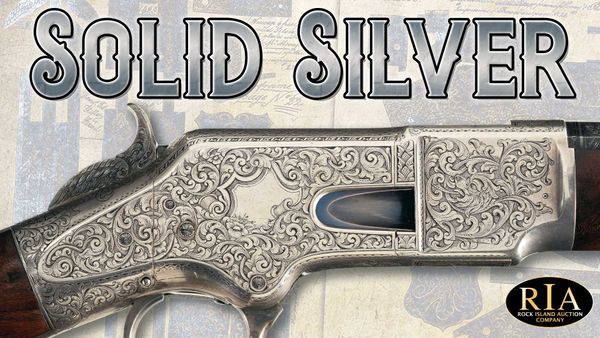 This solid silver Winchester 1866 rifle stands as one of the rarest and most spectacular firearms in the history of American gun making. A masterpiece on all counts, this rifle was the magnum opus of the legendary Louis D. Nimschke, a giant in the world of nineteenth-century arms engraving.

The cast solid silver frame – not silver plated – on this rifle alone makes it one of the most extraordinary Winchesters ever created. Combined with Nimschke’s exquisite workmanship and the rifle’s rich history as a piece commissioned by President Jose Balta of Peru for presentation to President Mariano Melgarejo of Bolivia, and you have a priceless treasure that could headline even the most distinguished firearms collections.

Declaring any gun the rarest of its kind is no small claim, but this solid silver Winchester ’66 makes a strong case for itself as the rarest Winchester rifle in the world. Renowned Winchester author R.L. Wilson notes this rifle as “a unique masterpiece of an American gunmaker with a combination of features found on no other gun. Signed by the engraver more times than any other gun in his 50-year career.”

Nimschke’s solid silver Winchester checks all the right boxes when it comes to supreme rarities in gun collecting.

Not only is this gorgeous rifle the only documented solid silver Winchester ever built, but its lever is another singular feature, being custom hand-forged to a shape never previously found on any Winchester rifle.

Nimschke himself regarded this rifle as his most significant work, as evidenced by the record seven signatures he included, one of them being the longest inscription found on any Nimschke engraved firearm. He also prominently featured the rifle’s elaborate renaissance-style engraving patterns in his famous pull book.

Between Nimschke’s extensive signatures and phenomenal craftsmanship, the piece’s custom lever and immensely unique solid silver construction, and the rifle’s historic significance as a gift between two dictators, a one-of-a-kind rarity begins to emerge. The Winchester’s lack of serial number only heightens the point; this rifle stands in a class of its own.

“It is the writer’s firm opinion that the Solid Silver Winchester Model 1866 Rifle ranks as a unique example of the pre-eminent position of American gun making in the 19th century.” – R.L. Wilson

This magnificent Winchester lever action rifle features an extravagant cast solid silver frame, carrier block, butt-plate, and forend cap. While silver inlays, accents, and finishes are found on high-end firearms throughout the ages, a rifle whose major components are fashioned from solid silver is practically unheard of.

One of the few comparable examples is a German silver Winchester that wowed the gun collecting world five years ago and realized $483,000 at Rock Island Auction Company. German silver is a white alloy of copper, zinc, and nickel manufactured as a more affordable silver substitute. While the German silver Winchester had an interesting history in its own right, Nimschke’s solid silver masterpiece is even more valuable.

With its cast solid silver frame and lavish ornamentation, Nimschke’s crown jewel achievement is an example of custom gun making at its most exquisite and exclusive level. The high-quality silver is believed to have been supplied to Winchester from the rich mines of Peru, a nation ruled by the rifle’s wealthy financier, then President Jose Balta.

A Gift between Dictators

Following the American Civil War, American gun manufacturers looked to market their wares in the militant nations of Central and South America. High-end Winchesters were especially popular with the upper classes, and a silver Winchester would have been a well-suited presentation piece between two South American dictators from nations known to produce the precious resource.

The Winchester 1866, a popular rifle of the South American elite.

Under the Spanish Empire, Mexico, Bolivia, and Peru accounted for more than 85% of the entire world’s silver supply, and they continued to be major sources of silver after independence despite excessive political and civil turmoil. Mariano Melgarejo of Bolivia and Jose Balta of Peru both heavily relied on the silver trade during their brief reigns.

A monogram for Mariano Melgarejo.

Mariano Melgarejo and Jose Balta were both soldiers who became presidents after participating in coups against their nation’s ruling elite. A rebellion in Bolivia in late 1870 sent Mariano Melgarejo fleeing to Peru, which was under the control of his ally, President Jose Balta.

With support from the military, Jose Balta remained in power for a full presidential term. By the time of the 1871 election, Peru’s debt had spiraled out of control and Balta did not seek another term. A growing rift between the Peruvian military and civilian leadership resulted in a coup attempt by Defense Minister Colonel Tomás Gutiérrez, and Balta was one of the many casualties in the violence that followed.

German-American engraver Louis D. Nimschke quickly rose to prominence after establishing his New York studio in 1853, going on to customize firearms for presidents and emperors. Nimschke excelled at relief work, the process of cutting away surrounding metal to create a three-dimensional design. Nowhere is Nimschke’s high level of mastery more evident than the detailed panel-scene engravings, flowing scrollwork, monograms, and signatures found on his solid silver Winchester.

The silver Winchester rifle was created fifteen years into Nimschke’s professional career and is a tour de force for the engraver’s impeccable talent. From traditional hunting scenes to fanciful beasts inspired by renaissance designs, the rifle’s ornamentation demonstrates Nimschke’s versatility as an artist, and it’s little wonder that the famous craftsman felt the need to leave seven signatures on such an impeccable masterwork.

The most prominent signature is “L.D. NIMSCHKE ENG. NY.” signed in the scroll engraving on the bottom of the frame between the cartridge elevator and lever.

Not only is this rifle an illustration of an elite engraver at his finest, it’s also an example of how comparatively new factory techniques and traditional handcraftsmanship could be combined to produce unique and magnificent artwork. A true cornerstone of Nimschke’s storied career, and one of the most valuable treasures in gun collecting today.

Born in Germany, Louis Daniel Nimschke studied at the Industrial School in Zella, Thuringia, training under the direction of master artisans like Ernst Moritz and Gustav Ernst. Nimschke immigrated to America in 1853 and became a lifelong resident of New York City, quickly establishing a reputation for himself.

L.D. Nimschke helped develop what would become a distinctly American style of firearm engraving. Factory production was creating an ever more standardized and arguably utilitarian appearance in common arms, and customers hoping to personalize their weapons sought out freelance artisans like Nimschke.

While Nimschke was inarguably one of the finest engravers of his era, he worked amid an impressive field of talented artisans. Before Nimschke set foot in America, Gustave Young was already making a name for himself in Harford, Connecticut, engraving masterpieces for Colt and Smith & Wesson.

Young and L.D. Nimschke were both trained under Ernst Moritz and Gustav Ernst in Zella, and though the two German immigrants developed distinctive patterns and styles, their shared foundation is also evident.

Brothers Conrad, Herman, and John Ulrich were another example of northern European immigrants who distinguished themselves as master gun engravers in the late 19th century. Nimschke inspired their work, and their work in turn inspired Nimschke, a creative synergy that influenced an entire generation of artisans and resulted in some of the finest firearm ornamentation of all time.

Not all Art is Framed

As Nimschke’s craftsmanship testifies, fine engraved arms fashioned by master artisans can carry the same aesthetic value as framed paintings, classic sculptures, and other historic art pieces. Investors have taken notice of the undervalued firearms market in recent years. As some of the rarest and most sought-after guns are offered to the public for the first time, the idea of owning one of these timeless treasures seems more attainable than ever before.

Rock Island Auction Company’s December 3-5 Premier Firearms Auction features high condition rarities from around the world, including museum-worthy masterworks that could be displayed in the Louvre. There’s no better time to invest in a market that continues to expand and set records and reaches a broader audience every year.

If there are any questions regarding consignment, registration, or future auctions, please contact Rock Island Auction Company today. Our website is frequently updated with our auction schedule, and our new custom catalogs make organizing your preferences easier than ever, so keep an eye out for future updates and plan your visit today! All our events adhere to the latest COVID-19 guidelines and restrictions.