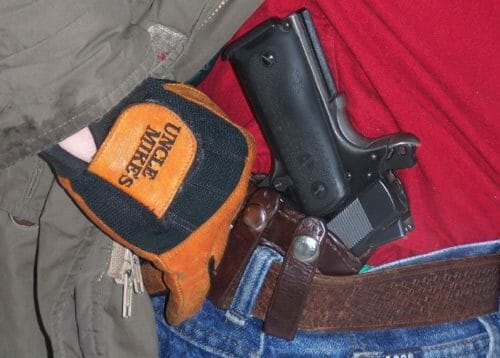 U.S.A. –-(AmmoLand.com)- Don’t break out the party favors just yet, but when the New York Times concurs with one of the nation’s leading gun-rights advocates that the U.S. Supreme Court is likely to strike down a gun control law in New York State, the odds they’re both right increases dramatically.

The high court heard oral arguments in the case of New York State Rifle & Pistol Association v. Bruen—challenging the state’s requirement that applicants for a permit to carry a handgun in public must show “roper cause”—and in the aftermath, NY Times reporter Adam Liptak wrote, “A New York law that imposes strict limits on carrying guns outside the home seemed unlikely to survive its encounter with the Supreme Court, based on questioning from the justices on Wednesday.”

Alan Gottlieb, founder and executive vice president of the Second Amendment Foundation said likewise in a statement to the press, and in a related AmmoLand story that may be read here.

Writing at SCOTUSblog and Howe on the Court, Amy Howe observed, “…it seemed likely that New York’s 108-year-old handgun-licensing law is in jeopardy. But the justices’ eventual ruling might be a narrow one focused on the New York law (and others like it), saving broader questions on the right to carry a gun outside the home for later.”

Among McKenna’s observations was that carrying a pistol in a holster “probably doesn’t” constitute “brandishing.” This suggests that open carry in a peaceful manner by someone going about his/her routine business does not rise to the level of a criminal act.

But there is a lot more to be learned from the transcript of Wednesday’s hearing—which may be read here—and from coverage in the NY Times and at Fox News.

“New York is entitled to have laws that say that you can’t have weapons in sensitive places,” Clement told the justices.

However, in the transcript, Clement also said this, as quoted on Page 119: “In a country with the Second Amendment as a fundamental right, simply having more firearms cannot be a problem and can’t be a government interest just to put a cap on the — the number of firearms. And that just underscores how completely non-tailored this law is. It might be well-tailored to keeping the number of handguns down, but it’s not well-tailored to identifying people who pose a particular risk or anything else because it deprives a typical New Yorker of their right to carry for self-defense.”

A few sentences later, Clement added, “I want to say a quick word just about permitting. There may be limiting permitting in other contexts like parade permitting, but I’m not aware of any context whatsoever were, in order to get a permit, you have to show that you have a particularly good need to exercise your constitutional right. And I think that is the absolute central defect with New York’s regime here.”

Under questioning by Chief Justice John Roberts and Associate Justice Samuel Alito, Underwood did not seem to fare well. As noted by the NY Times, Underwood’s argument in favor of the current law hit some speed bumps.

Underwood replied, “Well, I — I think it is implicated when you’re out in the woods. It’s just a different set of problems. I mean, you’re…”

Underwood, according to the transcript, then attempted to finish her remark, “– you’re deserted there and you can’t — and law enforcement is not available to come to your aid if something does happen. But…”

And Roberts interrupted again, “Well, how many muggings take place in the forest?”

A moment later, Underwood was challenged by Alito regarding armed criminals on the subway. They have weapons, but under existing New York law, honest citizens are left unarmed. Underwood’s response could leave self-defense advocates astonished.

“The core right to self-defense,” she stated, “– as — as this Court said, doesn’t allow for all to be armed for all possible confrontations in all places.”

Possibly the best signal for which way the high court will travel came from Chief Justice Roberts, during an exchange with attorney Fletcher.

“If you’re asserting a claim to confront the witnesses against you under the Constitution,” Roberts observed, “you don’t have to say I’ve got a special reason, this is why I think it’s important to my defense. The Constitution gives you that right. And if someone’s going to take it away from you, they have to justify it. You don’t have to say when you’re looking for a permit to speak on a street corner or whatever that, you know, your speech is particularly important. So why do you have to show in this case, convince somebody, that you’re entitled to exercise your Second Amendment right?”

A few moments later, the chief justice stated, “I mean, you would — regardless of what the right is, it would be surprising to have it depend upon a permit system. You can say that the right is limited in a particular way, just as First Amendment rights are limited, but the idea that you need a license to exercise the right, I think, is unusual in the context of the Bill of Rights.”

A ruling in the New York case likely will not be handed down until late June, when the court traditionally issues its most controversial decisions. A ruling nullifying New York’s gun control law in the middle of the campaign season for the upcoming 2022 Midterm elections would be nothing short of earth shaking, with the tremors being felt especially on Capitol Hill and in the legislatures of not only New York, but New Jersey, Maryland, California and at least four other states with similar restrictions.