U.S.A. -(AmmoLand.com)- The 2022 federal Congressional elections are 13 months away. Professional prognosticators and history will say Republicans supportive of Second Amendment rights will take back the U.S. House of Representatives from antigun Democrats. Even the Senate may swing to a firearm-favorable majority.

Off-year 2021 elections in New Jersey and Virginia may give a sneak peek to how voters may have changed their minds to be more supportive of the Second Amendment. Many citizens in those states are part of the greater national pattern and purchased firearms in historically high numbers over the past 18 months. What the governors of each state may do to support or restrict their rights could sway the outcome.

Gubernatorial debates have taken place in each state and at this time, the races are close. Polls close in four weeks, that’s a lifetime in politics.

New Jersey is in firm Democratic control and has long been a state with strict gun control. Democratic Gov. Phil Murphy is one of the staunchest gun control governors in the country. It’s something he wears as a badge of honor and he’s trying to become the first Democratic incumbent to win a second term from Jersey voters in 44 years.

Gov. Murphy and former Republican state Assemblyman Jack Ciatterelli faced off in a debate last week. Not surprisingly, the governor brought up gun control to burnish his record.

“I’m proud of our record of making New Jersey the strongest gun safety state in America,” Gov. Murphy said. “I feel sometimes my opponent is running for governor of Texas. He wants concealed carry. He wants more rounds in magazines. He voted against banning .50-caliber weapons and against universal background checks.”

Ciatterelli responded simply. “Nothing the governor just said is truthful about me.”

Gun control politicians often highjack language to deceive voters. That ruse, though, is up as more and more Americans recognize the game antigun politicians play. In the case of Gov. Murphy, “strongest gun safety” measures, that translate to severe restrictions and the chipping away at Constitutionally guaranteed rights. Gov. Murphy went so extreme during his first term as to use Constitutionally-questionable authority to shut down the firearm industry and halt all background checks during the coronavirus pandemic, exactly when firearm sales soared. He was rebuffed on that overreach, was sued , and ultimately forced to walk back his order and allow retailers to open and background checks to be processed.

Gov. Murphy may be proud of his blatant overreach, but New Jersey residents told a different story through their actions. In 2020, the FBI processed 178,000 NICS background checks in the Garden State. So far in the first half of 2021, that number has already reached more than 167,000. Even though Gov. Murphy isn’t predicted to be in danger, gun owners aren’t on the same page as his “strongest gun safety” measures.

Former Democratic Gov. Terry McAuliffe is re-auditioning for the role he held previously. In Virginia, governors cannot serve consecutive terms, so after sitting it out for Democratic Gov. Ralph Northam, he’s giving it another go. No surprises since he served as the Commonwealth’s top executive from 2014-2018, and he’s running his old gun control playbook.

“As governor, I will work tirelessly to eliminate these weapons of war from our streets, keep guns out of the hands of domestic abusers, and keep our communities safe,” he’s said.

Those plans include implementing a taxpayer-funded gun control agency, banning Modern Sporting Rifles (MSRs) – the most popular selling semiautomatic sporting rifle in the country with more than 20 million in circulation – banning so-called “high-capacity magazines,” instituting “red flag” laws that deny the accused Due Process and more. Polling shows the gap between front-running former Gov. McAuliffe and Republican challenger Glenn Youngkin tightening to within the margin of error.

McAuliffe is nervous and getting gun control help. Everytown for Gun Safety, the billionaire Michael Bloomberg-backed gun control group, pledged nearly $2 million to push McAuliffe and Democrats in the state across the finish line to pass more gun control on Virginians. In the Old Dominion, nearly half a million FBI NICS checks have been processed so far in 2021. Virginians look on with watchful eyes as more gun control may be coming their way.

As firearm sales in 2021 are running strong, second only to the record 21 million firearms sold last year, the politicians’ calculus has changed. It’s why President Joe Biden’s ATF nominee David Chipman didn’t even receive the support of all Senate Democrats and was withdrawn. It’s why gun control measures in Congress have stalled. It’s why these governors’ mansions for gun control aren’t a sure bet in November. 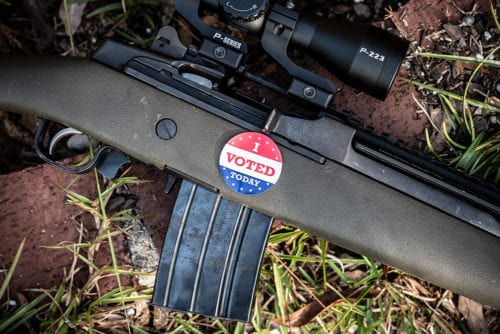