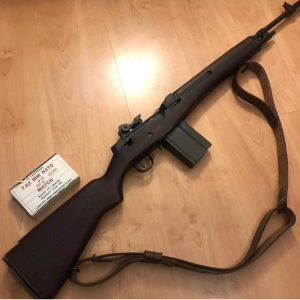 Guest Review of the Springfield M1A

To fully understand and appreciate the M1A, first one must understand the history of the M14.

History of the M14

The M14 was heavily influenced by the M1 Garand which is a semi-automatic firearm that is fed from an 8 round en-bloc clip and was designed by John Garand. The M1 Garand served as the main battle rifle for United States servicemen all the way through WWII and Korea. It was called “The greatest battle implement ever devised” by General George S. Patton, but by the 1950’s, the U.S. War Department was looking for a replacement. In fact, the American government wanted to also replace the M3A1 Sub Machinegun (Grease Gun), the Browning Automatic Rifle (BAR), and the M1 Carbine. They were looking for a modern rifle that would be select-fire and have detachable magazines so it can be versatile in all situations. 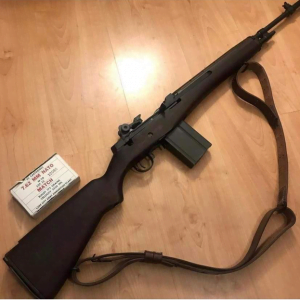 John Garand and Springfield Armory were first tasked to design a replacement for the M1 Garand and thus created the T20 E2 Rifle in 1945, but soon World War II would end, and the project was scrapped by the War Department. The T20E2 had a twenty-round detachable magazine and was capable of fully automatic fire but was chambered in the venerable .30-06 as was the M1 Garand.By the early 1950s, NATO was looking for all countries to standardize on a cartridge that would “exceed” or equal the performance of US .30-06 Springfield. In 1953, after substantial testing and discourse NATO adopted the T65E3 cartridge, known today as the 7.62mm NATO round. Many European countries began adopting the FN-FAL (aka, the Right Arm of the Free World) chambered in the new NATO round. The US would produce an Americanized version of the FAL called the T48 that fit the War Department specifications. The American FAL and the M14 would compete in a year-long trial by the US Army to see which would be adopted and the M14 won.

By 1965, the M14 was being issued to Marine and Army units in Vietnam at a manufacturing cost of approximately $104 each. The M14 was well-liked by many soldiers especially by those who were already trained on the M1 Garand, but the 7.62 NATO round was found to be uncontrollable in full auto and so troops preferred to operate in semi-auto mode. The brass seemed to notice the preference and so many M14’s were issued with their selectors pinned to semi-automatic fire only. The M14 was heavy, weighing in at a little under 11 pounds fully loaded, and not an ideal rifle to carry through the jungles of Southeast Asia. Also, the M14 wooden stocks were not holding up in the wet-humid climate of the jungles of Vietnam and so the US War Department would soon look for a replacement. After only a few years of service, the M14 would be replaced as the United States Military standard issue rifle by the M16, despite significant problems with early M16s (mostly ammo related). Many servicemen especially marines were very hesitant to give up their M14 battle rifle for the M16 but eventually did.  The M14 would continue to be used by rear-echelon forces and in the 1990s it started to be equipped with optics and thus saw use as a Designated Marksman Rifle and designated as the M21 and M25.

The Springfield M1A comes in many different variations and options available including, the M1A Scout, the M1A SOCOM, the M1A Super Match, the M1A National Match, and M1A Loaded Rifles and Standard Rifles. Many of these rifles have the option to come with different color polymer stocks, wood stocks, and a variety of rails. Around five years ago, I purchased the M1A Standard. I have been very happy with my standard M1A as it has been a very accurate and reliable rifle over the years.

The standard M1A has an overall length of 44 inches and is a true battle rifle weighing in at 10.7lbs loaded. The M1A’s barrel length is 22 inches allowing it a long sight radius and having an effective range out to 500 yards. My standard M1A features a wood stock that I actually replaced with a surplus M14 stock to give it a more authentic look, as the surplus replacement has the selector switch cutout (since the M1A is semi-auto only and did not need a selector). Also, the M1A is featured with beautiful Parkerized finish making it capable of withstanding harsh elements. Most standard M1A’s are equipped with a flash hider but mine has a muzzle break making it a featureless rifle and legally compliant in the State of California. The M1A comes with one 10 round magazine, but like the original M14, can be fed with 20 round magazines if legally acquired. The M1A has a “rock in” magazine that is similar to the AK’s meaning that the operator has to insert the magazine at an angle to confirm it is fully seated.  The M1A retains the same safety as an M1 Garand that is located within the trigger guard. The standard M1A is reported to have a military two-stage trigger pull with a weight of about 6lbs, I found the trigger to be extremely crisp and has a consistent pull.  The M1A’s front and rear sight are very similar to its predecessor M1 Garand. The M1A’s front sight is a simple military blade with protective wings to keeping it from possible damage. The rear sight on the M1A is a fine fully adjustable peep sight that aids in long-range iron sight shooting.

Over the years, I have fired over 2,000 rounds through the rifle with no issues whatsoever.  I have mostly shot surplus Malaysian 7.62 NATO (pictured below) through the rifle with no hiccups whatsoever. My rifle came zeroed from the factory and I have had no need to adjust the sights. The fine peep sights allows me to hit a man-sized steel target out to 250 yards with ease whenever I take this rifle out to the range. I have never officially shot groups with the M1A, but it is well known that the average M1A shots at about 2-3 MOA which is standard for most battle rifles.

One cool feature of the M1A is that the magazine can be loaded with five-round stripper clips.

Due to the configuration of the action, the M1A is certainly not the easiest rifle to mount a scope onto, but it definitely can be done and can be a truly capable performer at long distances. I decided to keep my M1A iron-sighted, but I have always had the itch to put an optic on one knowing that its performance would increase greatly and that I could possibly get it to look like an M21/M25 Sniper replica with a few more modifications. 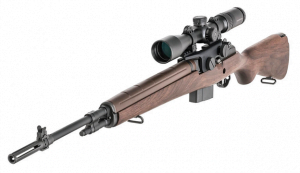 Applications of the M1A

Although it would be quite overpowered for a defensive rifle in the urban area where I live, I would trust my life with this rifle. Just the fact that the M1A is a reliable semi-automatic firearm with a detachable magazine chambered in 7.62/.308 makes it adequate for any tactical or defensive use.

The AR15 is obviously a lighter/handier platform than the M1A, but I wouldn’t hesitate to take my M1A hunting. The .308 Winchester is well known as a capable hunting round that can take down pretty much any big game in the United States or in North America.

In conclusion, the M1A is a great rifle that performs well and I would recommend it to anyone especially those who live in restrictive states where a modern sporting rifle may not be as easy to come by.

Teddy Kurtz is a collector of military firearms and GOC team member.

The post appeared first on Gun Owners of California.