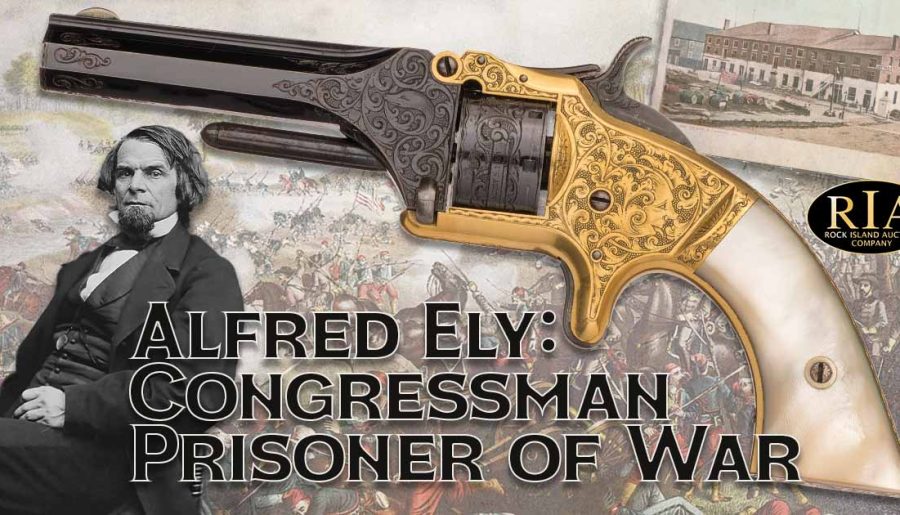 Congressman Alfred Ely helped recruit soldiers to the 13th New York Volunteers to fight in the Civil War. Concerned about their preparedness, he traveled to Virginia to see how they were doing.

His visit coincided with the Battle of Bull Run on July 21, 1861. A late rally by the Confederates left the Union army in retreat along with civilian spectators like Ely and other members of Congress. Trailing behind, Ely was captured and brought to an officer who asked him to identify himself.

“I am the Honorable Alfred Ely, Representative in Congress from New York,” Ely said.

The officer replied, “You white-livered Yankee,” the officer said. “You’re just the cuss I have been looking for!”

To the Confederates, Ely, a Republican from Rochester, was known an abolitionist and resented for it. He was taken to a tobacco warehouse converted to a prison in the Confederate capital of Richmond where he was held for more than five months.

A museum-quality, gold-plated Smith & Wesson Model 1 second issue revolver with engraving by Gustave Young, including Ely’s name on the back strap, will be available in Rock Island Auction Company’s Aug. 26-28 Premier Auction. 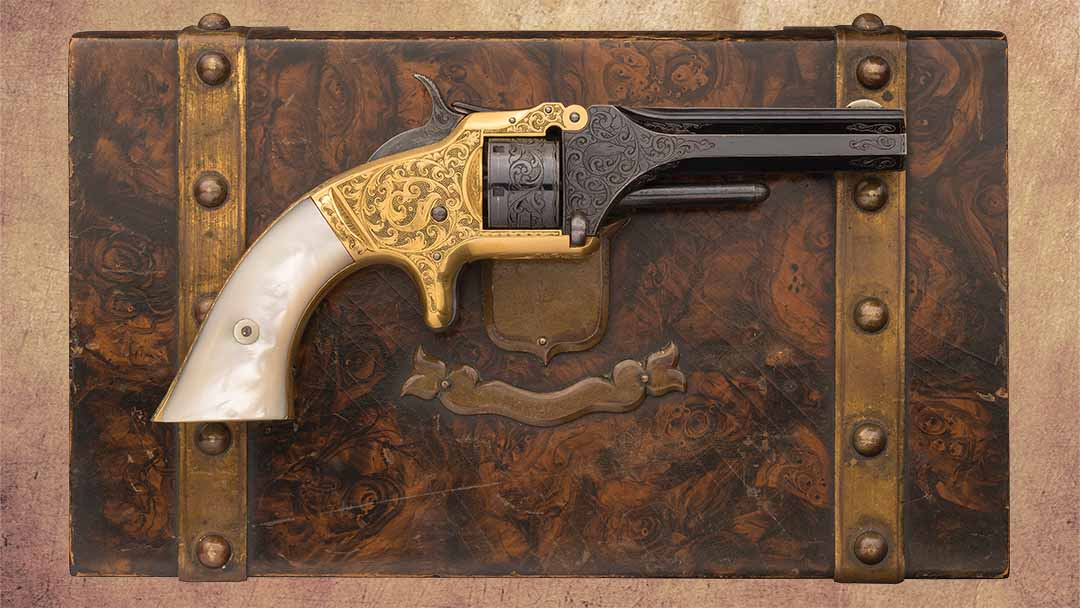 Before being taken to Libby Prison, Ely was brought in front of Col. Ellerbe Cash of South Carolina. Cash, enraged and likely drunk, wanted to kill the Rochester Congressman on the spot, declaring:

“God damn your white livered soul.  I’ll blow your brains out on the spot!”

Subordinates intervened to prevent Cash’s near-assassination of a U.S. Congressman. Ely was taken to the prison in Richmond.

Cash, who returned to the South Carolina militia in 1862, went on to fight and win the last duel in South Carolina in 1880 before the practice was outlawed. 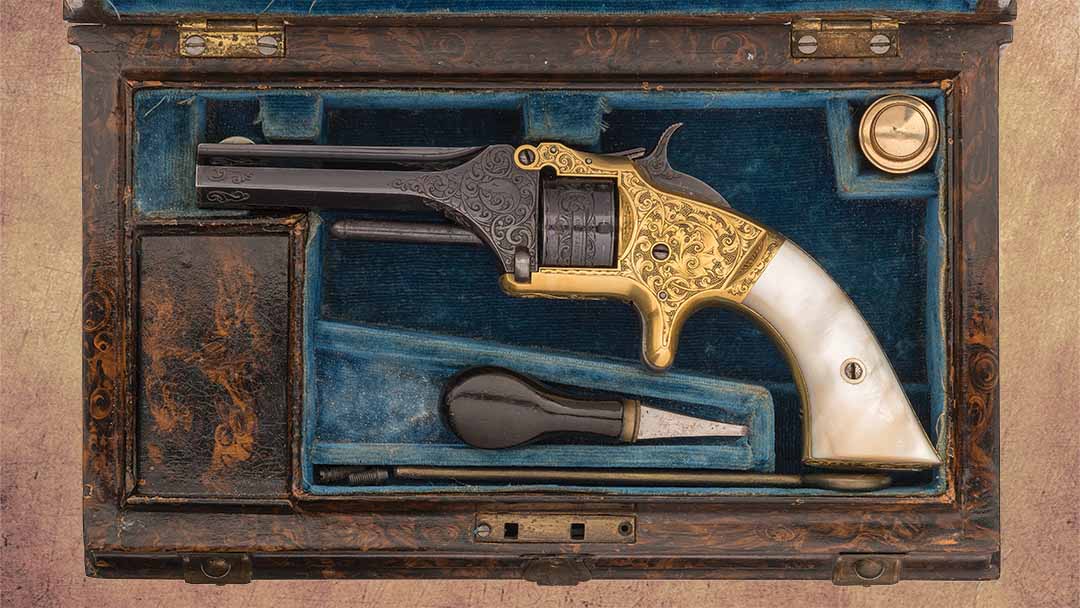 The Arrest of Charles James Faulkner

In Augst, less than a month after Ely’s capture, Charles James Faulkner, a Virginian who President James Buchanan had appointed as Minister to France, was arrested in Washington, D.C. as he prepared to return to his home in Martinsburg. He was accused of arranging arms sales for the Confederacy while in France. He was imprisoned at Fort Warren in Boston Harbor.

Faulkner served in the Virginia House of Delegates and the U.S. House of Representatives from 1851 to 1859 before his presidential appointment. A one-time Whig who flipped to the Democrats, he was a fervent Whig and slave owner. 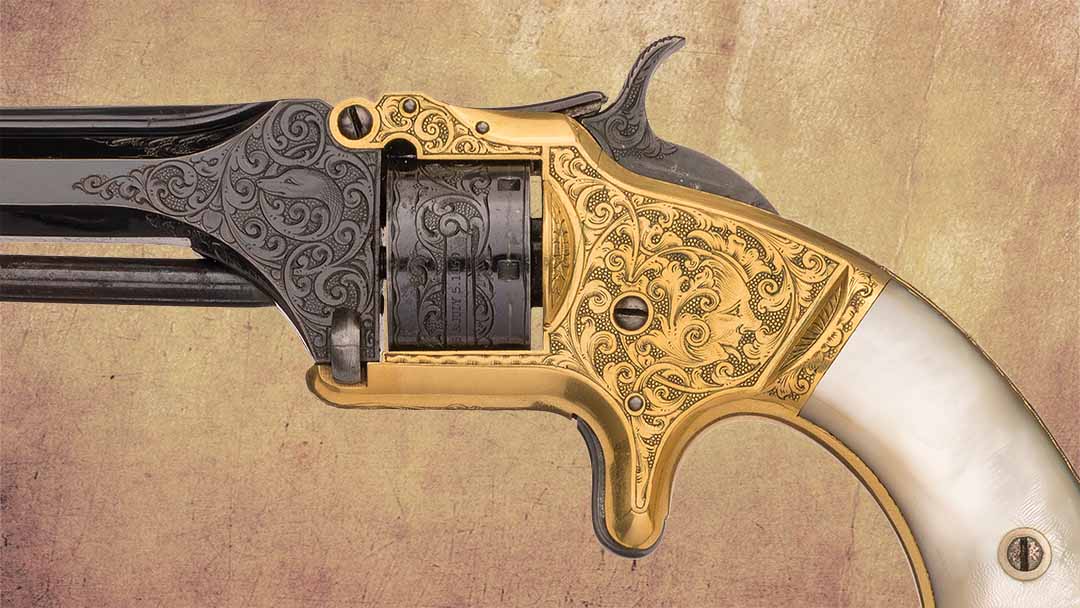 A closeup of the exquisite scrollwork on the Smith & Wesson Model 1 second issue revolver owned by U.S. Rep. Alfred Ely of New York. Ely was a Confederate prisoner of war for more than five months at the start of the Civil War.

Located in an isolated part of Richmond, Libby Prison had running water but few other amenities. It had no bunks and wooden bars covered small windows open to the elements that overheated the building in the sweltering Virginia summers and offered frigid drafts in the winter.

Following Ely’s release, conditions worsened as prisoner exchanges slowed with both sides realizing they were in a war of attrition. Overcrowding was severe and food was in short supply. Portions of food provided by the Union for prisoners was often diverted to the Confederate army.

In February 1864, 109 Union officers escaped via a 60-foot tunnel with more than half reaching Union lines. Forty-eight were recaptured and two drowned in the nearby James River. 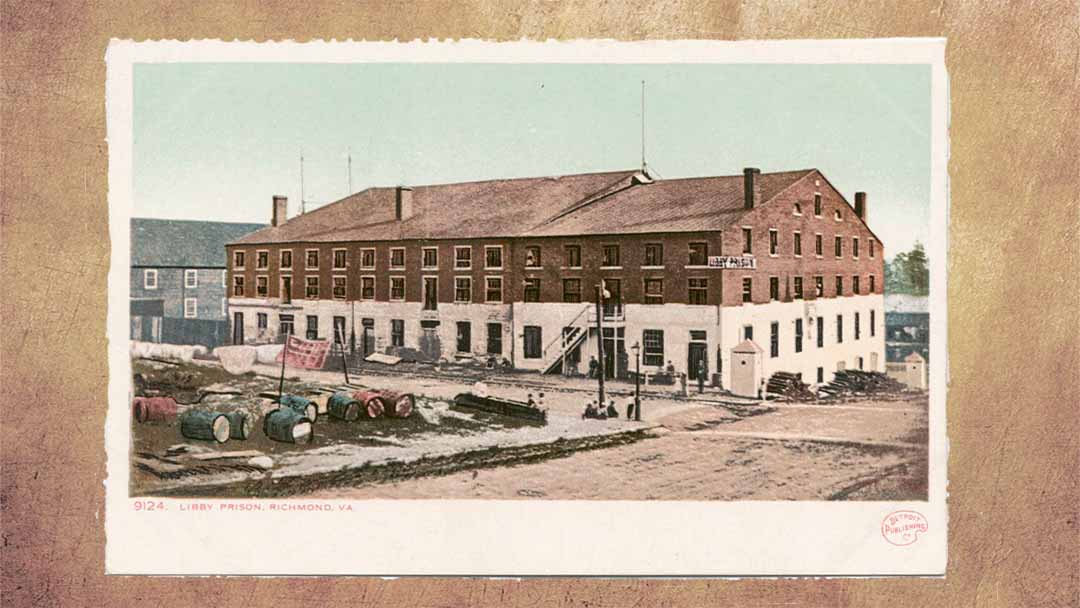 A postcard of Libby Prison in Richmond where U.S. Rep. Alfred Ely of New York was held as a prisoner of war for more than five months.

Still a Congressman, Ely handled constituent services as best he could. When a soldier who was the son of constituents back in Rochester was wounded at the Battle of Bull Run and later died in prison, Ely arranged for burial in a marked grave so that the remains could be repatriated back to New York later, which they eventually were.

Ely’s imprisonment was more comfortable than the Union soldiers and officers. He received three meals a day and had access to daily newspapers while visitors brought food, flowers, and comfort items. He was also allowed to leave the prison under escort.

He tended to prisoners during his incarceration, providing assistance out of his own pocket or helping to arrange releases or exchanges.

The Congressman founded the tongue-in-cheek Richmond Prison Association to relieve tedium by organizing debates, card games, singalongs, and other activities. An attorney, Ely wrote a letter to the Confederate Secretary of War, Judah Benjamin, a former Congressional colleague, asking what charge he was being held on, believing he was imprisoned illegally as a non-combatant. Benjamin replied tersely that he was a prisoner of war and no charge was necessary. 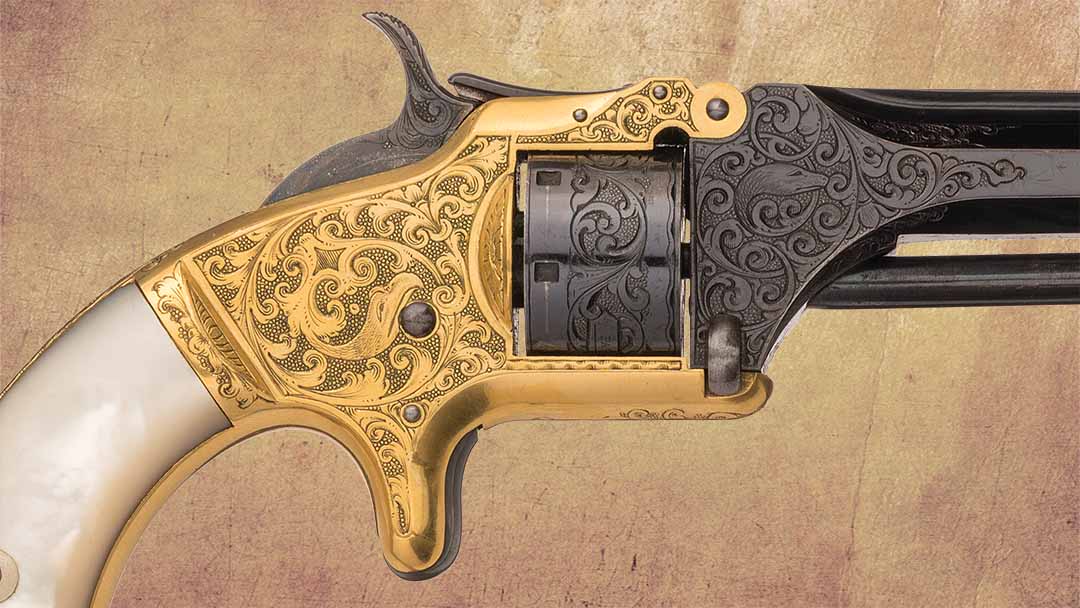 A closeup of the right side of the gold-plated Smith & Wesson Model 1 of Alfred Ely shows the exquisite engraving that includes an eagle behind the cylinder and another figure in front of it.

An unpleasant moment in Ely’s imprisonment was when he was forced to draw lots to determine which Union officers would be executed should the Union execute Confederate privateers on charges of piracy.

When the Civil War began, President Jefferson Davis warned that the Confederacy would authorize privateers, and provide letters of marque, authorizing the taking of vessels.

The first privateer out of Charleston Harbor on June 2, 1861 was the Savannah, a converted schooner with a single cannon that was fast and could handle merchant vessels. On its first day it captured a prize. Unfortunately, the second prize it attempted to capture was the U.S.S. Perry, a Union warship. It was captured and its men were taken to New York City.

Among the Union officers whose lot was drawn was Col. Paul Revere of the 20th Massachusetts and grandson of the Revolutionary War hero. Confederate President Jefferson Davis wrote directly to President Abraham Lincoln, after which Lincoln told the Navy not to press forward with piracy charges. The Union officers were later exchanged. 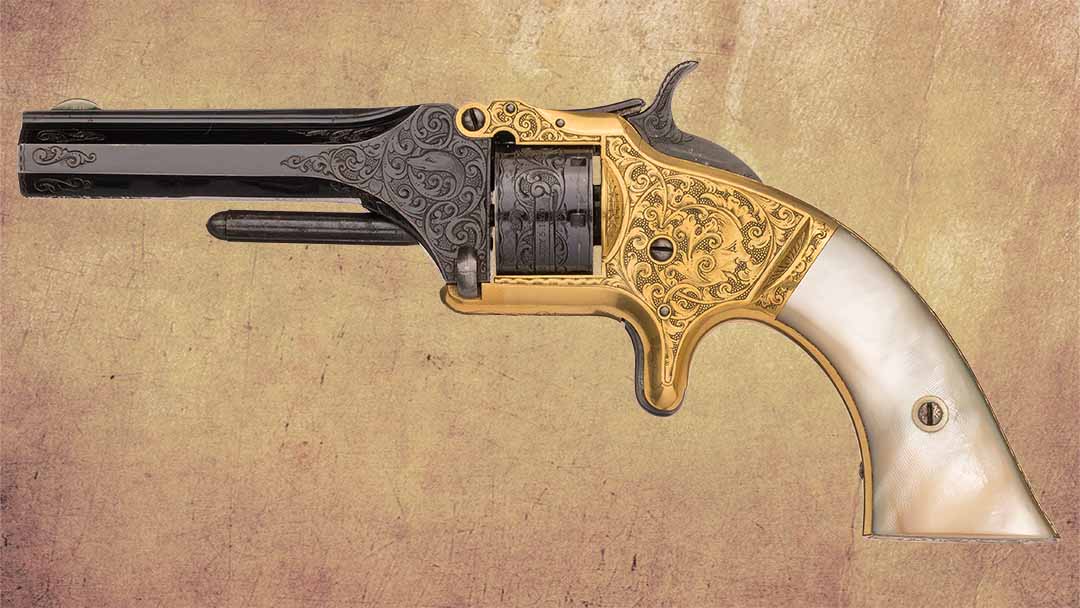 The Smith & Wesson Model 1 second issue of Alfred Ely, a New York Congressman held as a Confederate prisoner of war for more than five months.

Ely’s constituents wanted their Congressman back. They proposed trading Ely for Faulkner, still imprisoned at Fort Warren in Boston Harbor. Faulkner had been proposed in an earlier exchange that fell through.

On Dec. 5, 1861, Faulkner was granted a release on the condition he could gain Ely’s release within 20 days, otherwise Faulkner would return to prison. Faulkner traveled to Richmond and met with Confederate officials including Jefferson Davis. The two men didn’t see eye to eye on several issues, including the likelihood of overall Confederate victory, but Faulkner persuaded Davis to release the New York Congressman.

Ely met with Faulkner and Virginia governor John Letcher who said Faulkner “was worth a whole regiment of Elys.” In his meeting with Letcher, Ely zinged the governor by asking for the release of a regiment with him. Ely was released on Christmas Day 1861, the last day before Faulkner would’ve had to return to prison. 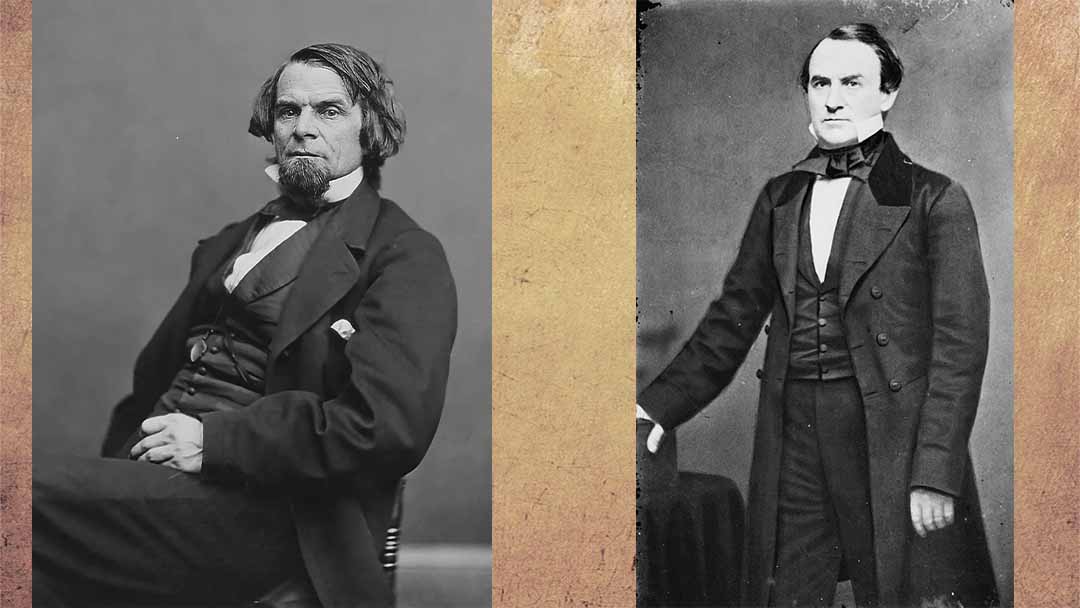 U.S. Rep. Alfred Ely, of New York, left, who was held as a prisoner of war in Richmond, Virginia for more than five months, and Charles James Faulkner, right, of Virginia, who was held by the Union in Boston. The men were traded for each other in December, 1861.

Ely did not get a new term in the 1862 election and returned to Rochester and his law practice. The journal he kept while in prison was published as propaganda and included a list of all the Union soldiers he knew to be in captivity. He died in 1892.

While Ely returned to civilian life, Faulkner, who had two sons serving in the Confederate army, accompanied Stonewall Jackson’s unit for a time, tasked with little more than writing up battle reports. He also spent the war practicing law in Appomattox County and speaking in opposition to secession. A key figure in re-writing the West Virginia constitution in 1874, Faulkner died in 1884. 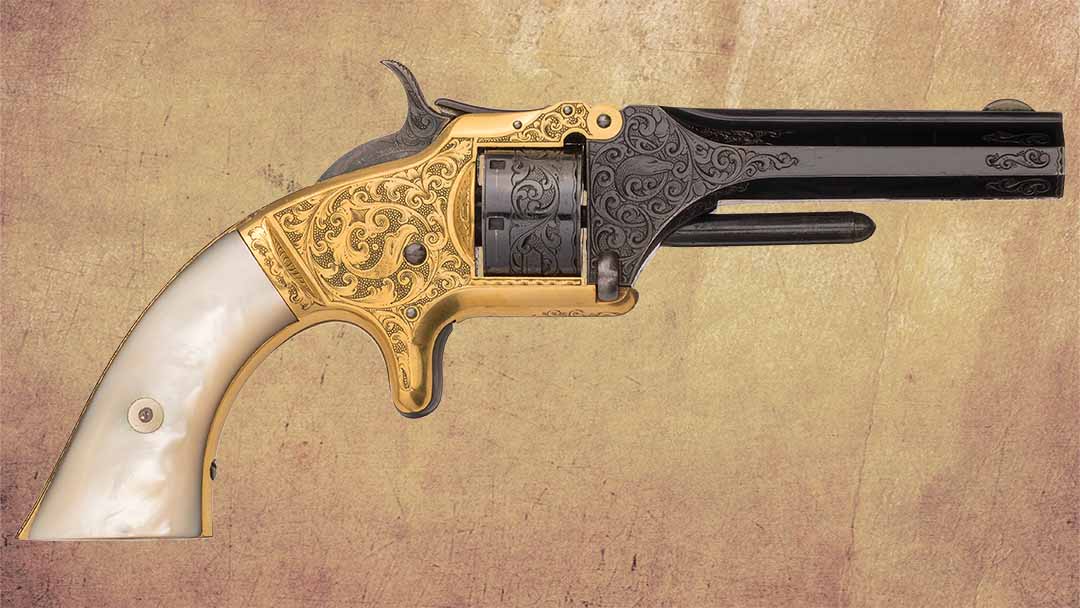 Ely’s blued and gold Model 1 second issue revolver, an ultra-rare piece, features Gustave Young’s fine exhibition quality scrollwork on a punch dot background with over 90 percent of the gun’s surface, including the hammer, that has scroll engraving. European style scrollwork on both sides of the barrel and frame include dog heads on the barrel, and a grotesque head on the frame’s left side and an eagle head on the frame’s right side. “Alfred Ely, Rochester/NY” is inscribed on the back strap.  Details on the presentation of this amazing firearm and its equally unusual and rare book style case is unknown.

This marvelous factory engraved revolver is something that is already of high interest to Smith & Wesson collectors, and is a link to a number of fascinating diplomatic exchanges between the Union and Confederacy in the early days of the Civil War. This highly desirable piece of American history and the Civil War will be available in Rock Island Auction Company’s Aug. 26-28 Premier Auction. 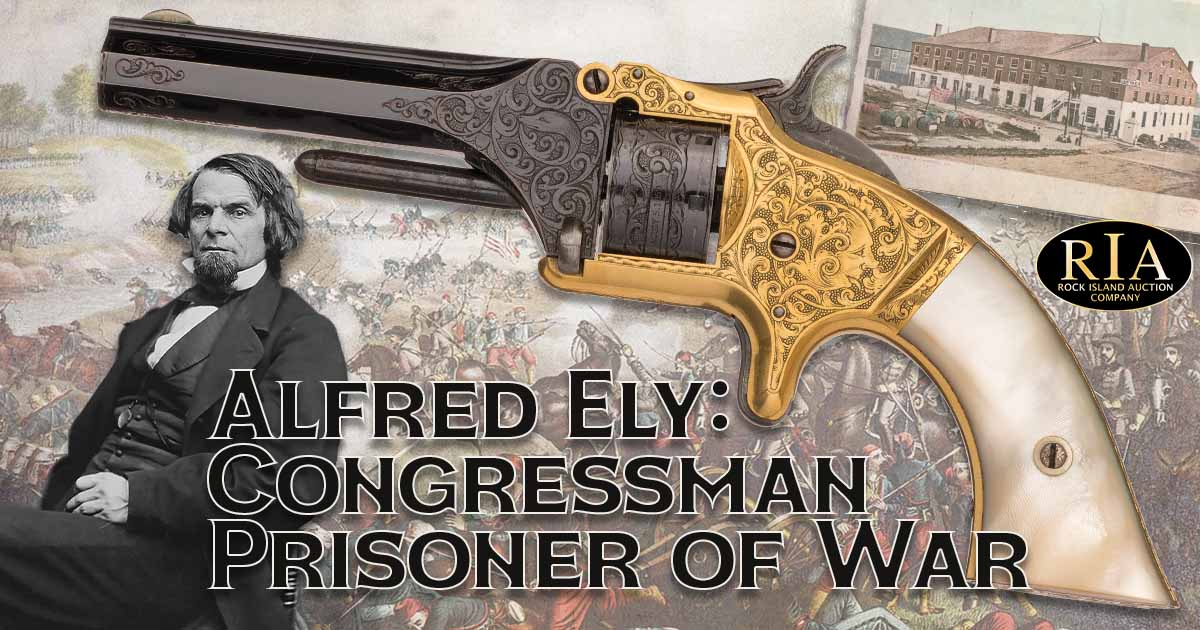