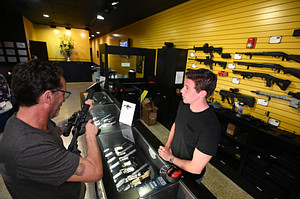 GOC’s Plans for Dealing with the Anti-Gunners in 2022

The media hates to report it.

But this is what happens when both retailers and the Department of Justice report that gun sales continue to skyrocket.  The pearl clutching is epic.

According the National Shooting Sports Foundation, the firearm industry trade association, the FBI’s National Instant Criminal Background Check System (NICS) processed 687,788 background checks during the week leading up to and including Black Friday. FBI’s NICS recorded 187,585 on Black Friday alone, ranking it among the Top 10 Highest Days for NICS checks and a .50 percent increase from Black Friday 2020 (186,645).

What’s great news for us is a nightmare for them.  But their predictable knee-jerk reaction to the rise in gun ownership is to equate it with the increase in crime.  This is not only lazy reporting, it’s lazy thinking.

Has crime gone up?  Of course it has.  One would have to be living under a rock not to notice; California has experienced a shocking 31% increase in homicide in 2020  but this certainly hasn’t been at the hands of lawful gun owners. It would be worth the time for the media and policy makers to dig deeper and instead consider the impact of a significantly reduced police presence (criminals like this), the elimination of cash bail (they like this, too), and early prisoner releases due to COVID (what’s not for them to like here).  These are also some terrific reasons for any sane person to make the decision to buy a gun to protect themselves, their families and home.

The fact that the number of guns in the US population continues to escalate means that the Left is working overtime to stem what they consider a dangerous tide.  In fact, GOC can promise you that while California legislators are currently back home in their districts until they return to the Capitol in January, they are not twiddling their thumbs.  The anti-gun members have already put their squirrely heads together to devise some plan to make our lives uncomfortable – whether it’s doing a full-court press on the excise tax on guns and ammo or siphoning more money for the Department of Justice, or making another restrictive run on GRVO’s and mandatory dealer inspections.

The Capitol is a hot mess on many fronts – we still don’t know if or how we will be able to testify before committees or meet with legislators due to continuing COVID restrictions – plus, in their wisdom, the legislative leadership decided this is a fine time to remodel all offices and the majority of committee rooms in the Capitol (non-restored) annex.  However, in spite of these obstacles (plus the open hostility we face as 2nd Amendment advocates) we are going to switch things up next year and play some serious offense.    Given forthcoming 2A decisions by the Supreme Court, we think it’s the perfect time to actively force public discussions on guns in California.  GOC plans to actively pursue legislation addressing issues such as microstamping, ammo restrictions and magazine limitations.  Of course, we have no illusions that any such proposals will get to the governor’s desk let alone out of the first policy committee, but it will give us the opportunity to inform the legislature what we plan to pursue after the SCOTUS decision next year.

Plus – with the midterm elections right around the corner, we fully plan to engage our friends and new members of the gun owning community with a number of races in California.  Believe it or not, turning just a few seats in the Legislature could yield some positive results.  Stay tuned.