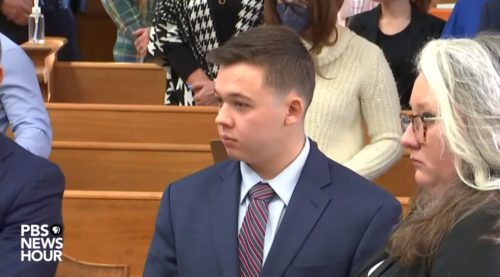 U.S.A. –-(AmmoLand.com)- The “not guilty” verdict for Kyle Rittenhouse by a jury of seven women and five men in Kenosha, Wisconsin Friday was declared an “affirmation of self-defense rights” by the founder of the Second Amendment Foundation.

But the ACLU, in a tweet already being blasted by various people including SAF’s Alan Gottlieb, didn’t agree. The ACLU tweeted: “Despite Kyle Rittenhouse’s conscious decision to travel across state lines and injure one person and take the lives of two people protesting the shooting of Jacob Blake by police, he was not held responsible for his actions.”

An even more forceful version of that tweet came from Shaadie Ali, interim executive director of the ACLU of Wisconsin:

“Despite Kyle Rittenhouse’s conscious decision to take the lives of two people protesting the shooting of Jacob Blake by police, he was not held responsible for his actions, something that is not surprising. But Kyle Rittenhouse isn’t the only one responsible for the deaths that night. The events in Kenosha stem from the deep roots of white supremacy in our society’s institutions. They underscore that the police do not protect communities of color in the same way they do white people.”

“While the ACLU should have been complaining about the conduct of prosecutors in the Rittenhouse case,” Gottlieb stated, “the organization instead is calling Rittenhouse a deliberate killer, perpetuating the myth that he deliberately crossed state lines to kill people. It is shocking for the ACLU, which has a long record of defending the rights of individuals against government prosecution to make such an outrageous statement.”

“Kyle Rittenhouse was acquitted by a jury of seven women and five men for defending himself against multiple attackers in the middle of a riot,” Gottlieb continued. “By being tried in court, he essentially was being held responsible for his actions, which the jury’s verdict clearly indicates were justified under the circumstances.

“We saw the same video evidence everyone else did,” Gottlieb added. “Any reasonable person who viewed the videos and heard the testimony would easily conclude Kyle Rittenhouse acted in self-defense.”

The verdict came after an intense week-long trial during which Rittenhouse broke down at least once on the stand. He also broke down upon hearing the jury’s verdict.

Outside the courthouse, protesters gathered to condemn the verdict with profanity-laced tirades against the court, Rittenhouse and the justice system. Had he been convicted, Rittenhouse would have faced a mandatory life sentence.

Not only was the ACLU evidently furious, but Democratic U.S. Rep Gwen Moore also declared, “A system that legitimizes vigilante murder is deeply broken,” according to WISN News.

Despite Kyle Rittenhouse’s conscious decision to travel across state lines and injure one person and take the lives of two people protesting the shooting of Jacob Blake by police, he was not held responsible for his actions.

Unfortunately, this is not surprising.

Wisconsin State Rep. Gordon Hintz (D-Oshkosh) issued a statement quoted by WISN in which he said the verdict “a green light for these types of people to instigate violence, only to use violence to escape accountability.”

Wisconsin Gov. Ton Evers, also a Democrat, issued a statement in which he asked for calm.

“No verdict will be able to bring back the lives of Anthony Huber and Joseph Rosenbaum, or heal Gaige Grosskreutz’s injuries,” Evers’ statement says, “just as no verdict can heal the wounds or trauma experienced by Jacob Blake and his family. No ruling today changes our reality in Wisconsin that we have work to do toward equity, accountability, and justice that communities across our state are demanding and deserve.”

There is no mention of the trauma Rittenhouse suffered by being attacked during the violent protest that rocked Kenosha that night in August 2020. Nor is there any mention of the alleged threats against the jurors.

“Justice was served in the acquittal of Kyle Rittenhouse, breathing new life into the presumption of innocence and upholding the fundamental principle of the right to self-defense,” Manning said. “The jury, which has been subject to death threats and intimidation, has proven they were willing to put that aside to uphold the American system of justice and the presumption of innocence. It is our prayer that they are left alone and able to return to their regular lives as unsung, anonymous heroes defending liberty and the justice system that is essential for the rule of law to prevail.

“The irresponsible major media companies and the President of the United States that each tried and convicted Rittenhouse based upon deliberate misinformation and libel should be held accountable by Mr. Rittenhouse using our nation’s tort system,” he added. “Let justice be done.”

And Republican U.S. Senator Ron Johnson tweeted, “I believe justice has been served in the Kyle Rittenhouse trial. I hope everyone can accept the verdict, remain peaceful, and let the community of Kenosha heal and rebuild.”

I believe justice has been served in the Kyle Rittenhouse trial. I hope everyone can accept the verdict, remain peaceful, and let the community of Kenosha heal and rebuild.

The Rittenhouse trial not only put the teen in the legal crosshairs, it could also have had a far-reaching impact on the use of self-defense by other citizens. SAF’s Gottlieb said a guilty verdict would have had “a chilling effect” on self-defense across the country.

Tensions remained high as 500 National Guard troops remained on standby in the event of violent protests in Kenosha.

The trial saw some remarkable events, including Judge Bruce Schroeder’s scathing criticisms of Prosecutor Thomas Binger more than once during the proceedings. Binger also has come under criticism for the way he handled Rittenhouse’s rifle during closing arguments, with a finger on the trigger and the muzzle aimed out into the court, or in the direction of the jury.

What’s next? There will be plenty of time to analyze the decision, and for some people to apologize for the way they portrayed Rittenhouse as a “white supremacist” and “vigilante,” including Joe Biden.

Whether any such apologies will come is doubtful.